Generous in spirit and nature, the Cayuse, Umatilla and Walla Walla tribes were documented in the Lewis and Clark journals to have greeted and assisted the travelers as they passed through on their way west.

Some 40 years later, the Oregon Trail cut through the heart of the tribes’ homelands, which stretched from the pine- and fir- forested Blue Mountains west to the Columbia River lowlands, and north beyond Washington’s Walla Walla Valley.

The Walla Walla and Umatilla are river peoples who lived along the Yakama, Umatilla and Walla Walla rivers and their confluences with the Columbia. The Cayuse lived along upper tributary valleys and in the Blue Mountains. They were known far and wide for their equestrian skills and for selectively breeding large herds of Cayuse horses, a stout, swift and agile breed well-suited for the steep and rocky terrain. All three tribes moved in a seasonal cycle, from sheltered winter villages to fishing sites to hunting, celebration and trading camps, sustained primarily by salmon, roots, berries, deer and elk.

In 1855 the Cayuse, Umatilla and Walla Walla tribes entered into a treaty with the U.S. government that ceded 6.4 million acres for a Umatilla Reservation that was less than half the 800 square miles promised. Later federal legislation further reduced the reservation to its current 172,000 acres located east and southeast of Pendleton. In the Treaty of 1855, the tribes reserved perpetual off-reservation rights to fish at their usual and accustomed sites, to trap, hunt and gather foods and medicines, and to pasture livestock on open and unclaimed lands. 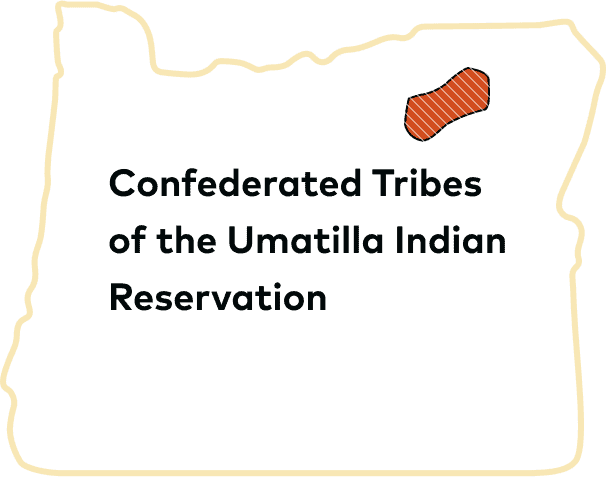 More to See and Do

Where Tribal Stories Come to Life

Steaks, Saddles and Rodeos in Eastern Oregon: The Legacy of Hamley

5 Things You May Not Know about Wildhorse Resort & Casino

Get Excited for a Family Vacation at Wildhorse

Crow’s Shadow Institute of the Arts

The Meanings Behind Oregon’s Place Names

Ready to hit the road? Bring our travel magazine along.