Hope and Healing Through Jingle Dancing in Oregon

Acosia Red Elk is a yoga teacher, a wellness advocate, a jingle dancer and an adventurer. “Movement is medicine,” she says. “Our emotions stay stuck if we can’t release them.”

An enrolled member of the Confederated Tribes of the Umatilla Indian Reservation, based near Pendleton in Eastern Oregon, Red Elk fell into a fire when she was 6 years old and spent three months in a hospital burn unit. That tragedy — as well as her experiences as a mixed-race person and the death of her father — began a trajectory of trauma and anger until powwow jingle dancing helped her channel it into a lifelong healing process.

“Powwow saved me,” she says. “It gave me a sense of identity and purpose, and permission to be proud of who I was as an Indigenous woman.”

Channeling Medicine as Dance at Powwows

Originating from a term for a healing ritual practiced by one of the Algonquian nations that hail from the Upper Midwest of the U. S. and Canada, powwows have always suggested a type of healing. These days, they celebrate Native American culture at gatherings where people from diverse Tribal backgrounds come together to dance, sing and honor their ancestral traditions.

Today powwows can be a single-day event or span multiple days, and performers and vendors sometimes come from as far as hundreds of miles away. Native and non-Native spectators are usually welcome to attend these events, as Tribal nations typically enjoy sharing the festivities and each unique Tribal culture. In Oregon, modern powwows are hosted by the state’s federally recognized Tribes and offer prize money in various dancing, singing and drumming categories.

The Healing Movement of Jingle Dancing

Although the dance began with the Ojibwe Tribe (based in the Midwest and Canada), the jingle dress has spread across Indian Country and is a regular feature at powwows. Jingle dancing gets its name from the rows of metal cones — often repurposed from tobacco-can lids — attached to the dresses, which make a distinct rustling sound as dancers move. Contemporary dancers have developed a style with more complex footwork and movements than old-style jingle dancers, who only move forward.

As a youth, Red Elk, who dances in the contemporary style, never envisioned that she’d be a world-famous jingle dancer. “My [jingle] dancing has created the life I have now. It became who I am,” she states.

Red Elk says that the meaning behind the jingle dress is particularly profound in the wake of COVID-19 as communities search for healing. The dance originated in the middle of another perilous time in history: the 1918 flu pandemic.

“The jingle dance is literally a healing dance,” she says. “At that time, a young girl from the Ojibwe Tribe was sick. Her father was a medicine man who went into ceremony and prayer, and he had a vision where he was brought into the Northern Lights by the spirit people. The gift he received from the lights was the gift of sound. The spirit people told him it would be created by women but didn’t tell him how.”

Red Elk says after the man came back, he told several women and they made four dresses of green, blue, yellow and white. Women in the community danced throughout the night at the longhouse. The next morning, the man’s daughter began to get better, along with others who had seen and heard the women dancing. 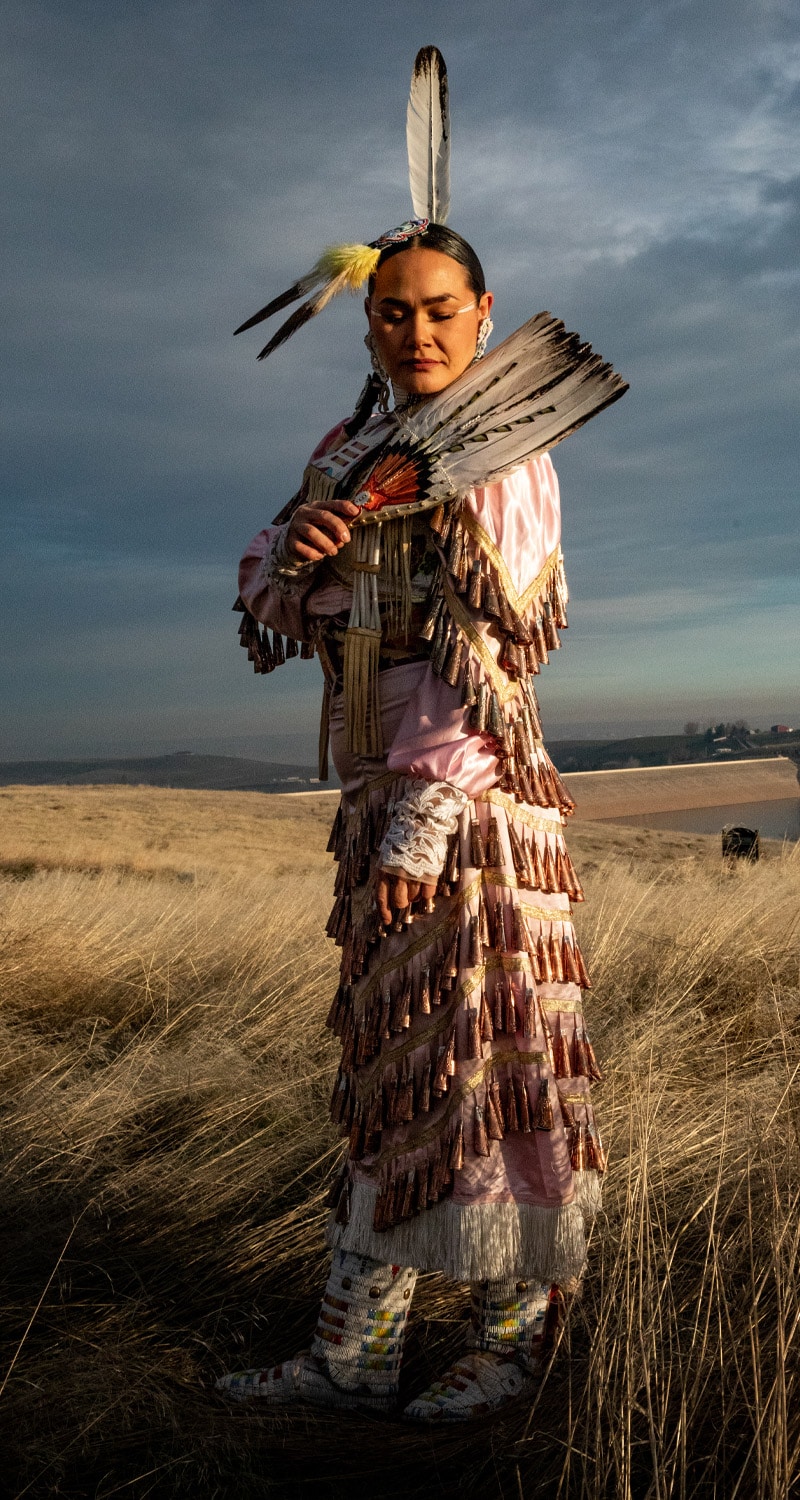 “This dress grew in popularity, and a lot of people got better from their sickness,” Red Elk says. “They took the jingle dance into other communities and it became a vessel for healing. The dance represents the hope of healing and the women as the carriers of medicine.”

During the more recent pandemic, this healing once again made news through the work of  Navajo Tribal members who started The Jingle Dress Project. In 2021 the group traveled throughout the United States and danced at iconic locations — including Haystack Rock in Cannon Beach — in their regalia decorated with beadwork, fur and hundreds of jingles. The mission is to give hope and healing to the world through this tradition, according to founder Eugene Tapahe.

Now that in-person events are being held again, the Jingle Dress Project dancers plan to attend various powwows and other cultural celebrations in the summer of 2022 and beyond.

Julie Johnson of Salem, a Fort McDermitt Paiute-Shoshone Tribal member, is friends with Red Elk and has been making jingle dresses for several years. Johnson began powwow dancing at 10, starting out as a fancy shawl dancer and moving into jingle dancing at 18. Her four daughters, enrolled members of the Burns Paiute Tribe of Southeast Oregon, also dance. She and Red Elk met at a powwow while sharing the floor as jingle-dress dancers.

“I loved the dress, the story and the meaning,” Johnson says. “It was all so beautiful. It’s a healing dress, a prayer dress shared from the Ojibwe people. I had a strong passion to learn more.”

A friend, a lifelong seamstress, created a dress for Johnson and explained the process, starting her on a journey to make her own jingle dresses. She still vividly remembers creating her first dress.

“I had bagfuls of tobacco-can lids in the house that people had given to me,” she recalls. “I wanted to prepare them each individually. I hand-rolled them, tied them and made that first dress.” She added satin applique designs to the dress to match her beaded moccasins, leggings and accessories.

“It was very special to me,” Johnson says. “I was so proud when I got it done. Ever since then, I’ve made a lot of jingle dresses. I loved creating designs and putting the colors together. I believe in the power of the dress and pray whenever I make one that the dress will bring good thoughts and feelings to whomever will be wearing it.”

From Jingle Dancing to Powwow Yoga

Red Elk’s jingle dancing has led to an adventurous life of competition and raising awareness for the form. For several years, she spent nearly every weekend at powwows in Oregon and across the country with her ex-husband, Paris, who was already a champion dancer. The two competed at more than 1,000 powwows. Red Elk’s graceful style and beautiful regalia have led to many awards, including the jingle-dance category at the prestigious Indian National Finals Powwow in 2016, and even a featured role in a pop music video where her jingles keep the beat.

Fused and intricately woven into her love of dancing is a passion for yoga. After taking a Buti class eight years ago, Red Elk realized yoga could be a powerful tool for healing and decided to become a certified instructor. “I wanted to make it more Indigenous and help heal my people,” she says. “So I reintroduced it as powwow yoga and included elements of dancing.”

Her powwow yoga business, 7GEN, has been popular with people from all over the world. Although all her classes are currently online, Red Elk also has her eye on a building in downtown Pendleton for a brick-and-mortar yoga practice with other Native teachers.

“Everything should be done with sustainability and the next seven generations in mind,” she says, speaking of the name she chose.

Red Elk plans to jingle dance competitively again after taking the past few years off to focus on her yoga practice amid the pandemic, when most large gatherings were canceled.

“I’m looking forward to getting back into powwows,” she says. “I’m really fortunate. I’m 42 and life has just begun. I’m doing all of the things I always fantasized about doing. All of it.”

Danielle Harrison
Danielle Harrison is a lifelong resident of the Northwest who writes about Native American Tribes for local and national press. She’s also covered city and state government for community newspapers in Oregon and Washington for more than 20 years. She lives in Salem and enjoys competing in triathlons, distance running, wine tasting, good coffee, kayaking, hiking and traveling.