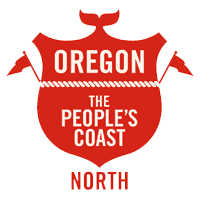 Oregon’s North Coast comes alive with outdoor and indoor festivities during the holidays. Decked with seasonal displays, downtown galleries and shops draw holiday shoppers. Even on brisk days, a ramble along the beach or riverfront stirs the soul. Of course, part of the fun this time of year is celebrating with friends over local seafood, pub fare and craft beer at the area’s many cozy taverns and cafes. Here are nine holiday traditions that make the North Coast such a special place to explore this season.

City Lights: From November 25 through December 17, local shops and galleries engage in a good-natured but spirited competition as to which businesses feature the most stunning and sparkling holiday displays. Check out Cannon Beach in Lights while you shop, and until December 18, you can vote for your favorites.

Showtime: Catch a holiday performance at the Coaster Theatre Playhouse, which mounts a holiday-related production each December. This year, from November 18 through December 23, the theater presents an adaptation of the 1940s Frank Capra classic Christmas movie “It’s a Wonderful Life.”  Then at the Playhouse on December 28, the acappella crooners, The Coats, come perform a laugh-filled holiday concert.

Holiday Feasts: December might just be the best month of the year for one of the convivial “dinner show” culinary classes at EVOO cooking school. Gather with fellow foodies around the kitchen for one of these entertaining and educational evenings, which culminates with a delicious meal. Popular shows include the Feast of 7 Fishes on Christmas Eve, a Haystack Holiday Dinner Show on December 28, and a New Year’s Eve Show and Party on December 31. Around the same time (Dec. 26–30), Cannon Beach holds its “Holiday Foods around the World” celebration, with three different restaurants each evening unveiling a special international menu.

Retail Revelry: The annual Seaside Boutique Artisan Fair  at the Seaside Civic and Convention Center presents a perfect opportunity to pick up thoughtful treasures for loved ones and friends. The festivities commence the day after Thanksgiving and continue that first Friday evening with a tree-lighting in the downtown pocket park, along with caroling, photo opps with Santa and the annual Parade of Lights.

Candy Crush: Whether you’re stocking up on stocking stuffers or craving a snack break, the Oregon Coast’s capital of candy and confection abound with opportunities for sweet treats. Pick up a pound of cranberry bark or peppermint fudge at Portland Fudge Company or a tasty dish of cinnamon or eggnog gelato at Sea Star Gelato. At Seaside Candyman, old-fashioned candy sticks make a colorful alternative to conventional candy canes — more than 30 flavors are available, including butterscotch twist, sour watermelon and green apple.

Winter Stroll: Venture out for a brisk walk along the nearly century-old Seaside Promenade, the 1.5-mile pedestrian way that affords walkers, joggers and cyclists stunning views of the dramatic winter surf. You can keep warm by picking up a gingerbread latte or hot cocoa at one of the many cafes near the Broadway Street entrance to “the Prom.”

Seasonal Ale: One of the state’s top spots for craft brewing, Astoria is a fine place to sample seasonal ales and rich stouts and porters during the cooler months. Start your brewery-hopping at Rogue Ales Public House, sampling the holiday-hoppy Santa’s Private Reserve red ale. Then enjoy a glass of Wet Dog Cafe & Brewery’s Poop Deck Porter, savoring its malty chocolate finish. Next up, Buoy Beer brews a fine selection of winter-spirited German and Eastern European ales, including the refreshing Czech Pils. At venerable Fort George Brewery, sip the velvety smooth Cavatica Stout. (If you’re back in Astoria on February 18, be sure to stop by Fort George for its Festival of Dark Arts: A Carnival of Stout.) And then continue your tour at the other breweries, pubs and tap rooms in town.

Art Events: For more than two decades, the Starving Artist Faire (Dec. 2-4) brings together about 50 vendors to the Astoria Armory, where you can browse one-of-a-kind, handmade arts and crafts, nibble on snacks from food vendors and enjoy the festive music. Another local favorite is downtown’s Second Saturday Art Walk, which returns this year on December 10. From 5 p.m. until 8 p.m., galleries and boutiques stay open late to serve holiday refreshments and host special exhibits.

Tour de Fort: Did you know Lewis and Clark’s intrepid Corps of Discovery spent Christmas in 1805 — the second year of their storied expedition — in present-day Astoria? You can tour a replica of their winter encampment, Fort Clatsop, at Lewis and Clark National Historical Park. If it’s a nice day, hike the easy and scenic 1.5-mile Netul Landing Trail, which leads from the fort to the spot where the explorers landed. Bald eagle sightings are not uncommon in winter.