Oregon Outback by Bicycle: A Ride to the Total Solar Eclipse

Like many lifelong Oregonians, I know as much about the region of the state east of the I-5 corridor as I do about the surface of the sun. This summer, I decided it was time to get to know a little more about both of those places. With a total solar eclipse passing over the country — and the best viewing predicted in the remotest parts of Eastern Oregon — I decided to get on my bicycle. From my home in Ashland, this would be a 400-mile journey. I packed my panniers, bought a good road map, and headed out for a 12-day adventure.

I start my first day out by catching a ride from Ashland to the top of the hill near Lake of the Woods. Ready to load on my bike rack are: a sleeping bag and pad, a tiny stove, food, and a few personal items. My hybrid road bike, Zepher, is definitely up for the challenge of the ride ahead. Most important, my phone is always ready to grab so I can capture my adventure on digital film. 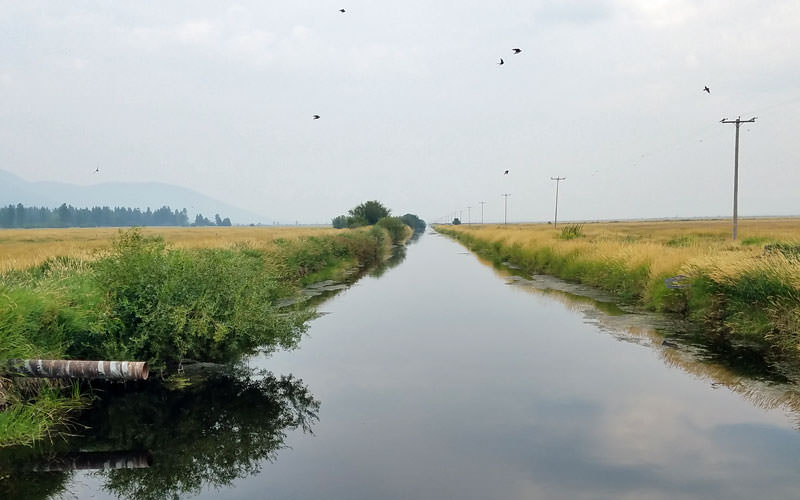 After a thrilling descent into Klamath County, I am eager to explore the wetlands. The Upper Klamath National Wildlife Refuge contains 15,000 acres of marsh and open water. I take a detour off the highway through some canal roads to catch a glimpse. 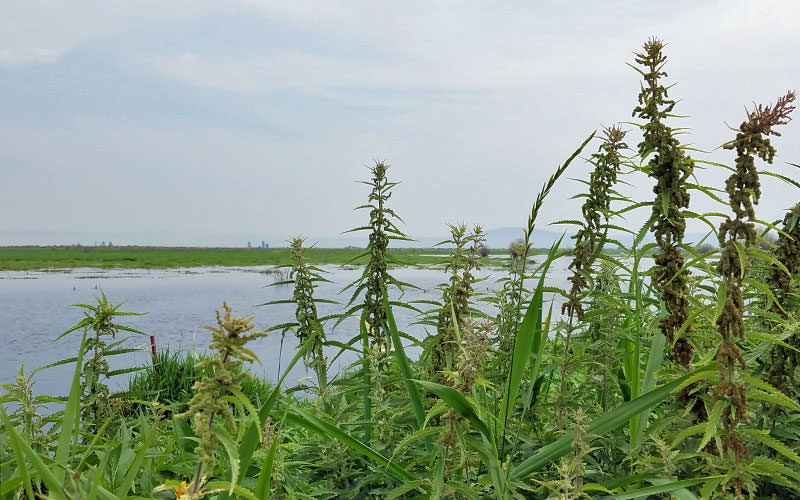 Stinging nettles and other plant life overtaking the single-track road ultimately sends me back to the highway, but I’ve caught a glimpse of the enchanting Klamath marshes and am determined to return someday — on a canoe.

The Sprague River drains the arid desert plateau south of the Fremont-Winema National Forest. Just a day’s bike ride from the bustling city of Klamath Falls, this corner of Oregon is wonderfully uninhabited and offers all of the beauty of the desert. 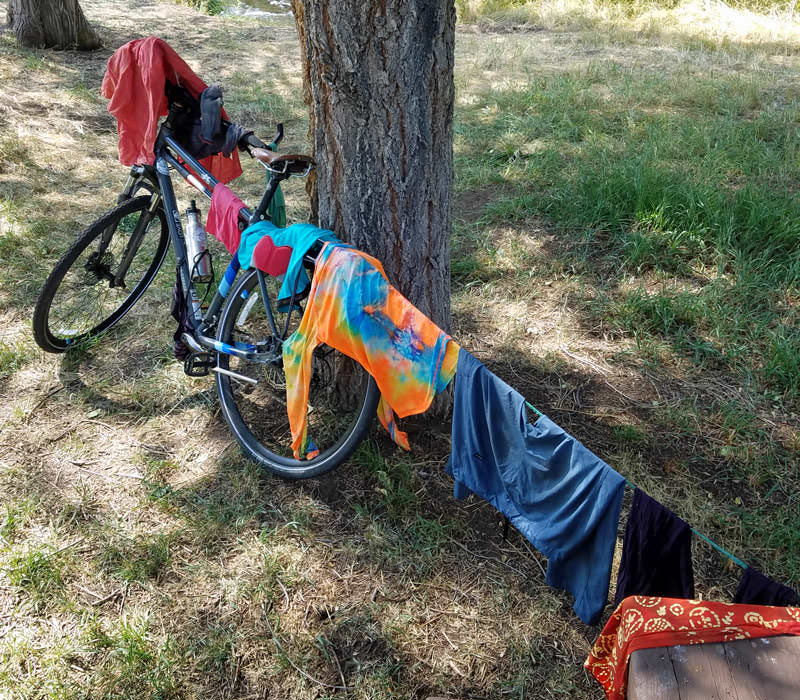 I take a rest day near the city of Bly (population: 500). The Sprague River National Forest Picnic Area is the perfect spot to rinse out my sweaty clothing and relax in the shade. Zephyr graciously doubles as a laundry line. In between dips in the water, I explore the surrounding cliff sides and find petroglyphs left behind by ancient peoples who once hunted here. 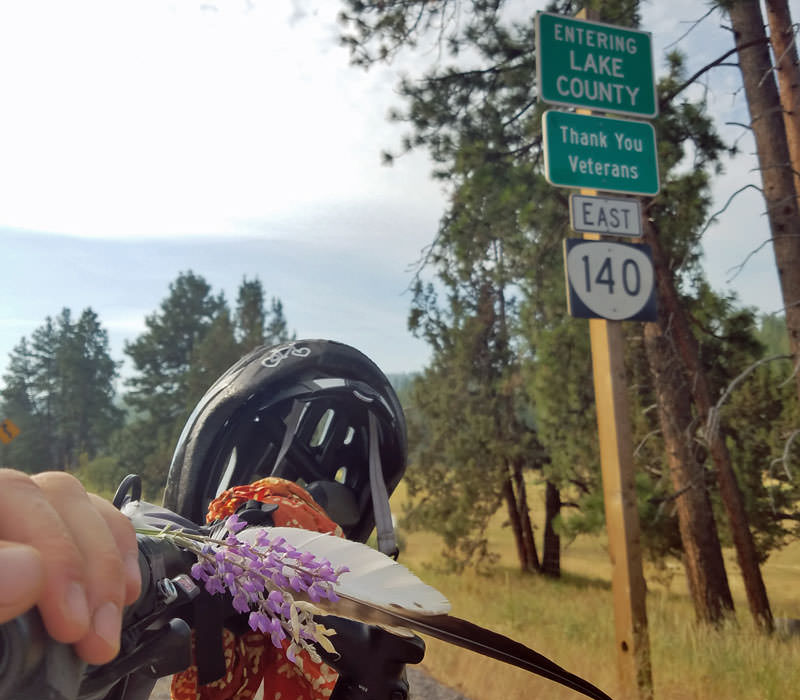 After four days of easy riding, I’ve completed my first county (Klamath) and cross the line into Lake County. A hawk feather happens upon my path and Zephyr graciously accepts the gift, along with some purple lupine that grows abundantly along the roadside. 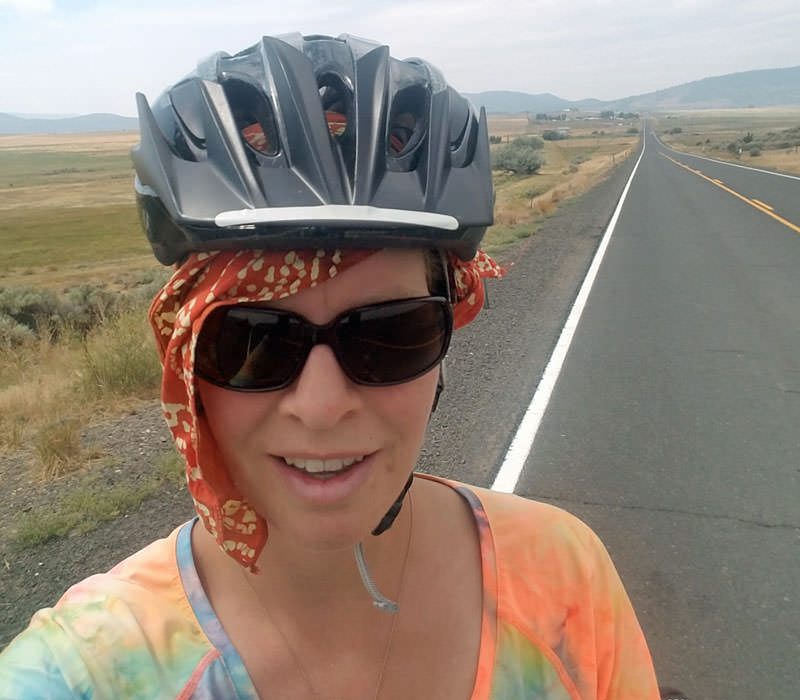 The ride to the city of Lakeview is my first day without shade. I improvise with a handkerchief and thank the weather gods that the temperatures have been in the low 80’s. Also, Highway 140 has been blissfully quiet. I find shapes in the clouds and hills, watch hawks and eagles whirl in the thermals above the grasslands, and feel incredibly lucky to be alive. 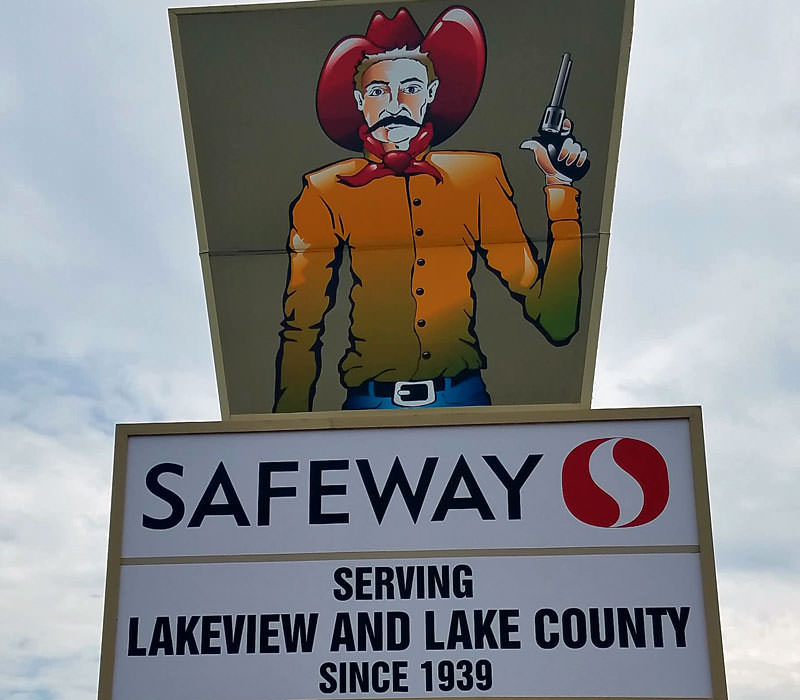 The lone ranger seems to be the icon of every town in the West. I wonder when the image will evolve to female on a two-wheeled human-powered machine? The first real grocery store on my route was sorely needed. Now I have jerky, energy bars and carbs to last me the next six days. 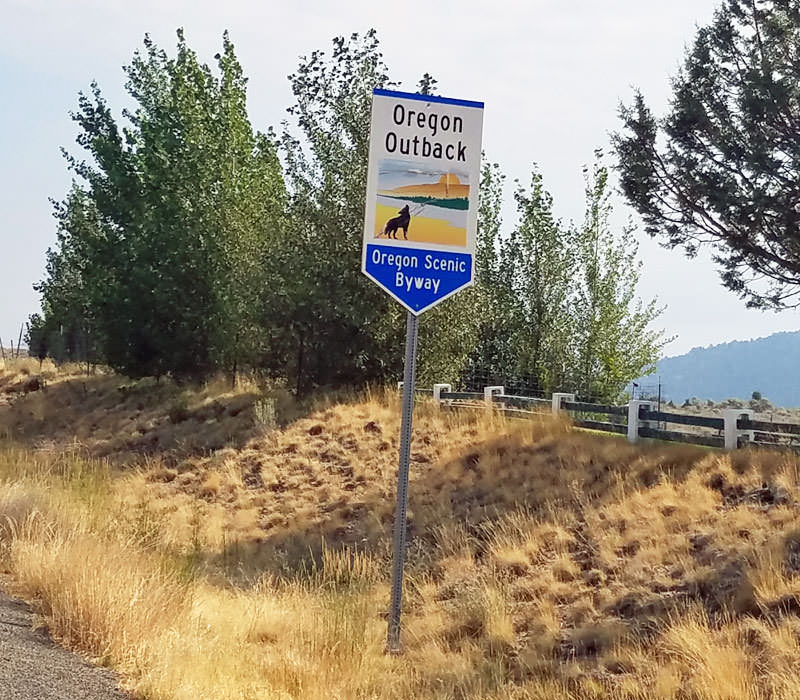 Heading north on Highway 395 out of Lakeview, the signage informs me that I’ve officially entered the Oregon Outback. Big trucks, bigger hats, and a whole lot of open space. I pack extra water and layer on the sunscreen.

Lake County is not named for its present-day bodies of water but ancient lakebeds that define the landscape. Here, Abert Rim — a remnant of prehistoric lava flows — juts up above the hayfields. Beyond it is Lake Abert, a small alkaline lake occupying a small portion of what was once an inland sea.

At the turnoff to Highway 31, which will take me on a three-day detour around Summer Lake, I stop for lunch. A man emerges from a nearby house to offer me vegetables from his garden. I gladly accept. Fresh produce is a rarity out here in the desert and I’ll carry the extra weight if it means vegetable soup tonight!

I’d seen it on the map but hardly believed it could be true. Sure enough, just past the little town of Paisley, is a gem of a hot springs on the edge of the Summer Lake Playa. I grab a tent spot with a wooden spool for a table, and head to the 1920’s-era bathhouse to soak. After my first 50-mile day, I’m ready! 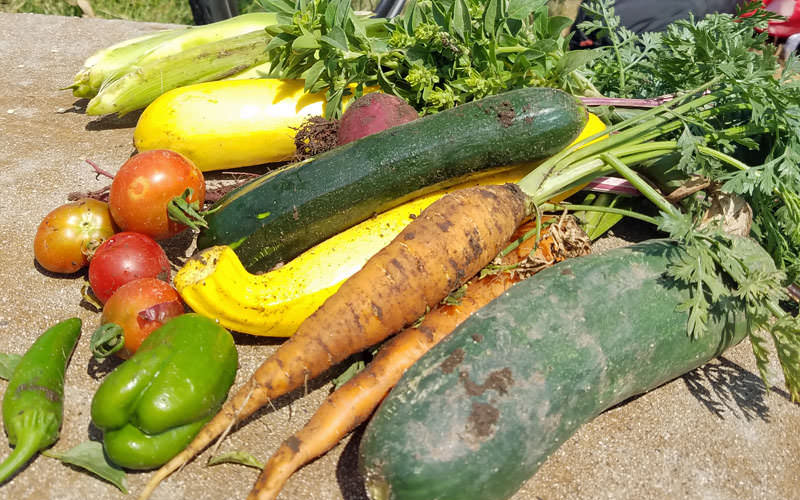 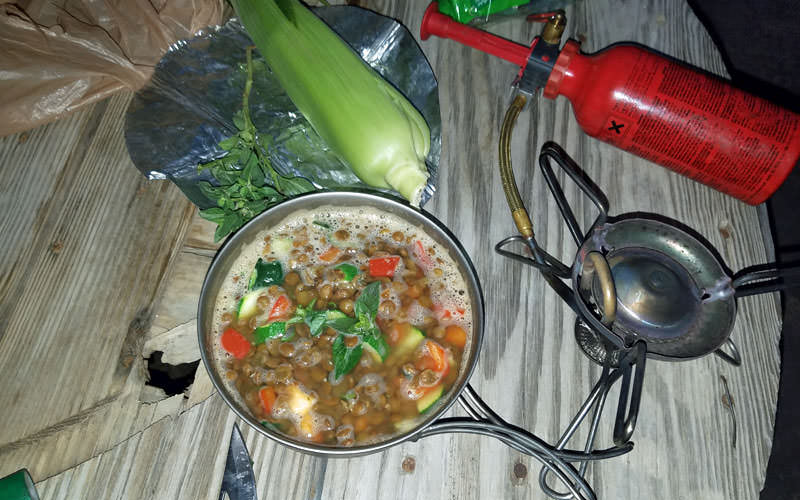 My dried lentil soup is greatly enhanced by the generous vegetable gardener’s corn, zucchini, carrots, peppers and even fresh basil for garnish. Being in a campground is also a new experience — travelers from every direction stop at Summer Lake Hot Springs to soak and camp under the bright starlight. I fall asleep to a neighbor’s gentle electronic music and wake up early to soak again. 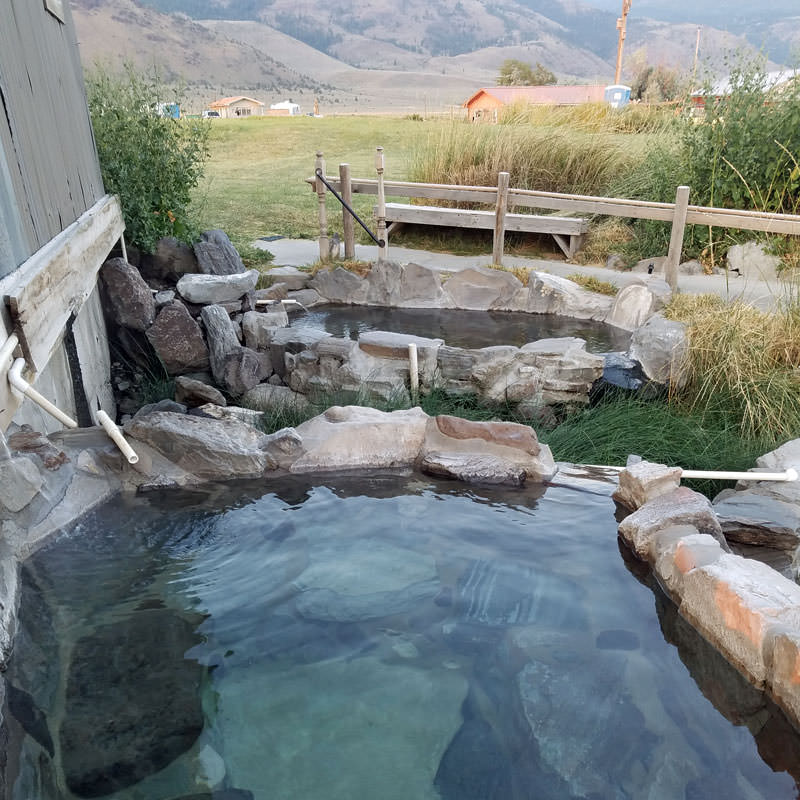 In the morning, the hot springs are even more delightful than the night before — and completely unoccupied.

With a warm start to a chilly morning, I am ready to take on some serious desert riding. 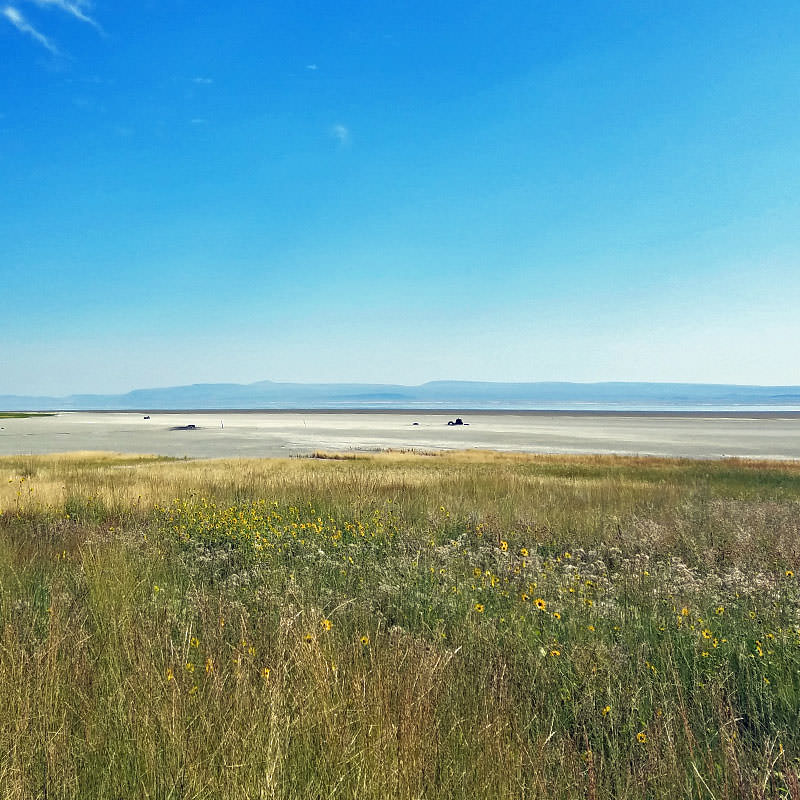 Far beyond the expanse of white dust, the silver water of Summer Lake shimmers like a mirage. Birds and insects enjoy it alone — these alkaline lakes are not conducive to fishing or water sports. The stark beauty draws me off my saddle and into the playa, but not for long. Although the day is not hot, I can feel the sun drying me like a leaf.

The ice-cold water of Ana Reservoir makes for a refreshing plunge, and I sleep well at the edge of the water — only later will I learn that the area is heavily populated by rattlesnakes! I drink as much as a I can from the artesian well before taking off in the morning. The next water stop is 40 miles away in the oddly named town of Christmas Valley. 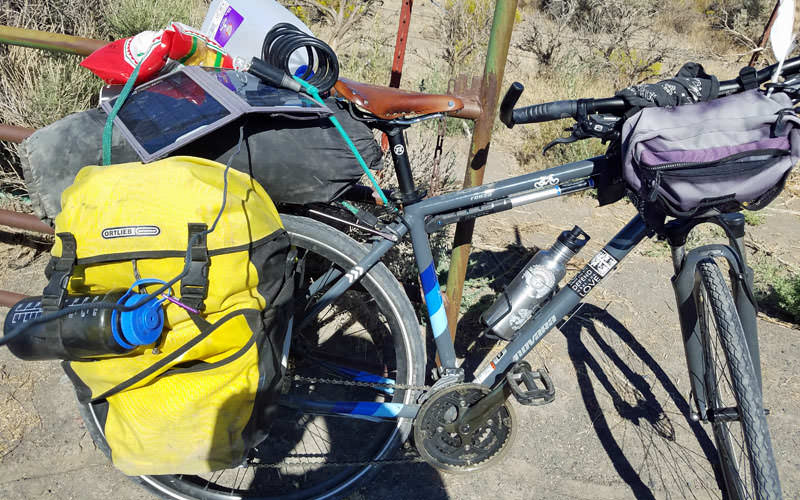 Now that I finally have my cycling legs on, I make it to Christmas Valley for a late lunch. The place doesn’t appeal to me for camping, yet the desert beyond has no refuge marked on the map. Also, my cell phone is low on batteries. Luckily, I brought my solar panel, and the gas station supplies me with a gallon of water. I decide to put my trust in the Oregon Outback and head out into the sagebrush.

Five hours later, I still have no idea where I’m going to camp, and attempting to hitch a ride on a passing truck — one every ten minutes or so — has proved unsuccessful. Also, I’m just about out of water. My dilemma is quickly forgotten the moment I come to this unexpected drop-off. After the rush of the ride down, an alfalfa farm appears, seemingly out of nowhere. The owners are extremely kind, offer me all the water I can drink, and a squishy place to pitch my tent in the grass. Although the sound of heavy machinery fills the night — it’s haying season! — I am so exhausted I sleep right through. 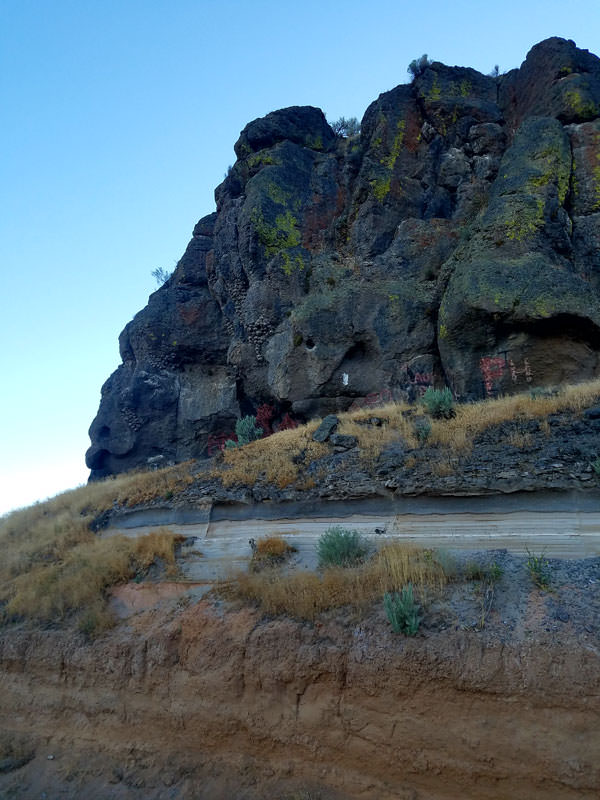 In the city of Burns, the RV parks are bursting with eclipse-seekers. I ride through, eager to reach the mountains after so much time in the desert. Here in the foothills of the Strawberry Mountain Range, birds build their own miniature shelters into the cliff face. 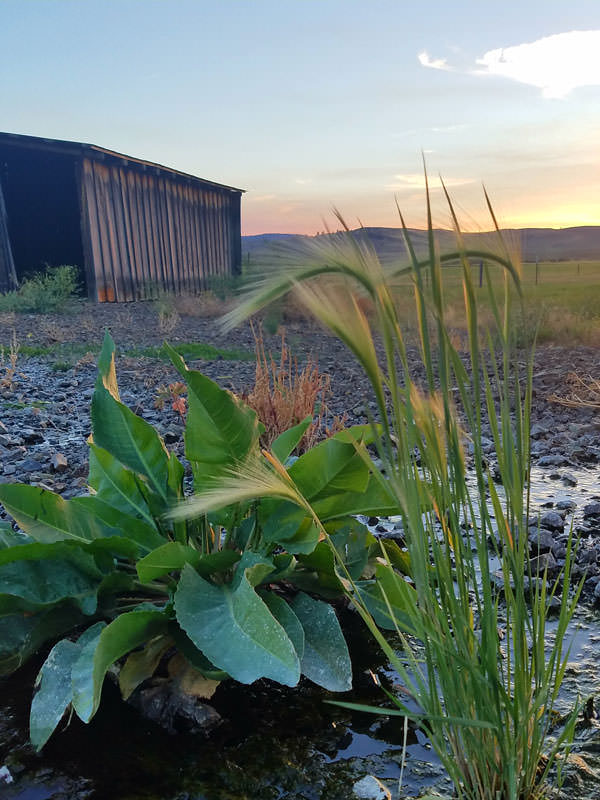 Back on Highway 395, just a few miles from the edge of the path of totality, I decide to slow down. Traffic is picking up and I have two more days until I meet with the rest of my party (traveling the fossil-fuel way).

This rest area, situated on the beautiful and expansive Silvies Valley Ranch, provides a wonderful place to relax and watch a final sunset before ending the solo leg of my journey.

Now that I’ve gained some elevation, the temperature at night drops down into the upper 30s. In the morning, the sun never felt so good, hitting me at a 90-degree angle from the horizon. 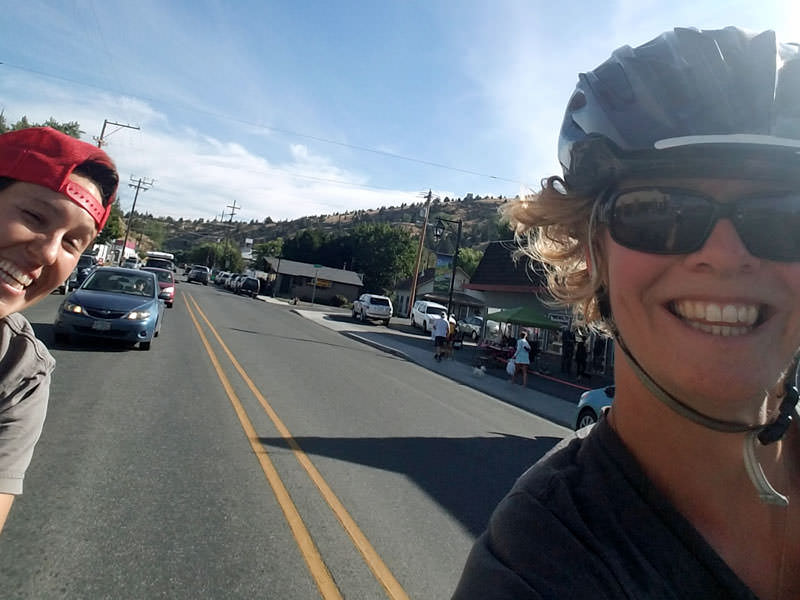 Near the small town of John Day, Zephyr and I get swooped up by my friends in a bittersweet moment. Fortunately, the cycling is not over. After we secure a campsite for the weekend, two of us get on bikes to check out the scene. 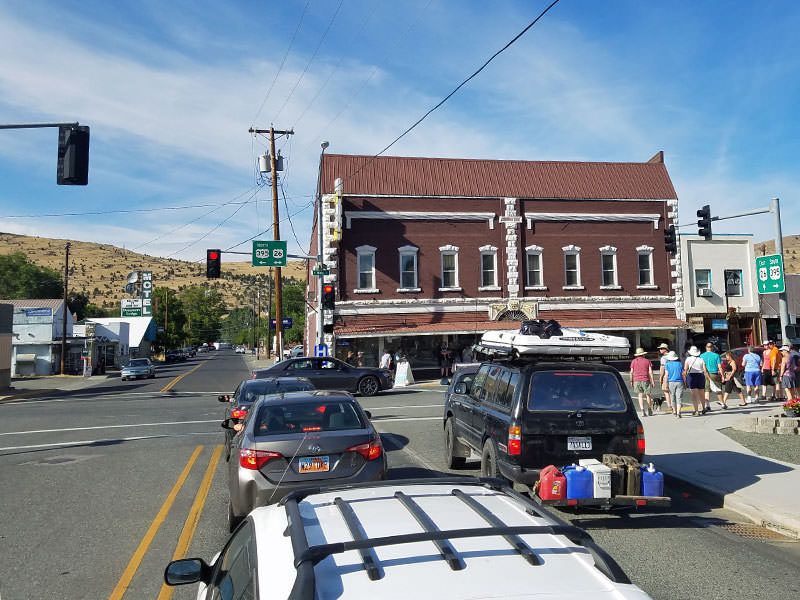 Founded after the discovery of gold on the nearby John Day River, the town that today supports a population of just a few hundred got a big boost as eclipse-seekers from around the world descended for a modern-day gold rush.

Despite dire media predictions about gridlocked traffic, everything was mellow leading up to the day of the eclipse on the 21st of August. The atmosphere was festival-like and t-shirt vendors, coffee stands and even a waffle truck appeared to support the ecstatic crowd.

Camped out in a nearby elementary school field, there wasn’t much to do but restore caloric balance in my system (aka, eat) and relax until the Big Event.

A fellow camper happened to be a former science teacher with a huge telescope. She happily shared the viewfinder with the gathered crowd, and smiles abounded as together we watched the face of the moon steadily move across the sun.

Although the science of eclipses is definitely exciting, the social studies aspect was the most fascinating part for me. Here, for one breathless moment, everyone in a fifty mile radius stopped what they were doing to look at the sky. Through our glasses, we saw the sun shrink down to a single sliver of light – and then it was gone. 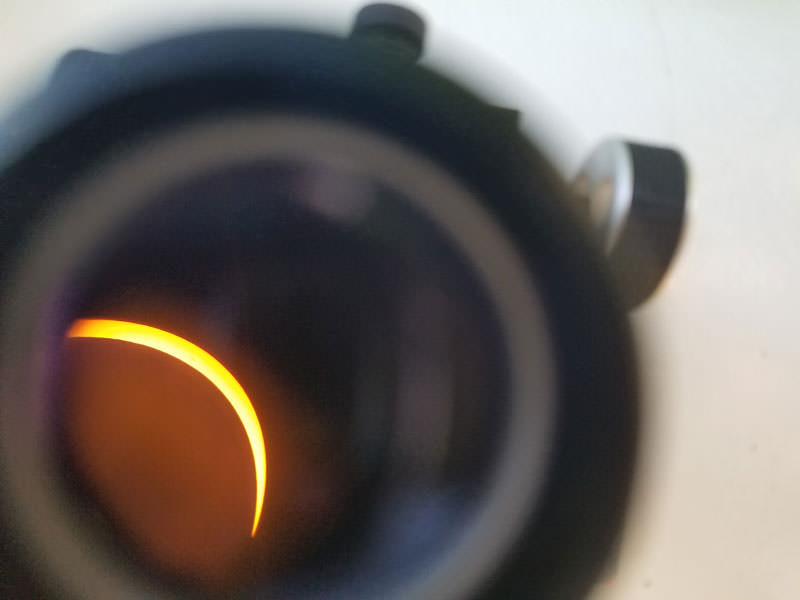 My solo bicycle trip was an epic adventure, one I’ll definitely seek again. I tested my personal limits, stared loneliness in the face, and got to know a part of the state that even some old-timers never set eyes on.

Viewing the eclipse, on the other hand, was an experience to be shared. As the surface of the sun — only visible when the brightly burning gas at the center is blocked out by the moon — was revealed, I was glad to be with friends I will remember this day with forever. 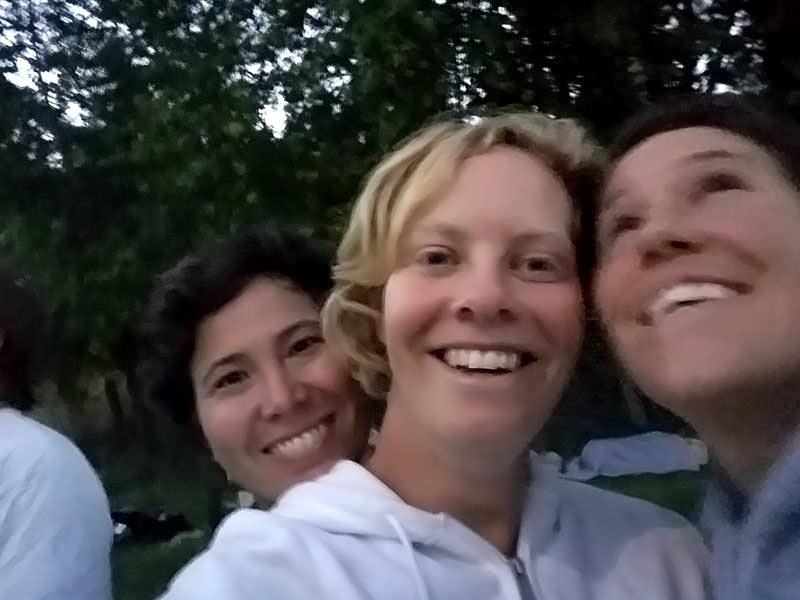 Tuula Rebhahn
Tuula Rebhahn is a writer, tiny-home builder, cyclist, cook and nature-watcher. She hails from the windy Oregon Coast, where she once worked on a crab fishing boat. Catch more of her stories — including more from the 2017 total solar eclipse — at tuula11.wordpress.com.

Are there campsites near the Painted Hills with restrooms?

Sounds like a really fun trip! The Painted Hills are one of my favorite places in Oregon, with a landscape that is both majestic and a little surreal when the sunlight hits it just right. One of the best campgrounds near the Painted Hills is the Clyde Holliday State Recreation Site, located between John Day…

James Stolen
Eastern Oregon Expert
Is any of the information on this page incorrect? Suggest an update
Ready to hit the road? Bring our travel magazine along.