A little tip for couples engaged to be wed: elope.

That’s not to say don’t have an elaborate wedding and invite all your family and friends. We are so glad that we did — eights months after getting married.

Our wedding was fun, really fun. But let’s be honest, I hardly talked to my husband, Mitch, at our wedding reception. And that’s fine, because we already celebrated our marriage together months before, privately, in Astoria.

On Friday, January 6, 2017, a freak snowstorm loomed over Portland and the surrounding areas. Mitch and I had a cocktail with lunch at Nel Centro and walked over to the Multnomah County Courthouse with a small group of friends. Our officiant happened to be the same judge who presided over my jury duty case. The whole ceremony wrapped up quicker than a sworn testimony.

Before we knew it we were married and on our way to the North Coast via US-30. Sprinkles of snow started dusting the road.

There’s no mistaking Astoria. You know when you’ve arrived. With every block, the town unravels in rolling hills, brightly painted Victorian houses and jagged piers. All of a sudden we were inside a port city from the Gilded Age.

At the southern edge of town, on the other side of the iconic Astoria-Megler Bridge, we found the Cannery Pier Hotel, secluded on its own pier like a secret oasis hiding in plain sight.

We checked in and beelined to our balcony as a pink sunset blanketed the sky. Yeah, it was pretty romantic. 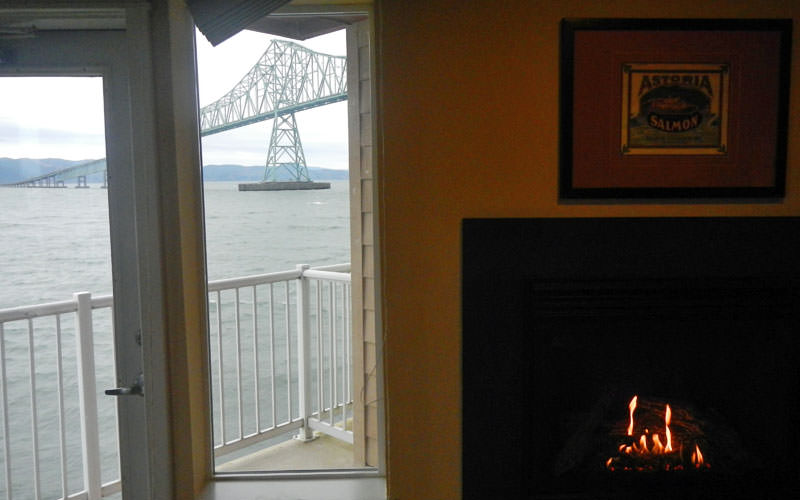 There are many reasons why the Cannery Pier is the perfect honeymoon destination. Every room has a spectacular view. There’s a nightly wine and cheese hour. The front desk has a solid collection of movies filmed in Astoria. You can get a schedule of passing ships. Guests can take complimentary rides to and from downtown in shiny classic cars.

Of course we scheduled a ride; the Silver Salmon Grille was calling our name. The restaurant was empty but came with good reviews. We snuggled in a large booth, giggling, drawing with crayons on paper tablecloth until our steaming plates of salmon and steak arrived.

On the return ride, our chauffeur brought the baby-blue Cadillac and took the long way back, describing in detail the history of Astoria. We learned it’s named after John Jacob Astor and pronounced “As-store-ee-a.”

That night we watched ships coming from thousands of miles away, drenched in moonlight, glide into the Columbia River. 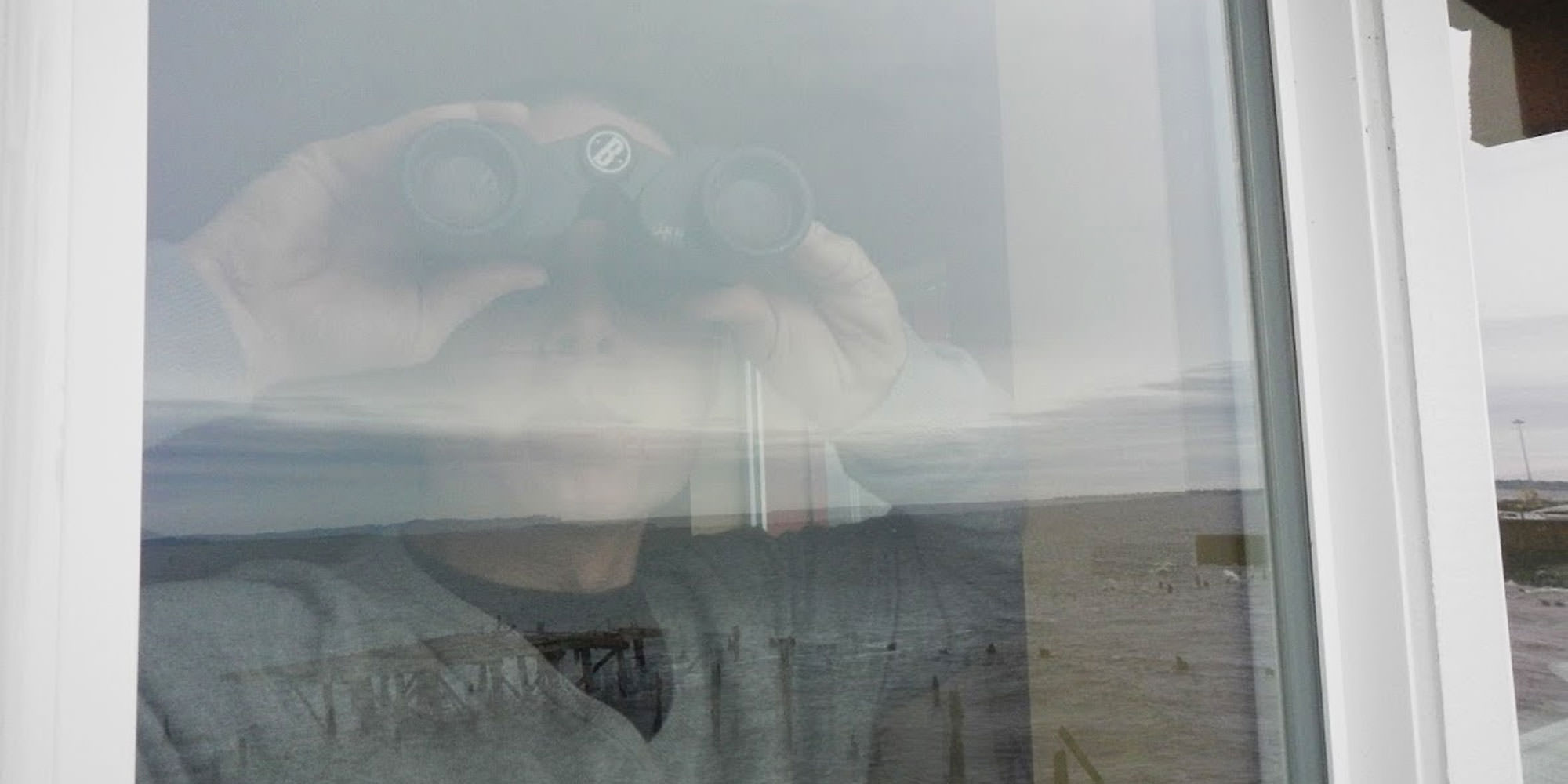 The next day we discovered January is part of Astoria’s shoulder season for tourism. All the better, we thought, although iconic restaurants like Bridgewater Bistro and Bowpicker coincidentally chose to close that week for vacation. Because of the small turnout, there was no wait for beers at Fort George Brewery. We ate more than our share of pastries at Blue Scorcher Bakery. We had long, meaningful conversations at the nonprofit thrift store. And the Oregon Film Museum was left all to ourselves, at least long enough to make several green-screen movie reenactments. (Even better, we still get to relive those bad-acting time capsules whenever we want because the Oregon Film Museum emailed us the final clips.) 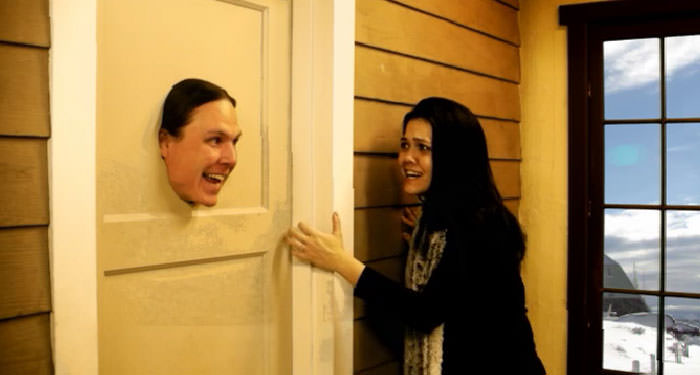 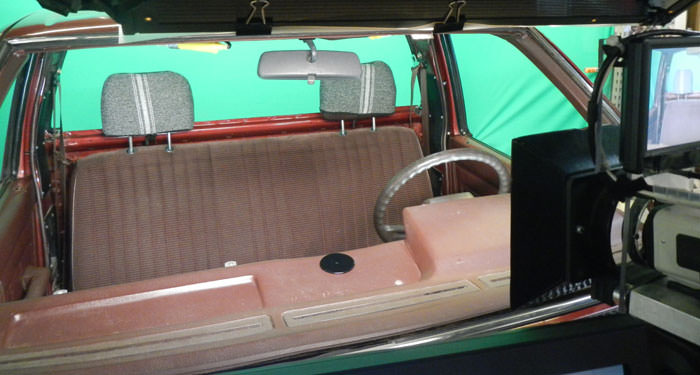 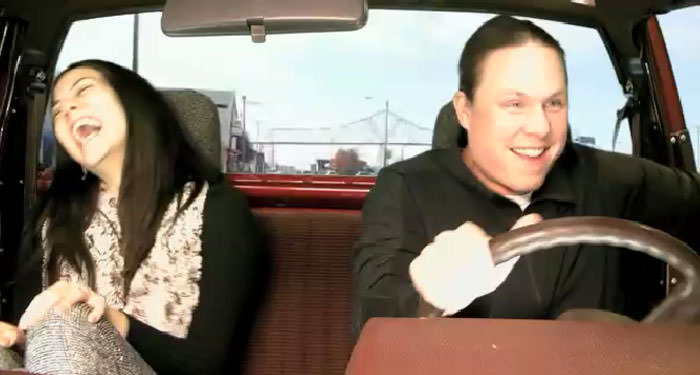 Overlooking town from the tallest hill, the Astoria Column was on our must-see list. On this early January day, snowflakes sprinkled over the grounds and there were none of the iconic paper airplanes to be seen. The near-empty parking lot added to the mystique of this historic 1926 column. The exterior depicted the modern history of Astoria, from Western discovery to the arrival of railroads. Inside we climbed 164 steps to the top, where we found another couple admiring the vast landscape and together we took a collective sigh of awe. 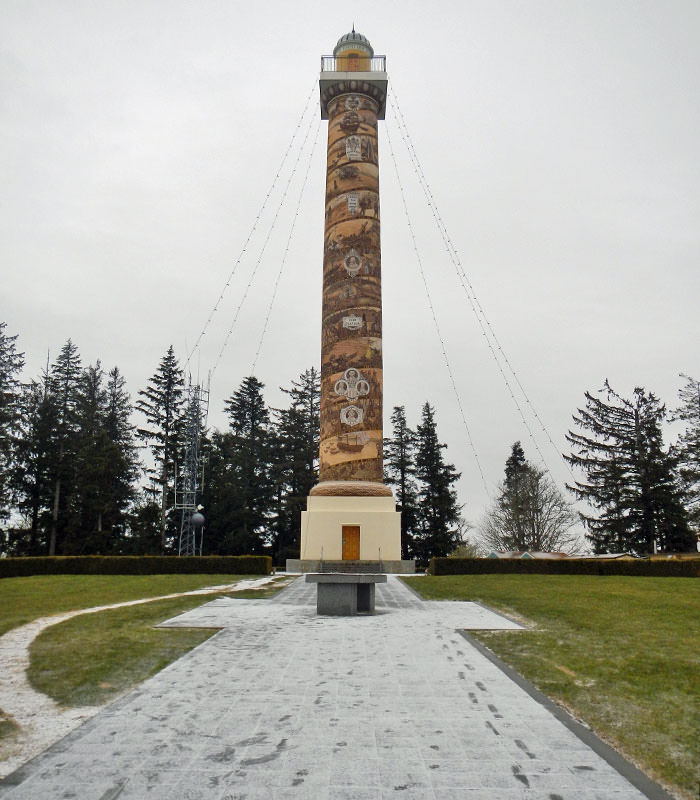 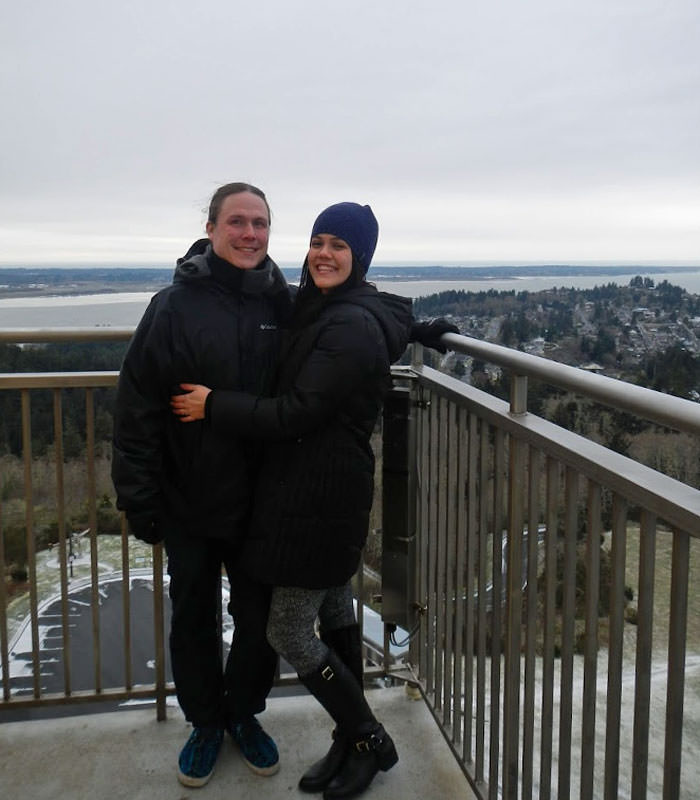 Well aware that Astoria was home to six (now seven) breweries, we visited two more: Rogue Ales and Buoy Beer. Both are located on piers, which was part of the allure, but Buoy has a glass floor where you can watch — and hear — seals lounging and barking on the rocks below. Laughter and tasting trays ensued. 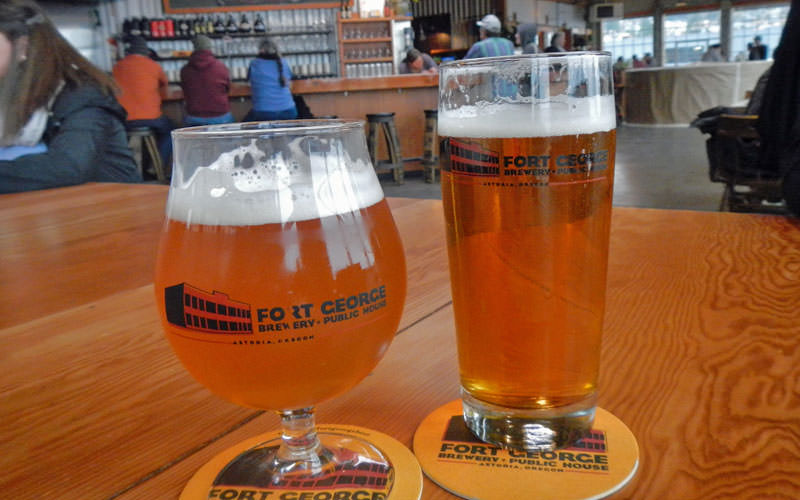 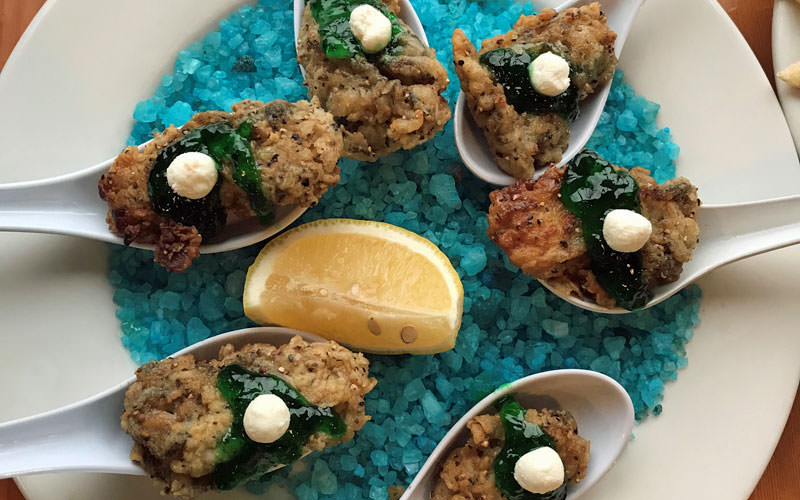 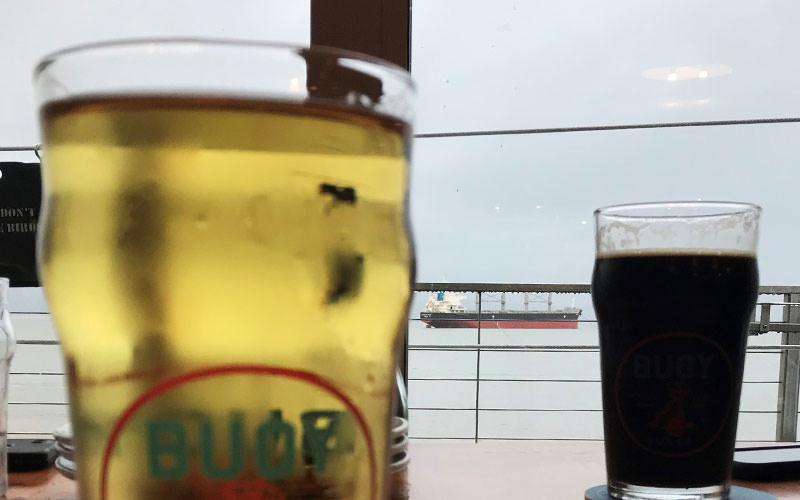 That night we ordered takeout from Fulio’s and enjoyed the view from our luxurious room one last time.

Day three of marriage was sentimental in that we had to check out of the Cannery Pier, our honeymoon home for the weekend. Fortunately we were able to easily distract ourselves by heading to Fort Stevens State Park in neighboring Warrenton.

The park’s main attraction, the shipwreck of Peter Iredale, is an eerie beacon on the beach, poking out from the slick, windswept sand with its jagged edges. Apparently the steel ship ran ashore in 1906 — another victim of the Columbia River bar’s “Graveyard of the Pacific” — and has rested here ever since. We explored the rusted skeleton in silence, moved by the relic’s historic significance.

Next we visited the park’s namesake military fort, which guarded the Columbia River from 1863 to 1947. The now-empty Fort Stevens is haunting in its own right and best toured with one arm locked around a loved one. 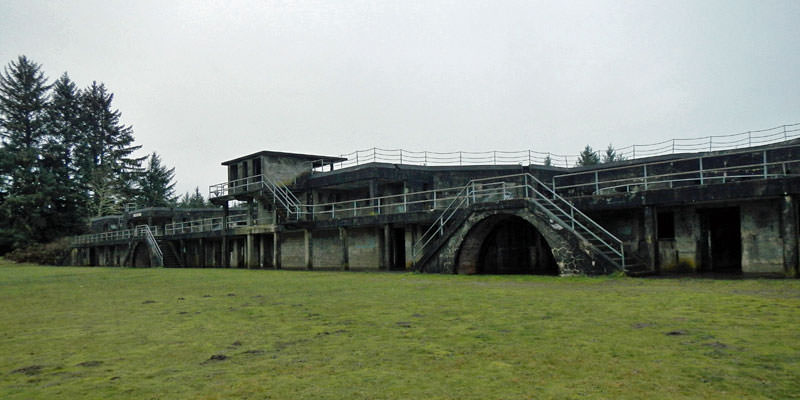 Observing artifacts of the past as we embarked on the first days of our future together seemed poetically appropriate. On the drive back to Portland, we envisioned returning to Astoria for anniversaries in the coming years, eventually bringing children and grandchildren who would make their own footprints in the sand and stare at these North Coast landmarks in the same wonder as we did. But for now it was just the two of us, blissful and even more in love after the perfect honeymoon in Astoria.

Where should we stay during our romantic honeymoon on the Coast?

There are 363 miles of options for romantic escapes on the Oregon Coast, so your decision will depend on the kind of experience you are after. I would list Cannon Beach, Yachats and Bandon as great small towns that offer options in luxurious resorts with views, intimate dining and beautiful scenic areas nearby. Cannon Beach,…