A Legacy of Oregon Pie

Tips on baking (or buying) your own, from a Willamette Valley Pie Company pie expert.
Emily Teel,  Author
Sponsored By 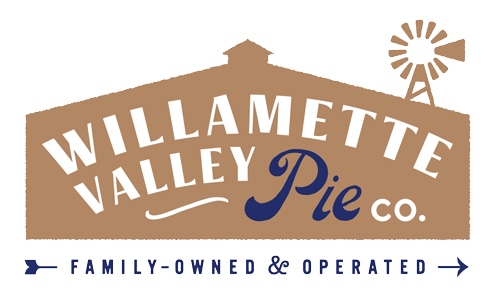 Willamette Valley Pie Company is a family-owned and farmer-operated business located in the cane berry capital of the world – Willamette Valley, Oregon.  Our hand-crafted pies and other desserts are made with all natural non-GMO ingredients, farm fresh fruit, and a whole lotta love!

Washington has apples, Georgia has peaches and Florida has oranges. But Oregon is the luckiest, because the Willamette Valley grows a bounty of fruit of all kinds. Come summer, local blueberries, marionberries, strawberries, raspberries, blackberries, cherries, and apples roll into farmers markets from nearby fields and orchards. One major destination for these fruits is Willamette Valley Pie Company in Salem.

Willamette Valley Pie Company started in 1999 as a family-operated cannery operation processing berries and other locally grown fruits. With so much beautiful produce, making pies was a natural progression for the business. Today it’s a production bakery that sends pies all across the country.

Marlene Gunderson, Willamette Valley Pie Company’s head of Research & Development, has been there since the beginning. She started part-time in 2000. Her first job? Assembling boxes while a handful of bakers rolled out dough for 60 pies per day, two days each week. Once filled with apples or marionberries, the unbaked pies headed to a local supermarket, where shoppers could buy them to bake fresh at home.

“One lady rolled tops and one lady [rolled] bottoms, on marble,” says Gunderson. When the holiday pie rush started just before Thanksgiving, Gunderson went full-time. She’s been helping the bakery grow ever since.

Pie assembly looks a little different at the Willamette Valley Pie Company now than it did 22 years ago. The pies became so popular it quickly became clear the company would have to expand. After building a larger production facility in Silverton, the original bakery became a welcoming spot for locals or tourists to grab coffee and a delicious slice of freshly baked pie.

Willamette Valley Pie Company pies and cobblers (both baked and frozen) are now sold at grocery stores throughout Oregon and in several other states. But it’s still possible to visit the place where it all started, just outside of Silverton.

The company’s first production bakery still welcomes guests daily, but now it’s more of a cafe than a bakery. Located in farmland between Salem and Silverton, it’s an ideal pit stop for those en route to a day of hiking and waterfall watching at Silver Falls State Park, window shopping in Silverton’s charming downtown or admiring the 80 acres of botanical displays at Oregon Garden. Its proximity to nearby fruit farms makes it the perfect spot for a post-picking lunch or a cooling treat after visiting nearby pick-your-own farms, including Meyer Peach Orchard, Fordyce Farm or, in autumn, True North Orchards.

Naturally, there’s pie aplenty, but Salem-area residents also visit for the cafe’s pastries, sandwiches, coffee drinks and in-season berry shortcakes served with clouds of whipped cream. In an area without many lunch options, it’s a pie oasis, and visiting the area makes it easy to see the connection between what the business does and the agricultural community it grew out of.

Top-Tier Ingredients Give Pies Their Flavor

High-quality fruit — the majority of which is grown in Oregon — is still the flavor foundation for their products, and they use fruit that has been frozen immediately after harvest to ensure year-round consistency of their products.

“We’ve been farm-to-table for 22 years. It was all geared toward the farm itself. That’s always been part of our philosophy. Supporting local farmers,” Gunderson says, “is part of who we are. We all have to work together, and our farmers are a huge contributing factor to our success.”

Another factor that makes these pies so good is how short the list of ingredients is. Even though the company has grown, the products are made in much the same way a home baker would. Pies are thickened with flour and sweetened with real sugar.

Though shortening has long been the reason for Willamette Valley Pie Company’s tender, crumbly pie crusts, they’re adding an all-butter crust to their menu in 2022. You can also enjoy mini pies, crisps, hand pies or old-fashioned cobbler (think cake batter with lots of juicy fruit), a version of Gunderson’s grandmother’s recipe.

How to Make a Great Pie Crust at Home

To make a great pie, says Gunderson, you need great pastry: “Crust makes the pie. If you have a really good filling and a terrible crust, it’s still a bad pie. Find a really good recipe and practice it. Put the dough together with the least manipulation possible. You’re not making bread, you’re making pie crust.”

One thing that helps, she says, is to keep everything cold. “Use ice water for the liquid,” she says. “I even put my flour and stuff in the fridge for a while.”

And if you don’t have the time or the inclination to roll out your own pastry, Willamette Valley Pie Company pies will be there for you in the freezer aisle. “There’s just something special about baking it at home,” says Gunderson. “The aroma wafting through the house and the fresh-baked pie cooling on the counter — it’s part of the whole experience.”

Emily Teel
Emily Teel is a senior food editor at Better Homes & Gardens magazine and writes about food through the lens of both agriculture and dining for outlets both local and national. A McMinnville resident and an avid forager, she loves exploring Oregon's hiking trails and pick-your-own farms in all seasons.