Ways to Help During Oregon Wildfires

Called a “once-in-a-generation event” by Oregon Gov. Kate Brown, the wildfires of September 2020 swept through more than 1 million acres of the state, forcing thousands to evacuate as winds spread embers and smoke through western Oregon. Gov. Brown said this could be the greatest loss of human lives and property due to wildfire in our state’s history.

Amid the devastation, Oregonians are banding together to support evacuees and rescue workers. Once again, residents are showing the strength of community during difficult times. From relief funds to donation drop-offs to offering your time and services, here are ways you can help Oregon’s wildfire-affected people and places right now.

Due to COVID-19 concerns, organizations like the American Red Cross are asking for monetary donations rather than material donations. (Though others are accepting material donations, too.) Relief funds allow for aid to be quickly distributed and adaptable to needs, plus your contribution is tax deductible.

The American Red Cross teamed up with news stations KGW8 (Portland) and KING-TV (Seattle) to launch the Northwest Response Fund in support of those affected by wildfires in Oregon and Washington. Donating is as easy as texting the word “relief” to 503-226-5088. American Red Cross is also collecting donations for its three Oregon chapters (Northwest, Southwest, and Central and Eastern), which you can give via the website, phone call, text or mail-in form.

The Salvation Army Cascade Division’s Emergency Disaster Services has been activated across Oregon, providing meals at seven evacuee locations across the state. You can help their efforts by donating online, by phone or via mail.

Rogue Credit Union created the Southern Oregon Fire Relief fund and will match up to $50,000 in relief donations for people impacted by the Almeda/Glendower and Obenchain fires. Donations will go to local nonprofits that are assisting impacted families and communities. Also in Southern Oregon, the United Way of Jackson County Fire Fund aims to support long-term recovery for families, covering direct expenses related to their losses. You can donate via PayPal, mailing a check (60 Hawthorne St., Medford, OR 97504) or making a deposit at any First Interstate Bank. Access Building Community is hosting a virtual food drive for Jackson County evacuees. Unete is collecting donations to support basic needs of displaced farm workers and immigrant families in Jackson County. For wine lovers, Rogue Valley Wine Country launched Rogue Valley Wine Country Cares, a community relief fundraiser featuring 22 wineries that will donate at least $10 of every bottle sold.

In the Willamette Valley, United Way of Lane County Wildfire Response Fund provides immediate assistance to local nonprofits that are assisting families and individuals who are impacted by the fires in Lane County.

The Benton County Wildfire Response lists donation opportunities, and you can pledge monetary support to It’s On Us Corvallis, which is distributing hot and nonperishable food to those affected by wildfires. Many businesses in Lane County are also donating proceeds from sales to local relief efforts.

In the Portland Region, the United Way of Columbia County established a wildfire relief fund to support those affected in Columbia County. Donations can be made at InRoads Credit Union.

The Oregon Community Foundation is accepting donations to its 2020 Community Rebuilding Fund, as well as listing other statewide relief efforts. Donations to the Oregon Food Bank Network goes to emergency supplies and support to local families, farmers and first responders.

To support those on the frontlines of the wildfires, donate to the Wildland Firefighter Foundation, which raising money to help injured firefighters and families of those killed in the line of duty. The Clackamas Emergency Service Foundation created a wildfire relief fund to support first responders and those impacted by wildfires in Clackamas County.

Donations to Keep Oregon Green will go to educating the public about wildfire prevention, with 100% of the money directed towards its outreach efforts and not operating costs.

Across the state, evacuation points have been designated at schools and fairgrounds. Many of them are in need of supplies such as bandages, storage bags, diapers, flathead shovels, sleeping bags, tents, walkers, wheelchairs, prepackaged food, toiletries, and new  or gently used clothes and shoes. Check ahead to see what supplies are most needed. Places that are collecting donations for evacuees include:

Volunteer Your Time and Services

Consider signing up to volunteer with the American Red Cross, which is helping evacuees at locations across the state. Right now the most urgent needs are for licensed health professionals, blood donor support, shelter support and virtual positions. The organization’s six blood banks in Oregon are also accepting donations.

Those with livestock experience and equipment can stay tuned to Facebook groups like Cowboy 911, Cowgirl 911, Linn County Livestock and Holiday Farm (McKenzie) Fire Animal Rescue (Lane Co) that are coordinating animal evacuation and assistance. There is still some capacity for livestock and farm animals at Oregon State Fairgrounds, Polk County Fairgrounds, Yamhill County Fairgrounds and Livestock County Commons in Newport. If you find a displaced pet, call the Oregon Humane Society at 503-585-5900.

The Oregon Voluntary Organizations Active in Disaster website lists verified disaster relief organizations to volunteer with or donate to, plus it hosts an interactive emergency resources map that indicates groups active in each affected county.

Stay Informed and Be Prepared

Avoid traveling outdoors in the Willamette Valley, Mt. Hood, Central Oregon Coast and Southern Oregon. Not only is the air quality at hazardous levels in some parts of the state but also many recreation site closures have been issued, including all access to Mt. Hood, Willamette and Siuslaw national forests. Oregon State Parks temporarily closed sites such as Milo McIver, Silver Falls, Detroit Lake, Devils Lake, Collier Memorial, Jackson F. Kimball and Fall Creek Reservoir. The Oregon Marine Board is also urging boaters to stay off waterways near areas where there are active fires.

Most importantly, follow directions from firefighters, local officials and emergency responders — if you are told to evacuate, do so immediately. Understand the different levels of evacuation:

Keep checking the latest updates about resources in your community. (See the list below.) Be sure you’ve opted for emergency text alerts on your mobile phone. 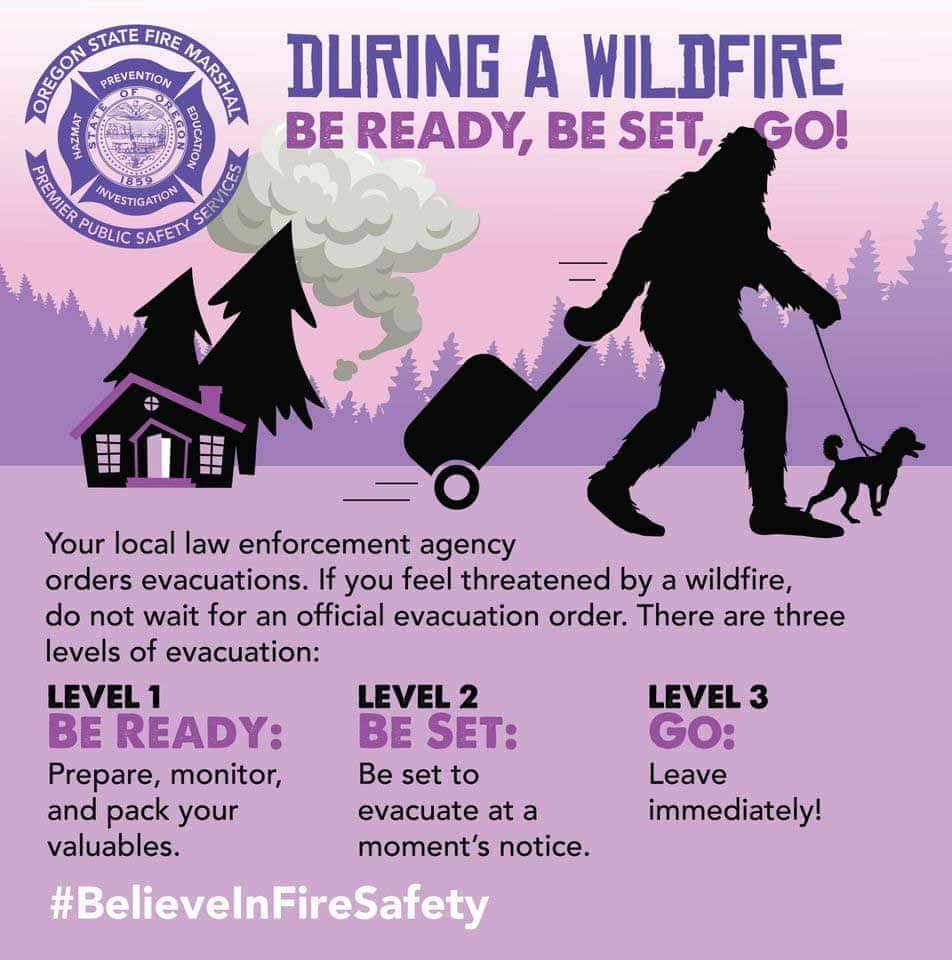 If you do need to evacuate, identify your best evacuation point. (Here’s a list of emergency shelters.) For many affected by the Holiday Farm Fire near the McKenzie River, their evacuation site is likely in the South Willamette Valley; however, those east of the Blue River should head to Deschutes County. Always check ahead to see if there is space for people or livestock. Those affected by the fires should register themselves at the Red Cross Safe and Well website to let family and friends know they’re not in danger. Find more wildfire resources below.