Guide to Fall Foliage in Oregon

Like many Oregonians, Patrick Breen eagerly awaits the broad color palette produced by the state’s diverse vegetation. A retired member of the Department of Horticulture at Oregon State University’s College of Agricultural Sciences, Breen has developed an eye for fall color as a plant physiologist and self-professed “certified plant nerd.” We asked him for a behind-the-scenes look at just why and how the leaves change color, and where you can see it in action across the state.

Why, When and Where: The Science of Leaf Color

At nearly 96,000 square miles, Oregon alone is 25% larger than all of New England. That’s a lot of ground to cover, and almost half of it is covered with forested acreage. However, the spectrum of Oregon’s colorful fall foliage is less about dying leaves than it is about the surviving trees, shrubs, and vines.

Breen notes that in leafy trees and plants, the substance leaves use to harness energy from the sun — chlorophyll — breaks down and drains away during fall. Plants take in nutrients like nitrogen from those leaves before they fall. And as the green chlorophyll departs, leaves change color based on pigments left behind. Carotenoid pigments, for example, will turn a leaf yellow; anthocyanin pigments turn trees and shrubs red. The balance of each of those pigments creates a spectrum of fall color, with red anthocyanins and yellow carotenoids creating brilliant orange hues. If some chlorophyll remains with either of those pigments, leaf colors may range from yellow green to a reddish brown.

When do those colors appear in Oregon? Well, it may depend on the weather. Breen notes that summer drought can make leaves change color early or drop well before their time. However, a rainy summer can help trees stay healthy and retain both color and leaves longer. Once fall comes around, Breen says leaf peepers should root for sunny autumn days and cold (but not freezing) evening temperatures. That fall mix helps produce brilliant red leaves, though overcast skies, heavy rain and wind can still mute colors and shorten the peak season. 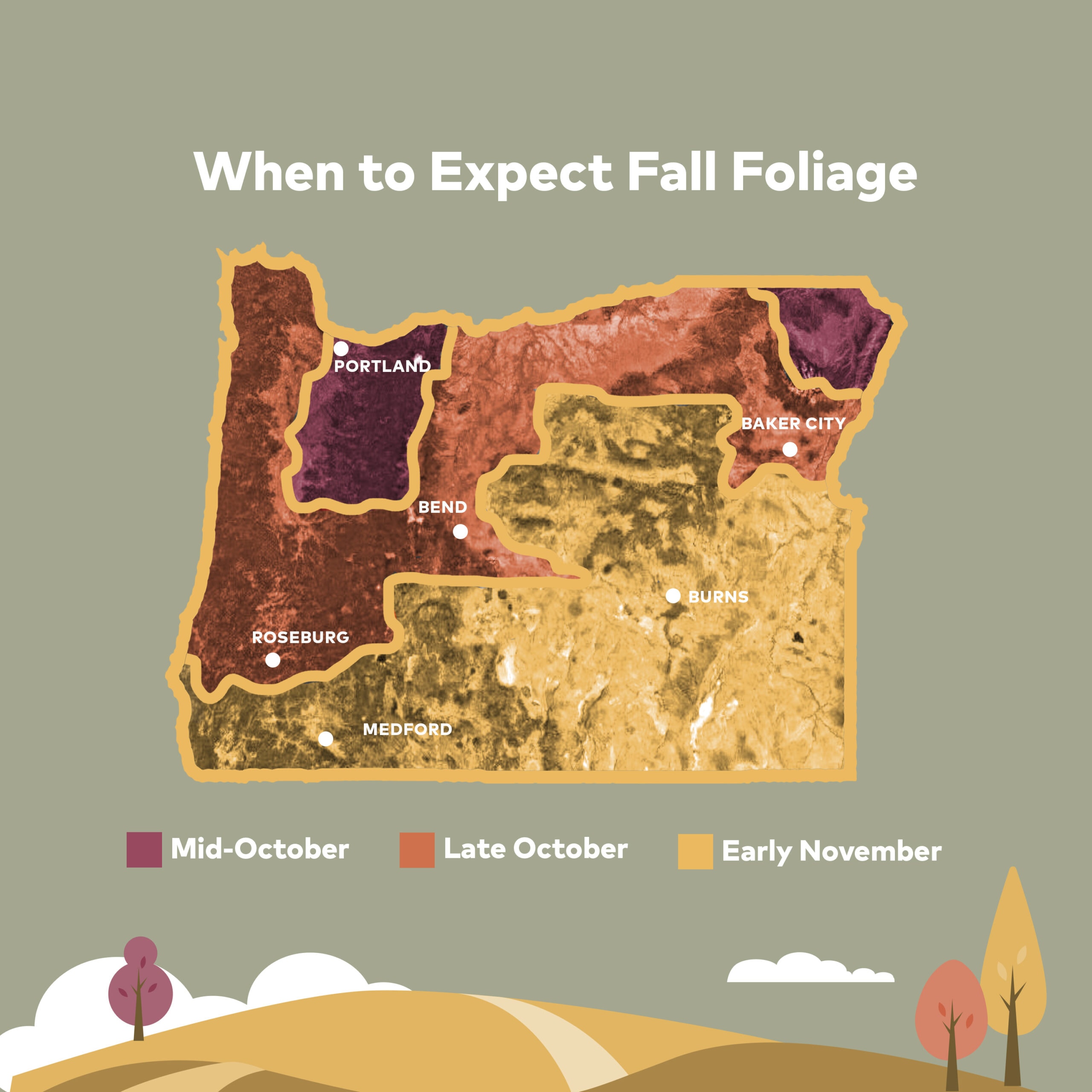 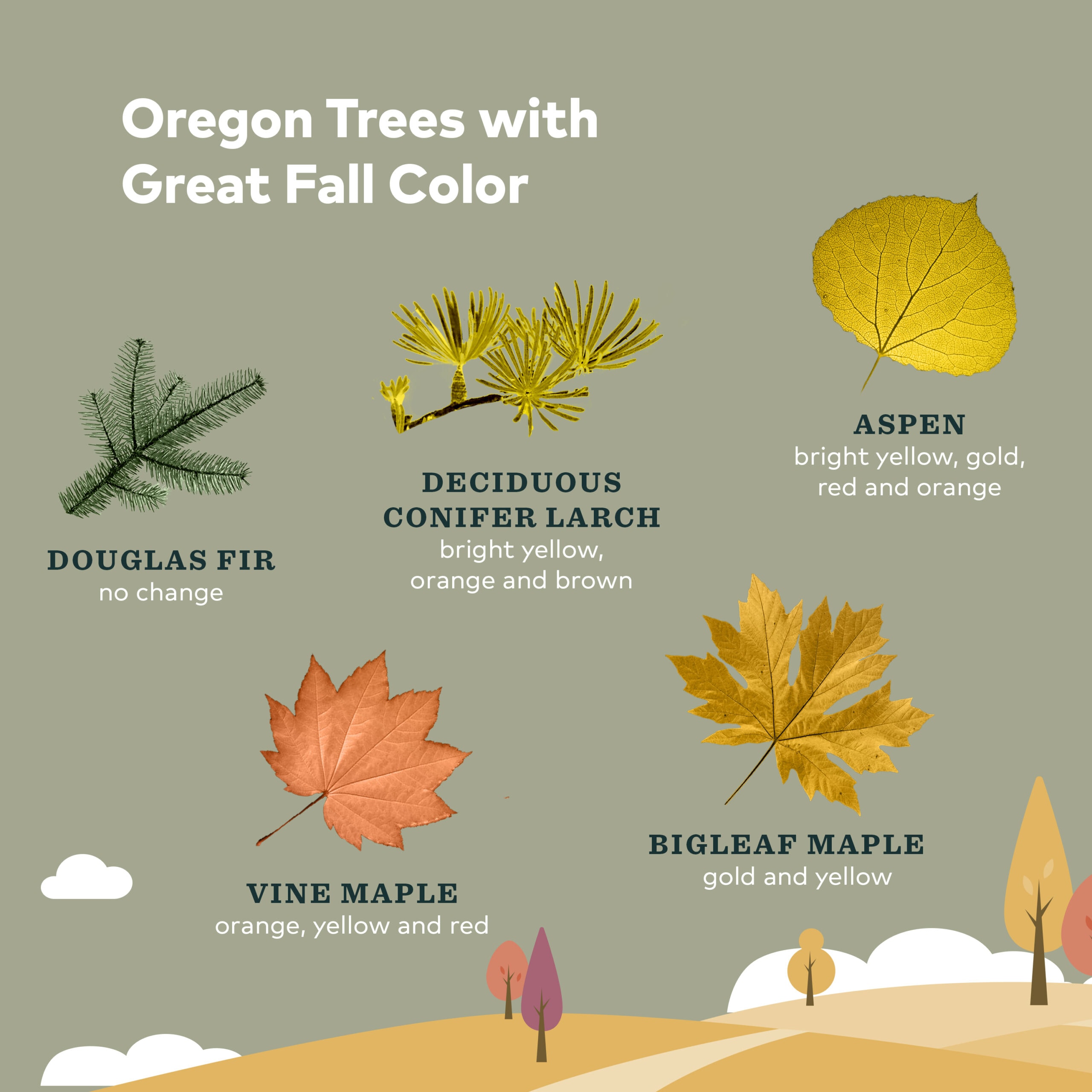 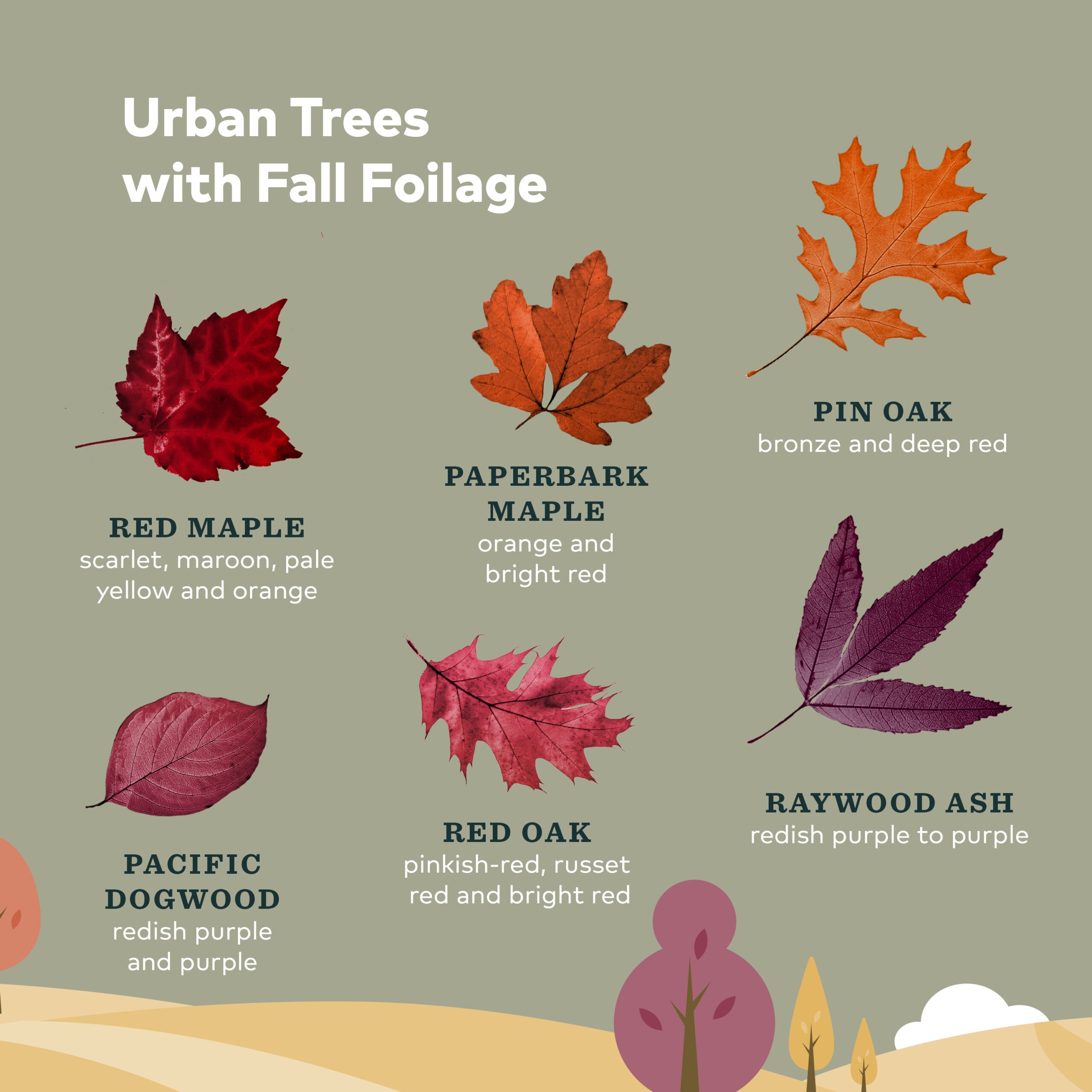 So how do you track Oregon foliage without becoming a hobby meteorologist? The rangers, biologists and leaf geeks around the state start looking in early September. Fall color peaks throughout much of the state in mid- to late October. Colors pop in Central Oregon and the Willamette Valley in mid-October, followed by Southern Oregon and the Mt. Hood/Columbia River Gorge area in late October. Foliage in the northeastern corner of the state changes last, in early November, so you can generally leaf peep for two full months if you’re really devoted. (A great alternative to traveling is checking out the changing colors on the Oregon Fall Foliage Blog, updated throughout the season.)

Top Places to Spot Foliage Near a City

The brilliance of Oregon’s fall colors doesn’t just depend on weather and location. The type of foliage makes a difference as well. “In Oregon the forest tree species with bright leaf colors in fall are vine, Douglas, and occasionally big-leaf maples, aspen and the deciduous conifer larch,” Breen says. “These are often displayed against a primarily green backdrop of conifers, which provides a pleasant contrast.”

In fact, Breen says, “the autumn displays in Oregon cities and towns may best those of our native trees because of the greater diversity of colorful non-native trees in urban settings.”

He and his colleague, Neil Bell, say some of the best foliage in the state doesn’t require a drive to the countryside. It’s right along urban streets or, quite literally, in residents’ backyards. Bell, community horticulturist at Oregon State University’s Extension Service based in Corvallis, says Oregon’s leafier neighborhoods are filled with a variety of color including red maple (with bright-red foliage), paperbark maple (red), raywood ash (purple), dogwood (red), and both red and pin oak (reddish). Meanwhile, conifers like ginkgo (bright yellow) and shrubbery including burning bush and oak-leaved hydrangea (bright red) can make local yards and gardens fiery displays of imported foliage.

“In many communities, you may not need to go anywhere, as some of our introduced ornamental trees have great fall color,” Bell says. “Just on a walk around the neighborhood, you might see some of these.”

Whether you’re taking in the Portland Japanese Garden and Hoyt Arboretum in Portland, the views along the Columbia River Gorge, the leaves of Lithia Park in Ashland, or the campus canopies of Eugene, Corvallis, Forest Grove and beyond, there’s plenty of autumnal color right in Oregon’s cities.