Bombing down the biggest mountain around

Northwest Excursions, Ride Ambassador
Length 15 Miles
Difficulty Challenging i
This level is for regular cyclists looking for
a good, hard ride. These rides will involve a
combination of length and climbing that
casual cyclists would not find enjoyable.
Nearby cities: Timberline Lodge, Government Camp, Rhododendron, Zigzag, Welches
View on Ridewithgps.com Map & Cue Sheet

If we were going to put a subhead on this trail description, it would read “A Descent through Oregon History.” But that sounds a little dry, like some school field trip – so let’s just put it this way: Ride this trail, and you’re going to enjoy the rush of descending 4,400 feet from the treeline on the state’s signature peak to the deep forests on its green flanks. And if you’re interested – and really, it’s pretty fascinating stuff – you can find out about how this trail highlights some critical moments in Oregon’s history.

First, the logistics. The route is open from late spring through fall, but specific dates vary significantly depending on snowpack from the previous winter. As the note above references, please wait until melt-out to ride higher-elevation trails.

Also: You can shuttle this route using inexpensive public transportation – in the form of the Mt. Hood Express, which pulls its own bike trailer. Find parking at the shuttle pick-up zone in Rhododendron, across the street from Mt. Hood Foods. The Mt. Hood Express runs regularly seven days a week; you can access the Express Route schedule at http://www.mthoodexpress.com/schedule-map.

The 35-minute shuttle ride will drop you at Timberline Lodge, one of Oregon’s architectural wonders and a place dear to the hearts of Oregonians. It was built in the 1930s by the Works Progress Administration, an agency devoted to providing jobs for public projects during the Great Depression. The lodge is a national historic building, and showcases massive hand-hewn timbers and hand-forged fasteners – it provides a strong a sense of the region’s natural resources as well as the craftsmanship that went into its construction. Before you hit the trail, take some time to mosey around the lodge, check out the six ginormous rock fireplaces, and maybe get the fanciest cup of hot chocolate ever.

See? You’re already soaking up history, and you haven’t even turned a pedal. But now… it’s time to ride!

Head west from the lodge toward the bottom of the Magic Mile chairlift, where the Timberline to Town Trail begins. Enjoy a quick rolling start to re-bond with your bike, and then drop into a flowing descent that extends for miles, twisting and gliding among the trees like a slalom course on the ski slopes above you. Just for fun, ponder the fact that you’re riding down a volcano.

Navigation note: You’ll come across multiple intersections once you’re about 6 miles in, so it would be a good idea to download the route to your navigation device before the ride, to make quick, correct decisions on the trail.

The route brushes up against Glacier View Road, and then transitions to Pioneer Bridle Trail #795, which takes you even further back into Oregon history.

Early settlers headed for the promised land of the Willamette Valley had two choices when they encountered the imposing peaks of the Cascades: go around, or go over. “Go around” meant detouring north to the Columbia River Gorge and trying to float all their worldly goods down an untamed, unpredictable river. “Go over” meant a precipitous traverse over the southern slopes of Mt. Hood on a toll road that didn’t really deserve to be called a “road” – it was really just a trail. And part of that passage is the very trail you’re pounding down today.

Pretty fun on a purpose-built bike; not so fun when you’re having to lower your fully loaded wagon by winch because it’s too steep for the oxen. We’ve come a long way… feel fortunate that your modern mountain bike is a vastly superior option for plying the route. Just for fun, picture yourself guiding a loaded wagon down this route.

The Pioneer Bridle Trail begins as a smooth float, but the difficulty factor ratchets up as you drop down. Loamy single-track alternates with loose, rocky sections, and plenty of optional airtime is available along the way.

About the time your grip strength is ready to give out, the trail levels out and you cross Highway 26. From there, a mixture of single- and double-track gets you back to Rhododendron – where you’ll hopefully have both more adrenaline AND more historical perspective than you did at the start of the day.

Seasonal note: If you visit early or late in the season, you can take the Mt. Hood Express to the village of Government Camp and ride the Pioneer Bridle Trail section back to Rhododendron. 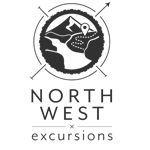 Northwest Excursions
Northwest Excursions has one goal in mind - to provide premium, well rounded cycling-centric experiences in the great Pacific Northwest. Located in the heart of the Columbia River Gorge, Hood River Oregon is often regarded as one of the most idyllic spots in the world. With rolling hills of vineyards, fruit farms, and epic mountain views, the Columbia Gorge is also a mecca for outdoor activities. Top notch mountain and road biking opportunities exist all around, but Hood River is also known for other activities that take advantage of the wind, water and mountainous terrain that surrounds you. In just a short radius of this central location, you can find yourself in entirely different climates, from dry desert to lush rainforest, and high alpine. Quite simply, Northwest Excursions wants to share this experience with like-minded, outdoor enthusiasts from other places. Northwest Excursions is based around cycling, but offers a well rounded, Hood River experiences.
More rides by this ambassador on rideswithgps.com