Bikabout, Ride Ambassador
Length 13 Miles
Difficulty Moderate i
A ride that’s not for complete beginners but won’t
be a major undertaking for those who ride regularly.
Varying levels of traffic, and could include some
hills, but nothing overly long or steep.
Nearby cities: Portland, Milwaukie, Beaverton, Lake Oswego, Tigard
View on Ridewithgps.com Map & Cue Sheet

It’s not exactly a secret that Portland has become a form of gastronomic nirvana. From our point of view, one of the best aspects of this food Renaissance is how concentrated the hundreds of great eating options are in Portland’s relatively small – and eminently bikeable – core neighborhoods. It doesn’t matter what your palate prefers – you can string together a series of culinary delights that also combine to create a great bike ride.

That’s because Portland was also the city that pioneered the “bike boulevard,” (these days they’re called “neighborhood greenways,” because they’re not just for bikes). There are well more than a dozen – the number keeps growing – of mapped, signed routes that use lower-traffic streets and traffic-calming engineering to provide a low-stress network through residential neighborhoods all over the city.

But there’s more. Portland also has built the country’s first major carmotor-vehicle-free bridge, Tilikum Crossing and instituted a highly popular bikeshare program, and there are countless bike corrals and rideable trails throughout the city.

So, let’s get specific. Here’s a suggested bike-to-eat route that offers six delectable stops, all chosen because they are 100 percent gluten-free and considered among the very best choices in Portland for their food or drink. Just in this list you can sample bakery treats, microbrew beer, decadent desserts, a food cart, local hard cider and Colombian cuisine. This is just one example of a route recommended by Bikabout, which chronicles bikeable cities and their highlights.

Beyond just tickling your taste buds, this route was planned with another purpose: to take advantage of the views from Portland’s bike-friendly bridges. All the bridges on this tour provide some separation from cars, but some are shared with pedestrians, so be sure to be respectful and ring a bell or call out “on your left” when passing. The bridges you will cross include Tilikum Crossing (aka Bridge of the People), Morrison, Steel, Broadway and Hawthorne.

And, if you’re visiting and need a bike, Clever Cycles rents famed Brompton folding bikes that come complete with generator lights, locks and a bag to carry your keepsakes and purchases. There’s also the Biketown bike share for $12 per day.

This ride will give you a true appreciation for why Portland is most famous for two things: bikes and food. Get out there and indulge yourself in both! 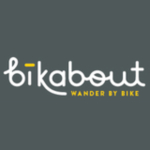 Bikabout
Bikabout is a free travel site that inspires two-wheeled tourism in North America's best biking cities. Use Bikabout to plan your next vacation, weekend getaway or day trip.
More rides by this ambassador on rideswithgps.com