A former logging road/train track offers cyclists a wild ride, through the wild

Some rails-to-trails routes are, well, more converted than others. Their underlying appeal is that they usually provide a not-too-steep trip through some country you’re not likely to see from a road. And because they usually already have a well-constructed railbed, building a nice paved path on them isn’t all that challenging. Think of the Banks-Vernonia Trail (more on that later).

But then there are routes like the Crown-Zellerbach Trail, which is about as minimally converted as you’ve probably encountered. But it still has that same appeal – in spades. This rugged route, which encompasses paved asphalt, grass-and-dirt, gravel and even a bit of muddy single-track, takes you on an entirely different journey between the towns of Scappoose and Vernonia than the highway it parallels.

A quick note: While it’s possible you could ride a road-bike setup on this trail, you’re probably far better to approach it as a gravel route in terms of tires, etc. A mountain bike might hold you back, because you’re going to cover some significant stretches on actual roads. A second quick note: the CZ is a multi-use trail, so watch out for walkers and equestrian users as you ride. And stay on the designated trail, as private property runs through and nearby.

A little history: The Crown-Zellerbach Trail follows an abandoned logging road and railway line near the small community of Scappoose. There was so much logging traffic back in the day, bringing cut trees to the local mills and poleyard, that CZ (a now-defunct timber company) made their own road. Today you can use it to go from the Multnomah Channel of the Columbia River deep into the Coast Range. Much of the ride is through lush forests. And it’ll be an adventure, for sure – one you can curate with the trusty “I feel halfway done; let’s turn around here” approach if it gets to be too much.

We’ll get to logistics later; let’s talk about the ride. The trail officially starts at Chapman Landing, on Dike Road outside Scappoose. The dike in question was built as a flood-control method, to keep the Multnomah Channel – the smaller of the river’s two ways around massive Sauvie Island, which is one of the largest freshwater islands in the world. If you start here, you’ll spend about the first 2.5 miles just tooling along the flat grade to get into Scappoose proper. At one point you’ll need to cross Highway 30, the Columbia River Highway; this is a busy one, so be extra careful getting across. Once you’ve done that, you’ll soon start the gradual climb up into the Coast Range.

The CZ road pretty closely parallels the Scappoose-Vernonia Highway, but it’s usually just far enough from the action to feel more natural. You’ll cross driveways and even a few roads, but a lot of the time you’ll feel swallowed up in the forest, which is probably why you’re here.

The climb is not insignificant – 1,100 feet over 11 miles, a bit steeper as you approach the crest, which is about where you’ll cross the highway for the second time (the first is “in” Spitzenberg, which may or may not have enough infrastructure to rate a place name). The glide down the other side will take you past the entrance to Scaponia Park (16.7 miles), which has restrooms and 7 acres of nature that make a good spot for a walk and picnic. (Local note: When the park was built, the county decided to combine the names of the two towns it lies between. It could have gone the other way and been “Vernoose.”)

After the park, it’s basically flat all the way into Vernonia. At 19.2 miles you’ll join the highway itself, for about 3 miles to the junction of Highway 47; then you’ll follow 47 about 4 more miles into town. The shoulder on Hwy 47 is generally good, but be cautious as large log trucks still rumble through here.

When you cross the Nehalem River bridge, the “downtown” of Vernonia is just over a small hill. A few fun things to note about this town: their municipal swimming pool is a section of the river with a small dam (it’s really refreshing in the summer!), and just west of the road into town is a giant pond that once floated logs for the massive local lumber mill (the lake is now a park).

OK, here comes the logistics. You can turn around and go back on this out-and-back route, simply retracing your way. You can also choose to spend the night in Vernonia; this community has seen a renaissance as Washington County techsters have discovered that the commute from here to Intel is faster than it is from Portland – plus it’s a small town in a pretty setting. It’s also because this is one terminus of the Banks-Vernonia Trail; local businesses have learned that cyclists are a good (hungry/thirsty/tired) crowd to attract. Therefore, you can get a good meal here, sample many tasty beverages, and find some charming lodgings.

The other option is that you can use Vernonia as a connection point between the CZ Trail and the B-V Trail. A car-parking-shuttle plan would allow you to ride from Scappoose to Banks, almost all of it off-road. You can even make a very big loop by navigating from Banks to Scappoose (general directions: North Plains, Skyline, Rocky Point Rd., Highway 30).

If you’re hanging out in Vernonia and looking for food, consider the Blue House Cafe (casual Mediterranean, with very friendly service), the Black Iron Grill (high-quality pub food), the All In Pub (outstanding burgers), La Cabana (Mexican) or Mariolino’s (pizza and comfort food).

If you’re looking to stay overnight, choices include Ride Inn, a boutique-hotel and The Carpenter’s Guest House.

If you’re looking for food in Scappoose, you can get your fill of good pizza and a big salad bar at Fultano’s Pizza, try the Mexican fare at Ixtapa, go to the venerable Longfellows Inn, where you can grill your own steak on the communal indoor firepit. Or, for something a little more elegant, try Mark’s on the Channel, not far from the start of the CZ Trail. 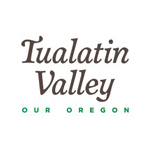 Tualatin Valley
Scenically situated between Portland and the Oregon Coast, Tualatin Valley is an ideal cycling destination. Encompassing 727 square miles, Tualatin Valley offers many miles of bike paths, from urban trails connecting cities to rural paths in the forest. Our bike paths welcome all riders--from the beginner to the advanced--and offers a variety of terrain, including dirt, gravel and paved. Small-town restaurants, breweries and wineries are some of the points of interest to explore here, while lodging is plentiful for visitors. Whether you want a leisurely ride or an invigorating journey, Tualatin Valley will provide fantastic views, enjoyable rides and welcoming hospitality at every stop.
More rides by this ambassador on rideswithgps.com