Explore Oregon With the McMenamins Passport

Honestly I couldn’t tell you which McMenamins I visited first. The family-owned chain of pubs, breweries and historic hotels is so ingrained in the Oregon identity that you forget when it all began. Most likely my first McMenamins experience was at North Bank, one of the three locations in Eugene, due to its close proximity to the University of Oregon’s Autzen Stadium — that or East 19th Street Café near my dorm room.

Of course I’ll always remember when we first received our McMenamins Passports; it was the weekend of our wedding, which was held at the Kennedy School in Portland. The sprawling property was a dreamy venue for our big event, decorated in homage to the history of the 1915 elementary school with many original fixtures refurbished and bars themed “Honors” and “Detention.” The reception was held in the converted gymnasium and the hallways between hotel rooms bore chalkboard messages between friends. Knowing that the overnight stay and soaking pool would earn us additional passport stamps, we paid $35 each to start our epic Pacific Northwest adventure.

The mission is simple enough: Collect stamps from each McMenamins location to earn prizes. Inside the blue booklet, McMenamins groups its outposts by proximity— in all it has 62 serving Oregon and Washington. Neighboring sites share a prize, while each of the eight hotels in Oregon get their own page with multiple quests. Always give yourself time to collect the stamps since some require looking for artwork based on a cryptic clue, and check hours of operation as places like Ruby’s Spa close by evening.

Once you complete a page, you quickly understand the value of the passport. Prizes range from limited-edition merchandise of your choosing to entire appetizers or entrees for free. Of course the best part is getting to know the properties more deeply. Since 1983, the McMenamins family has renovated historic buildings to become unique food, drink and entertainment destinations. Along the way they became producers of fine beer, wine, cider, spirits and coffee. Each location is covered with whimsical art dedicated to local history and the company’s collection of branded characters, plus more than a few Grateful Dead tributes. The menu differentiates only slightly at the restaurants, and you can always count on quality staples — juicy burgers, tasty salads and the iconic Cajun tots.

We’re only one stamp away from finishing our passports and becoming Cosmic Tripsters. The moment that happens, we’ll be awarded the Grand Prize, which includes hotel stays, a pair of tickets to a McMenamins concert venue, drinks at happy hour prices for a year, exclusive merchandise, and an invitation to the next Cosmic Tripster Party. Just after completing a McMenamins Passport, many people buy their next one.

Because of our passport-guided road trips, we’ve explored special parts of Oregon with fresh eyes. We took an extended drive down the Pacific Coast Scenic Byway to claim our free chowder at the Lighthouse Brewpub in Lincoln City. Roseburg Station Pub & Brewery brought us to our fifth Oregon Mural Trail stop. An unofficial tour of White Eagle Saloon & Hotel taught us about Portland’s paranormal lore. Old St. Francis School gave us reason to walk leisurely through downtown Bend. McMenamins Coffee Roasters made a rainy morning much more satisfying.

As if you need any more incentive to join the fun, here are a few more favorite experiences we discovered during our quests. (Feel free to replicate.)

Home to arguably the best outdoor concert venue in the Portland Region, McMenamins Edgefield is a must-visit destination at the western end of the Columbia River Gorge National Scenic Area. Originally a country poor farm built in 1911, the 74-acre property today boasts more than 100 guestrooms, a soaking pool, a golf course and production facilities for beer, wine and spirits. After running around the premises for stamps, take your pick of the branded merch at the hotel front desk — we chose a shirt and Black Rabbit doll. Bonus experience stamps (and prizes) come with tours of the brewery, winery and distillery. When top artists headline Concerts on the Lawn, remember your commemorative stamp too. 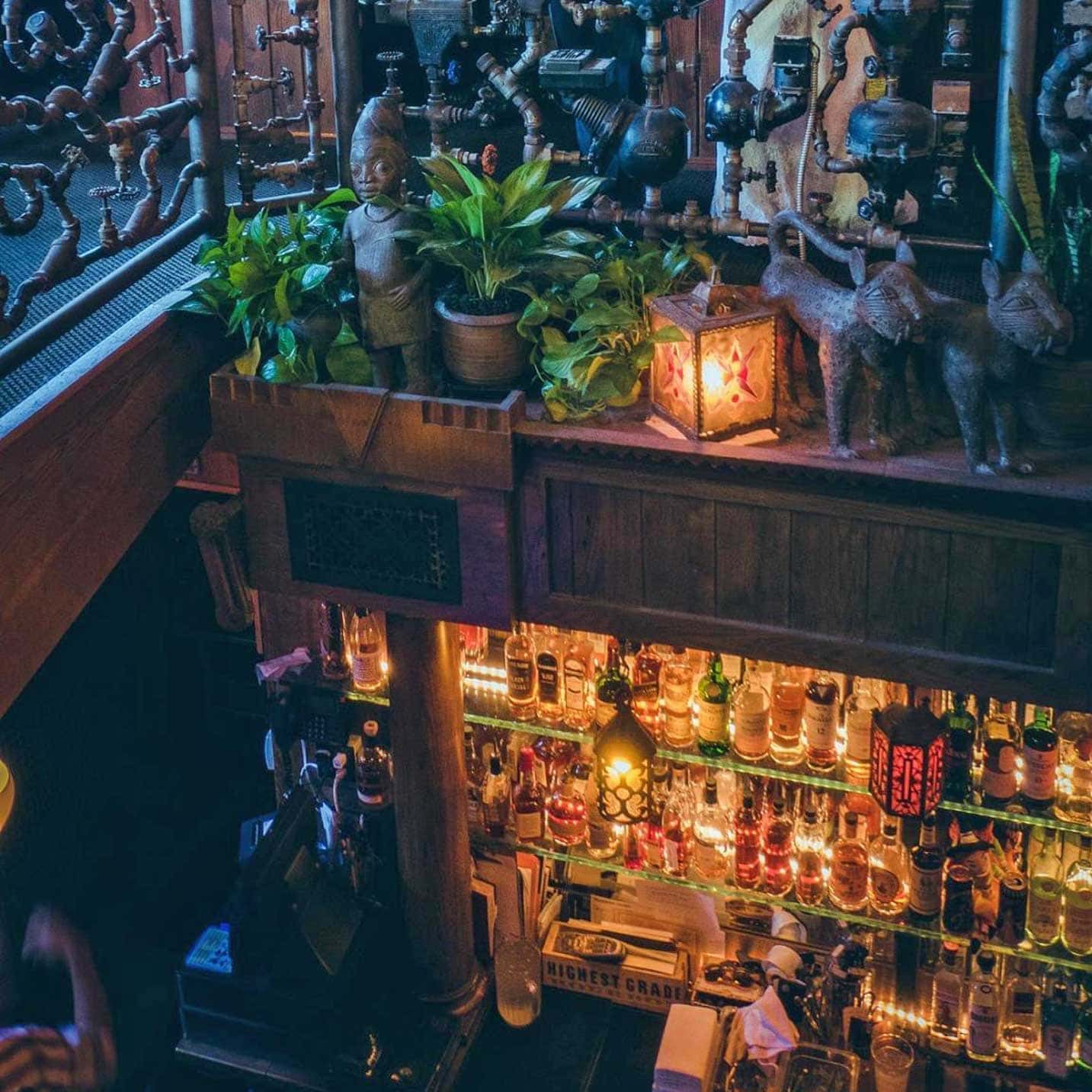 Obviously a favorite for those of us who said “I do” next to a converted gymnasium, the Kennedy School brims with fairy-tale charm. Wander the indoor campus to find rooms named after the former elementary school’s most loved teachers and play a game of shuffleboard at the very photographic Boiler Room Bar (one might take wedding photos there). While most bars are 21+, the restaurants aren’t and you can count on kid-friendly movies playing at the theater, plus the soaking pool welcomes minors from 10:30 a.m. to 6:30 p.m. Keep tabs on the event calendar as the Kennedy School often hosts History Pubs for an extra experience stamp. Northeast Portland’s iconic Alberta Arts District is within walking distance. 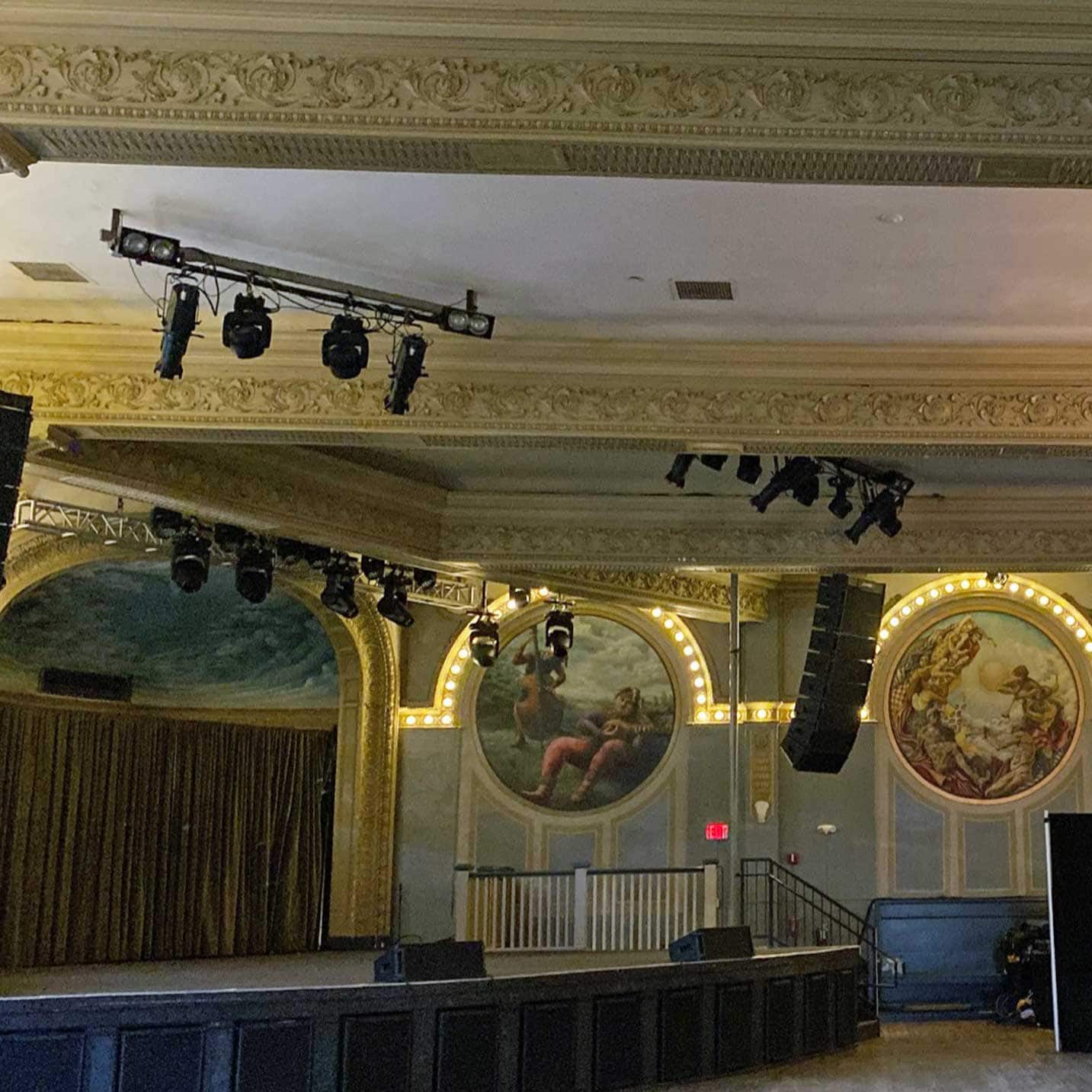 If you’re a music lover in western Oregon, chances are you’ve probably seen a show at the Crystal Ballroom in downtown Portland. The century-old venue’s “floating” spring-loaded dance floor is worth the experience alone. A free tour of the ballroom is needed to complete the Crystal Hotel passport page — they’re usually offered weekly at 2 p.m. but call ahead to confirm. In all there are eight sites of the Crystal Blocks spread across two blocks on Burnside. Many of Crystal Hotel’s original charm remains long after opening in 1911, including a speakeasy and underground saltwater soaking pool (open to hotel overnight guests only). The pint-sized Ringlers Annex leads underground, and you can peer into the city lights above from the ceiling’s frosted glass panels. 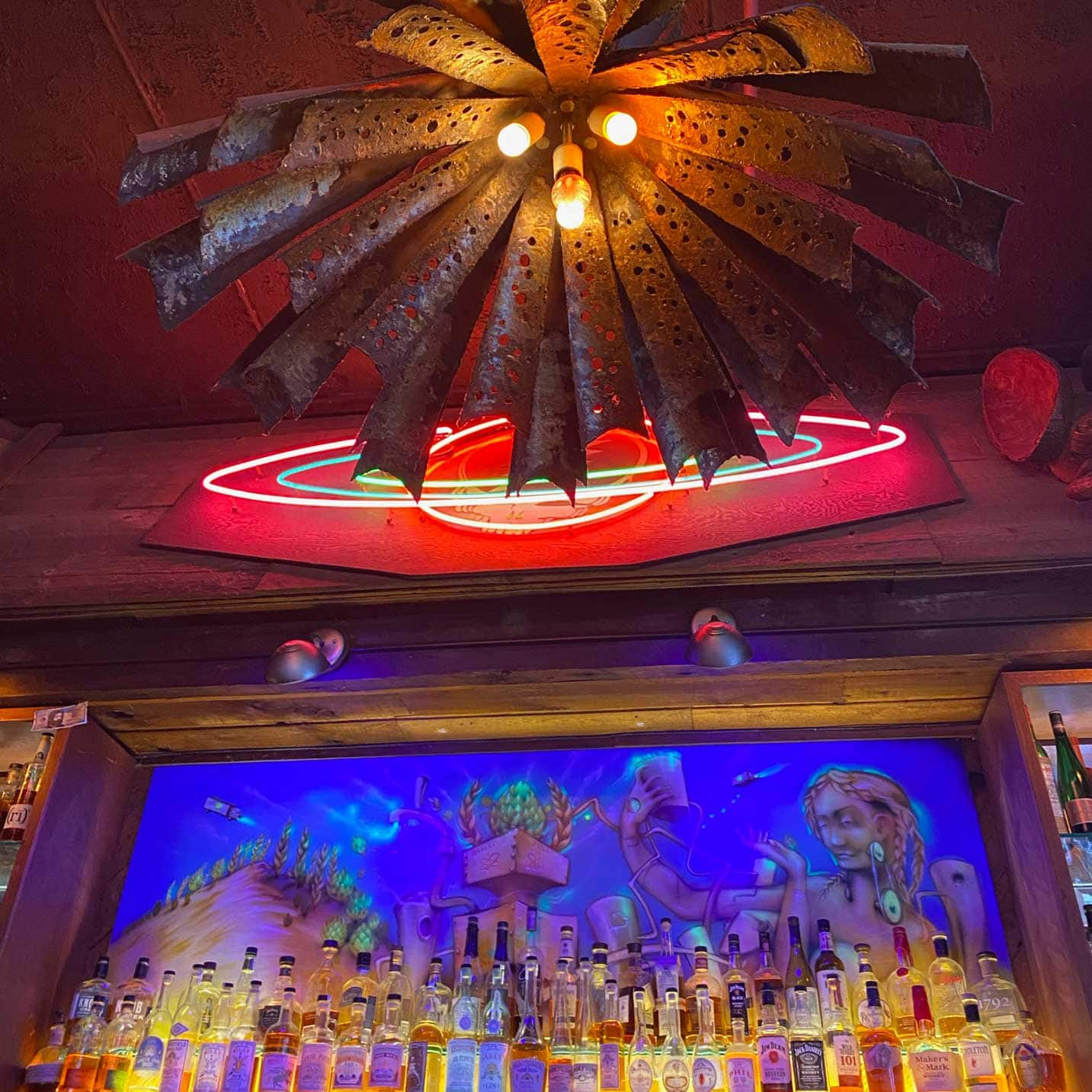 Located on Hawthorne Street in Southeast Portland, Barley Mill was the first venture of the McMenamins brothers, opening in 1983. Here the company doubles down on its Grateful Dead memorabilia, plus some otherworldly themes, with art spilling off the walls into every nook and cranny. Its central location and easy outdoor seating (complete with heat lamps) make it a treasured McMenamins location for locals. 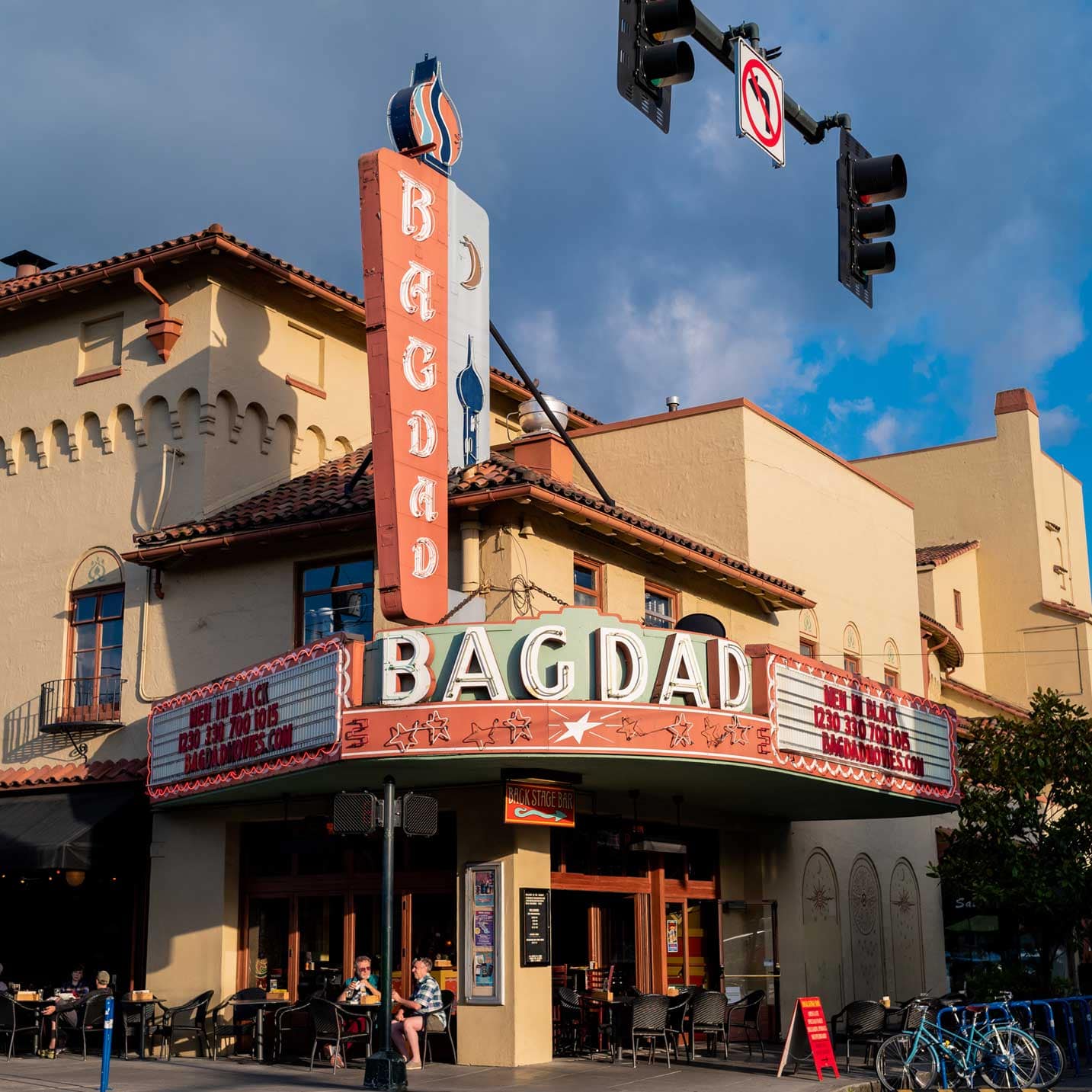 Wherever your curiosity lies — movies, drinks, billiards or cigars — the iconic Bagdead Theater will satisfy your cravings. The 1927 theater is a relic of Holywood’s Golden Age, hosting everything from silent films to the official premiere of “One Flew Over the Cucukoo’s Nest” and even a performance by Sammy Davis, Jr. Treat yourself to dinner and a movie in the Golden-Age theater, then a whiskey and cigar nightcap at Greater Trumps — all easy enough stamps (bonus ones for the film and games.) 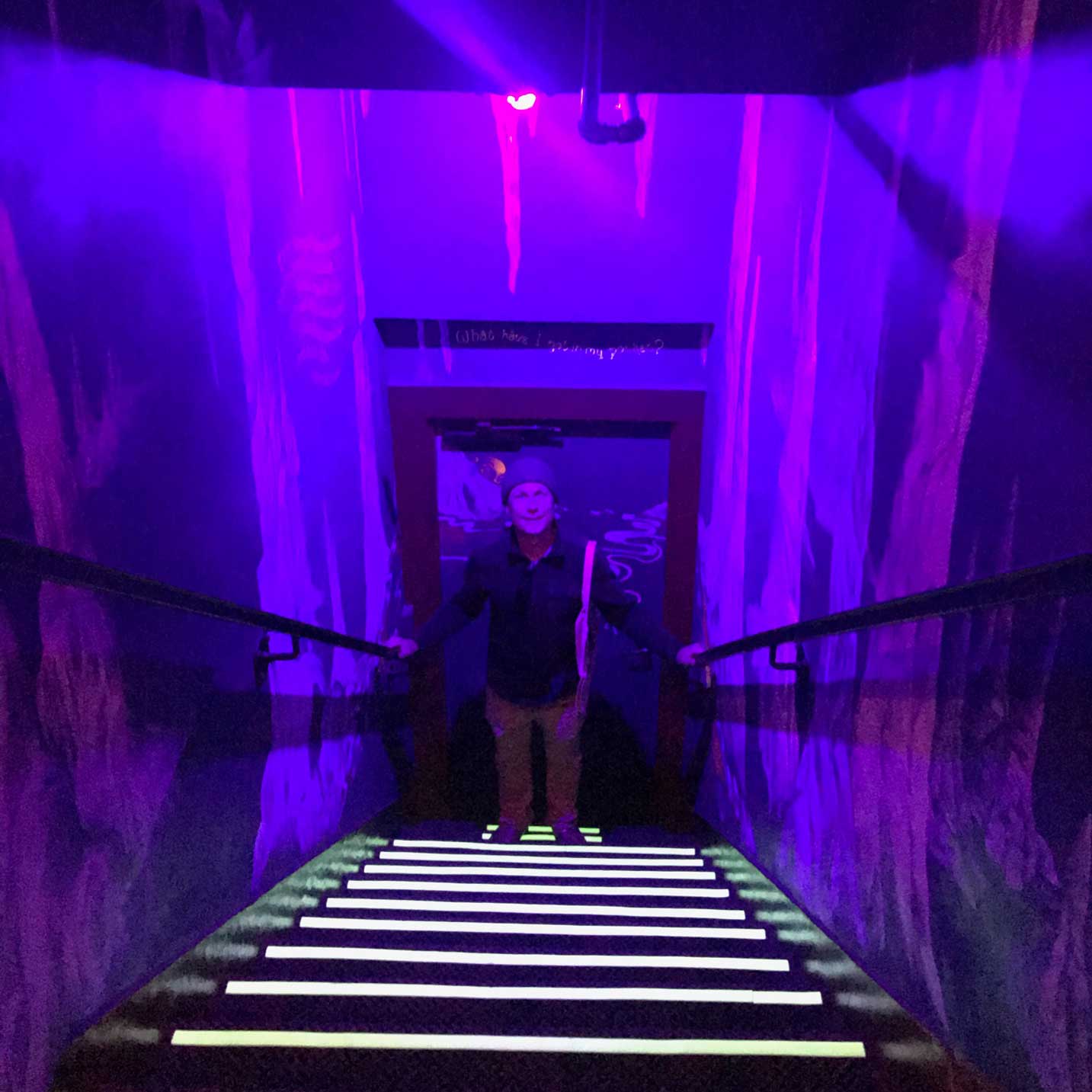 Once a Masonic property now a rejuvenating destination, the Grand Lodge has all the best McMenamins ingredients — bars, restaurants, soaking pool, spa, movie theater — and more. The location near Oregon wine country and the Tillamook State Forest makes it an prime base camp, while recent renovations bring exciting new features like attic-level guestrooms, a literary-themed bar and hidden rooms. Come summer, catch free concerts six days a week and be sure to order a dish featuring pickled vegetables, made in the fermentation chamber onsite. 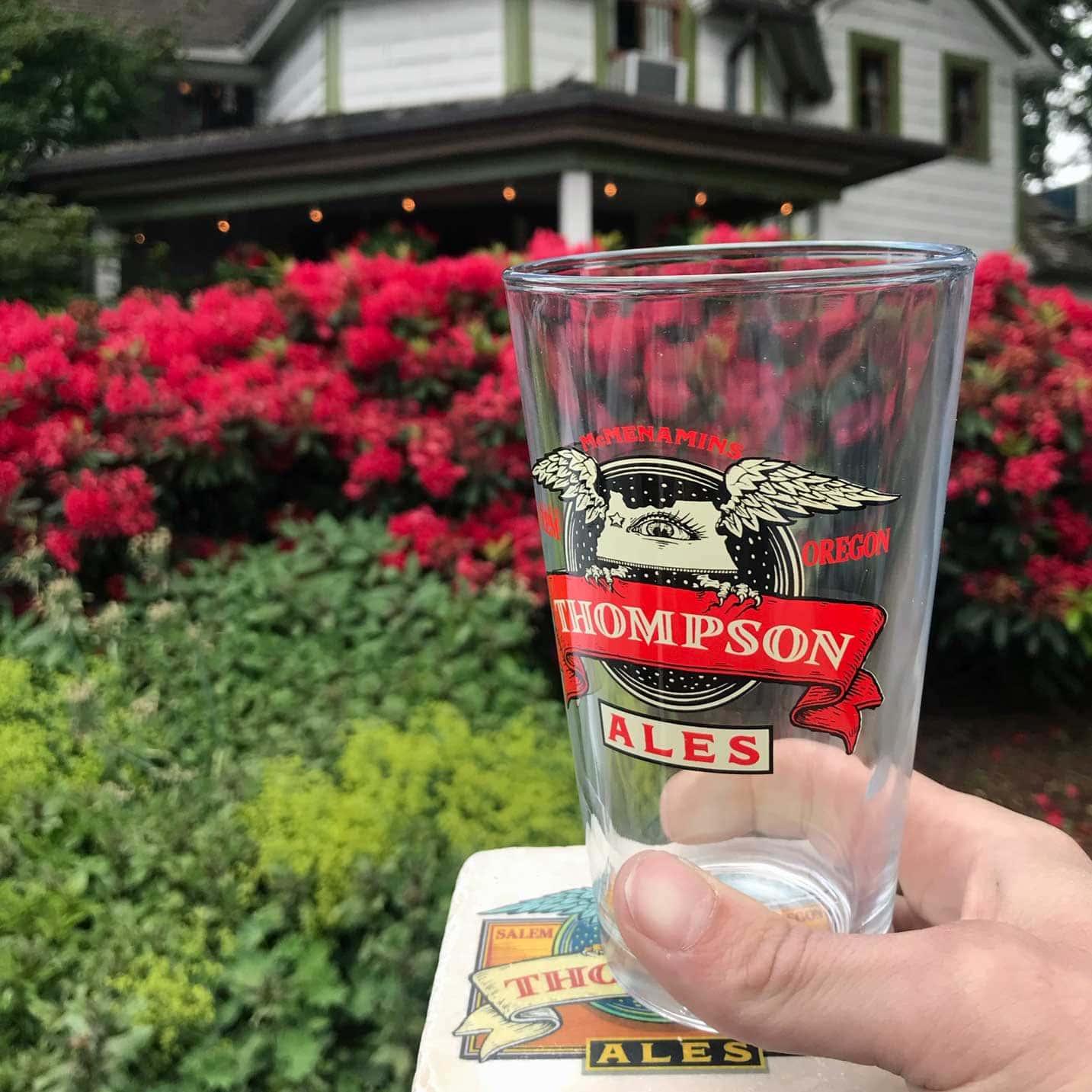 Quite possibly the best deal of the bunch, for just two passport stamps in Salem you earn a free entrée. Better yet, Thompson Brewery and Boon’s Treasury are worthwhile stops without the complimentary meal, both with charming layouts in great locations. Luck was with us when we stumbled upon the annual Barley Cup Brewfest at Thompson Brewery, when for an extra scavenger hunt as passport-holders we were awarded special merch. 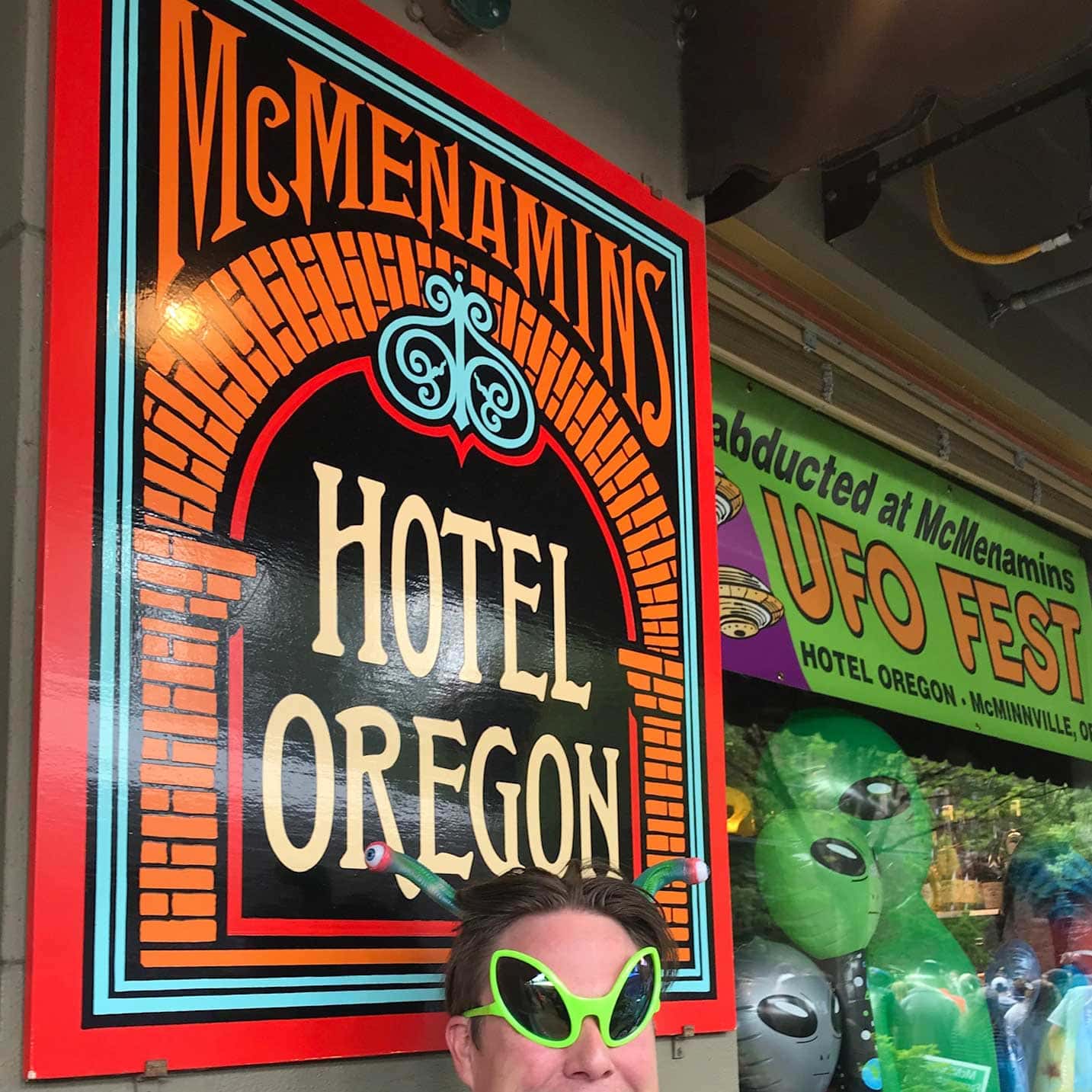 Smack-dab in the middle of downtown McMinnville and Willamette Valley wine country, Hotel Oregon has been a beacon for pleasure seekers since 1905. Wind your way up to the rooftop bar for the best view of Main Street, looking for artwork that may relate to the front desk’s clue. Once a year thousands flock to town for the McMenamins UFO Festival, featuring parades, expert speakers, pet costume contests and live music. 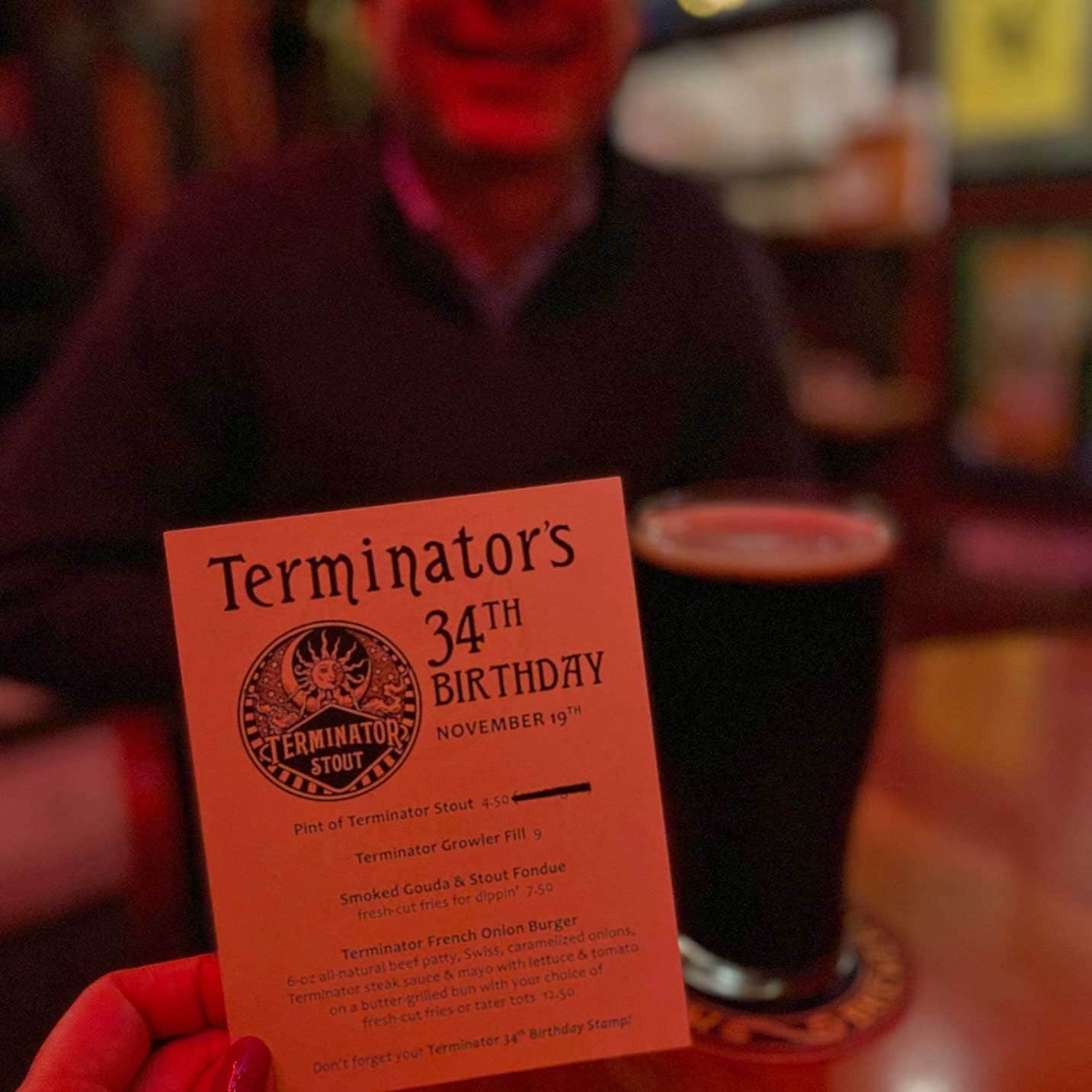 If you’re questioning buying the extra passport insert for $5, do it. You’ll find even more bonus experiences to conquer, and for every four you’ll gain a $20 McMenamins gift card. They’re as simple as riding a bike there or as rewarding as filling a growler. Then there are other stamps to collect that don’t necessarily earn you prizes, well, besides pride. My husband shares a birthday birthday with the Terminator Stout so we always stop by that day for a discounted pint and souvenir stamp.