When my family moved to the United States from Japan when I was 5 years old, we bought an overgrown apple orchard near Eugene. From late July to late November every year since, we’ve been overwhelmed with thousands of pounds of apples to deal with.

My mom quickly learned countless ways to use the fruit: eating them with sharp cheddar and water crackers, baking them into tarts, pureeing them into sauce and drying them into crunchy treats, to name a few. As the years passed, we figured out what varieties work best for what: Gravensteins in July for tangy pies, Fujis in November for sweet dried-apple snacks. We found that though the domesticated apple is a single species, varieties differ dramatically in taste and texture.

While our farm and others in the Willamette Valley are known for their abundance of apples, Oregon’s Hood River Valley is another major growing area, prized for its mix of sunny days and cool nights, volcanic-rich soil and glacier-fed waters at the base of Mt. Hood — which together produce a unique growing environment. The region’s reputation for apples dates back more than a century to the 1900 Chicago World’s Fair, when local growers were awarded 16 blue ribbons. “Since the Centennial Exposition, everybody in the world knows about Hood River apples,” a Chicago newspaper reported.

Whether you’re apple tasting in October — National Apple Month — or any time of year, here’s a guide to enjoying the great varieties and products of the Gorge’s apple harvest by visiting orchards, bakeries and tasting rooms.

Orchardists like Randy Kiyokawa of Kiyokawa Family Orchards in Parkdale grow varieties of apples that local customers and businesses turn into baked goods, hard ciders and even spirits like vodka. Kiyokawa’s family has grown apples on their property since his grandfather emigrated from Japan and cleared the plot of land in 1911. Of his 100-plus varieties, Kiyokawa says some of his favorites are the Zestar (at their peak in July and August), Jonagold (early fall), and Crimson Crisp and exceptionally flavorful Honeycrisp (late fall).

Though Gravenstein is often used as an early-season baking apple because of its tartness, Kiyokawa says it melts when baked in pies. He suggests Akane, a Japanese variety of apple he says imbues baked goods with a wonderful apple aroma.

Visitors may buy apples from Kiyokawa Family Orchards’ farm stand any day of the week from late August through October, or find the orchard’s booth at more than a dozen farmers markets (listed on the orchards’ website) in the Columbia River Gorge and Portland region.

A Perfect Fruit for Baking

Bakers know apples better than almost anyone; they need to be experts on texture and flavor to make perfect apple pastries. At Pine Street Bakery in Hood River, Megan Davis uses a dozen different apple varieties in her apple hand pies, muffins and coffee cakes. She uses Gravensteins from Paasch Orchard down the road from the bakery in her apple coffee cakes because she says soft apples are a better match for the tender crumb of a coffee cake. Another variety ideal for coffee cake is the Elstar, sought out for its deep apple flavor and beautiful rosy skin. For her hand pies, she buys and freezes Granny Smith apples in bulk each season. She says it’s a great pie apple because it’s tart and holds up its firm texture, even when frozen and baked. For a next-level pie, Davis recommends combining a tart, firm apple like Granny Smith with an apple with a complex apple flavor like Jonagold.

Visit Pine Street Bakery, about a mile south of downtown Hood River, for its showcase of decadent baked goods as well as breakfast and lunch sandwiches, fresh-baked breads, and coffee drinks. Inspired to take some apples home? Farm Stand in the Gorge, an organic grocery store just down the block from the bakery, carries some of the region’s freshest local produce and offers nourishing meals at its grab-and-go section and on-site cafe.

Samuel Asai, owner of A & J Orchards in Hood River, says for hard cider — a drink that’s exploded in popularity in the U.S. in the last 10 years — you want apples with even more acidity than those used for pie. Like the Kiyokawas, Asai’s family has been growing fruit in their orchard for over 100 years.

Though he grows more pears and cherries than apples, he does grow some old American cider varieties, like Newtown Pippin. Aspiring cider makers can find Newton Pippins at A & J’s stand at the Hood River Farmers Market.

For his cider, Lawrence uses traditional French and English apple varieties. He planted 3,000 cider-apple trees on his 36-acre farm when he started the business in 2015.

Lawrence uses Kingston Black, a variety Kiyokawa grows, in some of his cider blends and recommends that variety for home cider makers. Before starting Stone Circle, he spent six months studying cider making in southwest England, and his ciders mimic English-style cider as closely as possible. Visit the Estacada tasting room (which hosts live music, too) or pick up bottles of dry, semi-dry, sweet and sour cherry via on-site pickup or in stores around Oregon. Also check out the many other cideries where you can sip cider on outdoor patios in the Gorge and Mt. Hood region.

As cider and spirit lovers know, the flavors make for excellent sipping. Oregon’s cider scene has boomed in the past decade, particularly in the Hood River Valley, where visitors can taste a flight right on the estate orchards where the apples are grown.

Cider has a long history in the U.S. Joseph O’Sullivan, master distiller for Clear Creek Distillery and Timberline Vodka — both in Hood River — says alcohol made from apples was common in the early years of the country. When European colonizers first came to North America, there were no fields of barley or wheat to make beer with. But the hills were studded with crab-apple trees. Crab apples can’t be eaten on their own like orchard apples, so O’Sullivan says the colonizers turned them into cider and apple brandy — which O’Sullivan says was distilled in the U.S. earlier than whiskey.

Today Clear Creek Distillery produces some of Oregon’s finest fruit-based spirits, made with local apples, of course. Founded in 1985 as one of the first craft distilleries in the U.S., the company makes two types of apple brandies aged in French oak barrels and an American-style brandy that’s aged in bourbon barrels. The distillery also makes a 100% apple vodka, which O’Sullivan says is smooth because the vodka is highly purified during distilling but has a sweetness and an apple-blossom aroma that makes it ideal to drink on its own. For a more subtle apple flavor, Timberline Vodka produces a mixed-grain and apple vodka that won the Double Gold award at the 2021 San Francisco World Spirits Competition. You can try Clear Creek Distillery brandies and Timberline Vodka at the Hood River Distillers tasting room in downtown Hood River.

With so many varieties of juicy apples to taste in the Columbia River Gorge, it’s time to get your tasting trip on. You can eat, bike and take a self-guided driving tour around the Hood River Fruit Loop any time of year. If you visit in fall during harvest season, be respectful of slow-moving farm vehicles on the back roads and check with individual farms about their pet policies.

Measure flour, sugar and salt into a bowl; mix, then refrigerate for at least 1 hour.

Place peeled and sliced apples into a large bowl. Mix sugars, flour and spices in a small bowl. Sprinkle mixture over the top of apples, add lemon juice and toss until apples are completely coated with sugar mixture. Set aside for 1 hour.

Just before starting to make the crusts, put ice water and lemon juice in a measuring cup; set aside. Dice cold butter into approximately ½-inch cubes and toss into the refrigerated crust-flour mixture. Using your fingertips, a fork, or a pastry blender, mix until it feels like rough cornmeal with a few chunks. If you feel as though the dough is getting warm, return it to the refrigerator.

Gradually drizzle three-quarters of the ice water over flour-and-butter mixture, making sure not to get any ice into the mix. Start to mix gently with a fork or fingers. Check hydration by grabbing a small chunk in your fist and seeing if it holds together. If it doesn’t, put in a little more water, but do not over-hydrate. Once it holds together, it’s done.

Divide your dough into 2 equal parts, about 12 ounces each. Form into 2 balls, place each ball on a piece of plastic wrap and wrap tightly. Flatten each wrapped dough ball to form a 4-inch disk. Chill for 1 to 2 hours or up to several days if you want to do this ahead of time. These disks can also be frozen.

Remove cold disks, unwrap and put onto a floured surface. When rolling dough, work quickly and use enough flour so that dough doesn’t stick. Roll out dough into a circle larger than your pie pan, approximately 12 inches for a 9-inch pan. The crust should be about ⅛-inch thick. Gently fold the dough in half to transfer to a pie pan. Carefully arrange apples so there are only small air gaps, dot with 3 tablespoons butter, then refrigerate. While this is chilling, roll top crust similarly to the bottom. Gently fold the dough in half and transfer to the top of the pie.

If needed, trim uneven crust with scissors or paring knife, making sure to leave at least 1½ inches over the rim of the pie pan. Fold edges of crusts under together and crimp. Cut vents in the top of the pie. Four to eight 1-inch cuts will allow steam to vent out — you can do plain crusts or be creative. Store in the refrigerator for 30 minutes before baking, or wrap and freeze for up to 4 weeks. Before baking, brush top crust (but not edges) with water and sprinkle ½ teaspoon granulated sugar over top. Preheat the oven to 375 degrees. Bake pie for 30 minutes, then turn down to 350 for 30 to 45 minutes. Cook until golden brown and apples are tender. The pie may need to be rotated for even color. Place a cookie sheet under if it starts to drip. 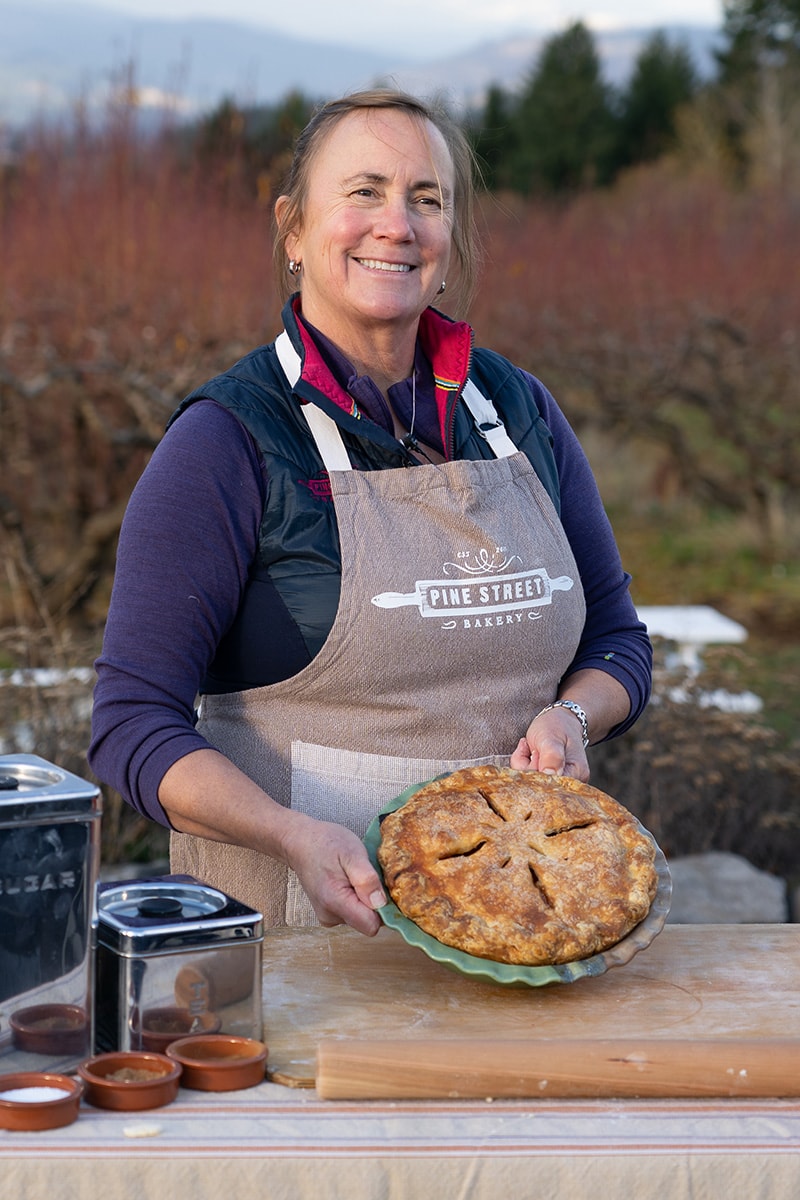