The Allure of Joseph

We had been searching for a box canyon town — my wife is obsessed with the feeling of mountains towering over her — and discovered majestic Joseph. Almost a seven-hour drive from Bend, we arrived at a sparsely clouded mountain town. The Wallowa Mountains rise 9,839 feet, stretch over 40 miles, and once you drive to the end of the road, which is a trailhead to the Eagle Cap Wilderness, you feel like they completely encompass and engulf you. 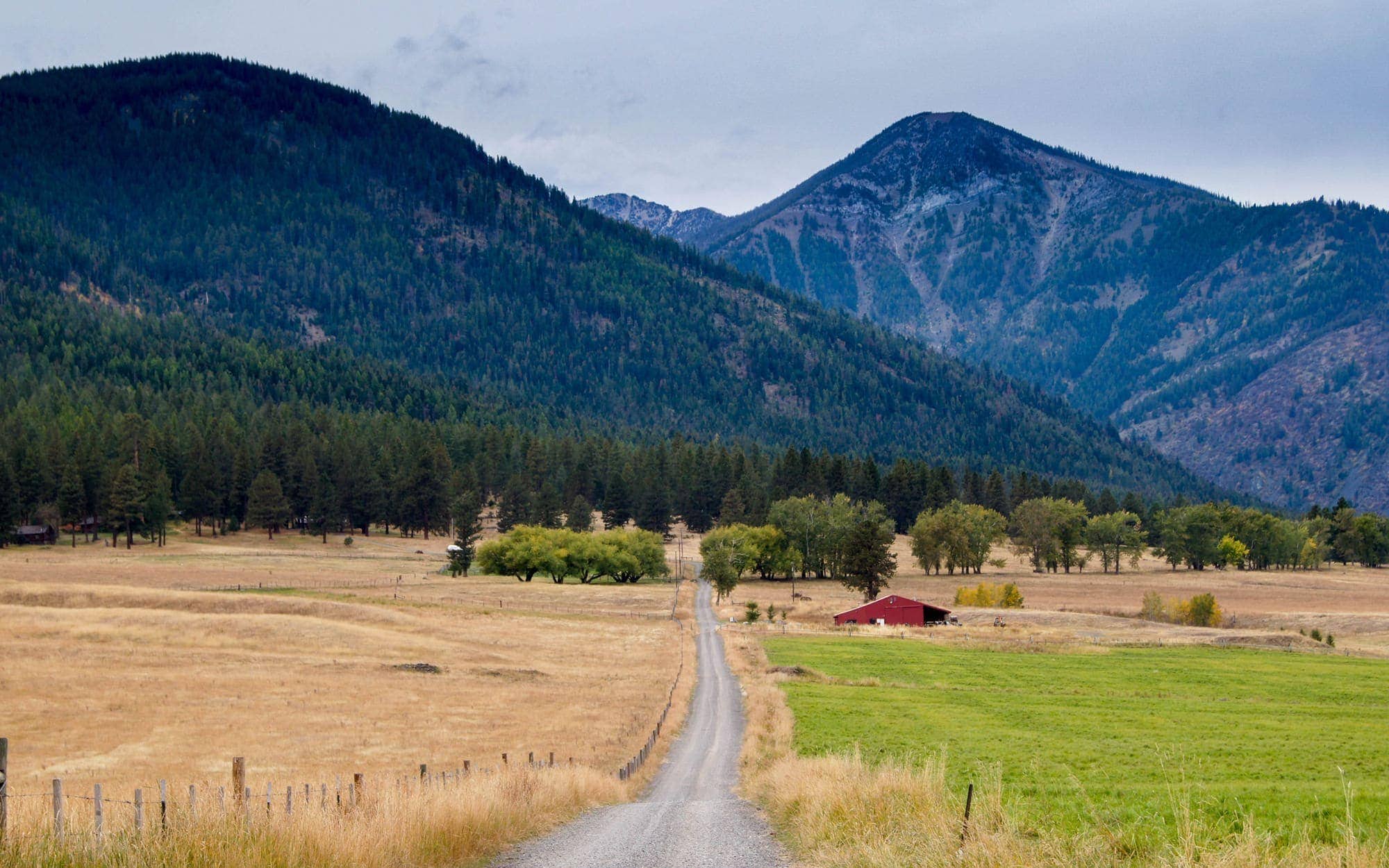 One of the first landmarks you see on the drive in (other than the looming Wallowa Mountains) is a large sign at the entrance to Joseph that reads, “This town is like heaven to us, so don’t drive like hell thru it!”

It is a bold testament to the local camaraderie and pride in this tiny community of a little more than 1,000 people. There is only one way in and one way out. I think part of Joseph’s allure is just how secluded and isolated the town feels. You really have to venture out, even if you’re coming from the nearest large city — it’s an approximate 1.5-hour drive to La Grande. You still must drive the long and lonesome stretch of a little-known highway, OR-82, that dead-ends at Joseph.

The town radiates a strange but comforting vibe; it is no wonder many writers and artists have found their retreat here. The “locus amoenus” is strong in quaint Joseph. 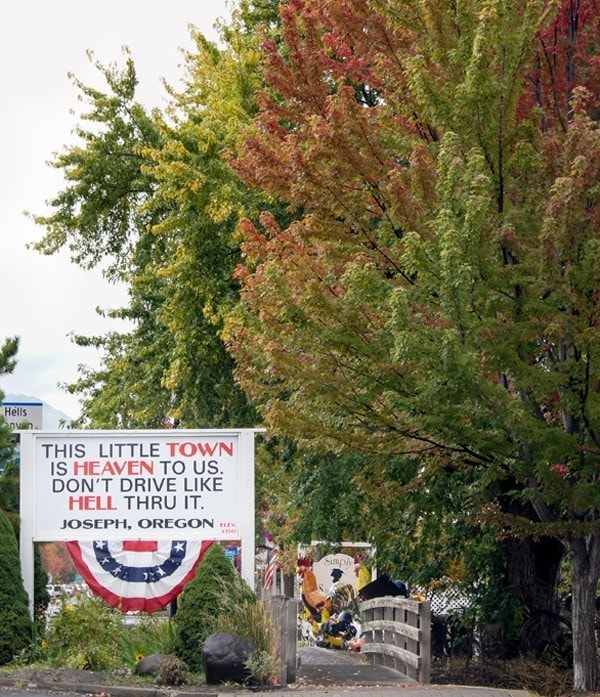 I felt inspiration percolating the entire time, the jagged mountain peaks and rolling wisps of fog captured my imagination.

There was little more than a dozen people ever milling about downtown, and a few loose bird-dogs sprinting down Main Street. The city park was empty. While we watched our daughter play, an elderly man walked around the perimeter of the small park to an apple tree, solely standing in the far left corner, brimming with ripe delicious apples. 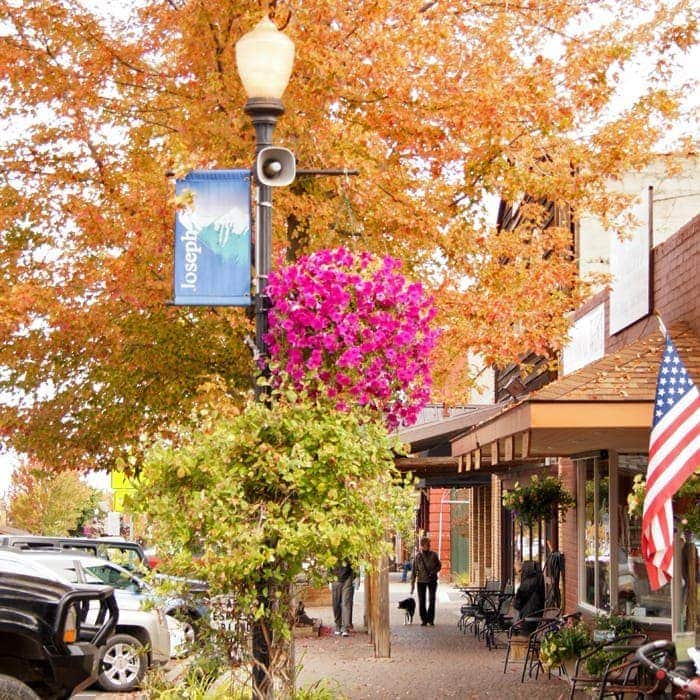 Walking through downtown Joseph there are bronze sculptures, hanging flower baskets lining the street and American flags. The storefronts are mostly art studios as well as some chic cafes. The buildings all appear to be historic and well preserved. 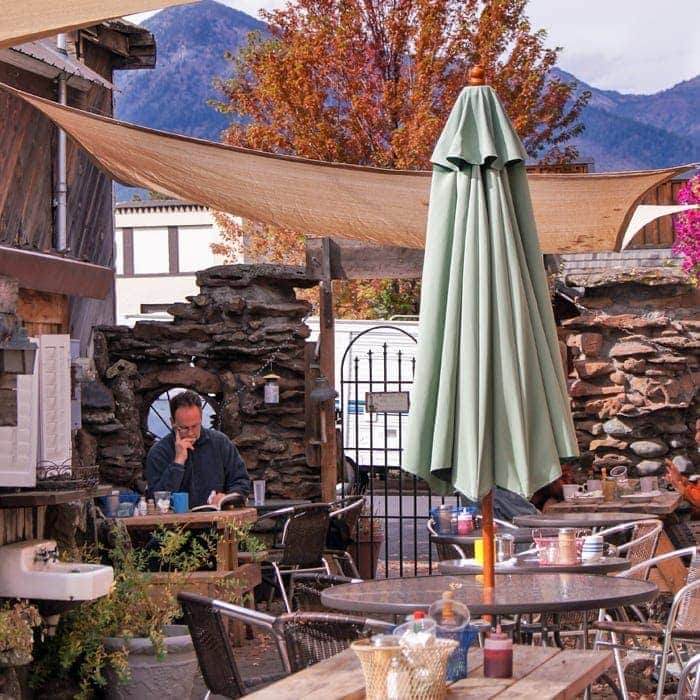 We loved having breakfast at the Old Town Café, which seemed like a nexus for locals and tourists, serving classic comforts in a tiny building with a nice outdoor seating area built from old stones and vintage décor.

We also visited Arrowhead Chocolates on Main Street to have a cup of coffee; we both ended up getting a matcha latte, which was perfect for the then-autumn climate. They have a very nice and relaxed area to sit and gaze at the mountain tops from their front windows.

The people of Joseph literally live amongst the deer and elk harmoniously.

I have never seen so much wildlife, so close to humans, beyond a zoo or national park. While we were unpacking our luggage into our tiny cabin, which had an inviting fireplace that we immediately lit, I hear my wife let out a surprised scream. A deer had snuck up behind my back and was standing less than two feet away from me. I turned around, standing at the trunk of the car and found myself face to face with a mule deer. His glossy black eyes looked right through me, the antlers stood tall above me, the only thing I could do was greet it with a friendly “hello.” I slowly walked backward into our cabin and with each step back that I took, the deer stepped forward, slowly approaching me and our cabin’s doorway. This deer walked up the doorsteps and would have come inside if we allowed it. 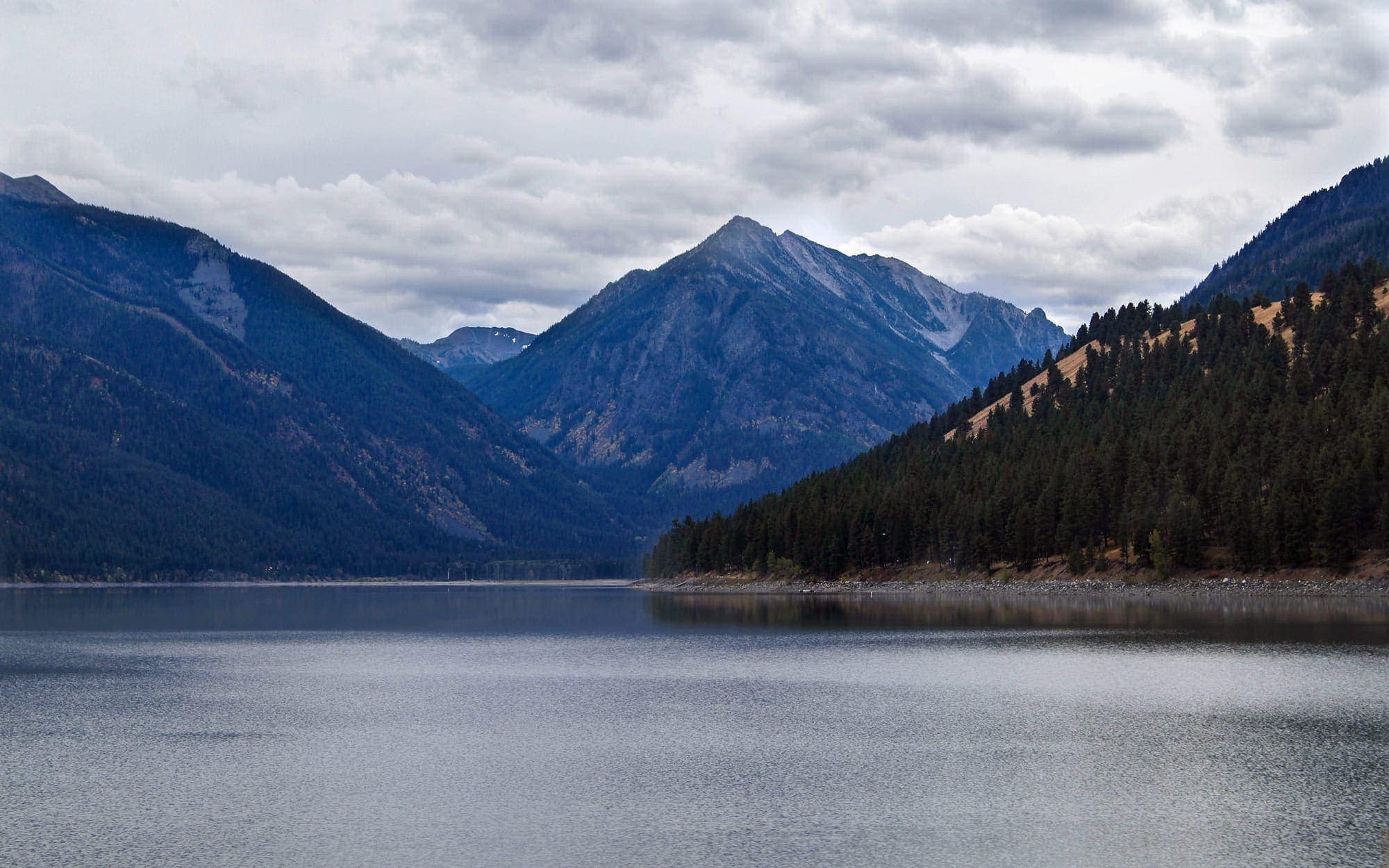 We stayed in a cabin at Eagle Cap Chalets, a romantic getaway for our third year wedding anniversary. The majority of cabins and lodging encircle the tranquil Wallowa Lake.

You have to drive around the lake to reach the resort area, which is a mesmerizing five-minute drive.

One of the best ways to fully experience the majesty of the Wallowas is to take the Wallowa Lake Tramway up the 8,000′ peak of Mt. Howard. It holds the record for being the steepest four-person gondola ride in North America. There is a small restaurant and bar at the top with live music in the summer season. 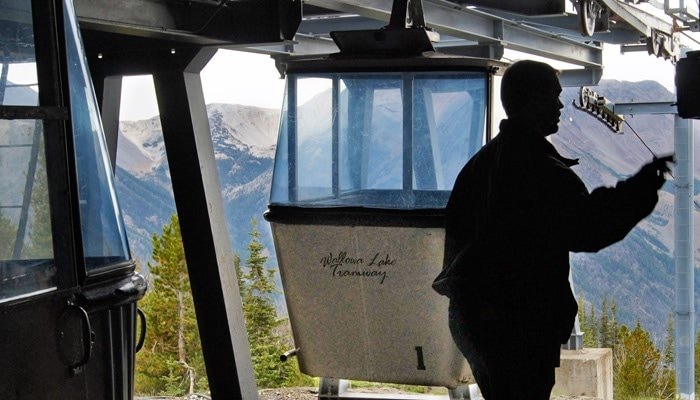 Along the way, we visited the gravesite of Chief Joseph, the most legendary and iconic Native American in history, at the base of Wallowa Lake. His tragic love story with his land is of the likes of a Shakespearean play and romantic as a song Tchaikovsky played. The lake is a deep blue hue, unlike any I have seen (living in Bend, I am fortunate to have seen a good share of mountain lakes), twinkling under the sunlight, reflection-less and surreal. 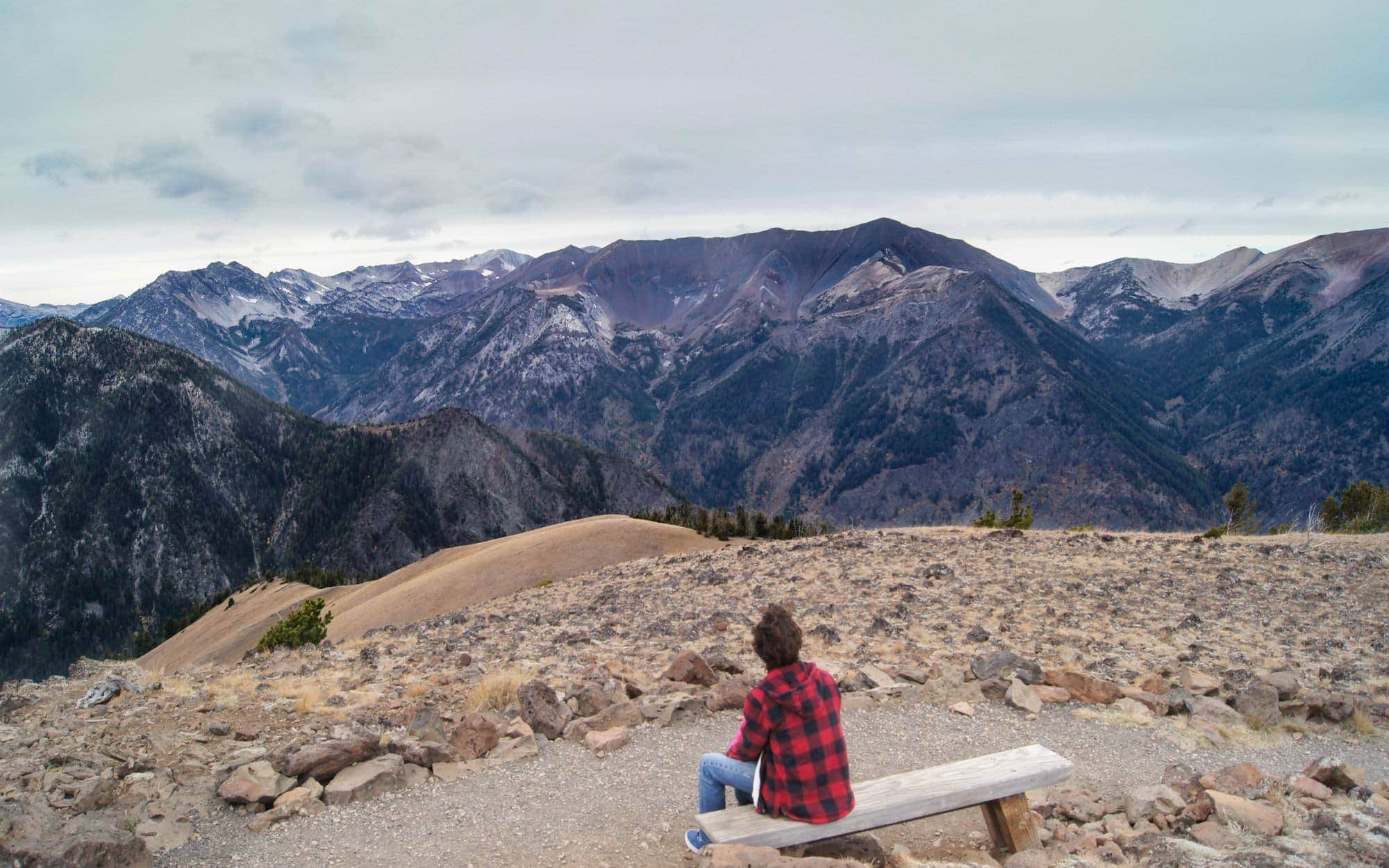 The colorful contrasts of Joseph are beyond description, from the auburn and blazing fall tree colors to the moody deep and dark waters and gray misty mountains.

The artistic and contemplative town carries a presence that echoes from within the valleys of the mountains. It’s an eerie feeling, a notion of strong living and fragments of deeply felt emotion, like shards of pottery at an archaeological dig. It is hard to put a finger on it, but the best way I can describe the experience of Joseph is that the Wallowa Mountains have this presence to them and cast a surreal shadow over the town, its inhabitants and visitors.

The nearby local brewery, Terminal Gravity in Enterprise, has a slogan that makes perfect sense after you’ve experienced this secret slice of heaven in Oregon: “Middle of Nowhere, Center of the Universe.” I couldn’t have said it better. You have to go there to truly understand. Maybe it is the long journey to get there, and all of the strange and functional ghost towns you travel through along the way, but once you get there you truly feel that you have arrived somewhere special.

Mitch Wiewel
Mitch Wiewel is a freelance writer and traveler living in Bend with his wife and daughter. A Midwest transplant from Iowa, Mitch grew up with a love of nature, books and writing. He keeps a notepad close by and enjoys outdoor family adventures including attending bluegrass festivals. Dreaming of a Walden of his own, his favorite author is Henry David Thoreau.

Enterprise, Eastern Oregon
Is any of the information on this page incorrect? Suggest an update
Ready to hit the road? Bring our travel magazine along.