Ancestors of the Coquille Indian Tribe flourished in Southwestern Oregon for thousands of years, roaming a homeland that stretched across more than 1 million acres.

Uprooted and nearly erased in the 19th century, the Coquille people clung to their tribal identity and culture.

Today the Coquille (pronounced ko-kwel) Indian Tribe numbers nearly 1,200 people. It is the Coos Bay area’s second-largest employer, active in hospitality, forestry, health care, construction and other ventures. It proudly practices the ancient tradition of potlatch, employing its resources to enrich the whole community. The tribe’s unofficial motto is, “Take what you need and leave some for the others.”

Since it was restored to federal recognition in 1989, the Coquille Indian Tribe has strived to rebuild its heritage. Its members include virtuoso artisans in beading, basket weaving and wood carving. Nearly forgotten languages are reemerging, as are tribal ceremonies.

Since its restoration, the tribe has slowly regained about 10,000 acres of its homeland, most of it wooded. The tribe’s loving management of this land has earned it national recognition for sustainable forestry.

Kilkich, a housing development on tribal land near Charleston, is a tidy community of rented and owner- occupied homes surrounding the tribe’s medical and educational facilities. The tribe takes special pride in its Community Plankhouse, a traditional cedar-built gathering place for feasting, drumming and dancing. 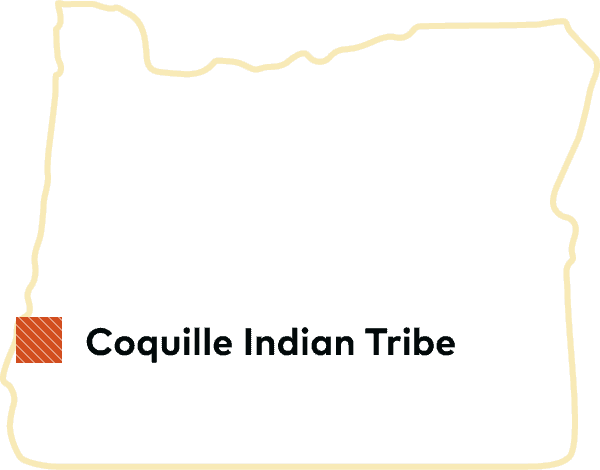 More Things to See and Do

The Meanings Behind Oregon’s Place Names