From freestyle ski and snowboard camps, to top-tier race camps, to engaging adult camps there's a camp for you.
Annie Fast,  Author
Advertisements

Timberline Lodge is renowned worldwide for its year-round skiing and snowboarding. During the summer months, the ski area focuses on the two upper-mountain lifts—Palmer and the Magic Mile, which transport visitors to an elevation of 8,540 feet on the southeast facing flanks of Mt. Hood to ride the 2,500 vertical feet back down to the Timberline Lodge base area.

The Magic Mile chair was originally installed in 1938 and is presently in its third incarnation as a detachable high-speed quad. Timberline installed the upper Palmer lift in 1978 specifically for summer glacier access. The first summer ski camps began establishing themselves around 1956 and quickly multiplied with lodges in nearby Government Camp and along Highway 26. Nowadays the uppermost glacier serves as the official training site for the U.S. Ski and Snowboard Teams, with manicured race lanes, parks and pipes providing the ideal venue for world class skiers and snowboarders to improve their skills and their times.

While the slopes of Timberline are open daily to all skiers with a daily lift ticket, the variety of summer camps are a great way to improve your skills and experience summer skiing and snowboarding, while taking advantage of the huge variety of off-hill experiences from mountain biking, waterfall hikes and swimming in the lakes, to exclusive top-tier skateboard facilities and trampoline parks for dialing in freestyle moves.

What can I expect from summer skiing & snowboarding?

Unlike winter snow, summer snow is predictable with firm conditions in the morning—ideal for racing and carving, then as the morning progresses, the snow softens—ideal for learning jumps and riding park. The camps spread solar salt on jump lips and the halfpipes in the early afternoon to keep the obstacles in prime form as the sun heats up. The glacier is all above treeline, so it’s a wide-open snowfield, with minimal natural terrain features, making it very easy to navigate (although be aware of foggy or cloudy conditions, which can create whiteout conditions). Also of note, when the sun is out at this altitude it’s very important to lather on the sunscreen and always use eye protection.

The on-hill facilities high up on the Palmer Glacier at Timberline include Timberline’s Freestyle Training Park featuring progressive jump and transition features, rail and jib features of all shapes and sizes, a 22-foot superpipe and a skier/boarder cross training course accessed by four rope tows. This shared park is accessed by several of the camps below, as well as through daily FTC daily public access passes for a daily access fee plus a lift ticket.

Founded in 1989 by Tim Windell, Windells Ski Camp has evolved to become the top summer freestyle ski camp in the world. Windells stands out for its incredible coaching staff (including a new batch of world-class guest coaches each session) and its off-hill facilities, which it shares with High Cascade Snowboard Camp and Seek Skateboard camp.

Campers are paired with a dedicated coach for their entire session in a group with skiers of similar skill level. The day can include everything from riding the public lap park, to sessioning individual park features, to perfecting runs through the skiercross course. Professional skiers partner with the camp to train on-hill and interact with campers in formal clinics and during fun casual sessions.

Off-hill the camp shines with a 28-acre campus tucked back in the forest of Welches, Oregon, complete with a sprawling 12,000-square-foot indoor building out back (B.O.B.) housing a concrete skatepark a trampoline park and foam pit, plus an outdoor skatepark, a climbing wall and a full roster of outdoor activities to fill the afternoon.

Windells has a variety of camps for all ages from youth camps for ages 9–12, family camps, and adult camps for ages those 18–20 and those 21-plus. The popular adult camps are based in the nearby village of Government Camp, which include an alternate roster of activities including a brewery tour in Hood River. Windells offers five eight-day summer sessions from June through July.

Get On Board at High Cascade Snowboard Camp

High Cascade Snowboard Camp (HCSC) is recognized as the premiere summer snowboard camp in the world. Founded in the summer of 1989, the camp has played a huge role in the history and cultural lore of the relatively young sport of snowboarding. In the mid-90s, a knee-high Shaun White spent his summers training in the halfpipe long before any Olympic gold medals. HCSC has been host to legendary sessions from record-breaking quarterpipe airs to magazine cover-worthy jump sessions by top professional riders.

While these accolades are noteworthy, what really draws snowboarders from across the country is the epic riding and coaching. HCSC is renowned for great coaching on ideal freestyle terrain, from all levels of jumps to boxes and rails to wide-open lanes for perfecting the carve. HCSC on-hill facilities in the shared Timberline Freestyle Training Center are accessed by Timberline’s two upper high-speed lifts, as well as a network of four rope tows allowing campers to session specific features or pipes to improve skills. Campers are grouped with riders of similar skill level and a certified coach for the whole session. The coaches identify the skills each rider wants to improve on and guides them through tips and tricks to improve their riding throughout the session.

HCSC also shares its off-hill facilities with Windells Ski & Skate Camps, which makes for awesome afternoons of skateboarding, trampoline and foam pit training, as well as structured activities from hiking to dodgeball games at Windells 28-acre campus. High Cascade Snowboard Camp has a variety of camps for all ages from youth camps for ages 9–12, to family camps, to adult camps for ages 18–20 or ages 21-plus, which are based in nearby Government Camp. HCSC offers five eight-day summer sessions from June through the end of July.

Founded by Mike Annett, Mt. Hood Summer Ski Camps (MHSSC) is renowned as the camp offering training for all types including ski racers, mogul skiers, freeskiers, snowboarders and snowboard racers—it also stands out as one of the most affordable camp options on Mt. Hood. MHSSC is one of the longest-running camps, with 40 years of experience as a family-owned camp. MHSSC operates year-round with a home base at a pair of modern lodges located five miles past Government Camp.

On-hill during the summers MHSSC operates a network of private terrain parks, race lanes and mogul lanes across the glacier. Off-hill, MHSSC campers afternoon activities include rock climbing, kite-boarding, trampoline, a challenge course, mountain biking, hiking and more, all accessed from the main lodges tucked back in leafy forested setting.

Mt. Hood in the Summer is a Ski-Racing Mecca

In addition to the above camps, there are a variety of camps dedicated to high-level ski racing including Tichy Racing, Ligety-Weibrecht Ski Camp, National Alpine Ski Camp, Keely’s Camp (an all-female race camp) and many more. Whether you’re an aspiring Olympian, a dedicated athlete, or an enthusiastic adult looking to improve your skills, there’s a camp for you. 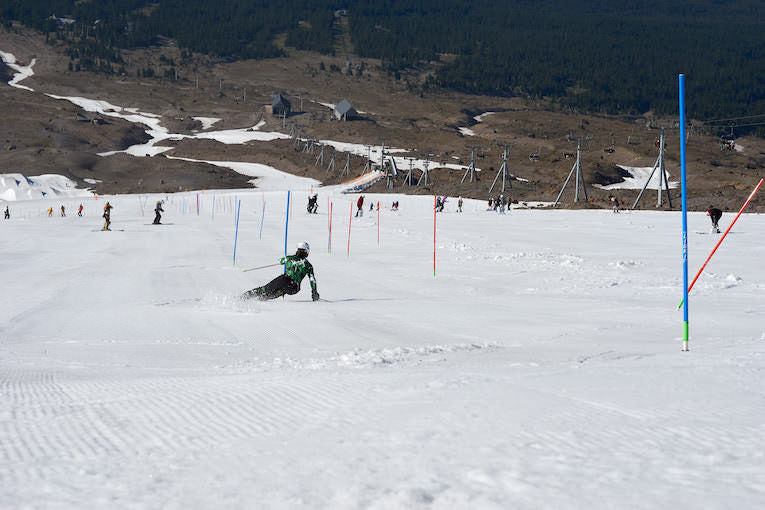 Timberline rolls out a series of race and freestyle camps for intermediate through advanced skiers and snowboarders during June and July. There are three different camps—a youth racing camp, a masters adult race camp and freestyle camps. The camps are offered either as multi-day camps or overnight camps with meals and slopeside lodging in a chalet dorm room slopeside at the historic Timberline Lodge.

Annie Fast
Annie Fast is a lifelong snowboarder and traveler. She was the editor of TransWorld Snowboarding Magazine and prior to that worked at the summer snowboard camps on Mt. Hood. Annie writes about outdoor adventures from her home in Bend.

All the Skiing at Mt. Hood

An Active Summer Day At Timberline on Mt. Hood

Summer Camps in the Gorge

Oregon is the Place for Spring Skiing & Snowboarding

Everything You Need to Know About Spring Skiing & Riding at Timberline

All the Skiing at Mt. Hood

An Active Summer Day At Timberline on Mt. Hood

Summer Camps in the Gorge

Oregon is the Place for Spring Skiing & Snowboarding

Everything You Need to Know About Spring Skiing & Riding at Timberline

Is it better to visit Mt. Hood in the winter or summer?

There are so many fun things to do on Mt. Hood in the summer. It’s actually my favorite season on the mountain (probably because I am not much of a skier). Though, there are plenty of other things to do on Hood in winter if you don’t ski! Do you like to hike? There are many…

Cari Gesch
Is any of the information on this page incorrect? Suggest an update
Ready to hit the road? Bring our travel magazine along.