Oregon Islands Refuge includes over 1,400 coastal islands, rocks, and reefs scattered along the 320 miles of the Oregon coast, from Tillamook Head south to the California border. Most of this refuge is included in Oregon Islands Wilderness Area. The majority of Oregon’s estimated 1.2 million seabirds, including 13 different species, annually breed on this refuge. Refuge sites are also used by brown pelicans (endangered species), bald eagles (threatened species), and the recently delisted peregrine falcons and Aleutian Canada geese.

The rocks, reefs, and islands are also important breeding, pupping, molting, and haul out sites for thousands of seals and sea lions to rest. The Rogue and Orford Reef units of this refuge constitute the largest pupping area for the Federally listed threatened Stellar’s sea lions in U.S. waters south of Alaska, with 700-800 pups produced annually. Simpson Reef at Cape Arago is the world’s northernmost pupping site for northern elephant seals, and is the largest marine mammal haul out site on the Oregon coast.

Although many of the offshore islands can be viewed from land, the only portion of Oregon Islands refuge that is open to the public is Coquille Point, located just west of Bandon. This picturesque headland provides a fantastic vantage point for observing seabirds and marine mammals. Other major seabird nesting islands and marine mammal use areas can be viewed from the refuge’s viewing decks located on Oregon State Park lands, including Cape Arago and Cape Meares. 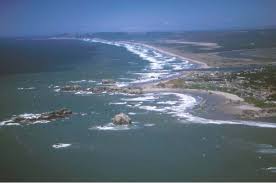 Oregon Islands National Wildlife Refuge
Is any of the information on this page incorrect? Suggest an update
Ready to hit the road? Bring our travel magazine along.