Bluebill Trail is the southern most trail in the Oregon Dunes circles the 60-acre dune lake. In the past 10 years, water levels in Bluebill Lake have varied. At times, it looks like a grassy meadow and at other times, lake waters lap at the boardwalks. Look for hummingbirds diving from great heights during spring courtship. In the fall, the area around the lake boasts a diversity of mushrooms. The brown color of the water is due to slow decomposition of leaves and grasses which are food for lake residents like frogs, salamanders, and fish.The eastern portion of the trail provides views of Bluebill Lake as it winds through Western hemlock trees and huckleberry and salal bushes. At the southern end of the lake, an extensive boardwalk protects the wetlands while allowing you to look closely for tadpoles and aquatic insects. The western part of the trail divides, giving you a choice of following the edge of the lake for a look at marsh plants and animal tracks, or following a parallel trail through open shorepine forest. Either route has good birding opportunities. 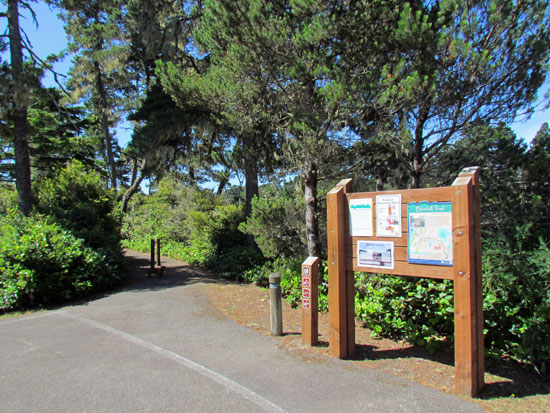 Bluebill Trail
Is any of the information on this page incorrect? Suggest an update
Ready to hit the road? Bring our travel magazine along.