Columbia River Carp on the Fly

The desert sun warms the shallow water. Golden shapes cruise the sand bottom, barely visible in the increasingly overhead light. One briefly pauses; I cast. It moves. It eats. Suddenly, a hundred feet of fly line strips out in a nanosecond as 12 pounds of pre-historic muscle heads towards wine country. And the day is just getting started.

While the Columbia River’s salmon and steelhead are the most iconic species in the system, the “Big C” has also become ground zero for another notable game fish — a whiskered, invasive redheaded stepchild of the animal kingdom: the common carp. The shoreline structure and flats of the Columbia River provide expansive habitat for this overlooked fishery, as well as the perfect proving ground for fly anglers eyeing a new challenge.

These hard-fighting fish can grow upwards of 20 pounds and are often described as the “golden bone,” a reference to the tropical saltwater bonefish. Like bonefish, they spook easily and are incredibly smart. Accordingly, they are very selective in the flies they’ll take.

Carp fishing is a visual game, and you only cast to the fish you can see. Given this, polarized sunglasses are a necessity to cut surface glare and see into the water. As the best carp fishing often takes place mid-day in summer, sun protective clothing and sunscreens are also a must.

Since carp prefer warm shallow water, we look for them along shorelines and in small coves. They’re mostly bottom-feeders and often root around the mud feeding on nymphs, crayfish, snails, worms, clams and anything else they can find. The Columbia is full of freshwater clams, which led John “Montana” Bartlett — the godfather of Columbia River carp fly fishing — to design a special fly, the Hybrid. It’s a half-worm, half-buggy nymph, and a full on carp-catching machine. Other productive patterns for carp include Bob Clouser’s Swimming Nymph and Jon Luke’s Carp Candy. Variations of color and weight can be the answer when you’re getting rejections, so don’t be afraid to experiment.

Stealth is requisite. Loud footsteps, voices, and splashy casts are all a likely way to spook fish. Slowly walk the banks and along edges of a flat. Look for mud puffs, subtle movement, “nervous” water, and tailing fish. Pay attention to the slower-moving fish, as they are more likely to eat. Eventually you’ll be able to read a fish’s body language and tell if it’s late for a meeting or ready for a snack. 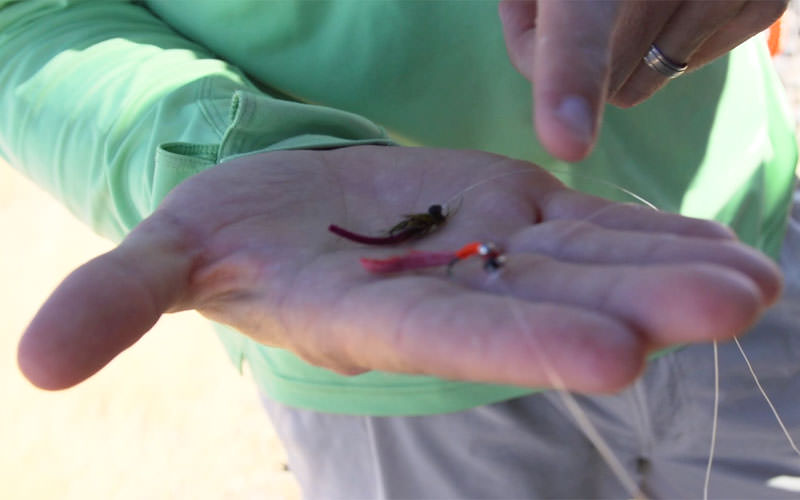 Carp don’t have great sight in the often-turbid Columbia, so once you do spot actively feeding fish, creep up as close as possible to avoid spooking them. Once in range, make a short gentle cast, dropping the fly within inches of the head. These fish won’t move far for a fly so you’ll need to put it right in front of them.

While you won’t need to cast far, a seven or eight weight fly rod rigged with floating line is perfect. Long, 10-foot leaders will allow quieter presentations and 12-pound test fluorocarbon tippet offers abrasion resistance and near invisibility in the water.

Be prepared for hot weather as prime time for carp fishing is after the spring run-off: June, July and August are great. Dig out a map and head to an easily accessed Oregon State Parks site or boat launch. The whole stretch of the Oregon side of the Columbia is prime water.

Downriver (from Portland to The Dalles) offers colder and bigger water, and while more searching may be required, this stretch has plenty of action. Rooster Rock State Park is a popular spot on this section (which also features a clothing optional beach, FYI). From The Dalles, upriver to Umatilla and beyond, the water warms and higher concentrations of fish can be found in the bankside shallows, flats and inlets throughout the area. Nearly any state, county or city park/boat launch with reasonable access, has potential. Be prepared to spend time searching, but don’t discourage. Carp are an amazingly fun, visually rewarding fish that will test your skills and make you a better angler.

Read more about carp fishing on the Columbia River and watch the full-length video at The Flyfish Journal.

Copi Vojta
Copi Vojta hails from the high-and-dry ponderosa pine forests of Northern Arizona via Eastern Oregon, where he learned to stare at water and attempt to catch fish. Leaving Arizona for the trout infested waters of Colorado provided ample opportunity to forego regular adult responsibilities and live among rivers and mountains. A photographer, writer and photo editor for The Flyfish Journal, Copi now resides in Bellingham, Washington where he is slightly more responsible and can be found chasing all sorts of beautiful things. You can find more of his work at www.cbvphotographics.com and www.illcentrifugal.com.

Where should we have our backpacking and fly fishing anniversary getaway?

Backpacking and fly fishing sounds like a great way to celebrate your anniversary! My first recommendation would be the Rogue River. There’s a trail that follows along the river for 40+ miles, with camping areas and even lodging you can reserve if you wanted to have a night of luxury. It’s Wild and Scenic River and…

Allison Hartz
Outdoor Adventure Expert
Is any of the information on this page incorrect? Suggest an update
Ready to hit the road? Bring our travel magazine along.