Bike Newport, Ride Ambassador
Length 28 Miles
Difficulty Moderate i
A ride that’s not for complete beginners but won’t
be a major undertaking for those who ride regularly.
Varying levels of traffic, and could include some
hills, but nothing overly long or steep.
Nearby cities: Newport, South Beach, Toledo, Otter Rock, Siletz
View on Ridewithgps.com Map & Cue Sheet

This unique route lets you explore a spectacular stretch of central Oregon Coast at a leisurely pace, spending most of your time on the beach, not the road. When you do hit the highway, it’s to cross a pair of graceful, picturesque bridges – or to find the brewpub at the end of this route, for a cold beverage that properly celebrates your adventure of putting in 28 miles on the bike.

First, let’s talk logistics: Between the distance and the likelihood of a strong breeze, this is a ride best done as a shuttle; either drop one car in Yachats and drive the other to the start in Newport, or hook up with Bike Newport; they not only will rent you a fat bike for this adventure, they’ll also provide a shuttle for you if needed. The friendly folks in the shop are local experts on fat biking the beach, and they love passing along their knowledge to help you have a good time.

About that wind: On a beach ride, it’s important to know which way the wind is blowing – it’s always best to have the wind at your back, to enjoy the speed of riding a tailwind. Based on prevailing winds, this route is typically best starting from Bike Newport and heading south. Or, if you want to start farther down to avoid some of the in-town traffic, cross the bridge and park at South Beach State Park; head over the dunes to start the ride.

But enough details; let’s talk about why this ride is so much fun! First of all, there’s that “I can ride over anything with my giant tires” exhilaration of riding a fat bike. You can now glide over surfaces that would bog down a “normal” bike like, you know, beach sand. And then there’s the joy of knowing that no one can own the beach in Oregon – every mile of it, from the surf to the vegetation line, is public property. So ride it like you own it, because you do.

Assuming you’re leaving from the shop in Newport, you’ll ride through the tranquil Yaquina Bay State Park, then climb up and over the Yaquina Bay Bridge on Highway 101. This bridge was built in 1934, and its longest span is 600 feet. Stop for a bit to take in the spectacular view from the top. Not far after you finish crossing, a right turn will take you into South Beach State Park, where you’ll get your tires into some sand. Once you’ve hit the beach, point those rubber fatties south and commence your journey along the shoreline.

One of the joys of seeing the world by bike is the sensory input. In a car you’re usually going too fast to get much detail of smells and sounds, and the wind is mostly a product of speed. On a bike, though, scents waft around you, sounds separate themselves out like instruments in an orchestra, and the cool sea breeze brings you that subtle combo of salt and moisture.

The beach is pretty much wide open here, so experiment to find your favorite distance from the water for riding. Nature presents no obstacles until you get roughly 10 miles in, at Beaver Creek. Although it may look a bit daunting at first, just find the footpath bridge that crosses the river, a bit inland.

As you approach the Seal Rocks, these massive rocks will dwarf you – and push you up on the road at Curtis Street, which brings you to Seal Rock State Recreation Site. This is an ideal place for a lunch break; hike on out to the cliff edges and enjoy the spray displays as waves hit the rocks below. Refreshed by your break, continue back on the road to circumvent the large rock formations; stay on the road until you reach Quail Street on the right. Take the turn and pedal back onto the beach; you’ll get the chance to ford a couple stream crossings down to Waldport, which only reinforces your two-wheeled invincibility.

Savor the sand all the way down the beach to the Bayfront Beach Club, where you’ll turn into Waldport proper and head south on Highway 101 over the arching Alsea Bay Bridge, which was opened in 1991 to replace the original 1936 span. Veer back over to the beach at your first chance after the bridge, and cruise a heavenly 7 miles, passing multiple recreation sites and official beaches. When the sand ends, hop up onto a single-track trail that will guide you into Yachats. It’s been a great day in the saddle, so it’s only proper to honor your accomplishment with a big meal and local beer at Yachats Brewing.

If you go: Wherever you go fat biking on the Coast, check the tides and try to go during low tide as much as possible. Beware of sneaker waves and stay off rocks and small, enclosed beaches. Respect the sensitive micro-environments, whether it’s birds or anenome you encounter. In particular, it’s critical for people and pets to avoid areas that are closed due to western snowy plover nesting season, March 15-Sept. 15. Look for bright yellow signs nearby Oregon’s beaches and more info about how to protect this threatened species here). 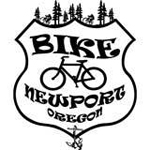