Pineapple Express Adventure Rides, Ride Ambassador
Length 10 Miles
Difficulty Moderate i
A ride that’s not for complete beginners but won’t
be a major undertaking for those who ride regularly.
Varying levels of traffic, and could include some
hills, but nothing overly long or steep.
Nearby cities: Gold Beach, Wedderburn, Ophir, Brookings, Harbor
View on Ridewithgps.com Map & Cue Sheet

The words “banana belt” and “Oregon” don’t necessarily go together instinctively. And yet, the South Coast is a place where you can rely on warmer temperatures than the rest of the state during those dark, wet months when you may not even want to ride at all. So head to the southwest corner of the state – the beach is warmer here in the winter, it’s just as nice during the summer, it’s much less crowded than the northern stretches… and thanks to Oregon’s all-beaches-are-public law, you can ride it to your heart’s content.

The Banana Belt Loop showcases some of the best beach/single-track fat-biking in Oregon. If you’ve never been here, you’ll feel like the Spaniard Sebastian Vizciano, who first saw the cape in 1603 and marveled at the caves, jagged shoreline and low-tide treasures he found here. One difference, of course, is that you’re on an all-terrain, two-wheeled machine he never dreamed of.

Besides tides, a second thing you want to consider when riding at the coast is wind. There’s likely to be a strong one, in a particular direction, depending on the day. You can start or end this ride based on how you want to deal with the wind. (It tends to blow more in the afternoon.)

At the north end of the route is Cape Sebastian State Scenic Corridor (hey, he got there first, he got to name it). Near the south end is Pistol River State Scenic Viewpoint, and Lola Lake is its southernmost point. And all of this ride is in the midst of one of the truly spectacular sections of the coast.

For the purpose of this description, we’ll start at the north end. From the parking lot at Cape Sebastian Corridor, choose any of the paths that lead down to the beach and then spend a few minutes just getting a feel for the sand conditions at varying distances from the water.

Before you head south on the loop, though, take the time to ride north a mile for stupendous views of Cape Sebastian and Hunter’s Island. Then point south and get your groove on.

Make sure you take some time along the way to explore the rocks and tide pools around Meyers Creek – you’re likely to see everything from vivid sea stars to sea anemones and other intertidal wildlife, all enjoyed to the soundtrack of shorebirds like the black oyster catcher perched on the sea stacks rising like sentinels above the sand.

You’ll cross a few streams along the way, including Meyers Creek and the Pistol River; nothing to worry about, unless it’s winter or spring and the Pistol is running high – in that case you’ll need to be cautious. Like many of Oregon’s coastal rivers that don’t have jetties, the river gets “bar bound” in the middle of summer, meaning it no longer flows into the Pacific. It also changes course seasonally, so where you cross it may actually differ throughout the year.

About 1.7 miles south of the bridge that crosses the Pistol River, you’ll see a sign where the dunes meet the beach, designating the Oregon Coast Trail. This is where you’ll ride inland to ride around Lola Lake; it’s actually more of a wetland than a traditional lake, but the loop ride around it is delightful single-track on packed sand and dirt. It’s about a mile and half around the loop – and then you turn north back to the start.

Welcome to the banana belt.

Wherever you go fat biking on the Coast,

and try to go during low tide as much as possible. Beware of

and stay off rocks and small, enclosed beaches. Respect the sensitive micro-environments, whether it’s birds or anenome you encounter. In particular, it’s critical for people and pets to avoid areas that are closed due to western snowy plover nesting season, March 15-Sept. 15. Look for bright yellow signs nearby Oregon’s beaches and more info about how to protect this threatened species here). 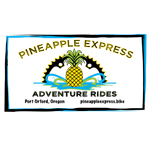 Pineapple Express Adventure Rides
Founded in 2017 by Erin Kessler, Pineapple Express Adventure Rides (P.E.A.R) creates memorable off-road bicycle adventures specifically tailored to your skill level and the type of off-road cycling you'd like to experience on the Southern Oregon Coast. P.E.A.R. can assist in booking lodging and customizing your South Coast bicycling adventure from Coos Bay to Brookings.
More rides by this ambassador on rideswithgps.com