One Tough Mother’s Oregon Legacy: A Tribute to Gert Boyle

Hers was among the most recognizable faces in Oregon. When Gert Boyle passed away at age 95 in November 2019, she was known the world over as the Tough Mother of Columbia Sportswear, headquartered in Washington County with operations across the globe. The woman who was strong as nails, who escaped Nazi Germany, saved the family business from bankruptcy and gave the world millions of Bugaboo jackets. This was the groundbreaking female business leader who was deflecting guff long before anyone else was “leaning in.”

Gert was the epitome of Oregon’s state motto, “She flies with her own wings,” inspiring future generations of women in business to shatter glass ceilings. “It’s become more acceptable in business to be a woman,” Boyle told the new group of Women in Business leaders at the University of Oregon in 2006. “You’ve got the world by the tail. Don’t let anyone discourage you because you’re a woman.”

Mother Boyle could size you up with a squint and deliver the perfect, pointed, hilarious line for any occasion. She was, as Oregon Gov. Kate Brown put it, everything Oregonians think of when we think of our breed: We are mavericks, innovators, creators.

“The company’s existence is due to her personality,” says her son, Tim Boyle, CEO of Columbia Sportswear, the onetime hat company that Gert shouldered during a journey to become a global sportswear brand with $2.8 billion in sales. “We’re still sort of grappling with how to keep her spirit alive in the brand without it being phony.”

One way to keep her alive, says Tim, is by holding on to what the company calls “Gertisms” — Gert Boyle quotables that encapsulate her philosophies. These are some of his favorites.

How does Oregon grapple with the loss of a bona fide icon? A person impossible to duplicate, universally respected — perhaps even feared — but also universally adored?

Oregonians are still answering that question, but hundreds of them started by streaming into Veterans Memorial Coliseum one sunny December morning to celebrate the life of their beloved Tough Mother. The program was replete with beautiful music and remarks from state officials, television personalities, family members and other Gert lovers. There were tears, plenty of laughter, a few swears. Everyone left with a recipe card for Ma Boyle’s apple pie, emblazoned with the quote: “It’s perfect. Now make it better.”

Kerry Tymchuck, who worked with Gert to write the book that told her life story — “One Tough Mother: Success in Life, Business and Apple Pies,” published in 2005 — described the impact of her presence in the world like this: “You don’t have total strangers light up at the sight of you without knowing you have made a difference.”

“I’ve gotten literally hundreds of letters,” Tim says, shaking his head. “I’m just shocked by how many people — who never met her — were deeply touched by her life.”

“If you ask me, Mother Nature’s not that tough.”

So what was it like? To have a mom like Gert? For Tim, who was a senior at the University of Oregon when his father and the former CEO of Columbia Sportswear passed away suddenly in 1970, it meant that he came home from school to help his mom and to take a front-row seat for her transformation into the savvy businesswoman that the rest of the world got to know.

“She had an instinctive understanding of what consumers were demanding and a toughness to make people perform,” he says. “That combination was a significant change from being a mom and a bad cook.”

Truly, how else do you describe a girl with no knowledge of English who thrived in Portland as an immigrant with her family at age 13 to escape the antisemitism of the Nazis? Or a housewife who had to jump in and take over the family business? Who helped build that business to a global sportswear giant? Who, at 86, thwarted a team of would-be kidnappers? It’s true: Three men served time for their plot to hold Gert at gunpoint at her home in 2010, demanding her jewelry and money and attempting to hold her for $300,000 ransom.

The thieves may have underestimated her. Ma Boyle managed to trigger the silent alarm and then ran to answer the door when police arrived. Later visited by a West Linn police officer checking on how she was doing, she famously sassed: “I was fine, until you walked in here with that North Face jacket on.”

“Early to bed, early to rise, work like hell and advertise.”

Yes, about those advertisements: In 1984 Portland ad agency Borders Perrin Norrander launched a campaign that would last more than two decades and put Gert’s personality on an international stage. “To be really frank,” Gert told AdAge magazine, “how many ways can you make a coat? There’s a front, back and two sleeves.” Advertising was Columbia’s path to originality.

Gert didn’t put much stock in her role as a capital-W “Woman Business Leader,” despite her role as an executive in a male-dominated industry. But she heartily embraced her role as the Tough Mother of Columbia Sportswear, a woman capable of strapping her son to the top of an SUV or dropping him off at the top of a desolate peak, all in the name of product testing.

Asked about his favorite Gert ad lines, Tim picked one that didn’t involve him being dragged through the mud or flattened by a Zamboni. “In one she’s zipping up a jacket, and it says: ‘In Oregon, this is sexy.’” 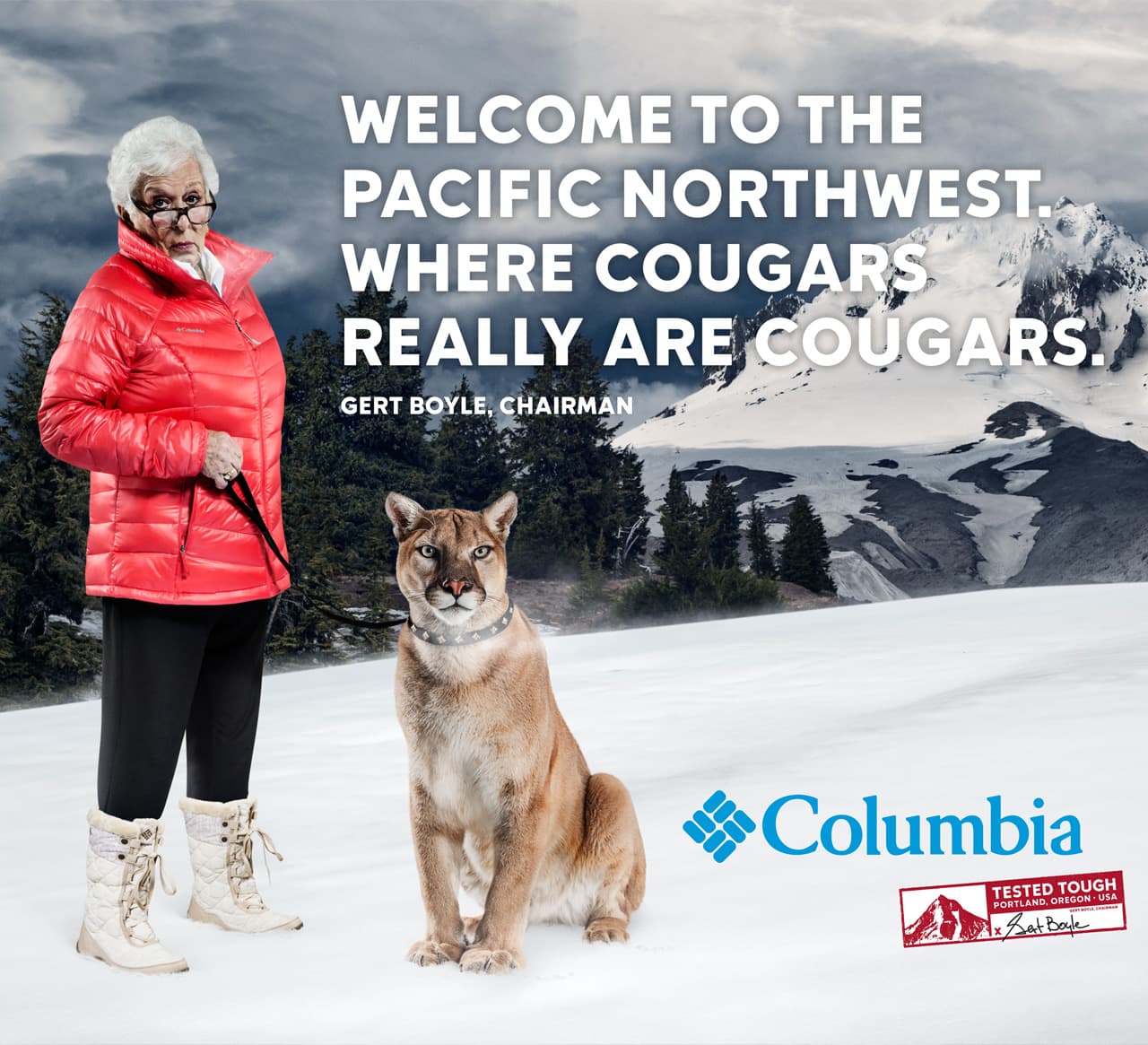 “From a woman who prefers her diamonds black.”

Gert Boyle loved creating products to help people enjoy the outdoors — from black-diamond ski runs to scenic rivers for fishing. With the bracelets she liked to wear clanking around her wrists, she wrote lots of checks — she was ridiculously generous. A stalwart supporter of the Special Olympics, she outfitted the U.S. team in 1995 and donated proceeds from her book to the charity.

In 2010 she endowed the Hildegard Lamfrom Chair in Basic Science at the Knight Cancer Institute at Oregon Health and Science University with $2.5 million in honor of her sister, Hildegard, who died from a brain tumor in 1984. And when Nike co-founder Phil Knight announced a fundraising challenge for the cancer institute in 2013, offering to match $500 million in donations, Gert slipped an envelope across the table to her friend Dr. Brian Druker, the center’s director. For a while, she tried to keep her $100 million donation — and the largest private gift to the challenge — anonymous.

When the word got out, she made a joke of it, shooting a video with Druker speculating that “a very wealthy man” must have made the donation, then raising a glass of lemonade with a toast to “kick cancer’s @#*!”

“Don’t get hung up on ‘should’ve’ — yesterday’s never gonna come around again, so get on with it.”

“We had her for a long time,” says Tim when anyone expresses their condolences. His loss is our loss — Oregon’s loss. And Gert Boyle, the self-identified “cranky and crotchety old broad,” had a soft spot for her adopted home.

For one thing, she loved Oregon’s outdoors and running her business in what she called the perfect laboratory for rain gear. When her father bought the hat company that became Columbia, he renamed it for the river that runs along Oregon’s northern spine.

“She loved the incredibly rich outdoor tradition and all the activities you can do here,” her son says. “Where else can you ski and surf in the same day?” The family learned to ski on Mt. Hood because Gert had skied as a child in Germany. They spent time fishing together, went on trips to Central Oregon to find the sun. And — always a mercenary for the brand — everywhere she went, she was never afraid to call you out for failing to sport the Columbia logo.

Christina Dyrness Williams
Christina Dyrness Williams is a writer, mom, travel junkie and communications pro based in Portland. Her writing has appeared in places like the Portland Business Journal, Oregon Business magazine, The Oregonian and various corners of the Internet.
Is any of the information on this page incorrect? Suggest an update
Ready to hit the road? Bring our travel magazine along.