Oregon oenophiles this year will be able to sip and savor three special-release wines that are the happy result of a mission-driven operation: To save about 150 tons of precious winemaking grapes from small family farms in Southern Oregon’s Rogue Valley.

A number of large purchase deals fell through at the eleventh hour before harvest in fall 2018, following concerns about the impact of summer wildfires. So winemakers came together to address the unprecedented crisis, and Oregon Solidarity Wine was born.

“We wanted to show that really beautiful wines come from Rogue Valley, and this year is no different,” says Christine Clair, winery director at Willamette Valley Vineyards, just south of Salem. “There should be no concerns about the quality of their wine during the wildfire season.”

When the call to Clair came in that October morning, it was already late in the season, and Willamette Valley winemakers had a full crop of grapes, due to warmer-than-average temperatures. But Clair spent the weekend reaching out and heard similar stories from 16 small Rogue Valley growers whose livelihoods depended on their grapes. She forged ahead with a plan.

“[Winemaker] Jim Berneau and I wanted to go to Southern Oregon to meet the growers, see the grapes, taste them and make sure they were viable to make high-quality wine,” recalls Clair. Hatching a plan with winemakers at King Estate Winery, they brought lawmakers and media with them as they picked up clippers and white buckets and started harvesting the first fruit for what became the Solidarity wine.

Altogether they purchased 150 tons of grapes from six Rogue Valley growers for full market price — worth more than $300,000 — using the grapes to produce three varietals of Oregon Solidarity Wine that will sell nationally in limited releases throughout 2019. Net proceeds of Oregon Solidarity Wine will go to the newly established Rogue Valley Vintners — a nonprofit membership organization established by the region’s winemakers. The wine will proudly sell under the Rogue Valley Appellation, the southernmost wine-growing region in Oregon, known for their diverse range of climates and grapes.

The deal “saved us from what was looking to be a terrifying year,” says Michael Moore, owner and vineyard manager of Quail Run Vineyards in Talent, just outside of Ashland, whose parents planted some of the first grapes in the region more than 30 years ago. Losing a buyer for the grapes “would have been all of our profit for the year,” he says. Seeing the partnership come together reaffirmed his passion for Oregon wine, he says: “It makes you feel so proud to be part of an industry that is about people and relationships. Everyone has a shared goal of making great wine.”

The limited releases of Oregon Solidarity Wine include:

A rosé of pinot noir will hit retailers’ shelves the week of March 1 with a suggested retail of $16.99. Made at The Eyrie Vineyards in McMinnville and Silvan Ridge Winery in Eugene, the wine is described as an expressive rosé with lots of aromatics and red strawberry, raspberry and floral elements.

A chardonnay in May (which is Oregon Wine Month), made at Willamette Valley Vineyards with notes of lush, tropical fruit and a spicy, roasted element.

And a pinot noir in August, made at Silvan Ridge Winery and King Estate Winery. With the grapes being from a warm year, the wine is expected to be bold, with ripe flavors of cherry, spice and darker fruit. 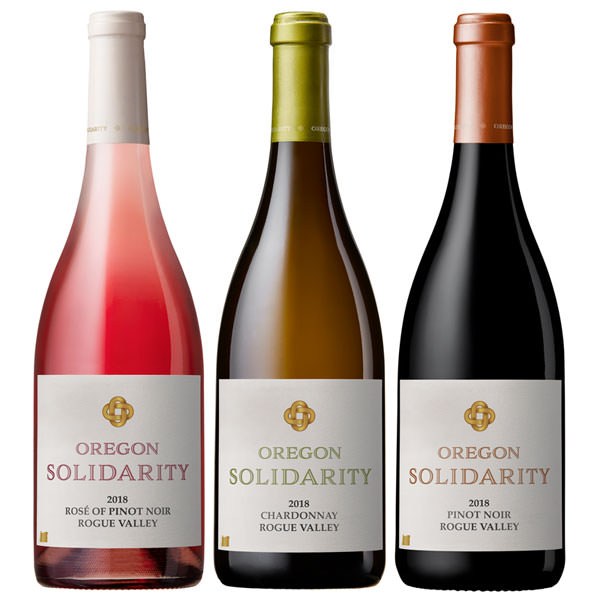