The Strawberry Mountain Wilderness is an unassuming, seemingly overlooked collection of rugged peaks and sharp ridges, glacier-carved basins, alpine lakes, and spring-fed wildflower meadows in Eastern Oregon. In August, the lakes are swimmable and abundant huckleberries beckon from alongside the trail.

On this occasion, however, we chose to visit the Strawberries during early fall, witnessing the first wintry precipitation at the base of the mountain and wildflowers clinging to their last remaining petals, seeming to huddle together in stoic resistance to the changing season. 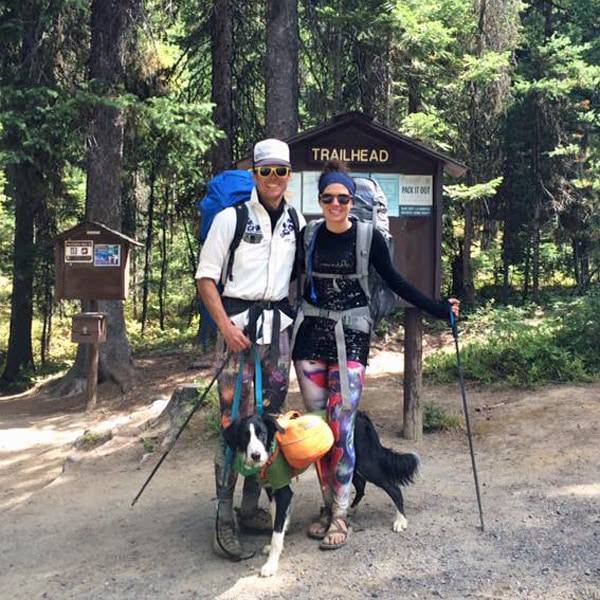 We began our adventure on a mild, sunny afternoon at Strawberry Basin Trailhead.

Instead of counting ounces and opting for light and fast, we chose to carry heavy packs filled with unnecessary items of luxury: a box of wine, battery-operated Christmas lights, books, a small bottle of whiskey, about eight pounds worth of too many snacks, a hammock and outfits that spoke of style more than practicality. 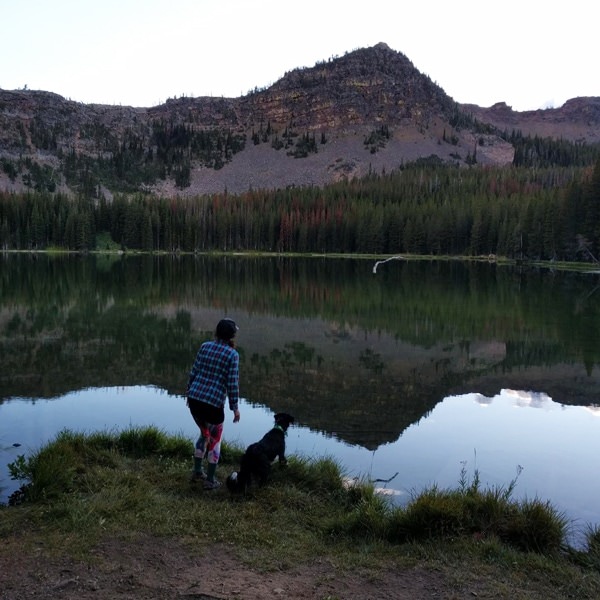 It’s safe to say we were here to explore, to savor each moment and to celebrate the freedom of the wilderness.

We set off with our dog Riggins late in the afternoon toward Slide Lake. The trail turned south, traversing the eastern side of the ridge and offering views of aptly named Slide Mountain, with numerous avalanche paths leaving scars down its face. Above, basalt columns stood in various states of toppling into each other. 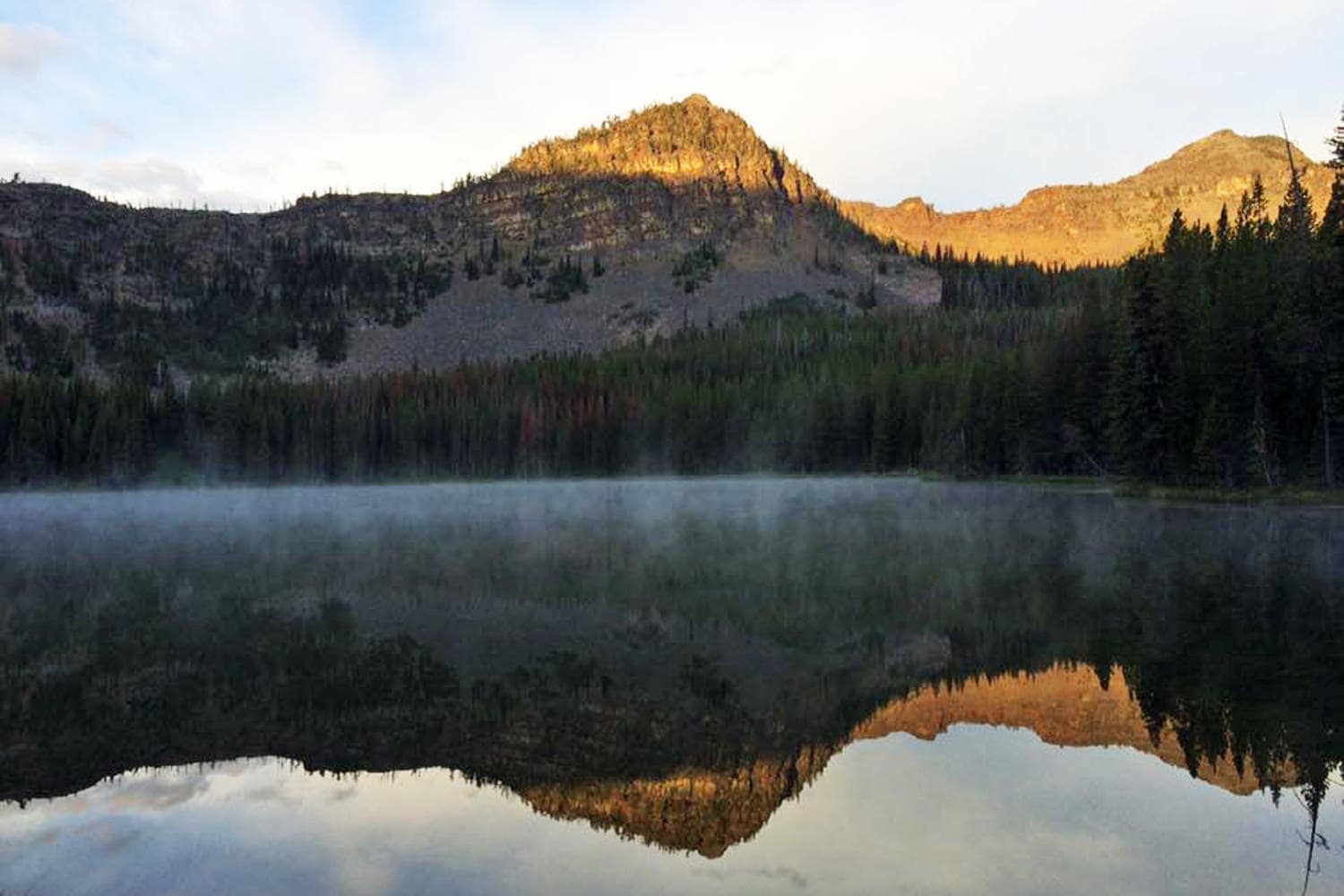 The sound of rushing water reached our ears before Slide Falls came into view, soon followed by a trail dropping down toward a closer look. The forest grew thicker before opening up to Slide Lake, where we camped for the night. We positioned ourselves on the northern end of the lake, angled so that the morning’s sunrise hitting the rock wall opposite the lake would be in full view from our camp. We strung up our lights and hammock, opened the wine and cooked dinner, threw sticks in the lake for Riggins and read by headlamp, sharing a dessert of dark chocolate. The evening wasn’t too cold, so we abandoned the tent and slept near the water, watching the stars until sleep enveloped us.

I woke to fog drifting across the lake and the first hint of sunlight turning the top of the rock wall orange-red. I dozed in and out, waking each time to a more colorful display on the rocks until my excitement overcame my drowsiness and I crawled out of my sleeping bag to find the coffee supplies. We enjoyed a slow morning, drinking coffee and reading in the hammock, making breakfast and packing up our explosion of gear. Setting off, we continued around the lake and up over the next ridge toward High Lake. In those first few miles, we saw two other parties – the only people we would see again until we reached Strawberry Lake on our third day. It felt like we had the place to ourselves. 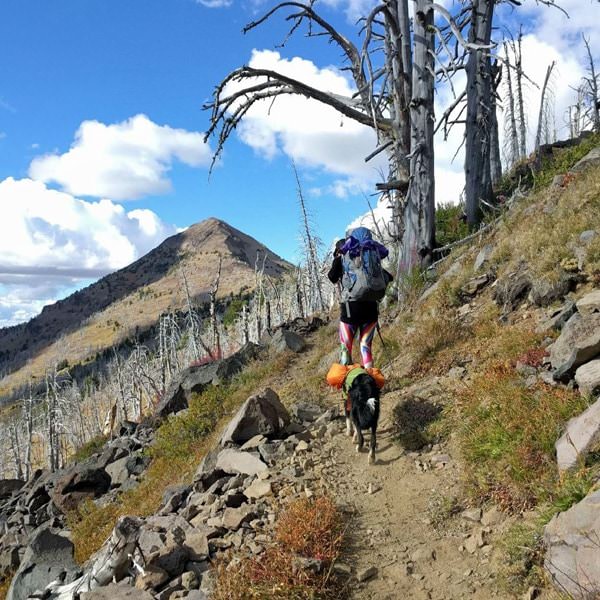 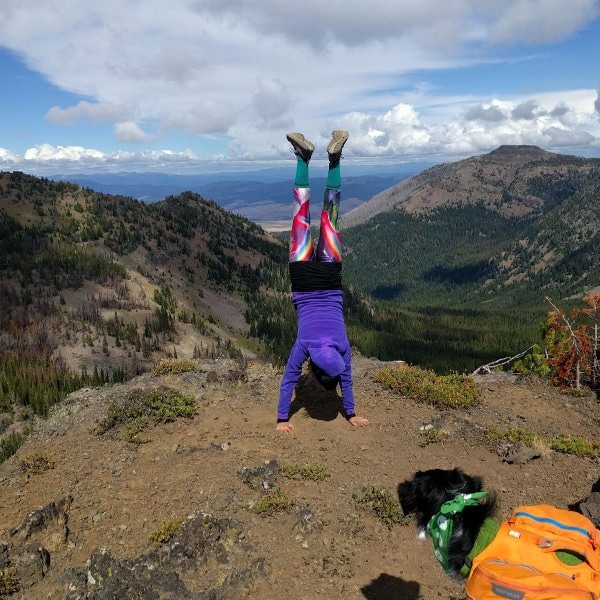 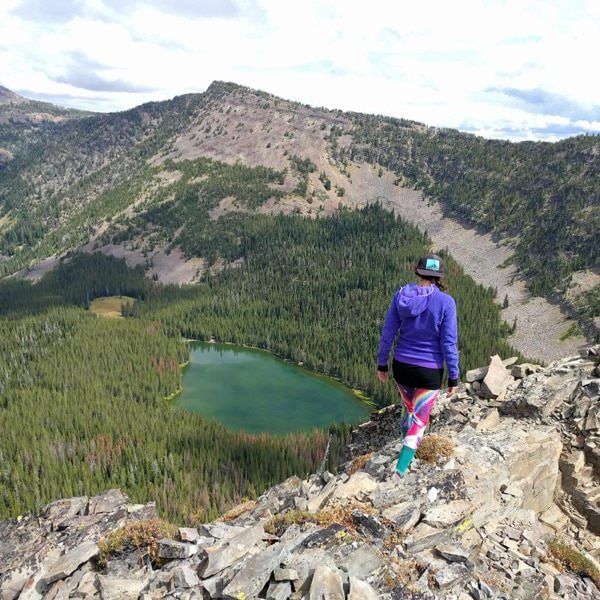 Atop the ridge, we spotted a nearby peak with an easy rock scramble to the top and decided to drop our packs and go check it out. We each picked a different route up to the top, where we took in a view of the basins around us. Directly below and to our north were Slide Lake and Little Slide Lake, as well as Slide Mountain. To our southeast was a basin containing Mud Lake and a forest that had thoroughly burned. Among the rocks, we discovered fur and scat of either bighorn sheep or mountain goats.

Blustery wind and fast-moving clouds made it feel more like fall, and cloudbursts hung from dark clouds to our north, east and south. We wondered aloud whether one of those storms would drift our way and decided to keep moving. 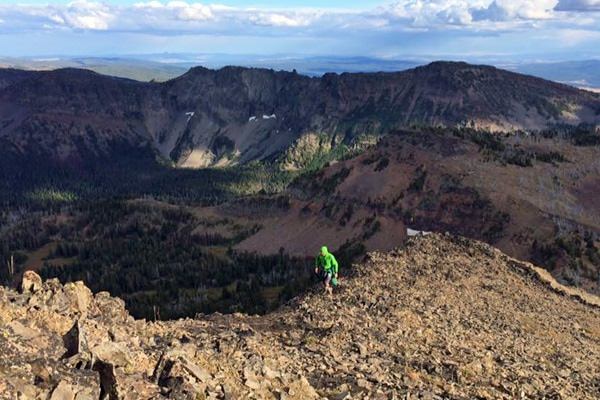 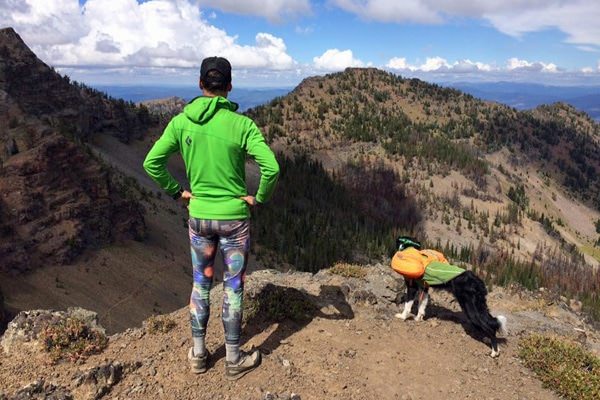 A short ascent took us to the top of the adjacent ridge, where we dropped our packs once again to peer over a nearby cliff before descending through burned forest to High Lake. This small alpine lake is perfect for taking a dip on warmer days, and it has a few spots for camping near the water. Cliffs rise opposite the lake, topped by Rabbit Ears, two rock towers connected at the base. A quick stop for water became a European-style picnic, complete with a cup of wine, salami and cheese and a short siesta. I slightly regretted the wine as the sun emerged and baked us during the climb back up from the lake.

We gained the next ridge and with it, a refreshing breeze. The trail temporarily ends here at a forest road, which we followed to an old road that eventually becomes a trail. Continuing up the old road toward Strawberry Mountain, we watched dark clouds tumbling in from the west, obscuring the summit before moving eastward. I felt excitement and anticipation as I imagined being up there in the mountain elements. We stashed our packs at the base of Strawberry Mountain in order to quickly hike up to the top in between the waves of clouds.

As we dug out layers and snacks, I noticed white stuff falling from the nearest cloud and started whooping and dancing. Snow!, we thought. It was actually graupel, a soft form of hail, but we decided it counted as the first snow of the year.

The precipitation moved on, and we made our way up to the peak’s summit, where we lucked out with a break in the clouds and a full 360-degree view of the peaks, basins and valleys thousands of feet below. 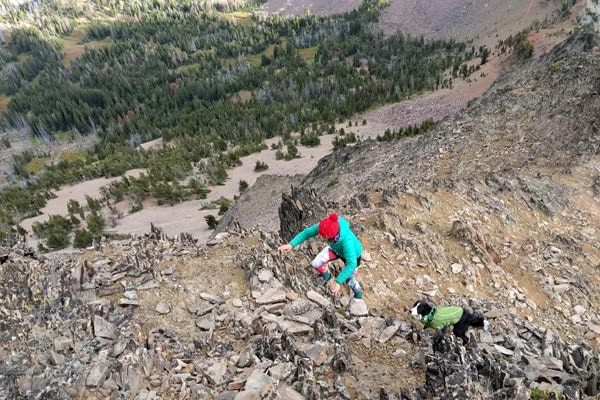 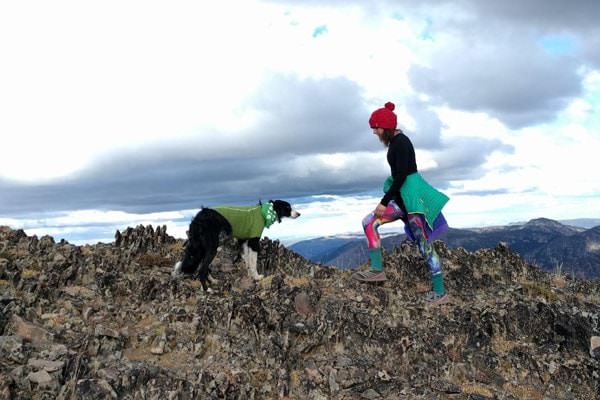 Daylight waned as we skipped and ran back down to our packs. We decided to camp in one of the spring-fed meadows just below Strawberry Ridge, at about 8,000’. The second night at higher elevation was much colder, and all three of us slept in the tent, with Riggins sharing my sleeping bag.

In the morning, we woke to our camp covered in frost and watched Strawberry Mountain light up with alpenglow. We warmed up sipping mugs of hot coffee and throwing sticks for Riggins in the sunlight-bathed meadow. 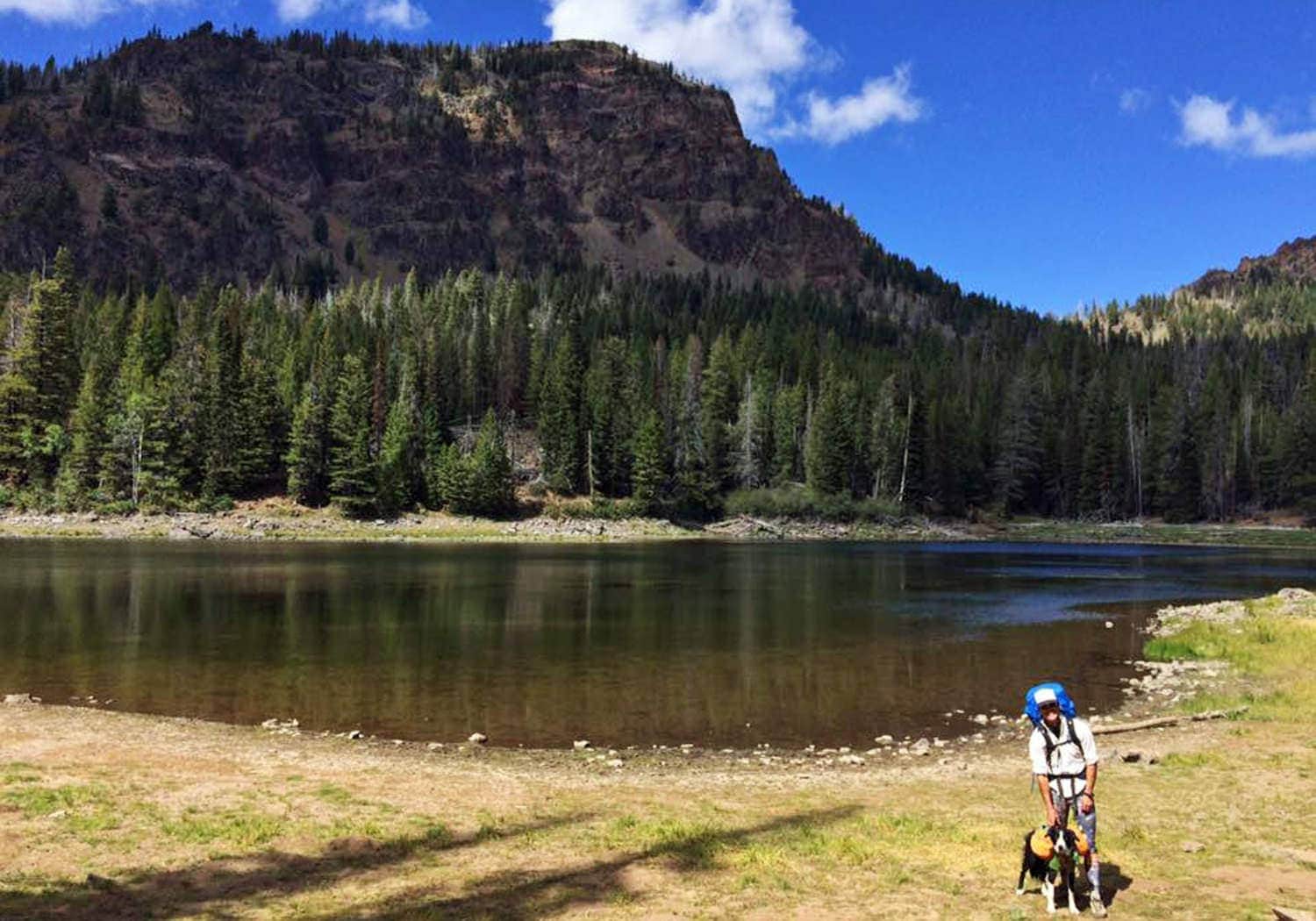 Packing up, we made our way about 1700’ down to Strawberry Lake, stopping along the way to examine wildflowers, point out potential ski lines or rock climbing routes and to explore Strawberry Falls. We began encountering other folks, mostly day hikers, as we neared the lake. On the shore of the lake, we sat down to take in the view and eat lunch before hiking the last mile or two back to the trailhead.

As we drove away, toward civilization and home, I couldn’t help feeling giddy about the beauty and wildness of the Strawberries, about their rejuvenating effects on my body and spirit, about the changing season and about future adventures that had sparked my imagination simply by spending a few days in this untamed land.

Allison Hartz
Allison Hartz feels at home with dirt between her toes, snowflakes in her eyes and sweat dripping off her chin. She tests her limits while exploring Oregon's wild and beautiful secrets, taking on crumbly volcanic peaks, remote trails and less-traveled ski lines.
Is any of the information on this page incorrect? Suggest an update
Ready to hit the road? Bring our travel magazine along.