It’s surely Oregon’s most photographed rock. It’s low tide and I can walk right up to the base of Haystack Rock on the edge of the shoreline in Cannon Beach. Overhead is the chatter of nesting seabirds. I watch as colorful tufted puffins awkwardly launch themselves off the towering 235 foot monolith, then return a few minutes later bearing a beak full of fish for their chicks tucked away in burrows in the grassy covering. At the base of the rock, I can see clusters of multicolored sea stars and peering into the pools left by the receding tide discover dozens of strange and fascinating creatures. 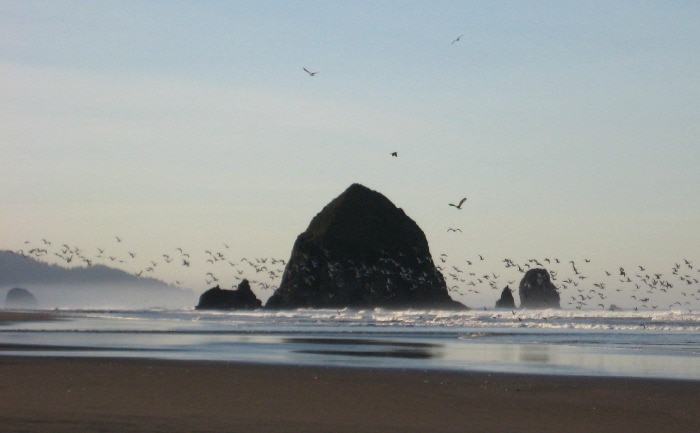 This is not a scene exclusive to this part of the North Oregon Coast. There are nearly 2000 of these small islands and rocks along the coastline and they are truly magical areas. These picturesque sea stacks and small islands are a visual delight for sightseers and photographers, but they are also fascinating natural environments. All are part of the Oregon Islands National Wildlife Refuge and some of the most remarkable displays of nature occur here, often unnoticed by the casual beachgoer. They teem with life in the tide pools, provide critical habitat for many species of birds and challenge visitors to ponder their geologic origins.

These sea stacks and small islands provide nesting grounds for seabirds that spend most of their year on the open waters of the ocean, swimming and diving for food. Tufted Puffins burrow into the grassy coverings to nest and Common Murres congregate in huge colonies, sometimes numbering in the tens of thousands, often covering the entire surface of bare rock where they balance their lone egg. Rocky ledges become nesting spots for cormorants, Pigeon Guillemots and gulls.

As I walk carefully around the tide pools, I’m suddenly surrounded by a cacophony of squawking as gulls as seabirds in unison take flight from the rock and circle overhead. A moment later, I see the reason for the commotion as two Bald Eagles soar around the rock. Bald Eagles and Peregrine Falcons often frequent these nesting areas in search of an easy meal.

At sea level, these rock formations in the intertidal zone are covered with unique creatures that have adapted to survive in this turbulent environment, most of the time under the water, but often left high and dry for hours. Barnacles, snails, limpets and mussels can completely blanket the rocks and colorful sea stars creep in to pry open a fresh mussel dinner. Green anemones lay open in pools left by the receding tide, often contrasting with pink encrusting coral or boldly colored sponge, like a science fiction garden in bloom. As I move above the pools, I see small crabs creep into the shadows and sculpin fish dart for cover. If you look closely into the pools, you may spot sea slugs, known as nudibranchs, which come in a variety of shocking colors and shapes.

The Oregon Coast’s sea stacks and islands were formed by millions of years old lava flows originating from present day Eastern Oregon and Washington. The flows cooled into solid basalt and millions of years of erosion have resulted in the natural wonders we see today.

Not all of the rock formations are accessible. Some lie offshore, providing subject for photographers and more isolated habitat for birds, seals and sea lions. The Oregon Coast’s major rock formations begin in the Cannon Beach area and stretch south to the California border near Brookings.

In addition to the Cannon Beach area, visitors can get up close and personal with these natural wonders at easily accessible locations including Proposal Rock in Neskowin, Seal Rock State Recreation Site, the beach at Bandon, Battle Rock at Port Orford and Harris Beach State Park in Brookings.

All of Oregon’s sea stack and islands are federally protected natural areas and visitors should avoid encroaching on seabird nesting areas. There is no climbing permitted. Tread lightly and avoid disturbing the amazing creatures as you observe these remarkable natural areas.

Gary Hayes
Gary Hayes is publisher of Coast Explorer Magazine and founder of Explorer Media Group, a travel media and marketing company based in Seaside. Gary is a native Oregonian whose earliest memories include working on his grandfather’s fishing boat on the Oregon Coast. Now living in Cannon Beach, Gary is an extensively published photographer and writer focusing on the Oregon Coast and the Northwest's food and wine culture. He also serves as Executive Director of the SavorNW Wine Awards.
Is any of the information on this page incorrect? Suggest an update
Ready to hit the road? Bring our travel magazine along.