Snow crunched beneath my boots as I kicked steps high on the slopes of South Sister. The wind whispered and the only other sound on that sunny June day was the quiet breathing of my brother.

I followed 10 feet behind, letting my younger sibling do the hard work with his crampons. Our friend trailed us both. The ground wasn’t unduly steep, but we were cautious considering it was still early in the season. We had the mountain to ourselves.

When we crested the crater rim, my brother turned around and grinned. Below us to the south lay snowfields, lava flows and lakes. It was a vision, with the setting sun casting an increasingly orange glow on the white flanks of the mountain. We were on the summit 15 minutes later, tapping the U.S. Geological Survey marker with our trekking poles. We hugged and simply stared north. Middle and North Sister stood guard, daring us with their closeness. Spread out to the north was Oregon, defined in a panorama.

In the five years since that first summit experience, I’ve chased that feeling of wonder. I’ve climbed Oregon’s third-tallest mountain three more times, swam in lakes on hot summer days in different parts of the Three Sisters Wilderness and hiked to other viewpoints to gain new perspectives on the area. The region is a familiar friend I need in my life. For the price of a couple hour’s drive from my home in Eugene I can get out into a mountainous region and ignore my cell phone.

Our wild places, though, are rarely well-kept secrets. The Three Sisters Wilderness is an easily accessible wonderland of mountains, lakes and forests. With multiple entry points from every direction, all you need is a full tank of gas and you can get to locations where you’ll see six mountains, enormous lava flows and an observatory made out of lava rock. The Three Sisters offer something for everyone, which creates this increasingly common occurrence for hikers: You are simultaneously alone in nature and surrounded by people.

Don’t let hoards of weekenders deter you from creating your own Three Sisters experience, though. I selfishly guard my moments in the area but realize these places are for everyone. Author and longtime (Eugene) Register-Guard columnist Bob Welch described a scene of North Sister from his hike of the Oregon section of the Pacific Crest Trail as a “panorama so rare and pure that I sensed it somehow changed me for the better for my having occupied it for only a moment.” To me that’s what we are all searching for in the mountains. We’re trying to be better people, and views as captivating as the ones in the Three Sisters area surely help.

Despite the grand, sweeping vista from the top of 10,358-foot South Sister, my favorite memory in the Three Sisters happened when the clouds closed in around me, soaking me with mist and numbing my hands. I’ve read accounts of climbers being inside a ping-pong ball, the gray clouds forming a depth-perception killing shroud, but it wasn’t until my brother, uncle and I were trudging up the final 1,000 feet to the summit of South Sister that we experienced it first-hand. We started our hike from a campsite near Moraine Lake at the base of the mountain in sunshine, but the upper reaches of the mountain were cloaked in clouds. We had the essentials to climb in inclement weather so we persisted. Hours later, as the wind whipped around us, we topped out, barely pausing to take a hurried photo.

I’ll look at the photo sometimes, taken by another hardy soul who climbed with the knowledge there wouldn’t be the same view from the summit. My uncle’s grin is infectious. We had drifted apart over the decades, the byproduct of him living in Spokane and my brother and I in Oregon. That fall, though, we reconnected at my grandfather’s funeral. We made a pact to climb a mountain that summer, and eight months later we suffered and enjoyed every foot of that slog. Grandpa Ruben brought us together again, and that weekend will be one I think about for the rest of my life.

The view from the saddle at the terminus of Lewis Glacier looking south. You can see a big lava flow to the right, Morraine Lake in the middle of the photo, Sparks Lake, Hosmer Lake, Lava Lake and Mount Bachelor.

The allure of South Sister is its summit is seemingly in reach of anyone. Oregon-native and author Jon Krakauer wrote in an essay that South Sister “…demanded nothing more in the way of technical skill than energetic walking, and was in fact ascended by hundreds of farmers, house pets, and small children every summer.”

Krakauer isn’t wrong. You don’t have to be in terrific cardiovascular health to summit, but the relative accessibility of the mountain draws those who tend to be ill-prepared. You don’t need to go out and purchase a bevy of brand-new gear from REI, but the realities of walking up a 10,300-foot mountain should be considered.

At the least a first-time climber should have all of the 10 hiking essentials as well as an accurate weather forecast because the difference between the 5,500-foot elevation at the trailhead and the summit can make it seem like you’re on a different planet. 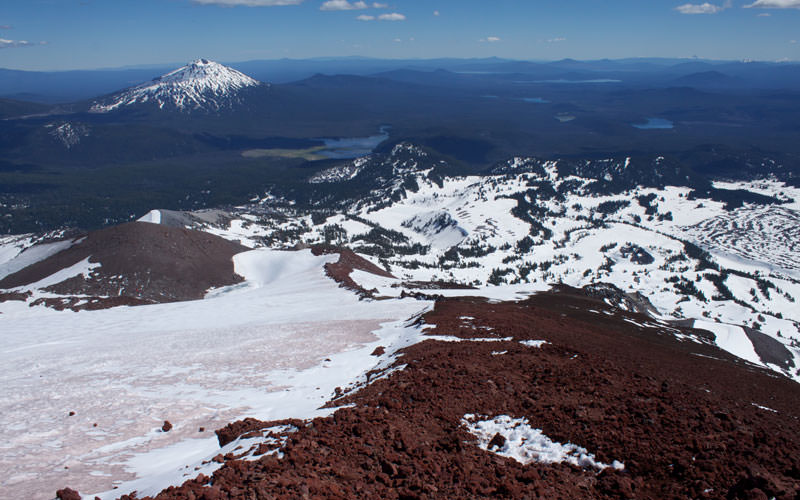 A day hiker makes her way down the lava rock ridge as the clouds roll in on South Sister. The first half of the hike to the summit is through steep forest terrain and a wide-open plateau. But the final miles of the hike turn rugged as climbers pass glaciers on a lava rock ridge. Hikers usually take a break at the saddle that forms at the bottom of the Lewis Glacier. Late in the season once the snow melts there’s a reservoir of water people call “Tear Drop Lake,” but for most of the year the crater can easily be traversed in 15 minutes en route to the actual summit.

The 11.6-mile round-trip from the main climber’s trail at Devils Lake gains and then loses 5,000 feet of elevation. After a relatively easy 2-mile warmup through a hemlock, fir and ponderosa pine forest you break free onto a pumice plateau where Mount Bachelor and Broken Top greet you. The main challenge is ahead, with the massive bulk of South Sister looming to the north. Yes, you’re climbing all of that. No, what you see at the top isn’t the summit.

The final 3 miles to the summit is a stair-stepper on loose lava rock hikers universally curse. Hardly a foot is gained vertically where your boots don’t slide. If you can find solace and positivity in the slog, though, you can persevere to the summit. Trust me, the view from the top is worth it.

The magic of the Three Sisters area lies in the varying ways visitors can experience it. Slogging up the dusty path of South Sister is one. So is the view from Lava Lake at 5:30 in the morning when the fog hugs the water and osprey circle above, looking for their breakfast. Another is the view from McKenzie Pass in the midst of 65 square-miles of black lava rock or the 66 miles of the Cascade Lakes Scenic Byway that snake through its basin. The 281,190 acres of wilderness blesses us with 260 miles of trails, the start of the Deschutes River and also holds the largest glacier in the state, the Collier, on the slopes of North Sister.

And that’s just what you can see during the day. Stay for a sunset and stargazing and it transforms yet again. The night before my uncle, brother and I trudged our way up through the ping-pong ball to a summit without a view, I stayed up well past midnight to photograph the night sky. The clouds had yet to make an appearance, and an almost full moon brightened our surroundings in the magical way only moonlight can. Standing above Moraine Lake I stared at the illuminated slopes of Broken Top and Mount Bachelor. I could see for miles.

After a few attempts at capturing the stars, I put down my camera and just soaked it in. The wind was quiet, the world at peace. I reveled in it, not wanting to fall asleep for fear I would miss something. I wanted to live in that point in time forever, but the fact that moments are fleeting is exactly why they’re special. If they lasted forever we would take them all for granted, and that’s something we should never do with such a special place. 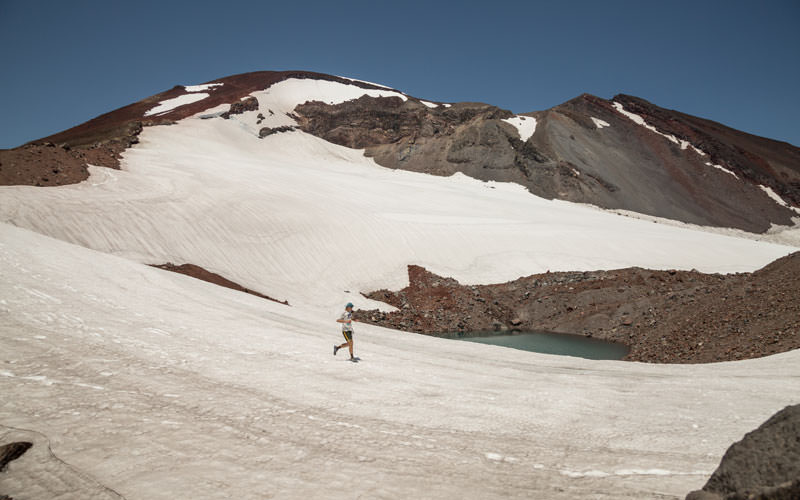 Ben Schorzman
Ben Schorzman is the content coordinator for the City of Eugene’s Library, Recreation and Cultural Services department. A native Oregonian from Vernonia who grew up in the woods, Ben never leaves home without his trusty Canon DSLR and he’s a firm believer in the post-hike beer at the nearest craft brewery.

What are the must-do trails south of Bend?

Definitely check out the Green Lakes Trail on Cascade Lakes Scenic Byway. It’s popular, but for a good reason — it’s a very scenic and a great trail. The more ambitious climb would be South Sister, an accessible but challenging hike. In Newberry, don’t miss the Obsidian Trail. There’s also a short hike to the Paulina…

Kim Cooper Findling
Central Oregon Expert
Is any of the information on this page incorrect? Suggest an update
Ready to hit the road? Bring our travel magazine along.