An Eye-Opening Hike to Cascade Head

A mom and her girls learn about a delicate coastal habitat.
Danielle Centoni,  Author
Advertisements

My kids are antsy this morning. My 10-year-old daughter eyes the little packets of jam on the table like a bear that’s just spotted honey. Meanwhile, her 14-year-old sister has stolen my phone to take a picture of the cute handmade ceramic creamer emblazoned with “Otis Cafe” for an Instagram account she doesn’t even have.

I brace for the onslaught of pleas, but just in time the server sets down our plates, heavy with fluffy sourdough pancakes, bacon, hash browns, scrambled eggs and sweet molasses bread. You’d think we were fueling up to hike the Pacific Crest Trail, not a 2-mile, mostly flat jaunt to the tip of Cascade Head and back. But when in Otis, you eat at the Otis Cafe — and you eat big.

We have a family habit of hiking to water — waterfalls, lakes, creeks. It gives the kids an easy-to-spot goal so we don’t have to hear “Are we there yet?” when we’re trying to commune with nature. This time, though, the water we seek is the mighty Pacific, seen from 1,300 feet above, on the top of Cascade Head. But that’s not our only goal. 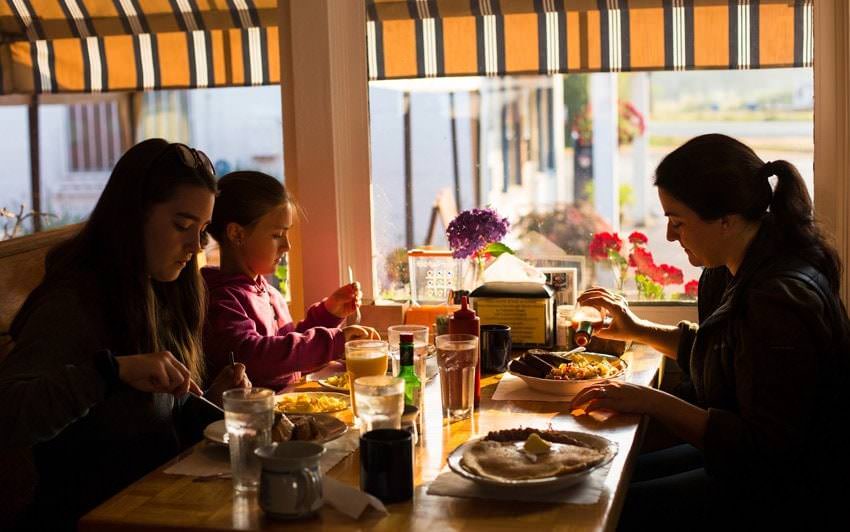 This area with the stellar views is also a preserve for the endangered silverspot butterfly, and it seemed like the perfect opportunity to teach the kids something more than just a general appreciation of nature. I want my kids to see not only the beauty that surrounds them in Oregon but also its fragility, so they can be better stewards of the earth.

Thankfully, I had some help in this endeavor, as the hike was guided by ecologist Debbie Pickering, The Nature Conservancy’s lead caretaker of the preserve. For more than 30 years, Pickering has led the Conservancy’s efforts in restoring the unique habitat of the butterfly to “allow this rare native species to persist,” she says.

You’d think we were fueling up to hike the Pacific Crest Trail, not a 2-mile, mostly flat jaunt to the tip of Cascade Head and back. But when in Otis, you eat at the Otis Cafe — and you eat big.

Pickering asked us to meet her at the upper trailhead, just a few miles off Highway 101 from Otis Cafe. The flat trail is definitely more kid-friendly than the more popular lower trailhead, which offers a steep, rewarding climb to the top. But the lower trail also relies on a network of easements on private property to remain open, and she worries that continued overuse puts those easements — and the trail — in jeopardy, as property owners and neighbors get fed up with insensitive visitors.

As we gather our water bottles and tie our shoes, she warns, “The headland makes its own weather. It can be very cold and windy, especially in the afternoon as the hot air rises and brings up the marine air with it.” So we stuff jackets into my daypack before setting off, only to stop a few feet in.

“Ew! What’s that?!” exclaims my youngest, pointing to a slithering, yellow-spotted black bug on the ground.

“That’s a harpaphe millipede,” says Pickering, stooping to pick it up and give us a closer look. “They help break down decaying material. And they release hydrogen cyanide as a defense mechanism, which is why they can smell like almonds.” We all take a close whiff of the millipede nestled in her hands, which has now risen in our esteem from a creepy bug to a forest hero. If only I could take an ecologist on every hike. 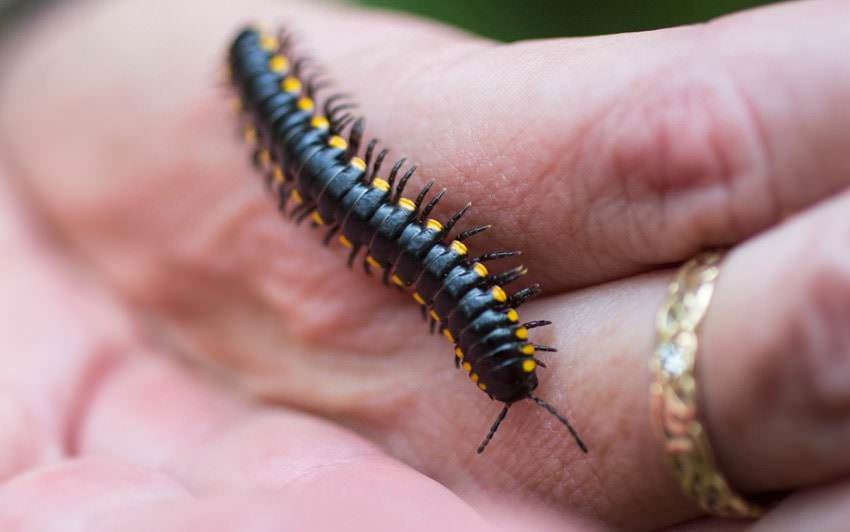 As we amble through the shady forest (considered a temperate rain forest, we find out), Pickering teaches us the differences between the Sitka spruce (scaly bark and bottle-brush needles) and Western hemlock (flat, short needles and tiny cones). We get to know the monkey flower, foamflower and candy flower, as well as salmonberries, thimbleberries, huckleberries and red elderberries.

Before long we reach a tall wood archway over the trail. Had we been alone, I might have noticed it and blithely wondered. I might have noticed things looked different on the other side — maybe. But since we’re on a guided hike, we got an eye-opening tale of forest succession. The arch, erected by the Conservancy, marks the line between the mature forest we had just been walking through, and a younger version of itself.

We all take a close whiff of the millipede nestled in her hands, which has now risen in our esteem from a creepy bug to a forest hero. If only I could take an ecologist on every hike.

The trail is actually an old logging road, and we are about to enter an area that was clear-cut in the 1960s. In the 50 years since, it’s been going through succession, with deciduous trees like alders, which thrive in the sun, taking over after the conifers were hauled away. Considered a pioneer species, they improve the soil and provide shade as they complete their relatively short life cycle, dying off just in time for the Western hemlock and spruce to take their place. We could already see saplings of those conifers taking hold, and we could see what the mature forest would eventually look like by simply turning our heads to the right.

We keep walking and soon reach a sign that marks the official entry to the preserve. No pets are allowed, not only to keep trampling to a minimum but also because their scent disrupts the wildlife. After a few steps, we emerge from the shade of the forest into the sunny grassland that spreads like a tan sea to the top of the headland, where the sapphire-blue ocean roils below. The views are truly as stunning as they say, reaching down along the rocky coast and east across the Salmon River Estuary.

Pickering begins to peel back the layers of all this beauty. This was once, decades ago, prime cattle country. She points out that among the golden grasses we’re standing in, most are invasive species. Seeds from the hay used to feed the cattle found hospitable ground here, and now the grasses outcompete the native blue violet, which are a required food source for silverspots’ caterpillars. As the violets decline, so do the butterflies. Through targeted burns, the conservancy works to keep the invasive plants at bay, but it’s a constant battle. 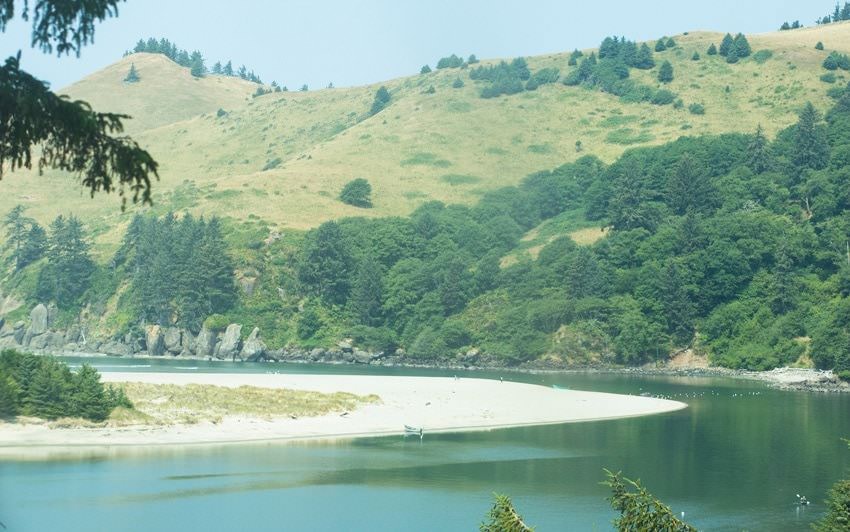 But then she points out the network of streams forming the estuary below. This critical habitat for wild salmon was once clogged by a series of dykes and the water used for pastures. Restoration by the Forest Service started in the 1970s, and research shows 25 percent of returning salmon have spent considerable time in this “nursery” as they grow strong on the plentiful bugs and make the transition to life in salt water.

Like the adolescent forest we’ve walked through, the estuary (and hopefully Cascade Head itself) is yet another example of nature’s incredible resiliency — when we humans can be prevailed upon to protect it.

As we make our way back, I tell Pickering I feel like my eyes have been opened. What would have been just another pretty hike is now rich with meaning. “It’s kind of a curse, though,” she replies. “It’s hard for me to enjoy it up here anymore.” I get it. Ignorance is indeed bliss. But on the flip side, knowledge is power — and that’s the one lesson from this hike I hope my kids remember, long after we make our way back home.

But then she points out the network of streams forming the estuary below. This critical habitat for wild salmon was once clogged by a series of dykes and the water used for pastures.

More Inspiring Hikes
If you want more eye-opening and kid-friendly hiking opportunities, The Nature Conservancy in Oregon offers guided hikes and leads volunteer work parties at many other preserves around the state, including the Zumwalt Prairie in Eastern Oregon and the Tom McCall Preserve in the Columbia Gorge.

Danielle Centoni
Danielle Centoni is a food and travel writer, editor and the author of numerous cookbooks. She has worked on staff for the Oakland Tribune, The Oregonian, Imbibe Magazine, MIX Magazine, and Eater Portland, where her work earned a James Beard Journalism Award in 2016. Her recipes and articles have also appeared in Better Homes and Gardens, Rachael Ray Everyday, and EatingWell, among others. Her latest cookbook, "Fried Rice: 50 Ways to Stir Up the World’s Favorite Grain," was published in August 2019.

Cascade Head
Hebo, Oregon Coast
Otis Cafe
Otis, Oregon Coast
Is any of the information on this page incorrect? Suggest an update
Ready to hit the road? Bring our travel magazine along.