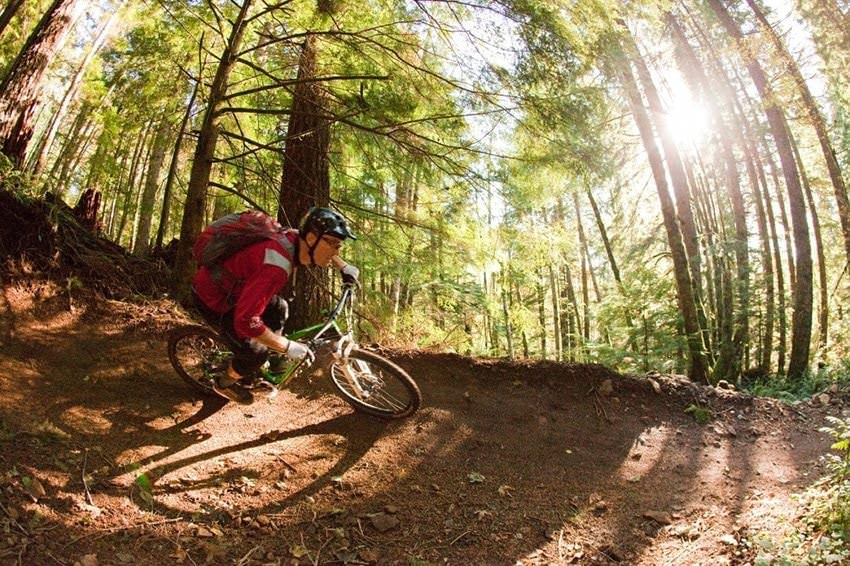 Oregon is well-known and well-loved for its mountain biking bounty — with forests, mountains and valleys that form magnificent backdrops for some of the best trails in the world.

But for Chris Bernhardt, that’s not quite enough.

“We have lots of high-quality destinations, but many of them require a half-day effort to get to,” he says. “We need trails closer to where people are.”

As a director of field programs with the International Mountain Bicycling Association, Bernhardt is part of a team that dreams up, designs and builds trail systems across the world — including right here in Oregon.

He was part of the crew responsible for designing and building the extremely successful Sandy Ridge Trail System near Mt. Hood, and was instrumental in the 2015 opening of the Mountain of the Rogue trail system just off I-5 in Rogue River.

From 2004 to 2006, Bernhardt and his wife traveled around the Midwest and the East Coast promoting bike advocacy and trail stewardship as part of IMBA’s Trail Care Crew.

“I’ve seen amazing places and been welcomed by mountain biking communities across the country. It was an awesome experience,” Bernhardt says. “But I’ve been riding since the early ‘90s, and I’ve learned that the best trails are in the Pacific Northwest. There was no question we’d settle back down in Oregon when we were done.”

For Bernhardt, mountain biking is about getting outside and building camaraderie with other riders. To him, people and nature go hand in hand — and that’s a value he’s built his career on.

“Public lands are there for the public. That doesn’t mean you can do whatever you want on public lands, but it means we should encourage people to play outside. If people aren’t connected to the outdoors, they’re not inclined to protect the outdoors,” Bernhardt says.

Part of getting people outside is making fun things to do — such as mountain biking — accessible. The Mountain of the Rogue trail system is located just a few minutes off I-5, between Grants Pass and Medford. “We have amazing opportunities working with the Bureau of Land Management in Oregon to take advantage of developing trails closer to where people live,” Bernhardt says.

The Mountain of the Rogue system, like other IMBA riding areas, was designed around natural elements in the surrounding landscape, from trees and flowers to hills and rivers. Bernhardt hopes the riding area is equally appealing to locals and visitors, giving everyone a chance to do something they love outside.

“I got to ride at Sandy Ridge as a secret shopper, and I heard these riders who had no idea who I was, talking about how great it is,” he says. “That gives me the most satisfaction — that they’re doing something they really enjoy. It’s important to me to get people outside, so they’ll appreciate and want to preserve the great outdoors.”

Want to Find Out More?

What are the best mountain bike areas in Oregon?

Kristen Mohror
Is any of the information on this page incorrect? Suggest an update
Ready to hit the road? Bring our travel magazine along.