A beautiful and remote 52-mile route with more than 4,000 feet of climbing.

As a tourist in a car, Oregon is a wonderfully scenic place. From the comfort of the highway, there are plenty of oohs and aahs. But as a gravel grinder on a bike, you get to take it to the next level. This route showcases both ends of the spectrum, with a highway that’s part of a Scenic Bikeway, followed by some gravel fun that’s a part of the state few ever see.

This is a formidable 52-mile route; it includes two demanding climbs and a total gain of more than 4,000 feet. And at these elevations, you might encounter remnants of snow even into mid-June.

The ride starts in the postcard-pretty town of Prairie City, where you don’t know whether to take a photo of the Old West storefronts, the pristine church, or the snow-capped mountains on the opposite horizon. Of course you should get them all. Staying at the historic Hotel Prairie and eating at a local establishment is part of the comprehensive experience of this route.

As you head out of town on quiet Summit Prairie Road, you’re pedaling toward the Strawberry Mountains that pierce the sky to the south; the road rises gently until you turn off onto the Forest Service road, where things get a bit more wild, unpaved and vertical.

The rough-gravel grind to Grouse Knob is by far the biggest challenge of the route. Get a feel for the surface, steep yourself in the serenity of the surrounding forest, and settle into a rhythm; it’s going to be a while – like, oh, 15 miles of steady climbing, not including the false summit at about Mile 20. As you approach Grouse Knob you’ll be rewarded for your effort with more fantastic views of the Strawberry Mountains.

After you crest the top, you’ll revel in the extended fun of losing those 15 miles of climbing in only 10 of descending. Don’t take your eyes off the road, and yet somehow keep them open for the flora and fauna you’re gliding by in the forest. It’s downhill all the way to Highway 26.

You’ll find one of the few signs of civilization on this route at Austin Junction – the Austin House, where you can fuel up on food and drink and hang with some locals.

Now you’re on the pavement for the rest of the ride – but that doesn’t mean it’s going to get a;; that much easier, or certainly any less scenic. The paved rise to Dixie Summit is the second-hardest climb on this route, and yet it’s considered one of the most difficult on the 174-mile Old West Scenic Bikeway. Feel fortunate that you’re scaling it on the gradual side, because when you hit the top it’s a screaming-good bomb down the other side.

As you ride this giant roller-coaster, you’ll gradually be aware that the terrain has changed back from forest to prairie and rangeland. The sounds of birds, the scent of the fresh air – it has subtly changed as you drop back into Prairie City.

In addition to both rugged and paved roads, on this route you’ll rattle over cattle guards – and maybe encounter a cattle traffic jam in the rangeland portion of the ride. But that’s the only type of traffic you’re likely to find; you can travel blissful mile after mile, encountering no or few vehicles.

This remoteness means you’ll need to be self-sufficient and prepared. Also note that remote roads may vary from both paper maps and online sources. Camping opportunities include Bates State Park (via a short detour at Austin Junction), and dispersed camping is allowed along the gravel segments.

When you’ve finish this route, it’ll feel like you’ve covered way more ground than 52 miles. And you’ll have a deep, hard-won appreciation for the beauty and essence of Eastern Oregon that those tourist drivers will never know. 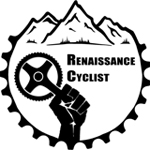 Renaissance Cycling
Your bicycle is a tool – a complex amalgamation of lines and spinning circles, and a means to achieve incredible adventure. The routes we promote focus on utilizing your bicycle to escape the drudgery of the everyday. We strive to capture journeys where every turn of the wheel tells a story. If you’re looking for well-manicured singletrack, roads with broad shoulders and no potholes, and out-of-the-box bicycling tied up with pretty ribbons and bows, our routes are not for you. Instead, these routes are off-the-beaten-path adventures – many need to be bikepacked, some require packrafts, and all are designed to test and inspire riders.
More rides by this ambassador on rideswithgps.com