In the Land of James Beard

Tracing the chef’s footsteps back to his beloved home state of Oregon.
JD Shadel,  Author

James Beard may very well have redefined the art of American food at a time when touting it was not particularly fashionable. But for generations of home cooks, his legacy resonates on a more personal level — a legacy I fortuitously followed to Oregon.

My childhood introduction to the “Dean of American Cookery,” as the New York Times dubbed Beard in 1954, was sort of like a kid getting to know a great-uncle who lived in a distant state and passed away before you could form memories about him — like a boy glancing at yellowed family photos, turning each one over to read where it was taken and who was in the picture.

I first encountered Beard’s name in the tomes I’d pull off a shelf in the kitchen, which held my mom’s sprawling collection of cookbooks. Beard’s name christened a few and was mentioned just enough in others for me to take notice. I would plop down encyclopedia-size volumes, which felt as if they weighed as much as I did. Perched on a barstool, I’d lean over the laminate countertop and thumb through the drip-stained pages. I’d flip past recipes written by icons such as Beard’s longtime friend Julia Child, searching instead for those in which I could pronounce all of the ingredients.

Beard would tell his contemporaries that he wasn’t a professional chef. And at 11 years old, I wasn’t either; the most accomplished I recall feeling is the moment I proudly pulled neatly knotted pretzels from the oven, which I had twisted with nearly no motherly oversight. Beard, of course, was much more than a mere “professional chef.” More than three decades after his death in 1985 at the age of 81, he remains the most looming figure in the culinary world, the prototype of the modern-day celebrity chef. He hosted the first cooking series on network television in 1946, penned hundreds of magazine and newspaper columns, and authored nearly two dozen pioneering cookbooks at a time when it was still rare for a man’s name to appear on such a cover. More fundamentally, he was foremost among a new wave of globe-trotting chefs and food writers — most notably three gay men, as John Birdsall points out in his Lucky Peach essay — who dished up American food in a way that most Americans hadn’t tasted before.

Perhaps best known for the culinary awards named in his honor, Beard has inspired legions of urbane cooks to see food as a form of delightful pleasure and entertainment. That view of gourmet cuisine entered the mainstream after the Second World War, and it stood in stark contrast to the largely corporate-dominated conventions of the time. It elevated chefs to the level of auteurs — those who might roam through verdant forests for truffles, meet fishers at the dock and source all manner of ingredients from nearby farmers. It is, in fact, an image of Beard’s Oregon.

Coming of Age in the Kitchen

I grew up some 2,500 miles away from Oregon, deep in the Appalachian Mountains, the descendant of German and Irish immigrants — poor East Coast farmers who till the hilly fields to this day. The gravitational center of my childhood was my great-grandmother’s kitchen, where my family would gather each Saturday around a table bedecked with casseroles made from back-of-the-box recipes and veggies smothered in Campbell’s cream-of-mushroom soup. The dishes my great-grandmother prepared merged what’s-in-season practicality with the industrialized norms of early 20th-century home economics. In that way — and I must emphasize in that way only — my great-grandmother was not special. She came of age in the era of American cuisine that Beard would disrupt.

No one in the 20th century did as much as Beard to reshape American dining culture. Even so, his legacy is not often linked to his home state, which, in his twice-revised memoir, “Delights and Prejudices,” he wrote had a lasting influence on his culinary aesthetic — and thereby the nation’s food scene at large.

Julia Child famously declared, “In the beginning there was Beard.” But before there was Beard, there was the Northwest city where his English mother ran the Gladstone, a successful boardinghouse in downtown Portland; Mary Elizabeth Beard was known to be a fastidious cook, demanding in her expectations of kitchen staff and discerning in her selection of locally grown, seasonal produce. Before there was Beard, there was Jue-Let, the family’s Chinese chef, whom Beard fondly remembered as a father figure and whose noodles he craved when he fell ill. And before there was Beard, there were the misty and craggy shores of the Oregon Coast, where he would spend summers as a child in the town of Gearhart. Beard’s career took off in New York City, but he would return to the Coast throughout his adult years, frequently teaching cooking classes in Seaside; he wrote in his memoir that “no place on Earth, with the exception of Paris, has done as much to influence my professional life.”

It was through Beard and a few other sources that my young mind began to form a hazy conception of the thickly forested Beaver State. As I entered my tween years in Appalachia, I began grappling with a certain macho culture that can make anyone who deviates from such gendered expectations feel like an unwanted weed to be stifled, like lamb’s-quarter sprung up in a row of spinach. Even as I was silent about that panging sense of isolation, my mom’s and great-grandmother’s kitchens were sizzling, steaming havens. I’ve never been a naturally gifted cook, but I loved reading cookbooks — discovering the backstories behind each recipe, poring over the composed images of elaborately set tables and of chefs posing with gleaming butcher knives. This is where Beard’s name would invariably pop up, where I’d read the recipes from his childhood in Oregon, where the outlines of the rocky coast would begin to take shape.

For the Sake of Pleasure

Many years later, when I relocated to Portland, Beard became more pertinent to my work, which found me reporting on the state’s nationally lauded food scene. The Portland I moved to — a West Coast hub for queer life and a city growing increasingly cosmopolitan — was not the same city Beard grew up in, where he was allegedly expelled from Reed College in 1923 for a relationship with another man. (Reed later righted that wrong, granting him an honorary degree in 1976.) But a few things have not changed much, such as the verdant fields still ringing the city and its chefs who continue to source locally, often as much a matter of convenience as a testament to the ways in which the Slow Food movement has transformed Oregon’s kitchens. Today the state seems even more food obsessed — and that’s due in large part to Beard’s lingering influence.

While rereading a secondhand copy of “Delights and Prejudices,” which I’d picked up at Powell’s City of Books, I began viewing Oregon’s bounty through the lens of Beard’s formative years: strolling Portland farmers markets, imagining Beard’s mother roaming similarly clamoring markets for dinner ingredients; spreading out cheese, charcuterie and craft beer for picnics in Laurelhurst Park, a mode of dining in summertime Oregon that Beard said enhanced the flavor of a meal; and day-tripping to the Coast’s upper-north corner, which Beard so fondly ruminated on in his later writings. In that way, Beard epitomizes so much of what I adore about his home state.

I planned my first day trip to that specific stretch of shoreline with Beard in mind, driving solo on a drizzly winter morning until I reached Seaside’s sandy beaches — near where Beard would often dine alfresco in Ecola State Park, go crabbing as a boy and indulge in the many seafood treasures hoisted fresh from the ocean. This is where Beard would return nearly every year, and near where his friends would later sprinkle his ashes in the shadow of Tillamook Head. As I stood watching foamy waves pound the shore, I tightened my scarf and imagined a summer picnic of Beard’s onion tea sandwiches.

In the years since that day I first shivered on the Oregon Coast, I’ve come to see in Beard’s legacy something far less commercial than a man who helped pioneer a “foodie” renaissance and far less sweeping than a chef who redefined American cuisine. I see Beard less in the luxurious limelight of upscale dining and more in the simple hours spent lounging on a blanket with bottles of crisp pilsner and gossiping with friends, the sunny hedonism of returning to a beloved beach again and again — a full-hearted embrace of quiet pleasures for their own sake. 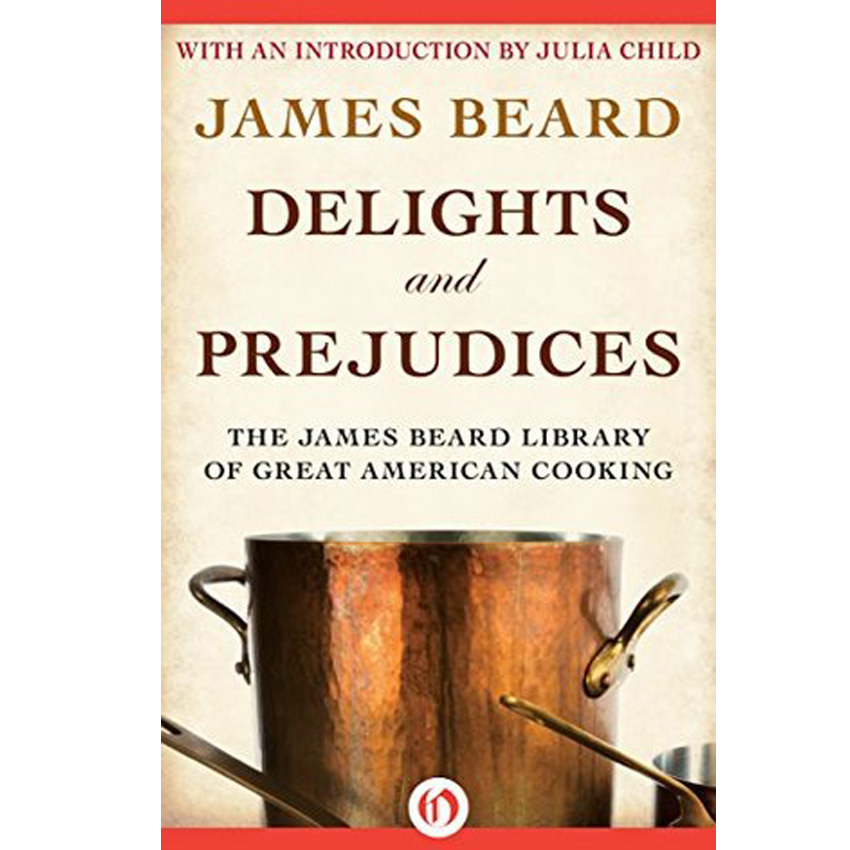 Read “Delights and Prejudices.” One of the nearly two dozen books he authored, Beard’s twice-revised 1964 memoir pairs tales from his life with accompanying recipes. He writes fondly of his childhood in Oregon and includes a handful of family dishes inspired by those early years. I’ve used it as a cookbook and an inspirational kind of travel guide; it functions nicely as both.

Watch “America’s First Foodie.” The 2017 PBS documentary “James Beard: America’s First Foodie” includes interviews with Beard’s surviving contemporaries as well as many other culinary luminaries — highlighting his life in Portland and how he pioneered the farm-to-table movement.

Go crabbing and clamming. Beard frequently praised the gastronomy of the Oregon Coast, and a hands-on way to experience it is to go crabbing or clamming. After “America’s First Foodie” debuted, co-producer Kathleen Squires published a Beard-inspired guide to the Coast in the Los Angeles Times, which outlined both of these experiences.

Peruse Portland’s farmers markets. When the Washington Post’s food critic Tom Sietsema named Portland America’s top food city in 2015, he claims he was won over by the city’s fresh ingredients. Its farmers markets show off this bounteous produce and double as festive celebrations of the grown-here goods Beard cherished.

Try his famous onion sandwiches. Beard called onions “one of nature’s most amazing works of art.” And he loved onion-and-brioche tea sandwiches, an hors d’oeuvre he helped popularize. James Beard Award-winning chef Naomi Pomeroy has her take on his classic on the menu at her swanky Portland cocktail bar Expatriate. It’s also an easy recipe for home entertaining.

Taste it all at Feast Portland. Feast stormed the scene in 2012, luring celebrity chefs, trendsetting writers and rising culinary stars to Portland each September. It’s not Beard’s festival, of course, but it captures the spirit he helped inspire in American food.

JD Shadel
JD Shadel is a queer writer, editor and producer whose work appears in The Washington Post, VICE, Fodor’s Travel, The Atlantic CityLab and many others. When not hunched over a keyboard in one of Portland’s many cocktail bars, they hit the road in search of Oregon’s emptiest trails.