A Sidecar Full of Chocolate

I’ve always been an explorer, constantly seeking some secret thing around the corner. Growing up in Singapore and having zigzagged across most of Asia by bus, train, boat, motorbike and camel before moving to Oregon at 18, it was clear I loved the search.

I’ve since founded a company, Treehouse Chocolate, based upon my experience living in a treehouse on a cacao farm in Hawaii. Treehouse Chocolate is built upon the philosophy of making premium chocolate a portable item you can take on adventures. The single serving drinking chocolate can be made using just hot water.

So here I am, balancing running a business and still having a fire burning bright to get lost on dirt roads. We decided to road test Treehouse Chocolate using a Ural Sidecar Motorcycle on a 1,500-mile motorcycle loop, searching for unique places in Oregon to make drinking chocolate. This state is beautifully vast, and these drinking chocolates are deliciously portable, so it became a fun challenges to seek extreme locations to enjoy a mug of chocolate.

Starting in Portland, me and a fellow adventurer/photographer, Shaun Daley, set out on a seven-day motorcycle loop around Northeastern Oregon. Join along on our story, but first I suggest making a tasty drinking chocolate:

Portland to Pendleton and La Grande

We took Interstate 84 East out of Portland, skirting the beautiful Columbia River. The drive must have been distracting because somewhere outside of Pendleton we began running out of gas — and daylight.

Scrambling to find a cool place to stay the night, we found “The Haunted Hotel” outside of La Grande. Technically it’s called the Hot Lake Springs Bed & Breakfast, but as a former 1920’s hot springs resort and mental hospital, rumors of ghost sightings persist.

Thankfully, the property was recently re-converted back into a B&B. As soon as we read its description, we instantly knew, Bam! That’s our spot!

It’s hard to ignore the “Haunted Hotel” nickname when you arrive at the looming Victorian-era mansion at dusk. Behind a black iron decorative gate, a neon red signs reads “Hot Lake Springs.” But once closer, you realize the hissing sound comes from steam vents and the screeching you hear is actually peacocks running around the property.

In the morning, after extra helpings of coffee and waffles in the bright breakfast room seemingly untouched since the 1920’s, you can tour the three-story war museum (reportedly just a half of the owner’s personal collection) and then soak in the vintage bathhouse by the steaming lake.

Don’t pass up this one-of-a-kind hotel, where you can experience the past firsthand while relaxing in a soothing hot spring. 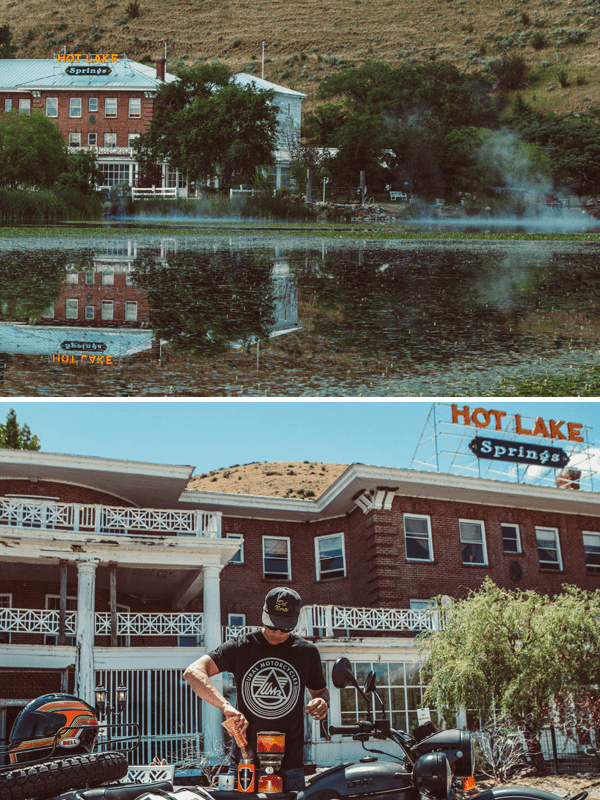 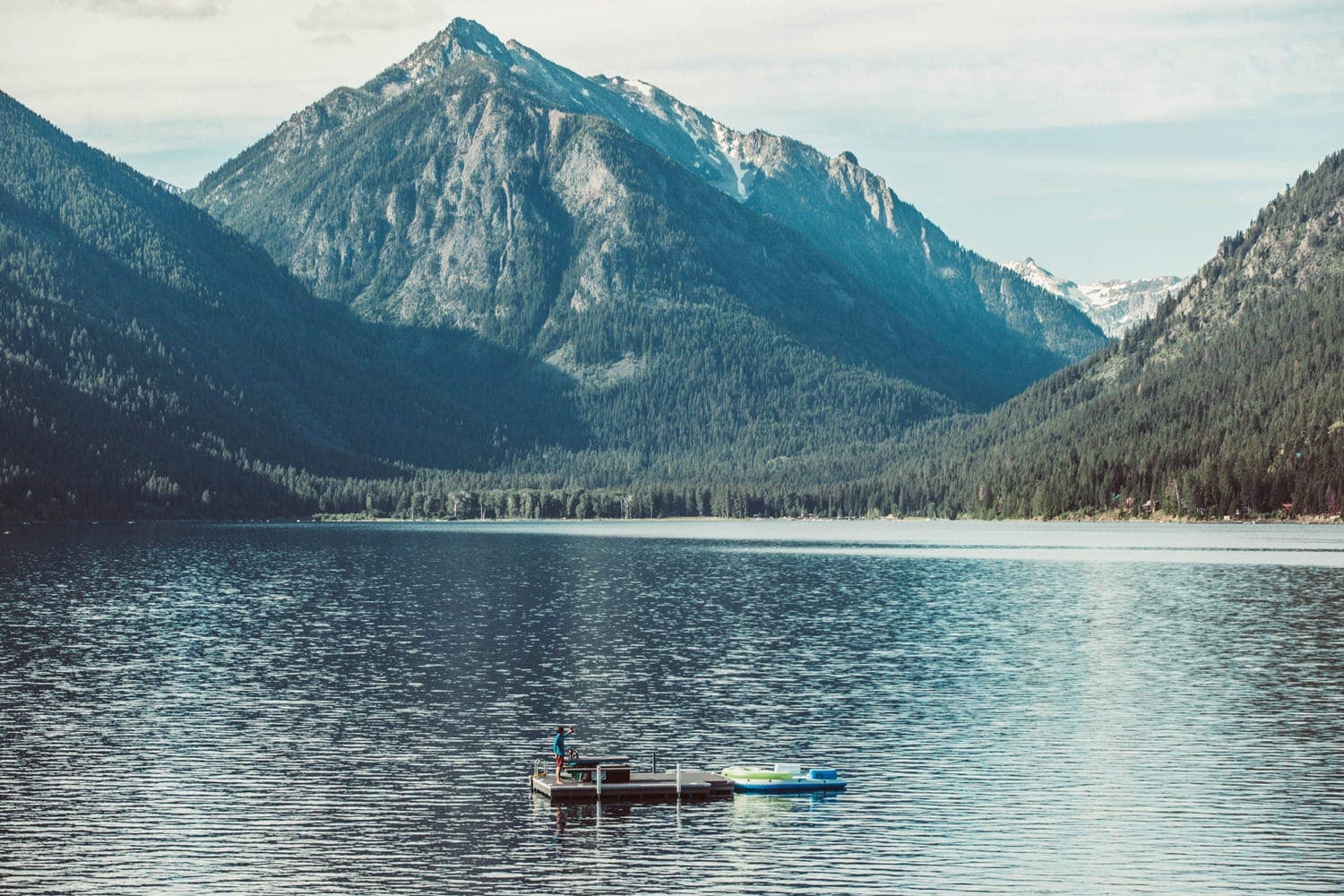 From La Grande, we took Oregon Route 82 until it dead ends at Wallowa Lake. Just before the lake and its town of Joseph, the landscape opens up into big sky territory, where you’re driving through golden grasslands and the horizon is carved by snow-dusted mountains.

Joseph itself is a picturesque town, a throwback to a time when people exchanged news at the local coffee shop rather than their Instagram feed.

If you’ve made it to Joseph, then you have to see Wallowa Lake. The lake shoreline is dotted by floating docks about 200 feet out into the water. This seemed like a perfect place to make a drinking chocolate. 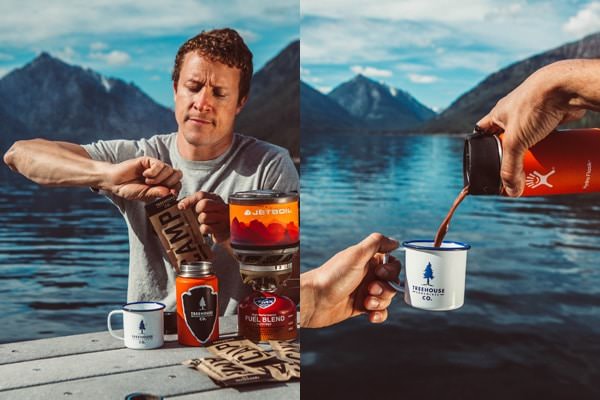 We heard about our next destination from an older cowgirl in a Joseph burger joint. She said, “You can ride that motorcycle all over Oregon, but you won’t find a place more precious than Zumwalt Prairie.” Her voice then drifted off as she became deep in thought about those majestic hills.

With a tip like that, we figured it was a worth a couple days’ detour.

Zumwalt Prairie is North America’s largest remaining grassland of Pacific Northwest bunchgrass. With 33,000 acres of wildlife preserve, 4,400 of which is designated a National Natural Landmark, the Zumwalt Prairie is a sea of tall grass surrounded by the grand Wallowa Mountains. Peaceful and removed from the world, it’s a cowgirl’s dream to say the least. 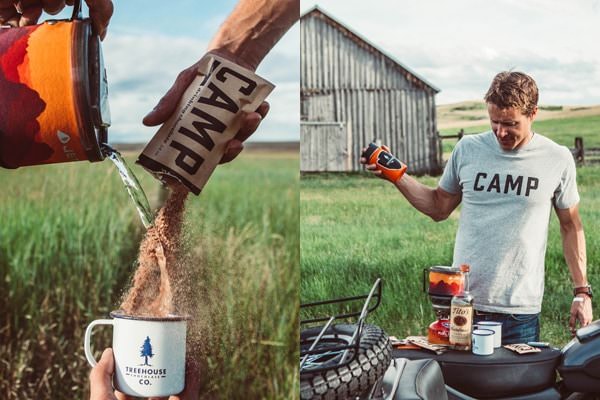 We were making iced chocolate martinis in front of an old barn when two men with matching white beards, both named Bob, drove up in an old Subaru. They mentioned they worked for the nature preserve and just up ahead was a place we couldn’t miss called Buckhorn Overlook. “It’s Oregon’s version of the Grand Canyon” one Bob said.

The gravel road ended at an abandoned fire lookout and barn above the vast expanse of Hells Canyon Wilderness. Hells Canyon is the deepest river gorge in North America and one of the deepest gorges on earth. With the Snake River winding through it, Hells Canyon serves as a natural state border to Idaho. 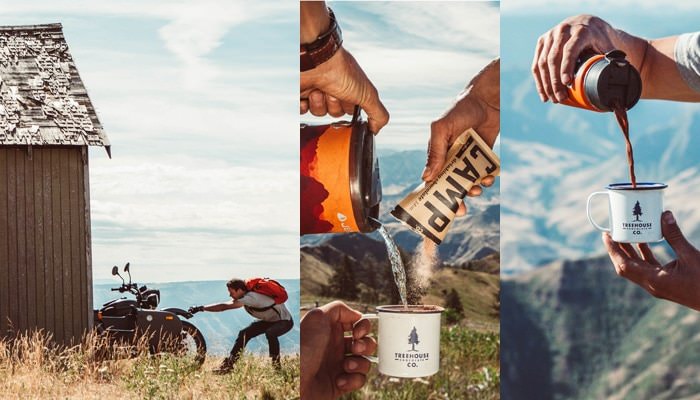 We decided to swing into Baker City for burgers and beers at the famous Barley Brown’s Brew Pub and suddenly found ourselves in the middle of the annual Hells Canyon Motorcycle Rally.  Naturally, we parked the bike in the middle of the parade and made iced drinking chocolates.

Once dubbed the “Queen City of the Inland Empire” during the height of the gold rush, this town still bares the mark of a booming gold-town days and nights.

The Strawberry Mountain Range is like Oregon’s version of the Rockies, holding five of the seven major life zones in North America.

It’s an alpine oasis surrounded by an otherwise flat desert region. You can spend days hiking between its seven lakes and not see another human being. 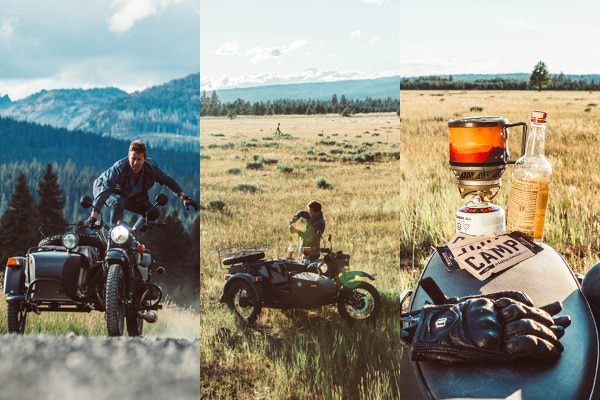 Next stop, the Painted Hills, a red dirt moonscape dubbed one of the 7 Wonders of Oregon. This colorful landscape is the result of an ancient river floodplain.

Just down the road at the Thomas Condon Paleontology Center, you’ll find the remains of rare saber-toothed tiger, camels and rhinoceroses.

It was so windy that day the drinking chocolate poured sideways!

We had heard of a standing wave in the middle of Bend and thought we’d try our luck in the waters of the Deschutes River for a day of surfing.

In the center of town by a main bridge, you’ll find the Bend Whitewater Park. The $9.6-million artificial wave park was built by the city of Bend for surfers, kayakers and tubers. As we would quickly learn, the middle lane is not for the novice river surfer. After numerous failed attempts to surf the wave, Shaun was tossed over the waterfall.

On that note, we started the final stretch back to Portland, where hot showers and soft beds awaited us. 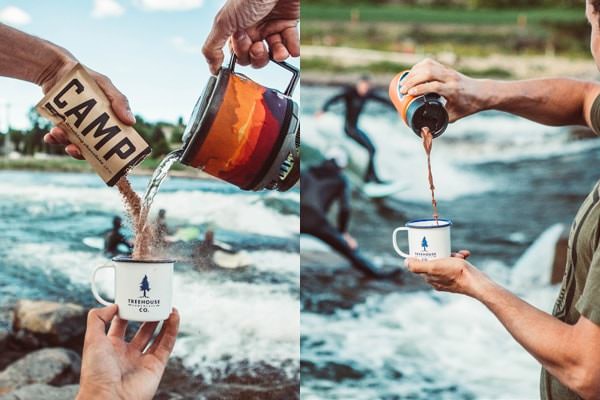 In all, we road 1,500 miles on a sidecar motorcycle loaded with Treehouse Drinking Chocolate with no plans but to seek out the most beautiful spots in Oregon.

We proved our point: Treehouse Chocolate is perfect for adventures.

Aaron Koch
Aaron Koch is the founder of Treehouse Chocolate, a sustainably sourced drinking chocolate company based in Portland. Aaron has lived in Singapore, Oregon, Hawaii and Indonesia, working every odd job imaginable, from a sailboat deliverer, dive tour operator and high-rise window washer to an organic farmer. After living in a treehouse on a cacao farm in Hawaii, Aaron moved to Portland to build Treehouse Chocolate, which buys organic cacao direct from farmer-owned cooperatives and produces single-serving drinking chocolate.

Mitchell, Eastern Oregon
Is any of the information on this page incorrect? Suggest an update
Ready to hit the road? Bring our travel magazine along.