Towering cliffs painted in desert hues and honeycombed rock formations sculpted over millions of years form the landscape of this remote region. In 1965, 17 California bighorn sheep were reintroduced into Leslie Gulch. The herd has expanded to over 200 animals. Mule deer and Rocky Mountain elk are also found in the area. Bird watchers can spot chuckar, numerous songbirds, raptors, California quail, northern flickers, and white-throated swifts. Coyotes, bobcats, bats, and many reptiles, including rattlesnakes, also live in Leslie Gulch. The talus slopes and unique soils of Leslie Gulch support a number of rare plant species. Two annual species are found only in the Leslie Gulch drainage (Packard’s blazing star and Etter’s groundsel). Grimy ivesia, sterile milkvetch, and Owyhee clover are rare perennials found at a few isolated sites in the canyon. Directions: Follow Highway 95 South, 59 miles from Ontario to the Leslie Gulch turnoff, then turn west on a dirt road and travel for about 25 miles. 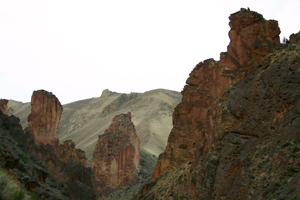 leslie_gulch.jpg
Is any of the information on this page incorrect? Suggest an update
Ready to hit the road? Bring our travel magazine along.