The Jordan Craters area is a 27 square mile olivine basalt lava flow which is estimated to be between 4000 and 9000 years old, based on the degree of lichen development on the rocks. An 18-acre flow within the field is thought to be less than 100 years old because lichens have begun to colonize it. Coffee Pot Crater, the only feature to which there is vehicle access, covers about two-thirds of a square mile and is a well-preserved steep-sided crater. One of the most interesting features in the vicinity of Coffee Pot is a sequence of roughly aligned spatter cones. They consist of blocks of lava, probably ejected in a semi-molten state, that have welded together, forming cones. The interiors of the cones have a glassy “furnace lining” look because they were vents for hot gasses. Several circular features to the northeast of the crater are collapse pits, probably formed by the collapse of lava tube roofs. Flow structures include pahoehoe (a Hawaiian term meaning “rope” or “ropy” that describes smooth, billowy lava flows) pressure ridges and lava gutters that illustrate how mobile molten rock can be. Directions: Follow Highway 95, 9 miles north of Jordan Valley, Oregon then turn west. 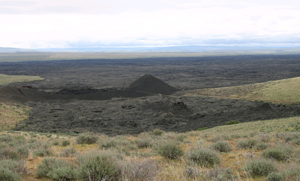 jordan_craters.jpg
Is any of the information on this page incorrect? Suggest an update
Ready to hit the road? Bring our travel magazine along.