In the Cascades of Southern Oregon, 6,173 feet above the Pacific Ocean to the west, a lake of perfect blue fills a void where a peak once stood. Roughly 7,700 years ago, a stratovolcano called Mount Mazama erupted cataclysmically, so enthusiastically spewing its contents that it gave away its foundation in the process. As the magma chamber emptied, the 12,000 foot peak collapsed in on itself, losing a mile of its height as it subsided into a caldera five miles across. Over time, this self-contained watershed filled with snow and rain, untainted by impurities found elsewhere. Now, the ultra-clear and brilliantly-blue body of water is called Crater Lake, the deepest lake in the United States. 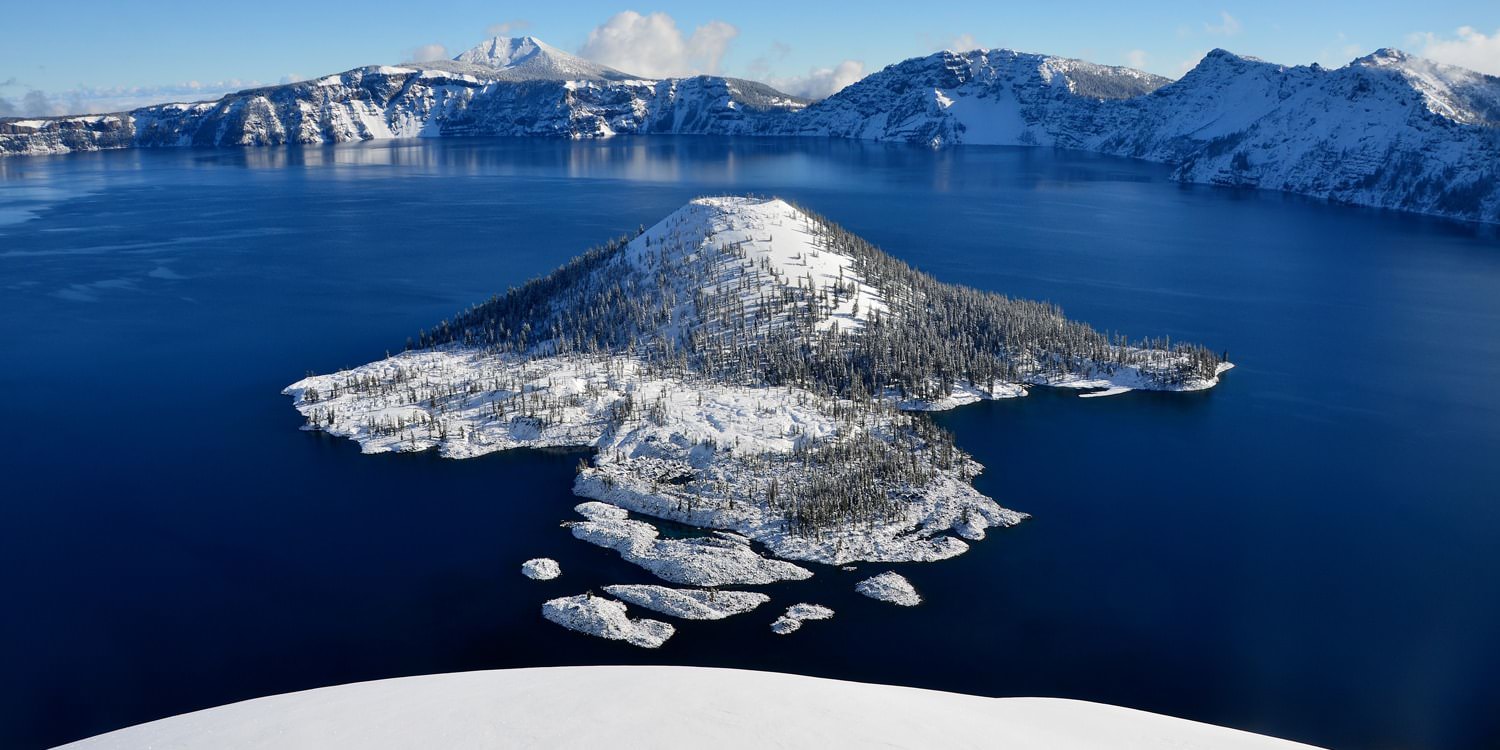 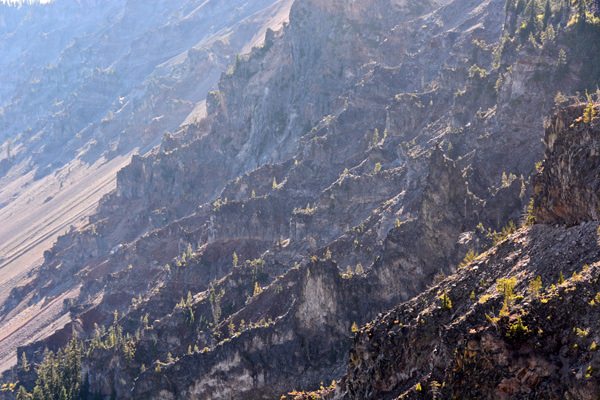 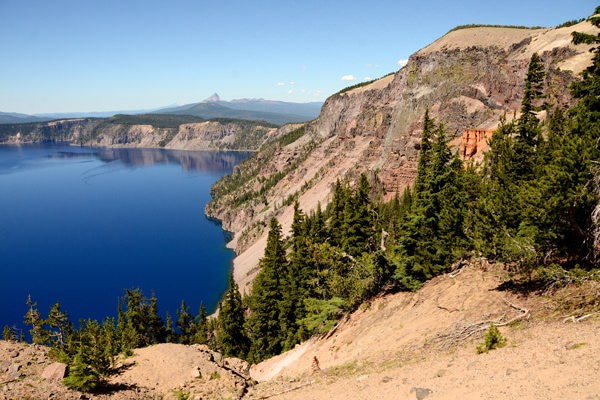 Mt. Thielsen looms to the north

Most of Crater Lake’s visitors come in the summer, but I’m convinced that winter is its best season. Indeed, winter makes Crater Lake what it is, dumping an average of 524 inches of snow each year on the caldera rim. That snow melts in summer and makes its way down to the lake below, joining the water that fills the basin to a depth of 1,943 feet. When the park and its peaks are blanketed in white, the blue surface below shimmers all the brighter, and a sunny winter day yields scenes that inspire and entrance. Snowshoeing and skiing on the rim or the slopes below allows access to winter wonderlands beyond the reach of cars, in forests buried in feet of fresh powder. 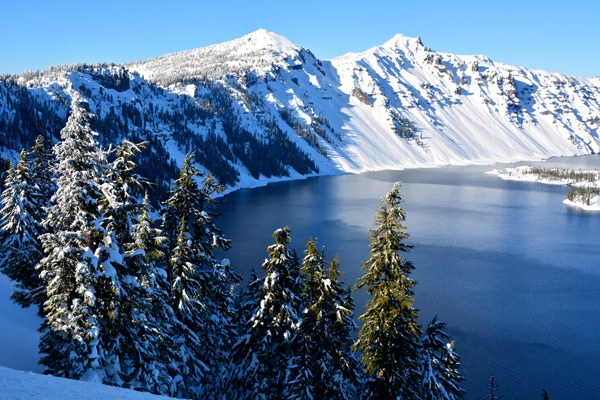 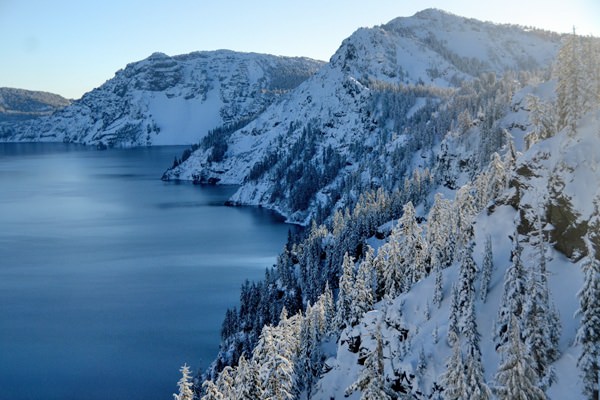 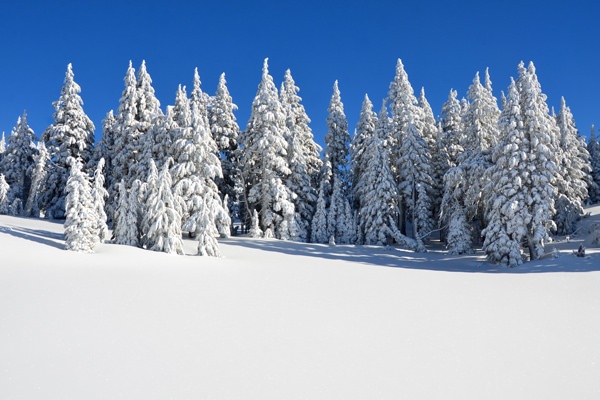 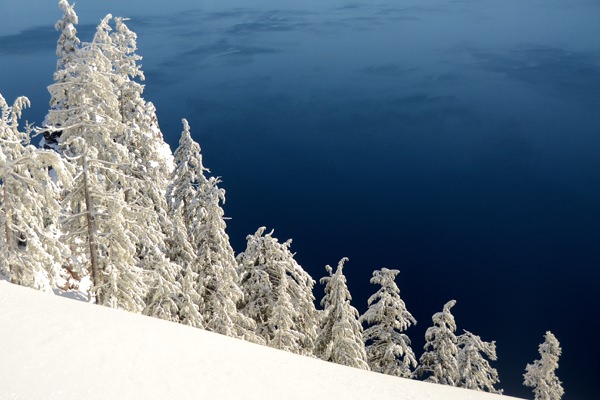 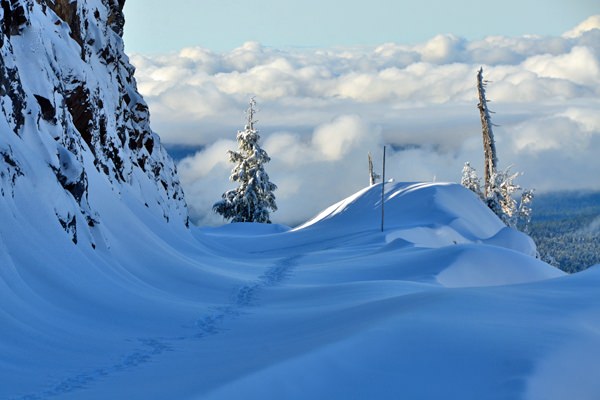 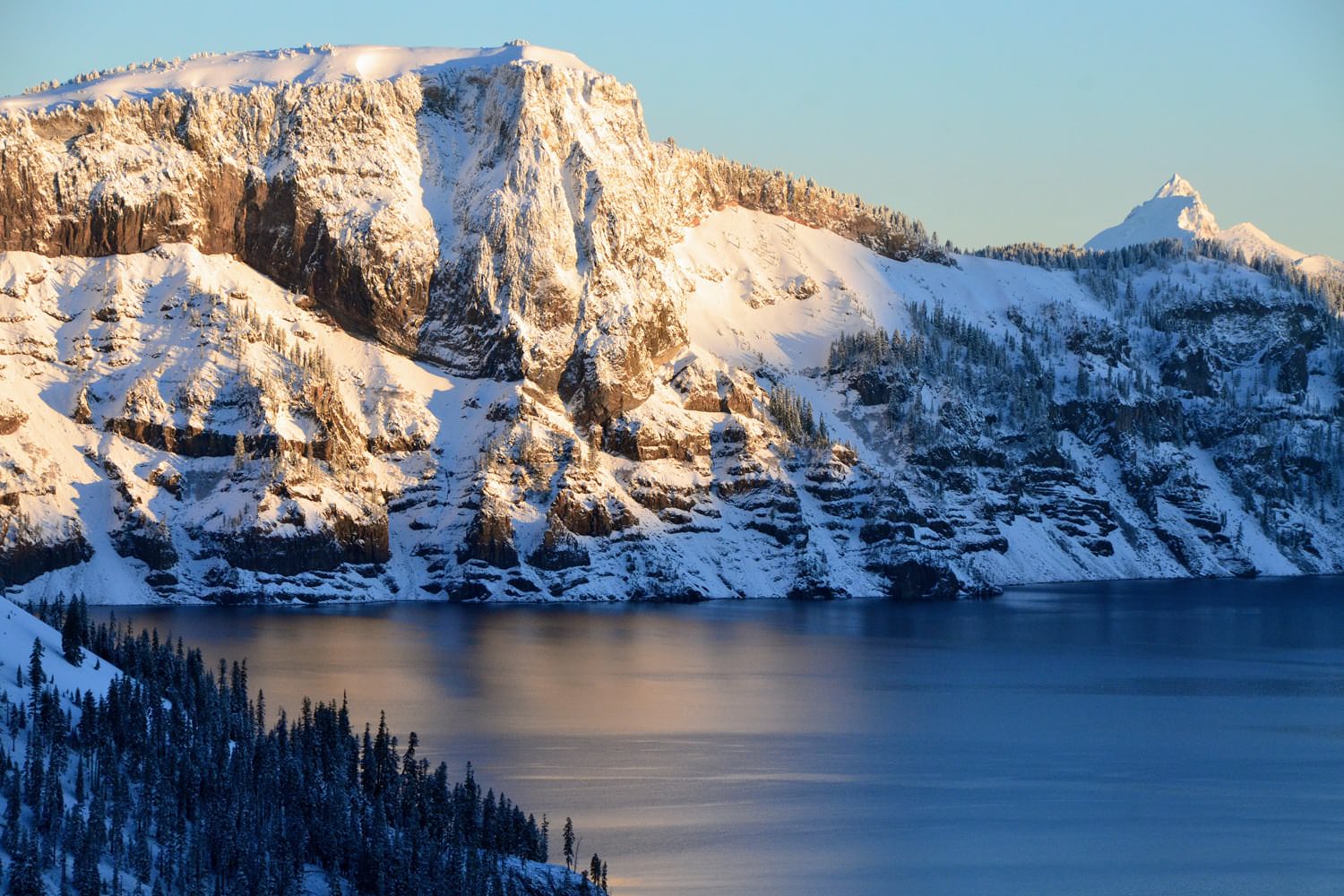 This is not to say that spring, summer, and fall are without wonders of their own. With the snow gone, the park fully opens itself to exploration and the dramatic views from Rim Drive, encircling the lake, are easily attained. Trails to the peaks on the rim carry hikers high above the water, but the highest point in the park is not on the rim. Mount Scott looms to the east, and from its summit you can gaze back west towards the caldera, a view that puts the landscape in a new perspective.

Hiking down to Cleetwood Cove means access to the boats that carry passengers to and from Wizard Island, a cinder cone that formed after the lake began to fill. A trail leads to the summit of this volcano within a volcano, and at the top you can then drop into a caldera within a caldera, where the entire rim is blocked from view and waits to greet you when you emerge back on top. Phantom Ship, the lake’s other island, sits near its southern shore, taller than it looks from above. Marmots, black bears, coyotes, elk and martens are some of the wildlife that inhabit the forests of mountain hemlock, Shasta red fir and whitebark pine, but the most common animal encountered is the golden-mantled ground squirrel, which, cute as it may be, should not be fed. 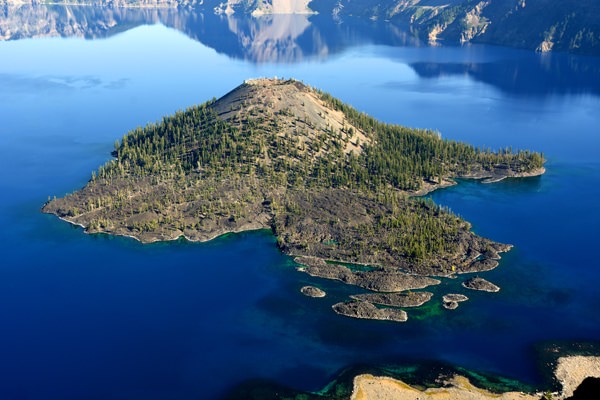 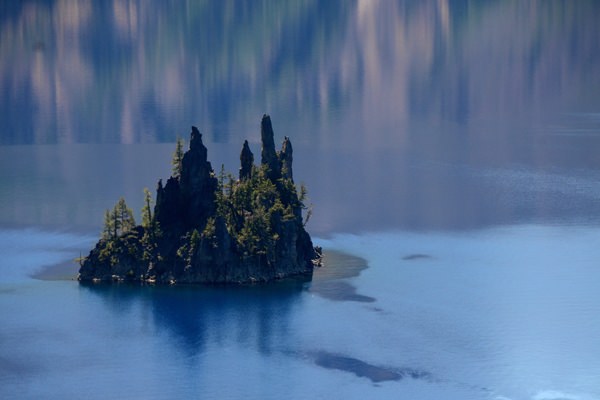 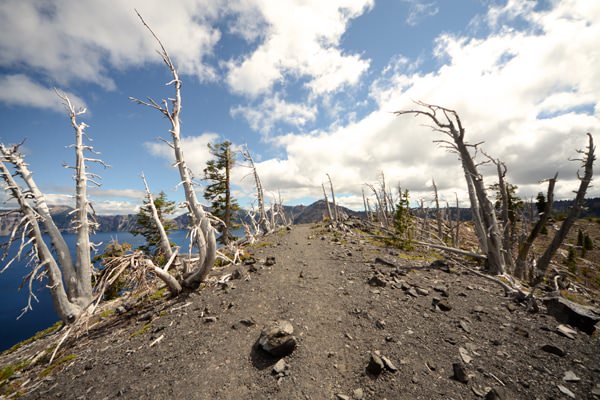 On the rim of Wizard Island 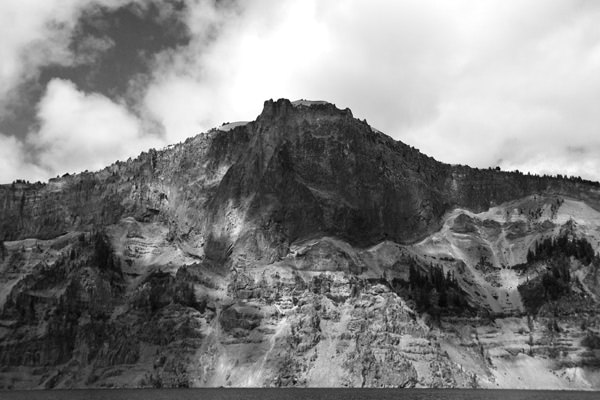 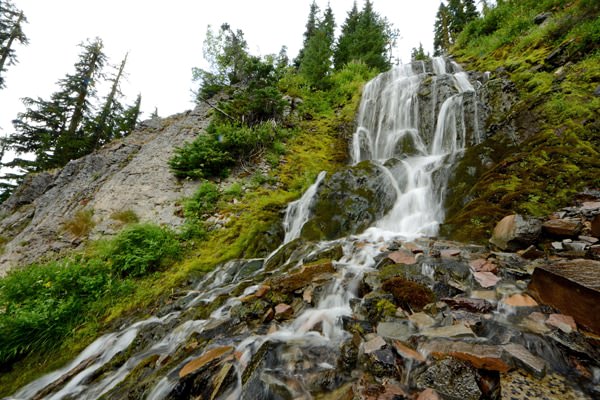 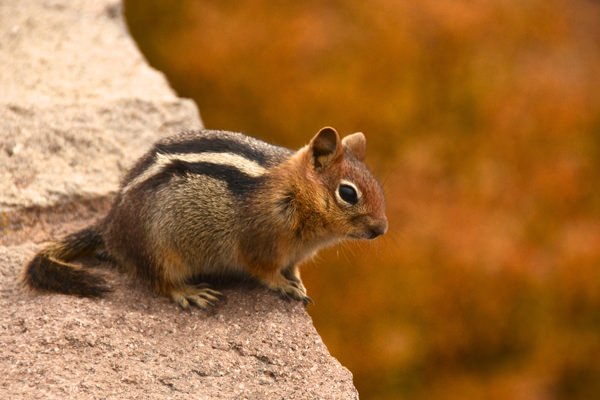 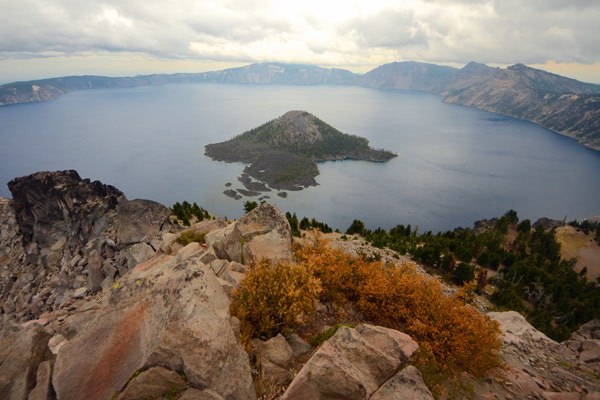 Autumn view from the Watchman

The sun sets and the blue dims, but night brings wonders of its own in any season. The dusky colors of the ridges that form the western horizon are a gradient that fades into clear skies, thousands of feet above and miles away from the nearest sources of light pollution. Stars fill the night and the caldera is quiet, save for a breeze that swirls among the peaks.

From the tower atop the Watchman Lookout on the western rim, I’ve watched meteors streak across the sky above Crater Lake and the Milky Way move through the night as we spin inside it. There is never a time when this park isn’t in full glory. Even when the caldera is shrouded in clouds and the lake is invisible from the rim, the wonder is still there. Knowing the natural history of Crater Lake fosters an appreciation of the landscape in any condition. And when the clouds do lift, and the sunlight hits the water again, the perfect blue reminds you of any wonder you may have forgotten. 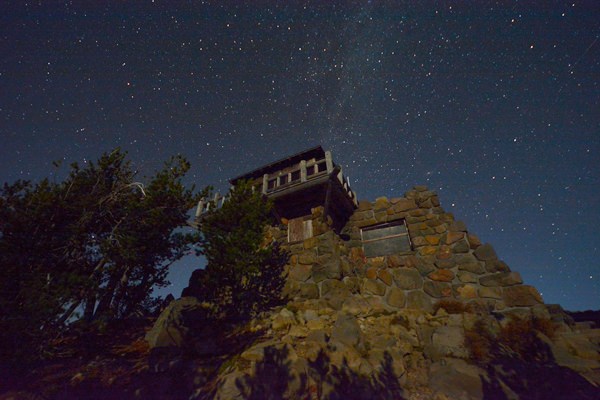 Night on the Watchman 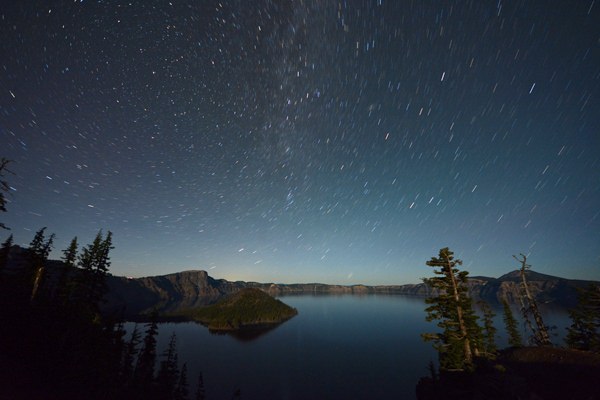 Chaney Swiney
Chaney Swiney is a naturalist, photographer, and cartographer living in Bend. Originally from Tennessee, where the Great Smoky Mountains first called him to the wild, he moved to Oregon for grad school and to explore the magnificent and varied landscapes that make Oregon so spectacular. He now works as a guide, sharing the wonders of Oregon’s natural history out among the peaks, lakes, and trees of the Deschutes National Forest.

Klamath Falls, Southern Oregon
Is any of the information on this page incorrect? Suggest an update
Ready to hit the road? Bring our travel magazine along.