Washed Ashore: Art to Save the Sea

Angela Pozzi fell in love with the Oregon Coast a long time ago. Born in Portland, Pozzi spent much of her childhood at the Bandon cabin her family has owned for 85 years. “It was always my favorite place in the world. I always wanted to find a way to live here,” Pozzi said.

Personal tragedy was part of Pozzi’s path to Bandon. Her husband of 25 years passed away after a long and difficult illness, and Pozzi, an artist and teacher, found herself called to the coast. “I needed to start a new life, so I came to the ocean to heal,” she said. But when she moved to Bandon in 2007, she found that the ocean needed healing.

Pozzi was dismayed by plastic garbage she saw washing up on her beloved beaches. Reading about the massive problem of ocean pollution, she learned about the terrible impact human garbage was having on birds, fish and sea mammals. She read about sea turtles eating plastic bags because they look like jellyfish and seals and sea lions get entangled in trash. Fish, birds and even whales are killed by injesting plastic, which they mistake for food. “I was heartsick. I had no idea what bad shape the ocean was in.”

Inspired to act, Pozzi founded Washed Ashore: Art to Save the Sea, a community-based nonprofit dedicated to educating people through art. Using plastic trash that had washed up on Oregon’s beaches, Pozzi created enormous sculptures of threatened sea creatures. To date, Washed Ashore has collected tons of debris from Oregon beaches and has with the help of thousands of volunteers made 32 sculptures and counting. 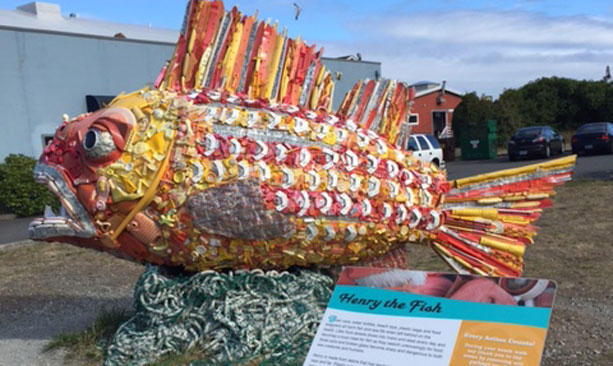 People took notice. Pozzi has worked with zoos, aquariums, colleges, nature centers and art centers around the country. The Smithsonian Institution purchased a small sculpture and education kit for its new Sant Ocean Hall. SeaWorld asked her to create a total of 12 giant new sculptures for its parks in Orlando, San Antonio and San Diego. Washed Ashore sculptures even traveled to the United Nations headquarters in New York City for the UN’s Clean Seas campaign. (The sculptures travel to new exhibit locations year-round.) Pozzi says these world venues will allow her convey her mission more broadly than ever before. “They reach over 15 million people a year.”

When asked if she has a favorite among the new sculptures, she said, “I have to fall in love with every one of them to do a good job.” But she’s having fun with a 15-foot long parrot fish and a giant octopus. “Each tentacle is six feet long. I’ve always wanted to build an octopus,” she said.

Community participation is a key element of Washed Ashore, and everyone is welcome to join in. Visitors can drop in at the Harbortown Event Center in downtown Bandon and make art out of garbage collected from beaches. Participation is free and open to people of all ages and ability levels. “It is cross generational. That is really important to us. It’s a really fun thing for families to come in and do together.”

Pozzi said she feels very lucky to have found her calling. “Education has always been my passion as well as art and conservation. This project brings it all together for me, and I’ll never do anything else.”

The Washed Ashore Exhibit is displayed at the Harbortown Event Center at 325 Second St SE in Bandon. Volunteer sculpture-building workshops are ongoing. Find out more at washedashore.org.

Eileen Garvin
Eileen Garvin lives and writes in Hood River. When she’s not hunched over her keyboard or digging in the garden, you can find her mountain biking, kiteboarding, hiking, skiing or camping somewhere in Oregon.