Yachats is known as the hidden gem of the Oregon Coast — and after a visit to Overleaf Lodge & Spa, it’s easy to see why.

The oceanfront resort is located at the northwest tip of town, resting atop an ancient basalt lava flow and surrounded by trees, where it’s easy to spend hours just staring at the scenery. To the east are the remains of an old-growth forest, where you can still see stumps with scars from two-man saws. Scenic trails are in every direction: the historic 804 trail weaving along tide pools and coves; the Gerdemann Botanic Preserve footpath showcasing rhododendrons and exotic plants; and the Ya’Xaik trail through lush forest.

I had the opportunity to visit the Overleaf Lodge & Spa in February 2017 for its 20th anniversary party, a celebration that included live music, interpretive presentations, fashion shows and a lot of friendly faces.

But, surprisingly, my favorite part about my stay was not the fantastic ocean view from my room, walking the 804 trail along secluded coastline or even the rejuvenating moments at the spa — rather it was witnessing the continued commitment of the Overleaf Lodge to give back to the community.

Below are just a few ways that the Overleaf Lodge gives back. 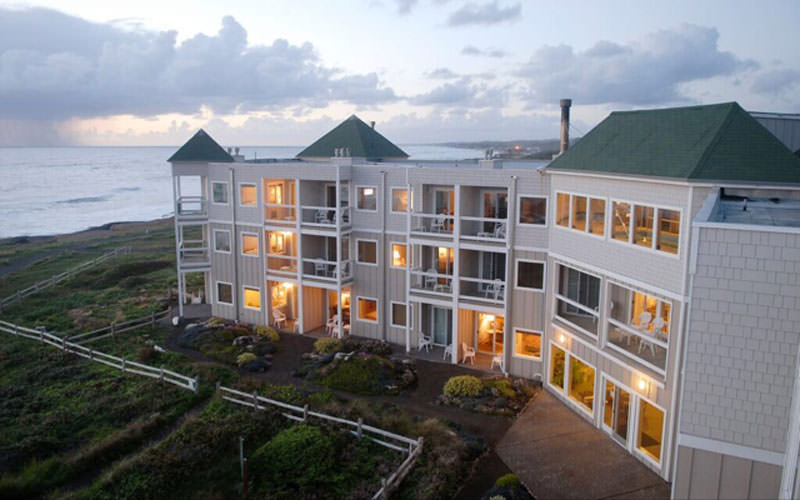 Every winter the Overleaf hosts an annual canned food drive. Guests that bring at least two cans of food are given a 20% discount off their nightly room rate from Sunday to Thursday.

The cans are then delivered by staff to South Lincoln County Resources, a local nonprofit that provides services for low-income families. In 2016, the Overleaf and its guests donated 10,344 pounds of food through the annual canned food drive.

The lodge is home to a special community knitting project. A box of needles and wool sit next to the fire, where guests can help make blankets in support of My Sister’s Place, a domestic, sexual and dating violence prevention and intervention program located in Newport.

Each guest picks up when the last person left off, so the entire blanket has a range of styles. The first blanket was hand-delivered to My Sister’s Place in 2016, where it was awarded to one of the temporary residents. Future blankets will be sold during silent auctions at the Overleaf, with proceeds donated to My Sister’s Place.

The scenic 804 trail is more than a historic landmark; it’s also a local treasure. Every August since 2008 the Overleaf has joined forces with SOLVE, the Yachats Trails Committee, Dahl Disposal Service and Oregon Parks and Recreation Department to remove weeds from the famed trail. After volunteers spend the morning pulling ivy and other invasive species, they’re treated by the Overleaf to a large barbecue and free spa day passes, plus the chance to win spa treatments.

The positive impact of Overleaf goes far beyond the Oregon Coast. The lodge participates in Clean the World’s Hotel Recycling Program. Housekeeping staff collect unused soap and other discarded hygiene products left behind by guests. The items are then shipped to Clean the World and repurposed in locations across the globe to help prevent millions of hygiene-related deaths and encourage healthy childhood development.

Giving Back to Staff

I had the opportunity to meet with many staff at the Overleaf and they have all expressed sincere gratitude for how much they feel at home at their workplace.

A great of example of this happened last winter when Overleaf staff each received a complimentary night stay at the lodge as their holiday gift. This was a great opportunity for staff to enjoy time off and to better understand the guest experience. This knowledge shows itself in every interaction I’ve had with staff on site.

As of 2017, the Overleaf has been including donations into the total cost of night stays at the property. Every night you stay at the property means one more dollar of grant funding that is given to the Travel Oregon Forever Fund projects.

I certainly hope that you have a chance to visit the Overleaf Lodge and Spa soon. It’s a chance to give back to Oregon while immersing yourself in scenic surroundings. You won’t regret it.

Andrew Grossmann
Andrew is the Destination Management Specialist at Travel Oregon. When he is not fortunate enough to be working with the incredible people that make up Oregon’s tourism industry, he can be found hiking his way from the huckleberry fields of Jefferson Park to the basalt shorelines of Cape Perpetua.

Where should we stay for a romantic coastal getaway?

On the North Oregon Coast, Stephanie Inn in Cannon Beach is one of the coast’s most luxurious lodging options. Cannon Beach offers quick access to scenic areas including miles of sandy beach, Oregon’s iconic Haystack Rock and beautiful Ecola State Park. For a runner-up, the views of Cannon Beach and Haystack Rock can’t be beat…