Based in the foothills of the Coast Range, the Confederated Tribes of Grand Ronde comprise a multitude of Native tribes from the Pacific Northwest. They include the Kalapuya of the central river valleys; the Chinook along the Columbia River; the Tillamook along the Coast; and the Molalla, Umpqua, Rogue River, Chasta and others to the south.

For generations, their people fished, hunted, gathered, traveled and traded, establishing centuries-old cultures in homelands that stretched across what is now called Western Oregon, Southwest Washington and Northern California.

Their way of life was forever altered in the 1800s with western expansion, when more than 30 tribes and bands were forced from their lands and relocated to a 61,000-acre reservation along the Yamhill River in the Coast Range. Before long, most of that land was taken away too, along with their federal tribal recognition and rights. People whose self-sufficiency and connection to place dated back thousands of years were left without a home in their own homeland. It took a deep toll.

Through decades of injustice, the tribes persevered and eventually triumphed. In the 1980s, they succeeded in reestablishing federal recognition as the Confederated Tribes of Grand Ronde, restoring their tribal rights in the eyes of the federal government and regaining a portion of their lands.

It proved a powerful foothold on the path back to self-sufficiency. Today 11,500 acres of that original reservation allotment is the home of a strong and successful tribal confederation. Among the forested hills and verdant river valleys 70 miles southwest of Portland, the Confederated Tribes of Grand Ronde welcome guests to an array of tribal enterprises and visitor attractions. They include the Spirit Mountain Casino, the Spirit Mountain Lodge, the Big Buck Campground, and the Chachalu Museum and Cultural Center, celebrating a tapestry of cultures and a resilient spirit that defines the tribes today. 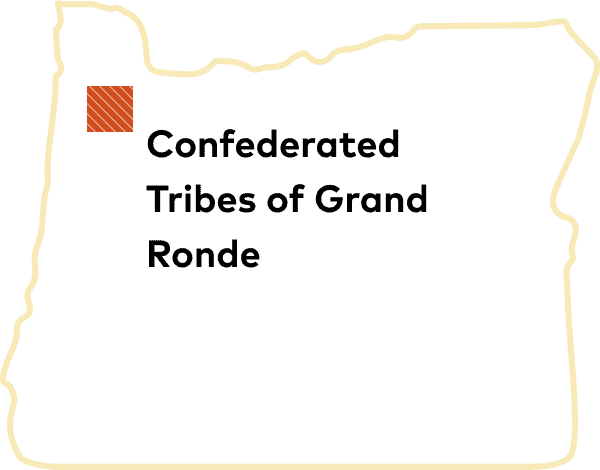 More to See and Do

Advertisements
Ready to hit the road? Bring our travel magazine along.