Featuring Treehouse accommodations for all ages and adventure levels. Out’n’About is truly a treehouse wonderland. With a total of 18 different treehouses, 7 swinging bridges, 4 ladders, a rope course with zip-lines and so much more.

On the ground, relax in the swimming pool fed by the nearby river. With 36 private acres boarding the Sisikyou National Forest, go for a waterfall hike or explore the woods by horseback. 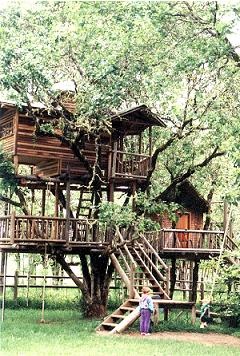 Out 'n' About Treehouses
Is any of the information on this page incorrect? Suggest an update
Ready to hit the road? Bring our travel magazine along.