It’s easy to get overwhelmed by the recreational opportunities around Bend — waterfalls, rivers, hiking trails, mountains to ski and climb, dozens of golf courses and on and on…

Big Mountain Heli Tours operates out the Bend municipal airport in partnership with Leading Edge Aviation, which runs the largest helicopter and fixed wing flight school in the West. Our crew of journalists and photographers — some local Bendites and some first-time Bend visitors — arrived at the airport on a sunny mid-May late afternoon after stretching our legs on a morning hike to Tumalo Falls with our host, Danner, the Portland-based boot purveyors.

Owner Patric Douglas greeted us on our arrival. Douglas isn’t new to adventure entrepreneurship I learned as we waited for the crew to assemble. He shared his background as the founder of Shark Diver, the first commercial white shark diving business in Isla Guadalupe, Mexico. It seems this penchant for excitement and adventure has transcended into his heli tour business; after checking that everyone in our crew had followed instructions to bring sunglasses and a light jacket, we found out that we weren’t just going for a heli tour, Douglas had arranged for a “doors-off experience” on the Ring Of Fire Tour of the snow-capped Cascade Range. Douglas’ signature doors-off flights take the gravity-defying excitement of helicopter touring to the next level with the added intensity of a wide-open cabin with incredible unobstructed views. The Ring Of Fire Tour is the most popular tour offered, with an itinerary that features views of the Cascade Mountains including Mount Hood, Mount Jefferson, Three Fingered Jack, Mount Washington, North Sister, Middle Sister, South Sister, Broken Top and Mount Bachelor. 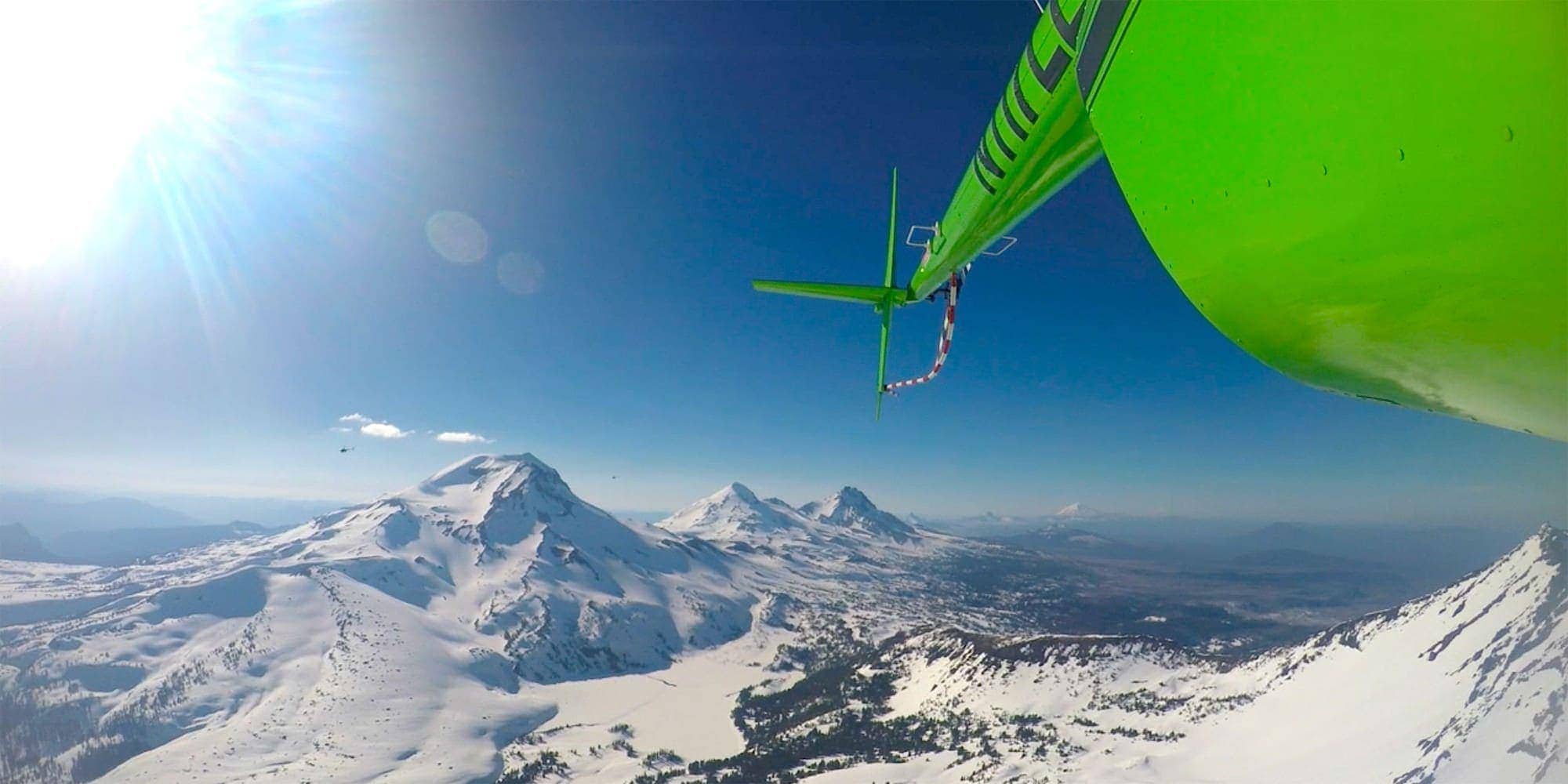 We broke into groups of three and were introduced to our pilots, all local flight instructors. We were instructed on basic safety in and around the helicopter, communication inside the helicopter and, unique to the doors-off experience, to keep our hands, cameras and cell phones inside the helicopter and to zip or stash away anything that could fly out — the ladies were advised to put our ponytails into tight buns in anticipation of “heli hair.” After several more reminders on keeping our hands inside the cockpit, we belted in and put on our communication headsets, prepared for takeoff.

We lifted off in the bright green R44 helicopters, experiencing the giddy excitement of leaving gravity behind and the quick, nimble navigation of the helicopters. We embarked on a trajectory directly over Bend, with narration from our pilot pointing out the ubiquitous golf courses, the Deschutes River dissecting town and giant lava fields on the edge of the city limits. We made our way west along the Cascade Lakes Scenic Byway with Mount Bachelor directly ahead and a landscape saturated in bright green hues of towering pines with their long afternoon shadows.

As we gained elevation and the cabin temps lowered, Mount Bachelor dominated our view. Hovering alongside the peak, I looked down on the snowcats grooming the upper Cow’s Face snowfield, surveying the complex of tree runs off Cloudchaser and Northwest, thoroughly enjoying this unique perspective. 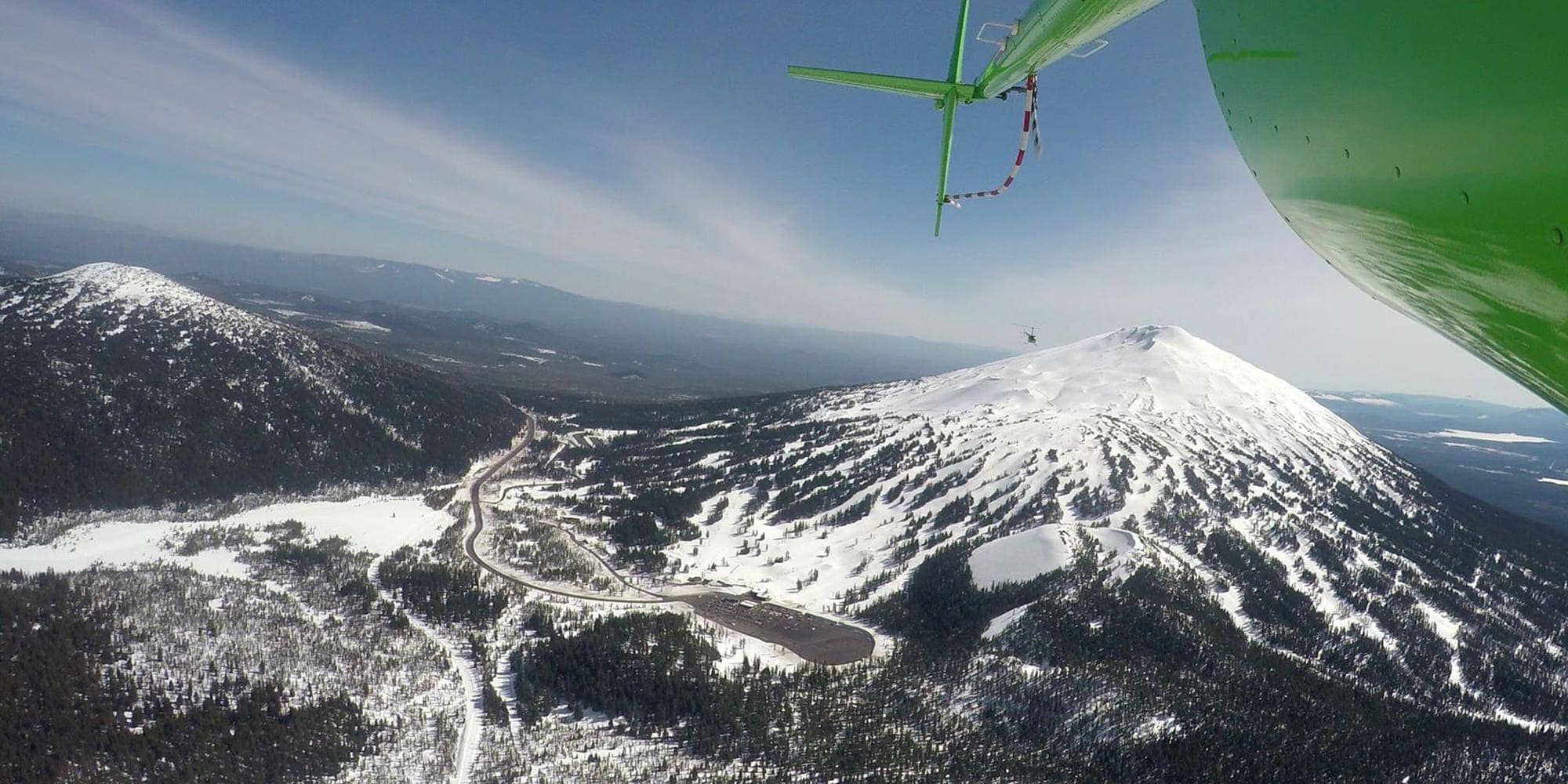 Off in the distance Broken Top beckoned and we made our way north. Our pilot circled Broken Top multiple times, close enough that I could make out the tracks of backcountry skiers and snowboarders in the couloirs and snowfields and scan the cliffs for mountain goats. We experienced some bumps from the uplift on the west side of Broken Top, which added a jolt of adrenaline to the ride. The views extended up along the Cascades with the incredible topography of Central Oregon laid out in all directions.

After getting our fill of the snowy peaks, we headed back along Tumalo Creek and Tumalo Falls, over top of the massive Phil’s Trail bike trail system and into town for a quick look down on the recreational Deschutes River floaters and SUPers in the busy Mill District. 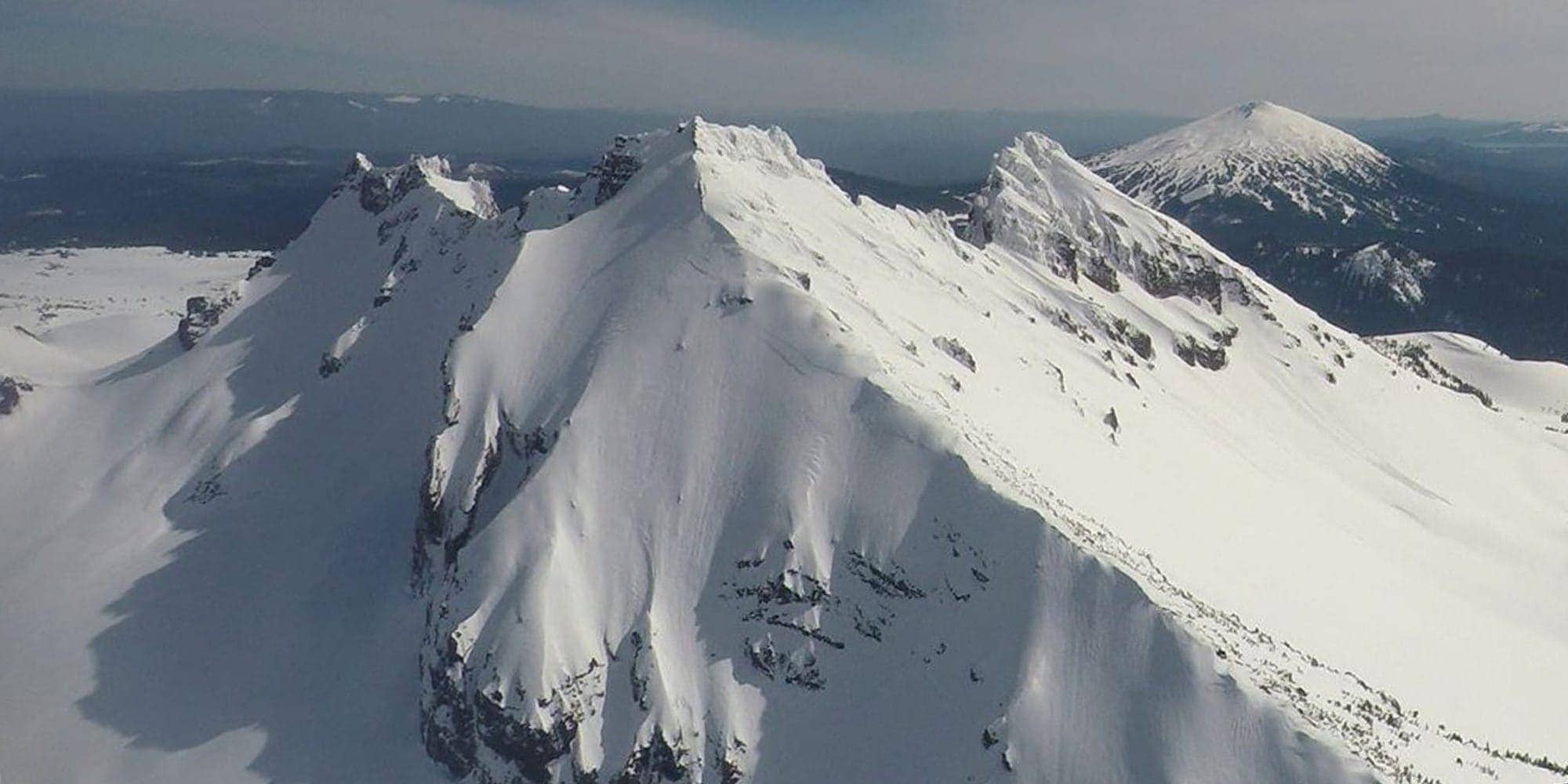 Back at the airport, the thrill of flying doors-off in a helicopter dominated the conversation almost on par with the excitement of experiencing the mountains close up. The tour was equally appealing for the longtime Bend locals and new visitors alike. It proved to be a stunning way to get the lay of the land and an incredibly memorable experience.

Owner Patric Douglas’ shared his goal with Big Mountain Heli Tours, to provide an “attainable price-point experience” not just for the wealthy, but as a recreational opportunity for locals and visitors alike. The Ring Of Fire tour is offered year-round weather permitting; doors=off is available by request during the summer months with flights starting at $179.

Annie Fast
Annie Fast is a lifelong snowboarder and traveler. She was the editor of TransWorld Snowboarding Magazine and prior to that worked at the summer snowboard camps on Mt. Hood. Annie writes about outdoor adventures from her home in Bend.