A Local’s Guide to Ramadan in Oregon

I grew up in a Muslim-American family in California. During the Islamic month of fasting known as Ramadan, my father — an Indian immigrant from Tanzania — would cut a deal with me: If I’d fast a certain number of days, he’d take me to Baskin-Robbins as often as I wanted. Sure, I had learned in Sunday school at the mosque that Ramadan marks the month in which the Prophet Muhammad first received the revelation of Islam’s holy book, the Quran. But for me, Ramadan really meant ice cream — specifically mint chocolate-chip ice cream.

Each day for an entire month, I adhered to my faith and abstained from food and water from morning until sundown. I eventually grew to love Ramadan because it taught me discipline and self-sacrifice, and also because it culminates in a massive festival called Eid al-Fitr (which begins this year at sundown on June 3, 2019), in which Muslims wear brand-new clothes and celebrate. In my case, as a kid, that meant trying to beat all the uncles at the mosque in pingpong.

I have since become less observant in my faith, but ever since I moved to Portland in 2015, I have found myself seeking fellowship with Muslims again. The apparent lack of diversity in Portland compared with other major cities I’ve lived in has made me eager for a sense of community. This is especially true in recent years, given the tragedies that have happened here and across the United States.

This year for Ramadan (May 5 – June 4, 2019) Muslims throughout Oregon have once again swung open their doors extra wide, both to lapsed Muslims like myself and to non-Muslims. If you are eager to learn about the Muslim faith, or about the critical difference between an Indian samosa and a Somali samosa (answer: The Indian ones are tastier, although I might be biased as an Indian American), then Ramadan iftars are for you, as well as the variety of Muslim-owned businesses found throughout the Portland metro region. 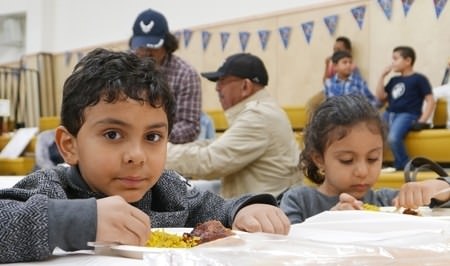 And yes, it’s a good bet that every Muslim has read articles about how breaking your fast with a salad is better for you than, say, a greasy chicken shawarma, but really, who wants to be healthy when you’ve been denying yourself food all day? So eat up this Ramadan. After all, Oregon has great options to experience this month and for the year ahead. Here are some of my favorites. 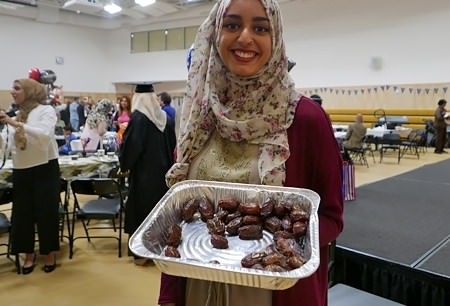 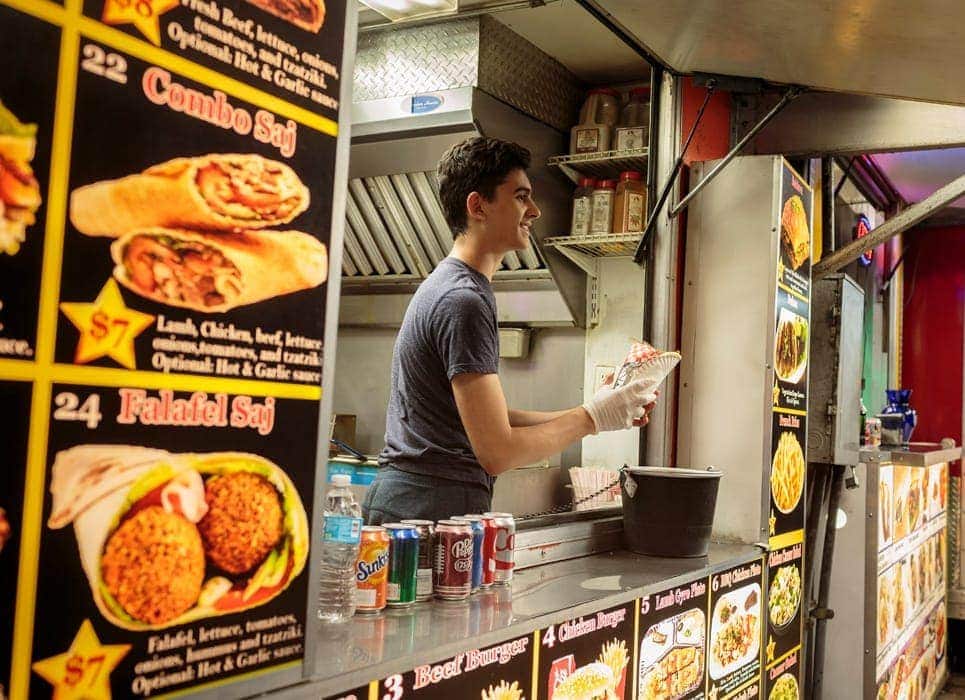 One of the fun things about Ramadan is the way in which food traditions vary from culture to culture. My parents, for example, grew up in Tanzania, where they would customarily break their fast with fresh fruit. In Egypt my friends often break their fast with a date submerged in a cup of milk. In Portland Muslim kids tell me their favorite Ramadan indulgence is late-night doughnuts from Voodoo Doughnut. Oregon has a wide range of options, including a single block in downtown Portland with 10 shawarma stands alone (pictured). Here is a range of options, arranged by type of cuisine. 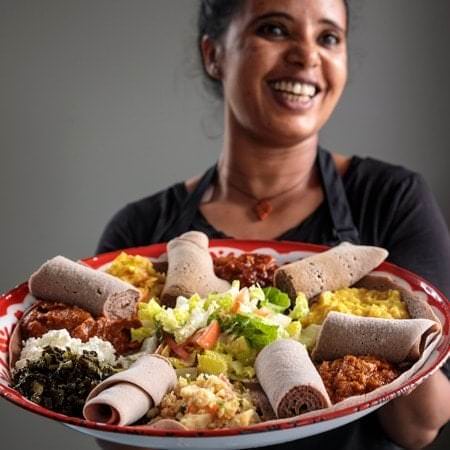 Portland is home to one of the largest diasporas of Somalis in the United States, and while the food is not exactly the same, many in the Somali community dine at the Ethiopian restaurant Enat Kitchen (pictured). Located in Northeast Portland, Enat is famous for its spongy injera bread and berbere-spiced “lamb key wot.” This place also serves alcohol, which may or may not be a turnoff for more strict Muslims.

Though no longer a restaurant, Horn of Africa can still be found at the Portland Saturday Market and various festivals, serving dishes from Somalia, Djibouti and Ethiopia. The market closes at 5 p.m., which means you will have to order your iftar early. 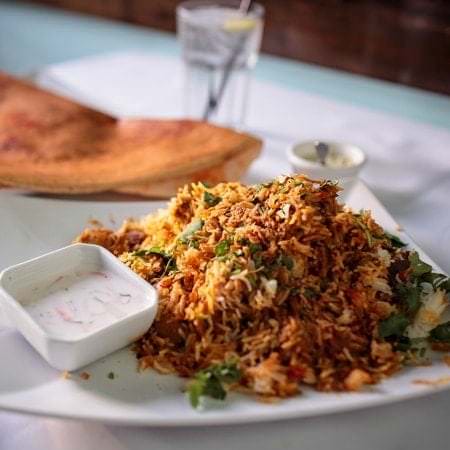 In Beaverton, Chaaya (pictured) specializes in biryani, a sort of South Asian paella that contains rice, saffron, and either lamb or chicken. Once you taste the dish, you’ll understand why there is such a fierce regional debate about which South Asian country makes the best biryani.

In Hillsboro, Biryani Corner is so serious about their biryani that they put it in their name. They are also open later on weekends and have a full halal menu. 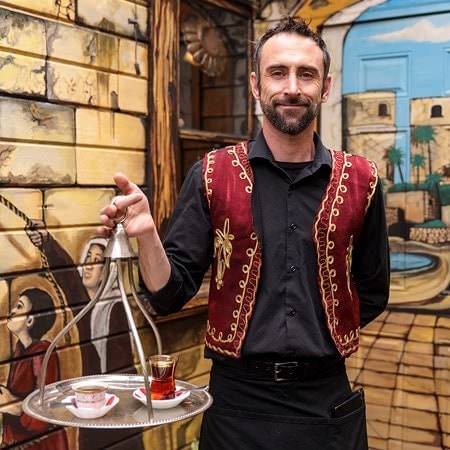 The Middle Eastern community is relatively small in Oregon, but you wouldn’t know it based on the number of Arab-run restaurants in the state. Here are a few standouts.

For Yemeni food, try Mandi House. There are a ton of great Lebanese options too, including Ya Hala, Hoda’s and Oasis. If you fancy belly dancers and sitting on cushions on the floor, Moroccan Marrakesh is for you. Although it closes at 8 p.m. (i.e., before iftar time) Hush Hush serves great vegan and gluten-free dishes, and its prices are very affordable. For Iraqi food, try DarSalam (pictured) at its downtown or Alberta locations in Portland. And in Salem, I am a big fan of Al Aqsa, which dishes up Palestinian food. 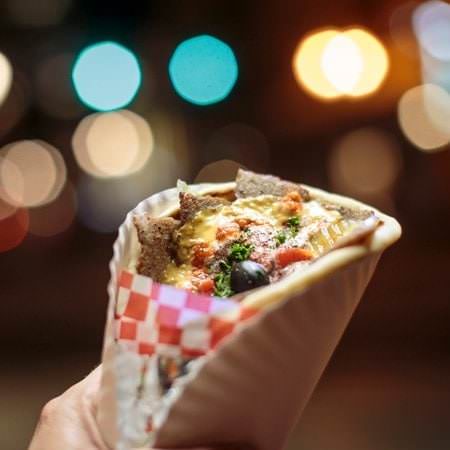 For my money, my favorite place to eat during Ramadan is at Portland’s various food carts, many of which are open extra late this month and on weekends throughout the year. In downtown, there is Abu Omar, Ishtar Gate, Gyro House and Noah Halal; and in Southeast, there is Tahrir Square. All of these carts serve a variation on the lamb and chicken shawarma sandwich. Their portions are massive, and each item is generally less than $10.

Is the food-cart food good? Sure, particularly the white sauce these shawarma stands put on their chicken, which I am sort of addicted to. But these places are really about the community that forms around them, and this is where I go, especially these days, when I am in search of smiling faces that look like me. 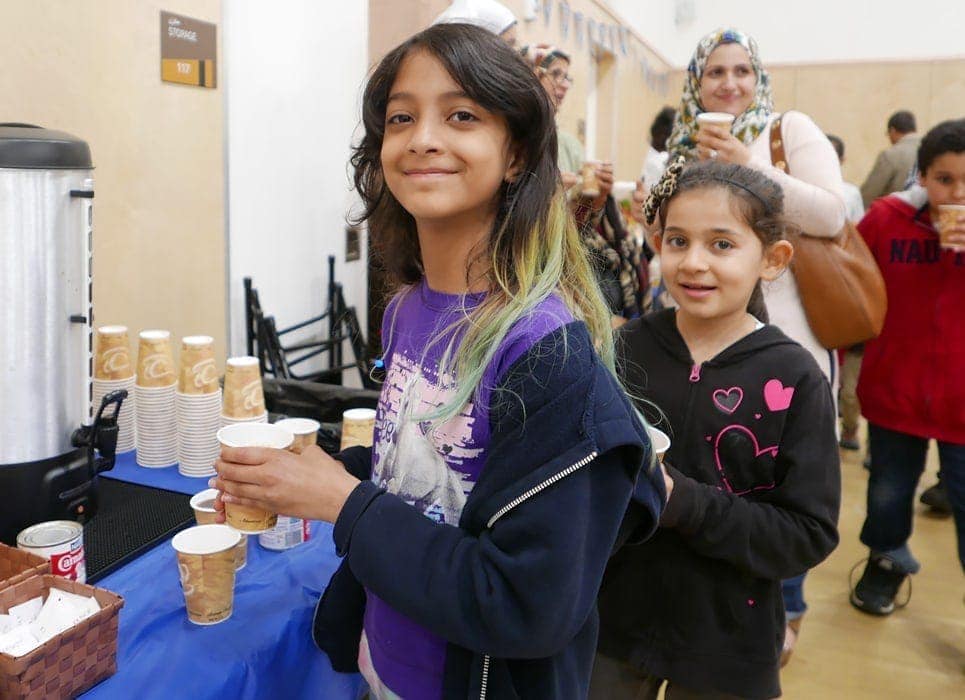 For many Ramadan is about going to the mosque for the breaking of the fast, known as the iftar. During the month, the Muslim Educational Trust (MET) in Tigard typically hosts community potlucks nearly every Saturday at sunset. At their iftars, it is common to rub shoulders with representatives from the mayor’s office as well as executives from Nike. It is also very welcoming to women, including those who do not wear the headscarf, as well as to children.

The Eugene Islamic Center is a cozy spot dominated by students and faculty at the University of Oregon in Eugene. The center is located in a small house, and they regularly post their Ramadan iftar and other events on their website.

For Persian-speaking Oregonians, as well as for those who adhere to Islam’s minority sect known as the Shia, the Islamic Center of Portland offers regular programs during Ramadan, including recitations of Persian poetry known as “nohas.” One of my favorite Ramadan treats is asheh reshteh, a green Iranian soup with noodles and red beans, which is occasionally served at this center.

Masjed As-Saber offers nightly iftars at their Southwest Portland location, and the mood there is decidedly more religious (and male), with prayers starting promptly after the breaking of the fast. While many of the attendants at MET are from Arab countries, Masjed As-Saber tends to be dominated more by South Asians, Afghans and East Africans. The food varies from South Asian-style chicken korma to Somali beef stew.

The Portland Rizwan Mosque caters to another sect of Muslims, the Ahmadiyyas, who are often neglected and, sadly, persecuted. Their center — which is friendly and progressive — has hosted events such as “Talk to a Muslim” programming during Ramadan, when you can learn more about Islam and Muslim culture.And of course, food is served.

Tips for Non-Muslim Visitors: As with visiting any other religious or cultural event, your hosts will greatly appreciate the respect you show for their beliefs and customs. If you attend a potluck at a mosque or Muslim community center, please avoid bringing alcohol or food that contains pork. Because of Muslim dietary laws, all beef, chicken or lamb also needs to be “halal.” Seafood items do not have to be halal. My advice is to bring something vegetarian or, even better, a cheese pizza — Muslim kids will love you for that. Dinner is typically eaten “family style,” with everyone sitting on the floor.
As for what to wear, the Muslim Educational Trust is relaxed about their dress code, but other places tend to be a bit more conservative. It is best for men to wear pants and for women to wear long-sleeve shirts and a scarf (in case you are asked to cover your hair). Most Muslim places of worship will ask you to remove your shoes before entering.

Zahir Janmohamed
Zahir Janmohamed is the host of The Racist Sandwich, a podcast about food and race, and an adjunct fellow at The Attic Institute in Portland, where he teaches nonfiction writing. He has written for The New York Times, Newsweek, The Guardian, The Nation, Oregon Humanities and many other outlets. He previously worked in the U.S. Congress and at Amnesty International.