Burnout is real, OK? Thankfully, I’ve found an antidote. When the buzz of emails and the pings of calendar notifications make my brain feel fried, I take a road trip through the foggy forests for a  retreat to the Oregon Coast. It’s the best spot I can think of to recharge my creative batteries — where I find new ideas in the astonishing landscapes and in the wealth of art they inspire.

On a recent sunny weekend, I was in need of a break from deadline pressure and writer’s block; with a day job as a digital-media editor and a calling as a memoir writer, I deal with my fair share of both. That’s why I decided to take a road trip for some salty ocean air and a few quiet days of sightseeing the public art that crops up on almost every street corner in coastal towns. There’s a palpable sense of artistry that springs out of galleries and makes many of these communities feel like open-air museums. In fact, nearly 200 official works of art are publically accessible along the Coast — what’s being dubbed the Oregon Coast Public Art Trail — including handmade sculptures on the sidewalks, historic murals on walls and other unique creations that offer a taste of the arts scene thriving here.

My camper van makes impromptu road trips like this easy. I bought the 1986 GMC Vandura two years ago and have since made dozens of weekend getaways to the Coast. There’s a bed in the back of the van, and some crafty friends helped me add a small pump sink where I can wash my face and brush my teeth before curling up with my piles of pillows and blankets. I’ve strung up white lights and loaded it with piles of books. I bring my dog, Jackson, who arguably loves the Coast even more than me. When we cuddle up under a thick blanket, it’s all I really need to feel at home on the road.

I’ve chosen to make a beeline to the Central Coast, my favorite stretch of these shores. I begin by cutting a straight line down I-5 from Portland to Eugene, then crossing over to Florence. The towns I’ve chosen to explore each have their own history and culture around the arts, shaped by the particular curve of land and swells of water, and the people who live and make art there, too.

The stop for me and Jackson is Florence on a bright day, where hydrangeas and lilies spill into the sidewalk, painting the town in color. In view of the ornate Siuslaw River Bridge, an art deco marvel built in 1936, the riverfront Old Town district is a hub of creativity. In addition to a cluster of galleries and independent shops, Old Town also contains a variety of public art, largely due to the efforts of the all-volunteer Public Arts Committee — an example of the collaborative spirit that exemplifies the arts scene here.

You should, of course, try to time your visit to the monthly Second Saturday Gallery Tour, when many galleries open their doors for new exhibits and special events. But you can take a self-guided stroll through the city anytime with the official Passport to the Arts, which pinpoints galleries and public art. The passport is available at any of the participating galleries.

A series of sea lion sculptures stands out as one of the most popular public art displays in Florence’s history. Jackson spots one on the Old Town boardwalk, making his brown and white fur stand on end. 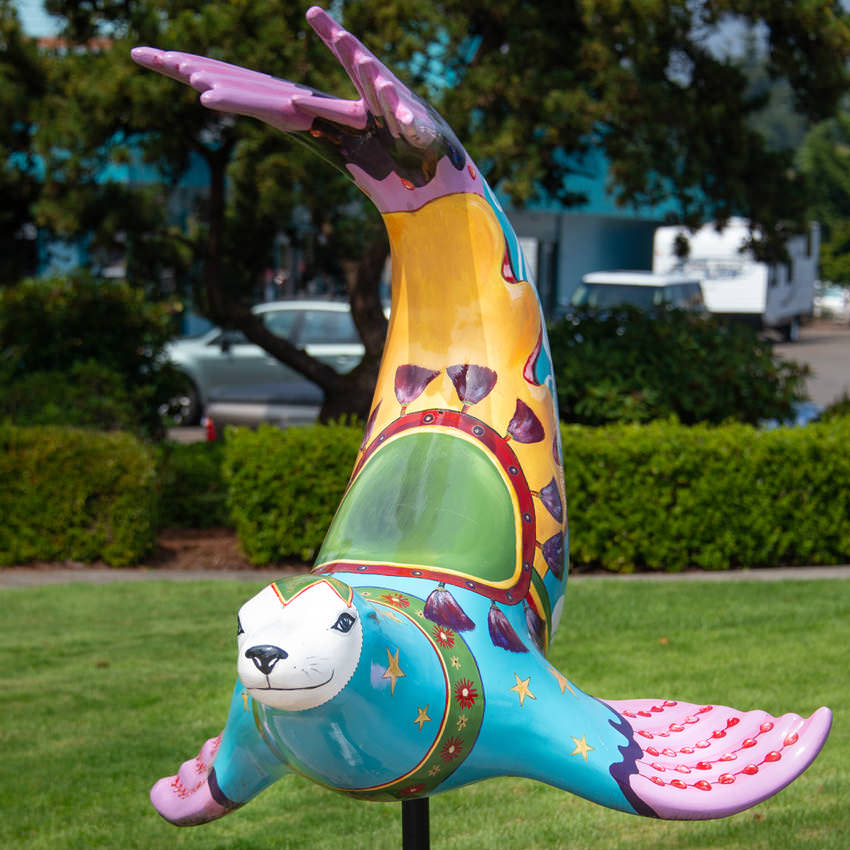 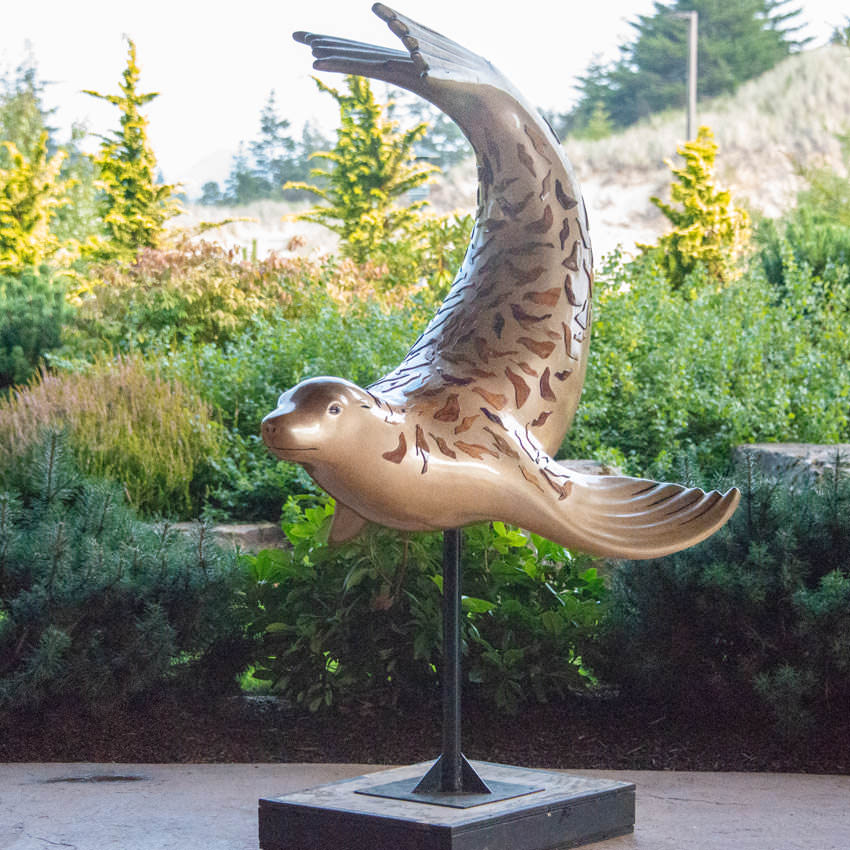 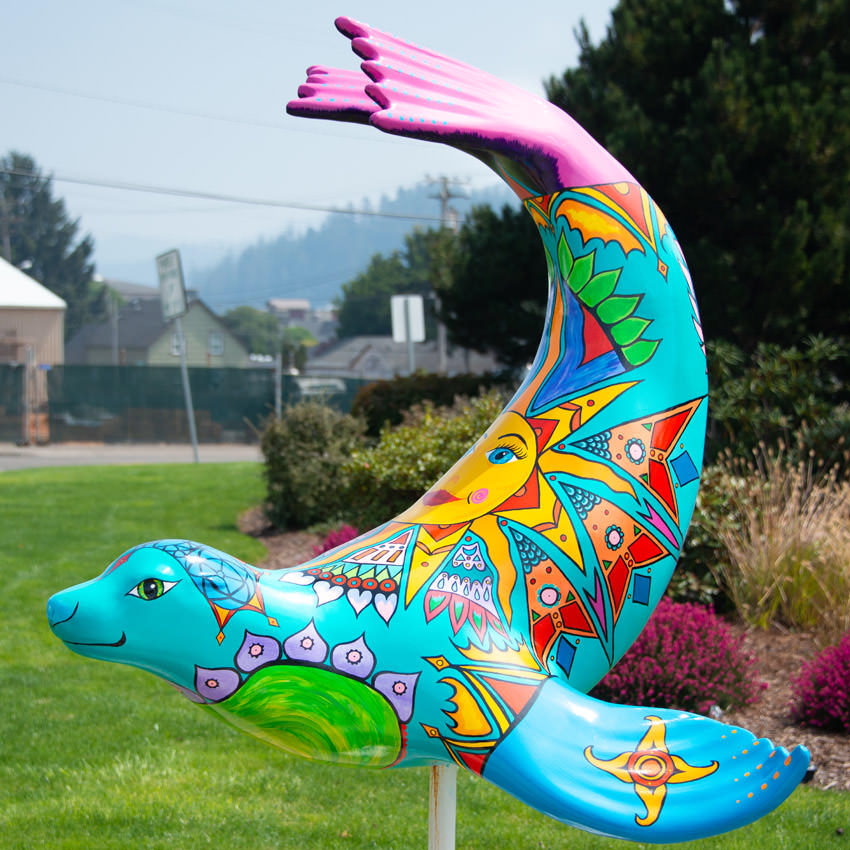 The creature is painted in white clouds and a sea of swirling blue, which, in that moment, match the colors of the sky. This particular sea lion — titled “Umi No Nami,” which means “sea of waves” in Japanese — was painted by artist Ellen Huntingdon. It’s one of 21 sea-lion sculptures that make up “Dancing With Sea Lions,” a collaborative public art project in which 21 artists were given the sculptures to paint as they saw fit. They were all first displayed here in Florence, then auctioned off in 2016, finding homes elsewhere along the Coast. Most of the sea lions are still displayed as public art here in Florence as well as in Yachats and Waldport.

After a stroll around town, we pop into some of the galleries featured on the passport. One highlight is the Florence Regional Arts Alliance, a local institution that draws both lifelong artists and new hobbyists to explore, dabble and celebrate all levels of work. As I arrive, a class is underway. I watch as 10 students create similar paintings based on a photo of crashing waves that’s projected on a screen in front of them. I gaze quietly from the back of the room, glancing at the finished works from local artists displayed on the walls.

After admiring the art class, Jackson and I jump back in the van, heading north toward Yachats, another creative town near where we’ll be setting up camp for the night.

Halfway between Florence and the village of Yachats, Highway 101 makes a sharp turn where it looks like a chunk of earth has fallen into the ocean. Fir trees rise up on the right, and an unmarked road cuts through them. I make this turn and find my favorite campground at the end.

This is Horse Creek Campground, which is home for the night to a handful of other campers, most with camping trailers and horses. I park the van in a cozy clearing, surrounded by thick underbrush and mossy trunks. Above us, I watch speckles of the bright-blue tree-crowded sky turn dark. This is my favorite spot on the Coast, and I return to stay the night in this same campsite often. I love waking up to the sparkling dew just outside the van.

The next morning, I head into town to grab coffee at my favorite quirky cafe, Green Salmon Coffee Company, and an early lunch at Yachats Brewing + Farm Store. At both spots, you can spot local art while you sip your coffee or beer (on the walls, in the bathrooms), and then run into more on the streets.

A tour of Yachat’s art includes galleries as well as a range of public art scattered around the village, ranging from abstract sculptures planted in front of the Earthworks Gallery to a curious metal whale sculpture that appears to be swimming beneath the surface of a small park — it even blows its spout every few minutes. One of the most recent additions to the city’s street-art scene is a part of the statewide Oregon Mural Trail. This magical mural depicts a fantastical scene of ships in clouds swimming past Heceta Head Lighthouse.

After exploring art in the center of Yachats, I lace up hiking boots and head to the south side of town to hike Amanda’s Trail, where you’ll witness one of the most moving statues anywhere on the Oregon Coast after walking for about 1 mile. (Pick up a trail map at the Yachats Visitors Center.)

I find the statue standing in a grotto, scattered with offerings like strings of shells, beads and feathers from passing hikers. A marker by the sculpture tells Amanda’s story. Amanda’s Trail was established in remembrance and recognition of Amanda De-Cuys, a Native American woman who was forcibly removed from a home she’d made with her daughter and husband in Coos Bay. In 1864 the blind, elderly De-Cuys was forced to march 80 miles over rocky terrain to an internment camp in Yachats.

It’s a sobering but necessary reminder that this land was taken from its original inhabitants — that the sparkling forests I so dearly love were stolen from those who loved them first. The statue of De-Cuys shows the power art has not only to inspire us but to remind us of our history so that we’re compelled not to repeat it.

As my weekend comes to a close, I decide to spend my final day cruising leisurely north along Highway 101. After packing up camp in Yachats, which really just means loading my camping chair back in the van, Jackson and I make our way to Newport, where you don’t have to look too hard to find art.

A buzzing coastal city set on the shores of the Yaquina Bay, Newport has a happening arts-and-culture scene, with two major municipal venues — the Newport Performing Arts Center and the Newport Visual Arts Center — plus galleries, studios and performance spaces. If you want to get your finger on the pulse of what’s happening in the city, the Visual Arts Center is the perfect place to start. Divided into three galleries that display regional and national artists, it’s the largest visual-arts facility on the entire Oregon Coast, and the helpful staff can introduce you to some of the other arts locations around town. It’s located near the Nye Beach Turnaround and has great views of the ocean, too.

A clear highlight of any visit to Newport is the massive murals along the historic bayfront, where you’ll also find galleries and quirky shops. There are nearly two dozen murals in the city, many of them painted by the artist Rick Chambers. In one of my favorite mural scenes, two gray whales float above parked cars, and a fisherman looks gravely across the ocean as he paddles a rowboat into choppy waters.

Just as the murals pave the way to discovering galleries and shops full of artfully crafted goods, they also set the scene for the fishing industry, which permeates the air here. The salty wind and rain has chipped away at the murals’ paint over the years, but the weathered scenes add to the dreamy quality of this place while reflecting the maritime history, industry and nature that makes Oregon’s Central Coast unique.

After snapping a few photos of the street art and bouncing between the bayfront galleries, I head toward the docks. Jackson’s ears perk up as we hear sea lions barking at the sky. We listen to their noisy song for a few moments before I go in search of a quiet corner to enjoy clam chowder with a view of the water. I’m unsure of my next stop, but for now I’m content to wander.

If You Go: Want to plan your own art-focused tour of the Oregon Coast? The three cities featured here are just a start. Dozens of towns and cities along the Oregon Coast are home to an eclectic range of artists and art-focused venues, from Astoria and Cannon Beach on the North Coast all the way to Port Orford and Bandon on the South Coast. The art scenes in each of these cities vary from contemporary fine art to homespun and quirky. Organizations such as the Oregon Coast Council for the Arts, based in Newport, are helpful resources when searching for arts-related events. And both visitors centers and local galleries can help point you in the direction, whether you’re curious about fascinating public art or want information about classes and events.

Britany Robinson
Britany Robinson is a freelance writer in Portland. Road trips are her preferred mode of research, as she collects stories about people and places for publications including BBC Travel, GOOD, Curbed and more.