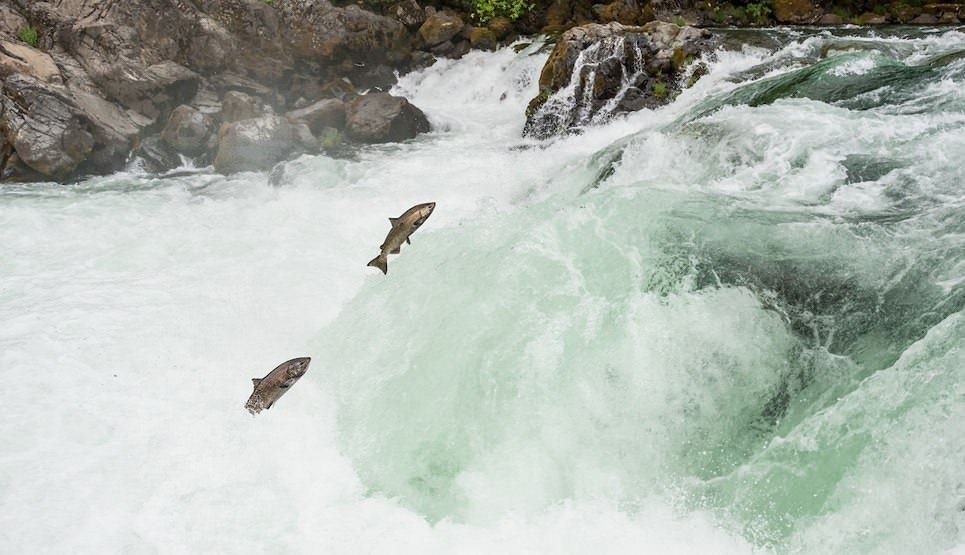 They go by many names: King. Blackmouth. Tyee. Tule. Oncorhynchus tshawytscha. They can weigh over 100 pounds and measure 5 feet in length (though fish of 15 to 30 pounds are more common). And they’re the largest of the five species of Pacific salmon. They are, of course, chinook salmon.

You’ll find them in most of Oregon’s rivers that have pathways to the Pacific Ocean, from the Chetco near the California border to the Grande Ronde in Oregon’s northeast corner. Anglers flock here for the chance to feel the chinook’s powerful pull, fueling local economies in the process. Others hike to their spawning grounds for a chance to see them complete their amazing life cycle.

But how much do you really know about Oregon’s official state fish?

Did you know chinook travel thousands of miles from their home rivers to their feeding grounds in the Pacific and back? Or that they’ve been an important food source for Oregon’s native peoples for as long as historical records have been kept? 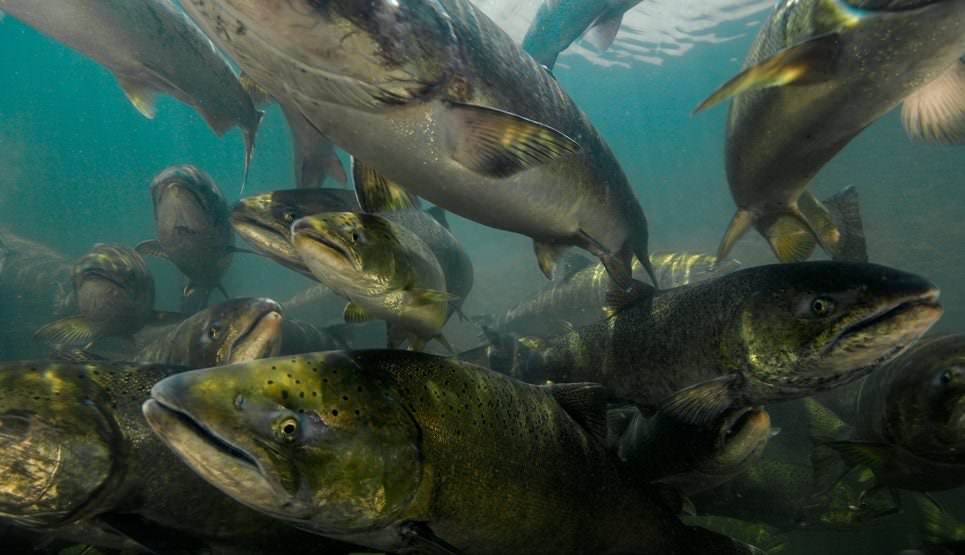 (Chinook in the Rogue River by Mark Conlin/Alamy Stock)

The Circle of Life

It’s believed that chinook, as we know them today, began appearing in the rivers of the Pacific Northwest 7 to 10 million years ago. For at least 13,000 years, native tribes — including Wasco-Wishram, Yakama, Umatilla and Warm Springs — have been drawn to the Columbia River to harvest chinook. There’s little doubt that these people (and the many indigenous peoples along the Oregon Coast) were as awestruck at the chinook’s incredible life cycle as they were thankful for the life-sustaining flesh the salmon delivered from the sea.

And their life cycle is incredible. Tiny salmon fry emerge from eggs three to five months after they are deposited by a female (and fertilized by a male) in a nest of rocks (called a redd) in their natal stream. The fish will spend the next 12 to 18 months in that stream, feeding on insects and crustaceans as they morph into parr (a small fish that begins to resemble a salmon) and then smolt (which might be mistaken for silvery trout). At this point, they depart the stream of their birth and head toward the Pacific, lingering in the estuaries (where the seagoing river meets the saltwater) to fatten up before heading north. Fish from different rivers — and in the case of the Columbia system, different sections of the river — go to somewhat different areas. Tracking data shows that Columbia fish feed in the waters off Southeast Alaska and British Columbia, 900 miles one way from the river’s mouth. 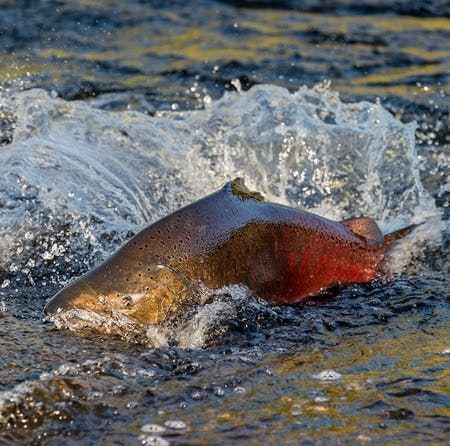 Chinook will spend anywhere from one to eight years at sea (though three to four years is most common) feeding on smaller fish. Here they take on their striking coloration: blue-green back, silver flanks, augmented with small black spots on the lobes of their tails. When the spawning instinct comes upon them, the salmon begin their long swim back to the stream where they were born.

Scientists believe that magnetic detection, imprinted on the fish at birth, helps guide them back to the correct river (with a little help from their sense of smell). As they enter fresh water, chinook’s bodies change; blues and silvers give way to darker hues, sometimes bright red. Males develop canine-like teeth and a hook-like jaw, called a kype. When the salmon reach their spawning ground, the female will dig a small indentation in the river’s gravel (the redd) with her tail and deposit her eggs. Males will compete to fertilize the eggs with their milt.

Chinook, like other Pacific salmon, expire within several weeks of spawning. After their death, chinook continue fostering the environment, a form of nutrient recycling. “The decomposing carcass provides nutrients for instream invertebrates,” says Dan Nehler, who works for the Pacific region of the U.S. Fish & Wildlife Service (USDFW), “which in turn feed small fish and other aquatic creatures..”

Oregon’s rivers receive several different runs of chinook. Some waters see only a fall return, others only a spring. The Columbia sees chinook returning in the spring, summer and fall.

There are a number of spots around Oregon where you can view spawning chinook, including the Sandy River in Oxbow Park in Gresham. To see chinook en route to their natal streams, it’s hard to beat the viewing station at Bonneville Lock and Dam. 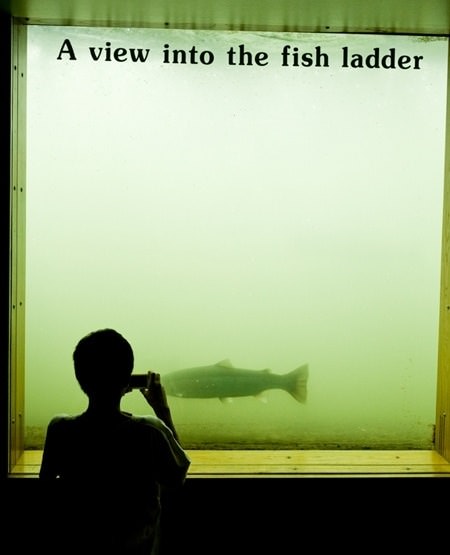 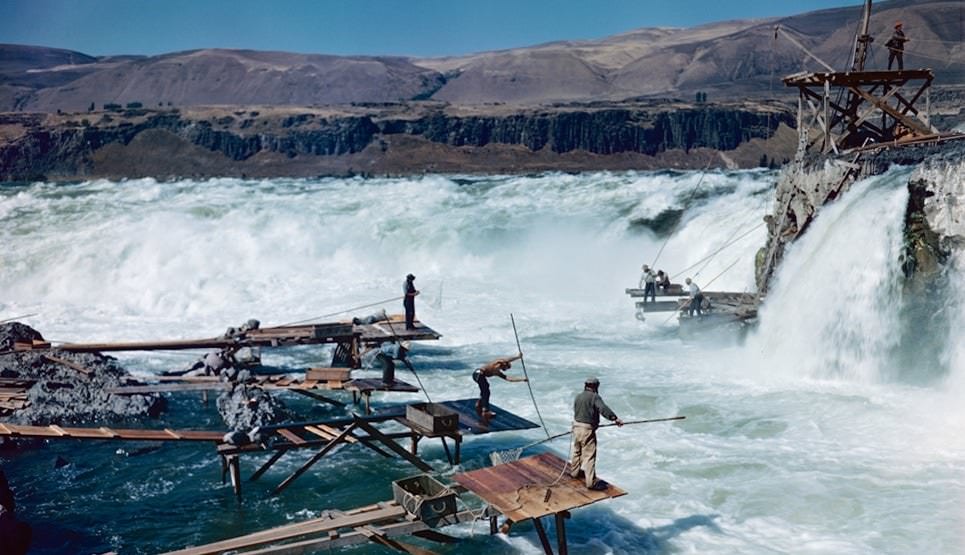 One cannot overemphasize the importance of chinook salmon to Native Americans. Beyond physical sustenance, salmon are central to many tribes’ spiritual traditions, and the fish’s annual return is tightly integrated into their culture. Antone Minthorn, who has served as general council chairman of the Confederated Tribes of the Umatilla Indian Reservation, has spoken of the relevance of the first salmon ceremony (commemorating the chinook’s return) to indigenous peoples:

“The importance of the first salmon ceremony has to do with the celebration of life, of the salmon as subsistence, meaning that the Indians depend upon the salmon for their living. And the annual celebration is just that — it’s an appreciation that the salmon are coming back. It is again the natural law; the cycle of life. It’s the way things are, and if there was no water, there would be no salmon, there would be no cycle, no food. And the Indian people respect it accordingly.” 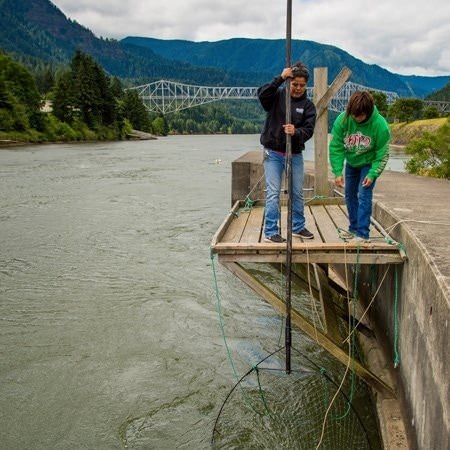 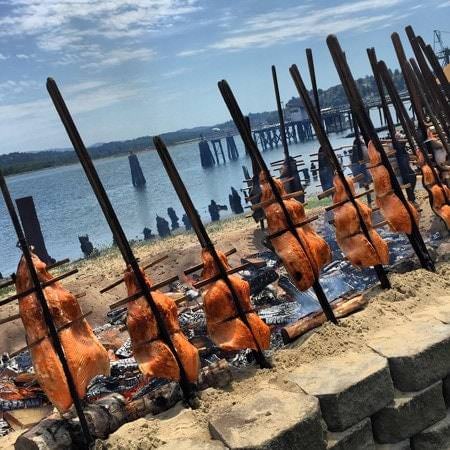 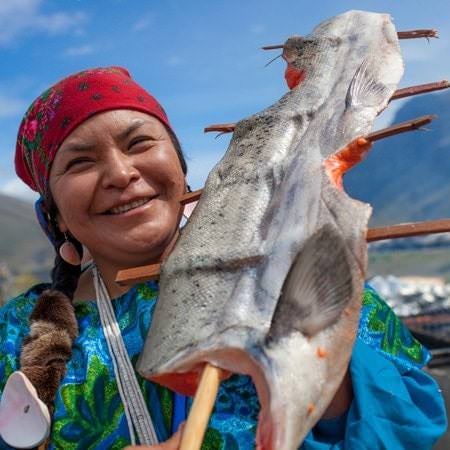 In the late 19th century, cannery records and tribal accounts suggest that 10 to 16 million salmon (a majority being chinook) returned to the Columbia River alone. Current Columbia runs are greatly diminished, with less than 2 million chinook returning in recent years.

“There are a number of issues impacting salmon returns,” says Sara Thompson, a spokesperson for the Columbia River Inter-Tribal Fish Commission. “Water quality is one of the biggest; though, because it’s not as tangible as something like a dam, it’s not largely talked about. PCBs, mercury and toxics make their way into the rivers and into the fish. The tribes are taking what we call a gravel-to-gravel approach to address those challenges, undertaking restoration projects at every point in the salmon’s life cycle — from improving habitat in spawning tributaries to enhancing fish passage.”

You can witness tribal members fishing for chinook with hoop nets at Cascade Locks on the Columbia and at Sherars Falls on the Deschutes, among other spots. You can even partake of a traditional salmon feast at salmon bakes held in the chinook’s range, like the Mill-Luck Salmon Celebration hosted by the Coquille tribe and held in North Bend in late summer. 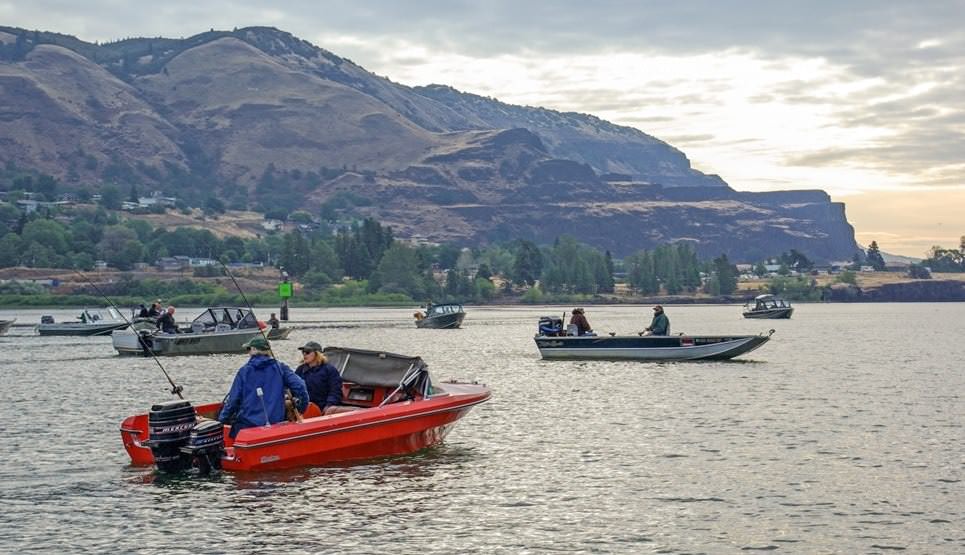 From Hook to Table

Sport anglers travel to Oregon from far and wide for a chance to tussle with chinook. Fishers ply the Rogue, Umpqua, Wilson, Willamette, Columbia and countless smaller rivers and tributaries.

“Chinook are a great fighting fish,” says Tucker Jones, ocean salmon and Columbia River program manager for the Oregon Department of Fish & Wildlife. “There’s a reason they’re an icon.” Perhaps the most focused chinook fishery occurs in late summer at Buoy 10 in the Columbia. “It can look like a flotilla out there to people watching from shore,” Jones continues. “I think of it as controlled chaos.”

In the fall of 2016, the Columbia saw days with around 230,000 anglers on the water and more than 57,000 chinook landed. (The Oregon state record chinook is 83 pounds, landed on the Umpqua by angler Ernie St. Clair in 1910.) The 2017 all-salmon season begins on June 24 around the state, though no fishing will be allowed this year in Gold Beach and Brookings to protect chinook. Find more information about fishing seasons and regulations here.

If chinook are a thrill to fight on rod and reel, they may be even more revered as table fare. (But please don’t tell the fish how delicious they are — let them live in blissful ignorance!) Spring-run fish are especially prized by gourmands for their abundant fat reserves, which the fish need to make the long upstream voyage to their spawning grounds. 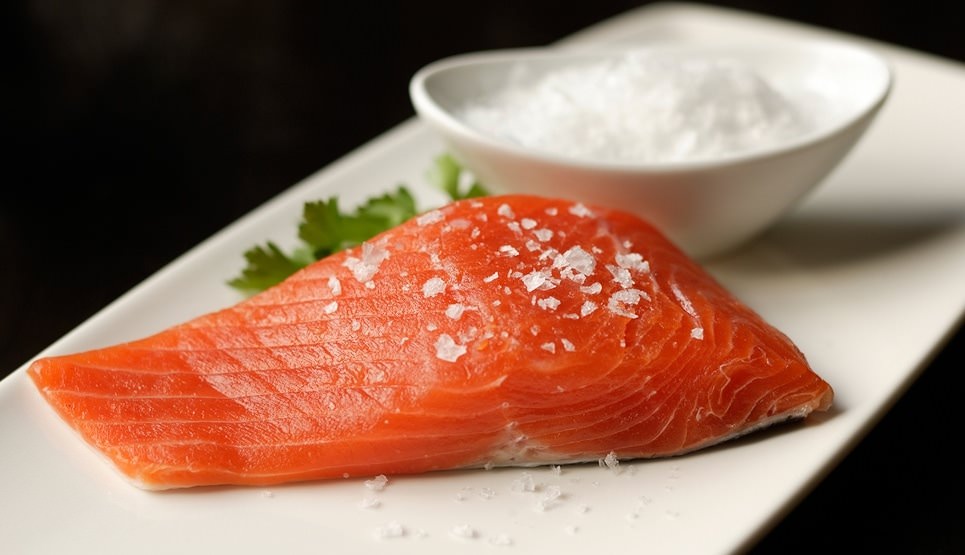 (Salmon with Jacobsen Salt by JohnValls)

“With the thickness and glorious texture of a chinook salmon fillet, I recommend keeping the preparations simple rather than fussy,” offers Diane Morgan, the James Beard Award-winning author of “Roots” and two cookbooks on salmon. “This lets the quality of the flesh shine through. For me, grill-roasting chinook on an alder plank or placing it on a sizzling-hot griddle with a light rub of olive oil and a sprinkling of sea salt and pepper is all that is needed.”

Chinook salmon are a key thread in Oregon’s ecological tapestry, a significant ingredient for human sustenance and a source of sporting pleasure. They are also inextricably tied to the Oregon psyche.

“Most Pacific Northwest residents hold a strong belief in the intrinsic beauty of rivers and forests, and they foster a deep personal connection to pristine waterways and the silver, green and red forms of wild salmon swimming upstream,” says Guido Rahr, president and CEO of Portland-based Wild Salmon Center, an international organization dedicated to the conservation and sustainable use of wild salmon and their ecosystems across the Pacific Rim. “They are part of us and worth saving,” he says.

Nehler at the USDFW strikes a similar chord. “I’ve worked in other places around the country for the Fish & Wildlife Service, and people in those places often know little about the fish and animals that live there,” he says. “In Oregon you drive around and see symbols of the salmon we’re trying to protect. Oregonians are plugged in about salmon and their importance. As a fisheries biologist, it makes me feel good about what I’m doing.” 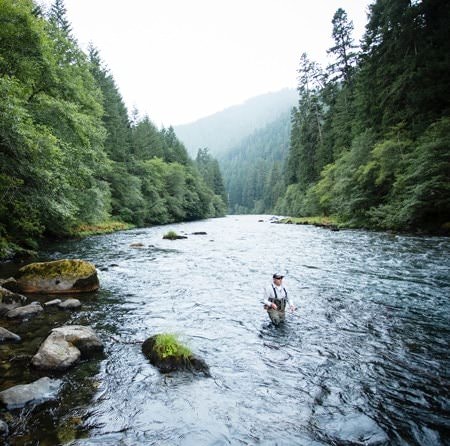 Chris Santella
Chris Santella is a freelance writer and marketing consultant based in Portland. He is the author of 23 books, including the "Fifty Places" series from Abrams Books. The most recent title in the series is Fifty Places To Practice Yoga Before You Die. Santella is a regular contributor to The New York Times, The Washington Post and Trout. When he’s not writing or fly fishing, he plays guitar and sings in Catch & Release.