Eagle Watch in The Dalles

This winter, there’s a gathering of eagles in the Columbia River Gorge. It’s a thrill to see all the big birds at one place.

Soaring on thermal updrafts, the eagles’ size and white capped heads give them away. Bald eagles are on the hunt at a place that may surprise you, according to Amber Tilton, US Army Corps of Engineers Park Ranger at The Dalles Dam.

“Our highest count this year at The Dalles Dam has been 60-plus bald eagles in this area — they use the trees as a night roost,” said Tilton.

Bald eagles began showing up in ever bigger numbers each year, beginning seven years ago.

Tilton said the birds chose a wooded stand just across from Seufert Park for good reasons: “They need food and they need shelter in the winter. We have plenty of open water on the Columbia River, so it’s prime hunting ground for the eagles who will target waterfowl and fish. It’s also secluded and quiet so they’re not interrupted by human activity — it’s the perfect spot!”

The Dalles Dam eagles show up in late December and will be here until early March when they head back north to their nesting areas as far away as Alaska.

A spotting scope or binoculars will help you see the show before you make a short drive to another site with even better eagle views.

Since 1997, the nearby Columbia Gorge Discovery Center has been the official interpretive setting for the Columbia River Gorge National Scenic Area.

“The awesome entrance will captivate you and leave you wanting to learn more,” said the center’s executive director, Carolyn Purcell.

“We show and tell all about the early geology of the region, the ice ages when there were Columbian mammoths living here at the same time as people were here. Our five acres has been restored with native vegetation, so it helps people visualize what the Gorge looked like when the pioneers came through here.”

The Discovery Center is home to important stories that link us to Oregon’s rich natural and cultural histories including the region’s native wildlife — like raptor species.

Bambi Foy is the center’s Raptor Educator and loves to show off the varied species that are a part of the Raptor Program.

“We have a male and female bald eagle — one was a shooting victim and the other was found with gangrene infection,” said Foy. “We don’t know what happened, but both eagles required partial amputations. So they can no longer fly and now serve as wildlife ambassadors.”

They are awesome to see so close and you can too during the center’s raptor programs that are held each Saturday and Sunday until late March, when the programs are expanded and held daily.

Not just bald eagles, but other raptors are available to see including a gorgeous red-tailed hawk and a Cooper’s hawk, notable for his beautiful red eyes. The slate blue color on an American kestrel male is also stunning; a falcon relative, the kestrel is smallest of all the raptors.

“A small bird — about the size of a robin,” said Foy. ”In the wild, the kestrel will take small rodents, bugs, slugs, beetles — same things bats might take!”

And then there’s the visitor’s favorite: an easy identification for kids and adults alike: the great horned owl.

“He has pretty amazing eyes,” said Foy. “If you compare their vision and their eyes with our eyes, our eyes would need to be the size of softballs or grapefruits.”

Foy added that 80 percent of raptors in the wild die before they reach the age of two, so the center’s varied species allow you a look at birds rarely seen so close.

“I’ve seen grown men cry when they hear the story of our eagle being shot, so when you see that you know you’ve changed somebody’s life,” added Foy. “It makes a difference and that is our goal. If our raptors can serve as ambassadors to our backyards, to the Gorge or to the greater Northwest then that’s pretty special. We’re honored to be a part of that.” 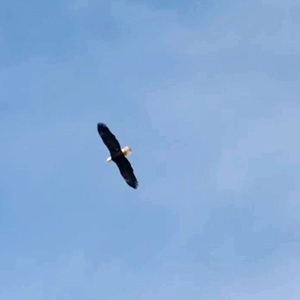 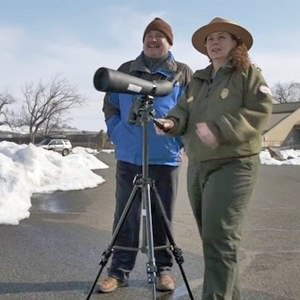 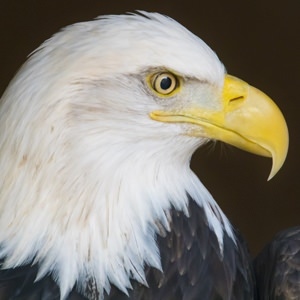 Grant McOmie
Grant McOmie is a Pacific Northwest broadcast journalist, teacher and author who writes and produces stories and special programs about the people, places, outdoor activities and environmental issues of the Pacific Northwest. A fifth generation Oregon native, Grant’s roots run deepest in the central Oregon region near Prineville and Redmond where his family continues to live.