EUG, also known as Mahlon Sweet Field, is owned and operated by the City of Eugene. It is the fifth-largest airport in the Pacific Northwest, providing commercial air service to a six-county region in mid-Oregon. 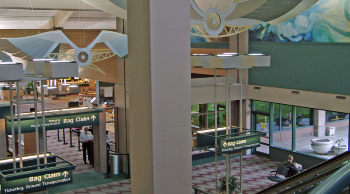 Eugene Airport (EUG) by Travel Lane County
Is any of the information on this page incorrect? Suggest an update
Ready to hit the road? Bring our travel magazine along.