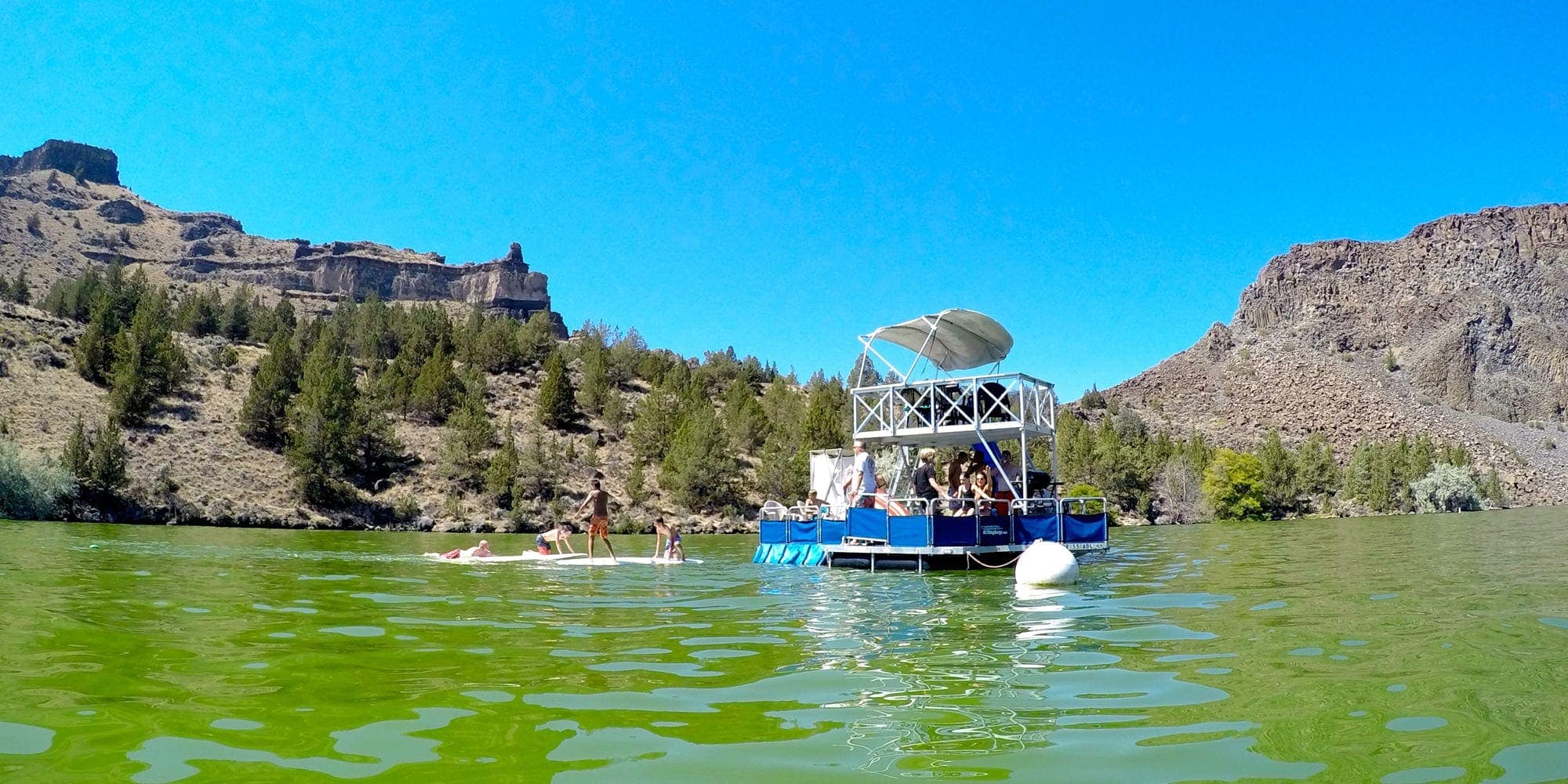 Yep, party barging!  I’m officially making it a verb.  My family and I recently spent the day with three other families — eight adults and eight kids in all — on the waters of Lake Billy Chinook in Central Oregon.

Named for a Wasco Indian scout who traveled with explorer John Fremont, Lake Billy Chinook is a man-made reservoir with 72 miles of shoreline. It covers 4,000 acres and is fed by three rivers: the Metolius, Deschutes and Crooked. The 200-foot canyon walls that surround the lake were formed by layers of stream sediments, volcanic debris and basaltic lava. While scenic and geologically significant, what’s even more important is that Lake Billy Chinook offers pure fun! 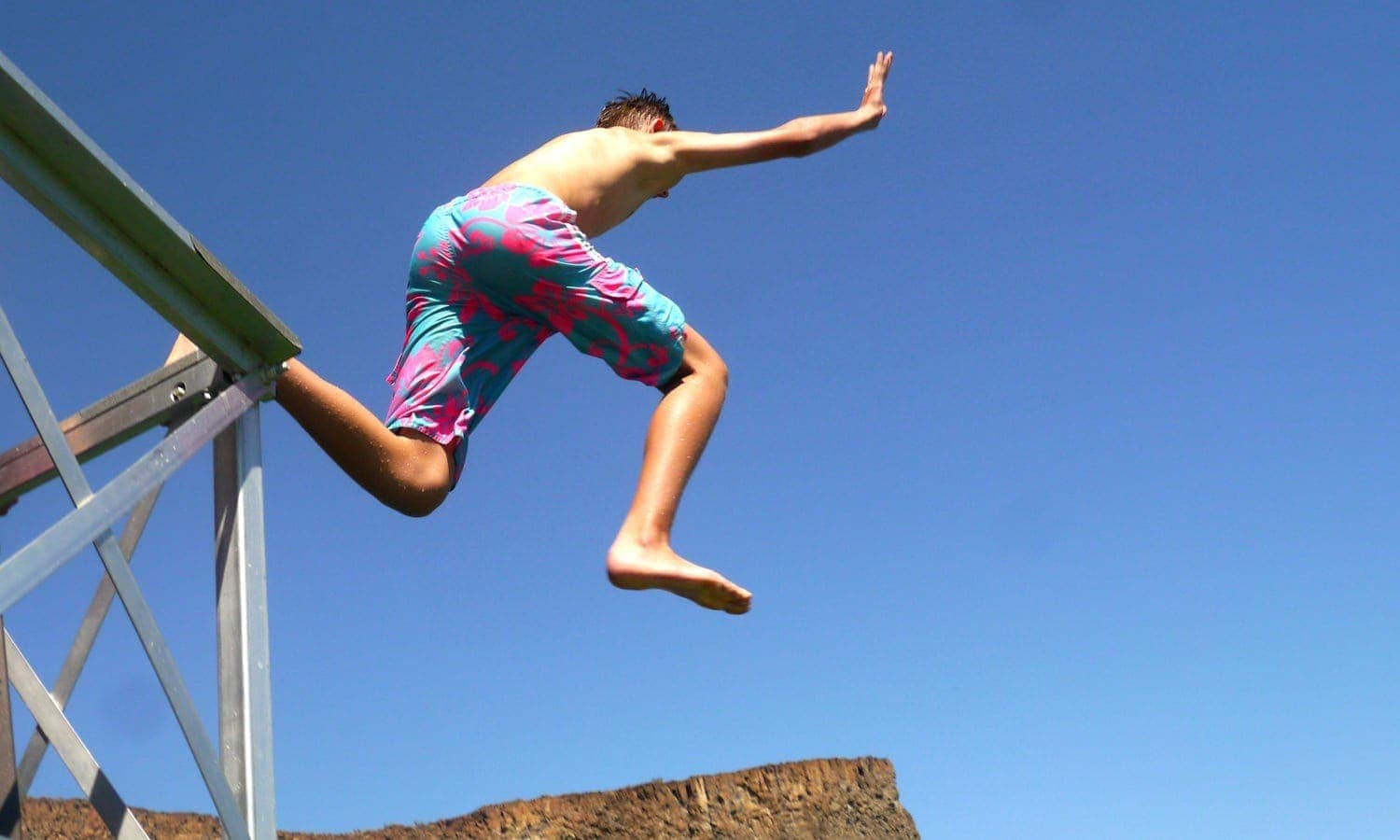 The Cove Palisades Resort and Marina rents much sought-after houseboats, plus motor boats and jet skis. But if you’re only able to visit the lake for a day — and especially if you’re visiting with multiple families, I recommend renting a party barge.

What is a party barge?  It’s double-decker floating platform equipped with a grill, slide, personal flotation devices and restroom (think portable toilet without the smell).  It has a small motor that allows you to drive the barge, albeit at a painstakingly slow pace.  But that’s okay, because party barges aren’t meant for cruising or sightseeing; they’re mean for fun. At a $375 to $525 per day, renting a party barge is a lot more affordable when you’re splitting the cost between friends. And it’s a lot cheaper than renting a houseboat.

To rent a party barge, you either need a boater’s license or you can simply get a free, temporary one by filling out a one-page form upon check-in. As long as there’s one licensed boater on board, any of the adults can drive. A staff member will then give you a brief orientation. Driving the barge is not difficult, though as I found, parking it after a day on the water is a bit more challenging. Once we left the dock, we headed to the nearest buoy designated for houseboats and barges. I recommend not wasting time or gas by driving too far from the marina; it’s not worth it.  The views are similar, and frankly, your kids will just want to get in the water! 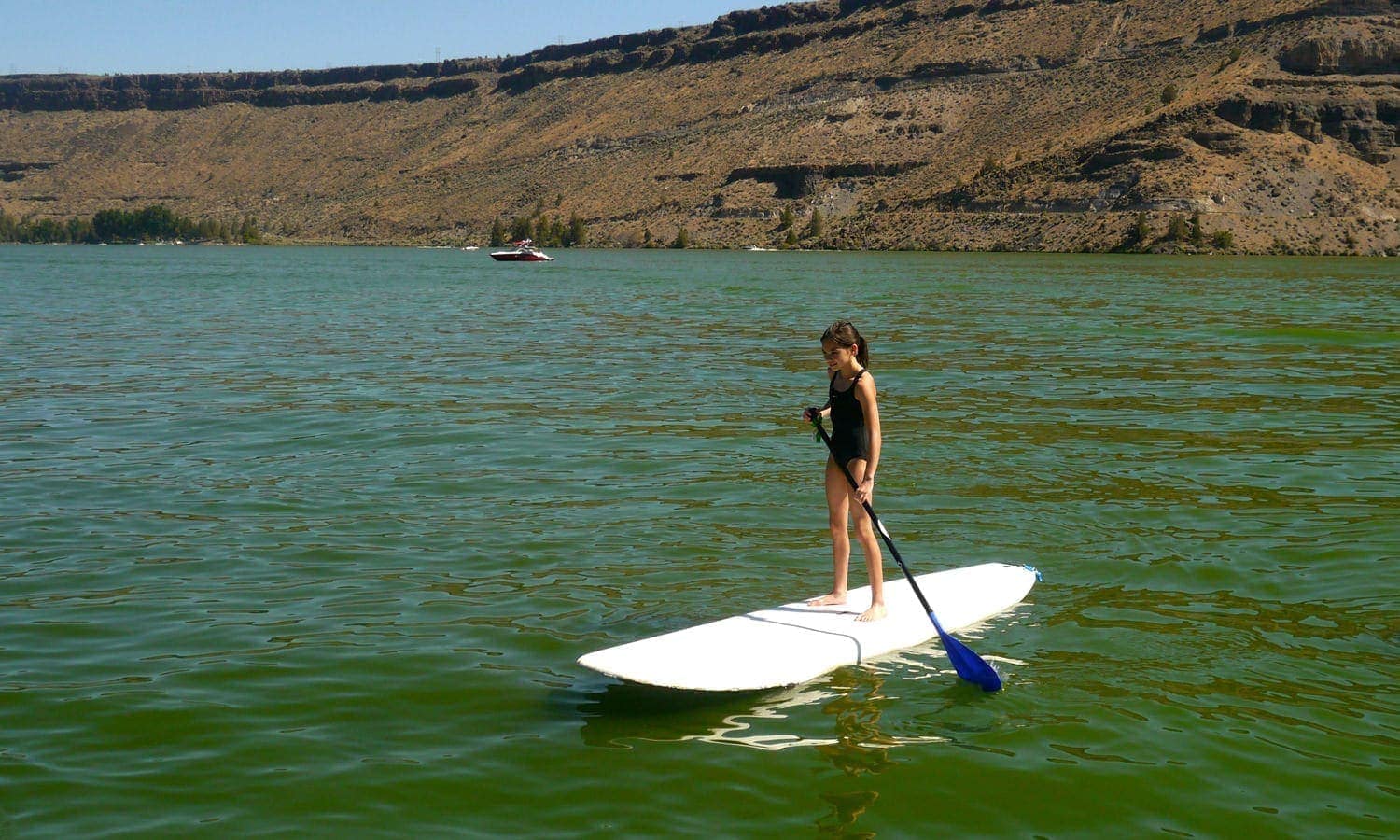 We rented the smallest barge, called the Prospector. Yes, it was pretty tight with four families, but most of the day, we had about half of our group in the water. The younger kids gravitated toward the slide, while the thrill-seeking teens and their daring parents jumped from the upper deck, over and over again. I was more than happy to take photos! We rented floats, tubes, stand-up paddleboards and kayaks from Cove Palisades Marina. On a hot, high desert day, you’ll find the waters of Lake Billy Chinook cool and refreshing. All and all, we spent about five hours in and on the water having a blast.

While we didn’t fish, the lake is well-known as a bull trout fishery. You’ll also find Kokanee and small and largemouth bass. The Crooked River and Deschutes arms of the lake are open to fishing year-round with an Oregon fishing license. The Metolius arm has a limited season, and you’re required to have both a state license and a tribal angling permit, as this area is part of the Warm Springs Indian Reservation. 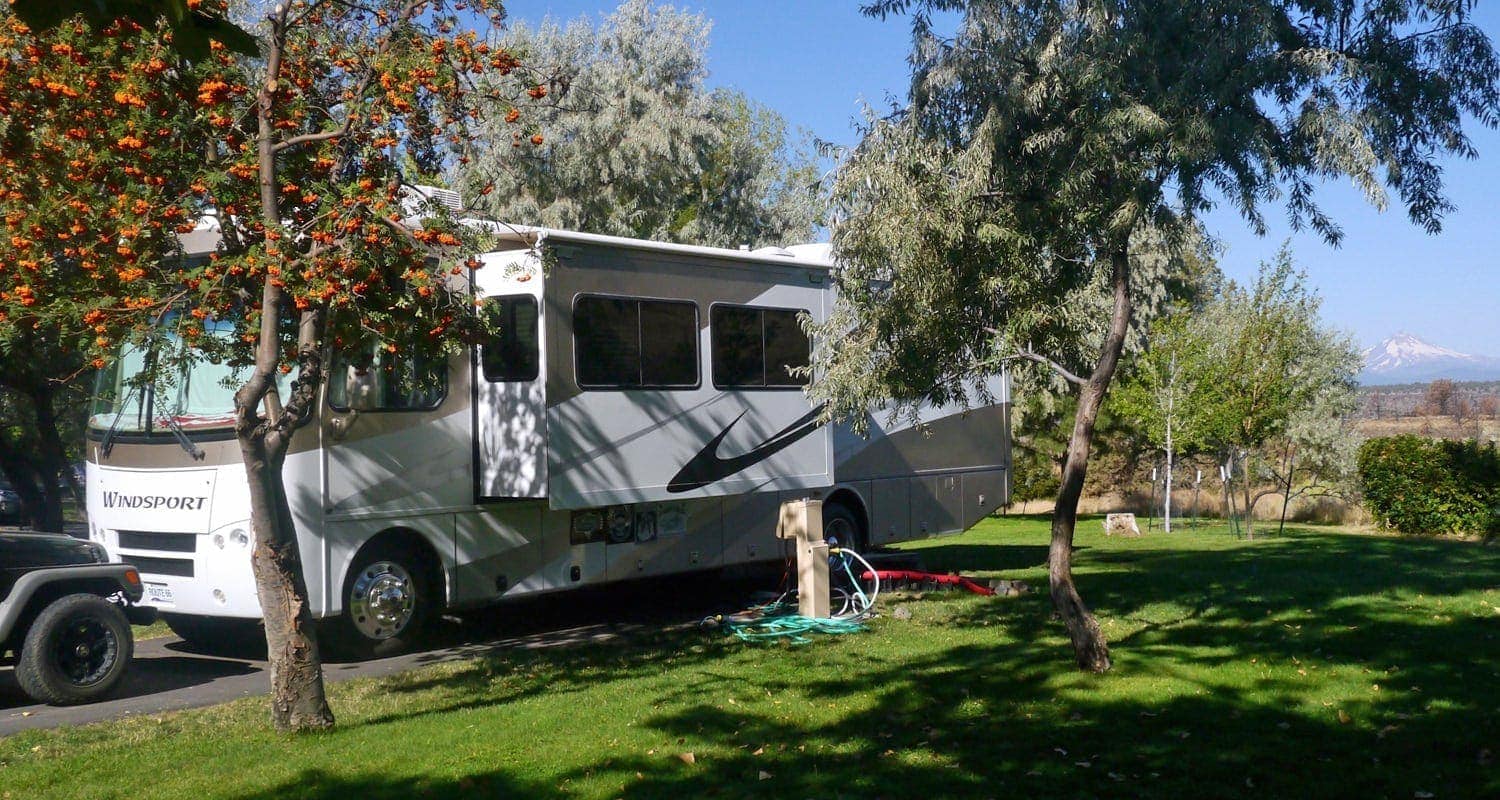 Cove Palisades State Park has two campgrounds: Crooked River Campground is on the southern end of the Crooked River arm of Lake Billy Chinook; Deschutes Campground is on the Deschutes River arm. Neither park has direct lake access; the campgrounds are perched above the lake, but there are day use areas reachable via car.  I’d recommending staying at Crooked River, as it’s closer to Cove Palisades Marine and Resort. However, it’s important to know that you can’t walk or bike from the campground to the marina; the road is very steep with no shoulder. If you’re driving an RV, the road is best-suited to rigs under 30 feet. There is a parking lot to accommodate over-sized vehicles at the marina.

Lake Billy Chinook is about 45 minutes north of Bend.

Shellie Bailey-Shah
Shellie Bailey-Shah is travel writer who has the distinction of having visited all seven continents, but she favors her home state of Oregon. She lives with her husband and sons in Portland and has logged thousands of miles behind the wheel of the family's RV.
Is any of the information on this page incorrect? Suggest an update
Ready to hit the road? Bring our travel magazine along.