It’s a summer evening on the shore of a high alpine Cascade lake in Central Oregon. The day is done, the sun has set, and it’s nearly dark. Thankfully, your kayaks are lashed atop the car. Now is the perfect time to put them in the water for a moonlight kayaking trip.

Kayaking on Central Oregon’s alpine lakes is inherently considered a daytime activity. The grandeur which unfolds around you with every paddle stroke and turn of your bow plays out best in full sunlight. But a unique Oregon adventure awaits those who resist the pull to be off the water before dark and instead strike out into the night awaiting the rise of a full moon.

Last summer we decided to put a spin on one of our favorite Central Oregon activities, kayaking. Instead of the familiar paddling in the light of mid-day, we were going to embark on an entirely new adventure for us: kayaking by moonlight on Hosmer Lake, high in the Cascades, west of Bend and Mt. Bachelor.

Unsure what to expect but anxious to get started, we loaded our two kayaks atop our car, tossed in our gear, including head lamps and light sticks, and hit the road a couple of hours before sunset. Driving from Bend up the Cascade Lakes Scenic Byway, we passed by Mt. Bachelor and headed south through alpine forests towards beautiful Hosmer Lake. Before we knew it, we were at the lake’s shore, putting our kayaks in the water just as the sun was getting low and the shadows were growing long. Ignoring that familiar tug to be heading home before it got too dark, we stepped in, sat down and pushed off from shore. 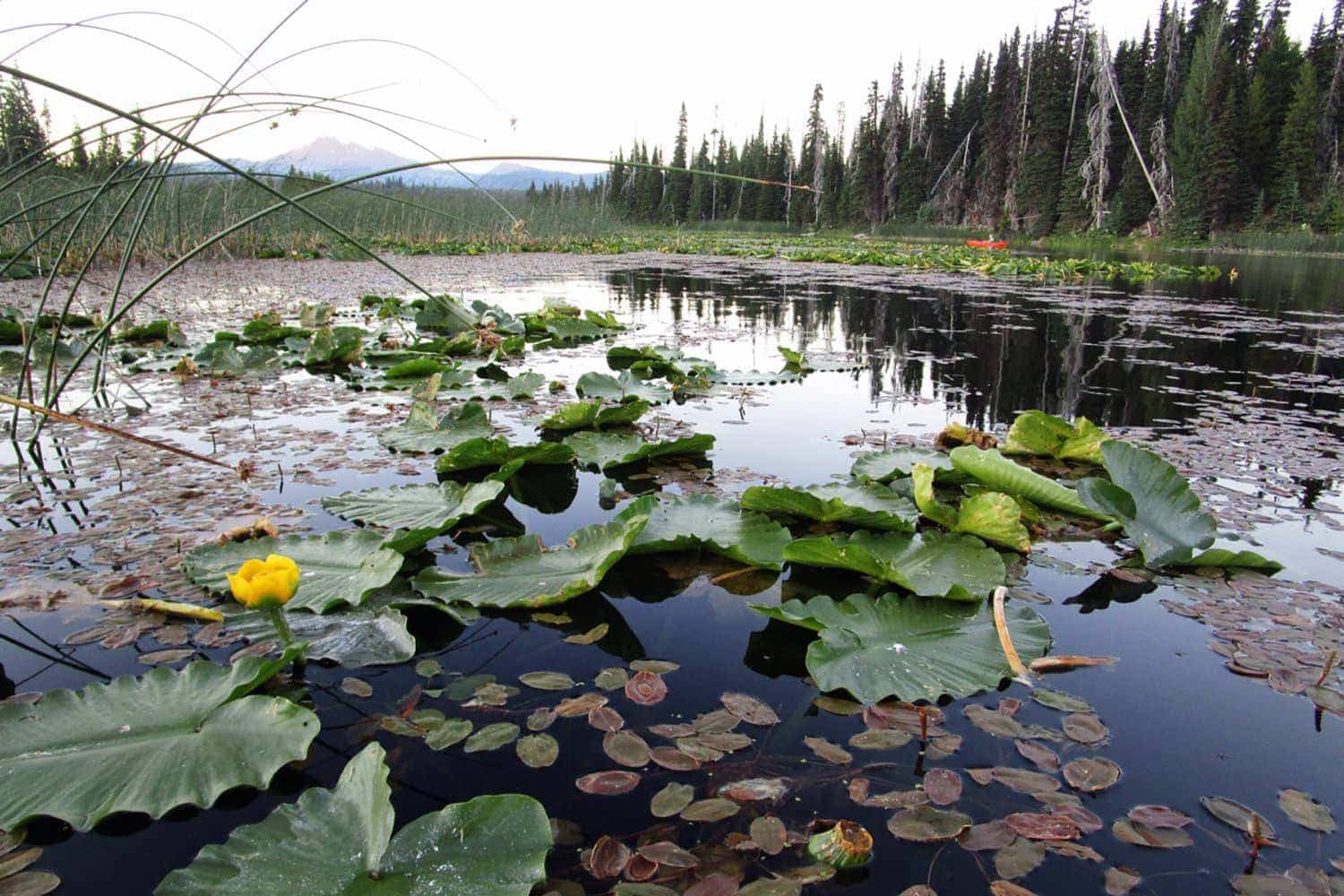 Silently paddling out into the long channel which leads between the two main bodies of the lake, we realized that as the day was ending an amazing event was beginning to unfold all around us. I had anticipated it would become quiet and still as the night approached — but it was to the contrary. With each passing minute, the thick and plentiful bulrush wands emerging high from the water on each side of us came to life with an abundance of restless bird life. Ducks, coots, yellow-headed blackbirds and what seemed to be a hundred other species of waterfowl restlessly flew in and about the wands in an avian cacophony of tweets, squawks, clicks and calls as they all settled into their resting place for the night.

On the water, ripples from brook and rainbow trout broke the mirror-like surface as fish began to take flies from the abundance of bugs that had now filled the air all around us. Thankfully, save for a mosquito or two, they left us alone, much to Kristy’s delight. Nearly dark out now, she was having the time of her life.

We were pleasantly surprised to find we weren’t the only ones on the lake. Wanderlust Tours of Bend had brought a group of folks in canoes, and there were perhaps a dozen or so additional kayakers on the water. Laughter could be heard from the distance now and again. With the full moon still not up yet, I was struck by just how dark it gets out on the water.

According to Oregon law, nighttime paddlers must show a white light toward oncoming traffic. We illuminated the front of our orange kayaks with our headlamps and placed our light sticks on the bows, where they emitted a soft green glow. 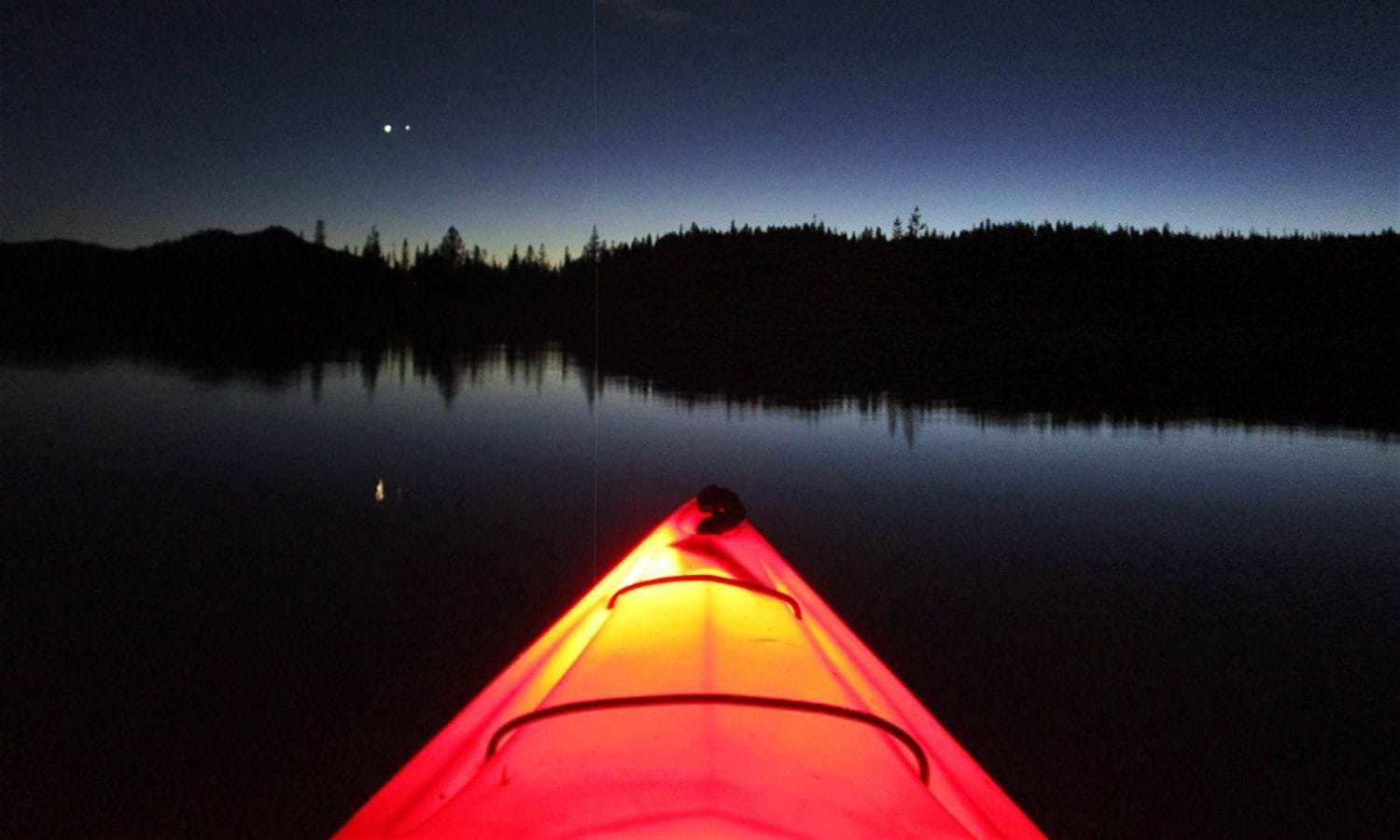 Drifting quietly, we noticed a glow began to appear above the south flank of Mt. Bachelor. First filtered through the trees and then rising into the open sky, the full moon made its appearance, giving a lunar glow to the entire area and providing just enough light to help guide us back to shore as we called it a day — and night — on this amazing Oregon adventure.

If you are traveling from Bend to Hosmer Lake, drive west on the Cascade Lakes Scenic Byway towards Mt. Bachelor. Continue around to the backside of Mt. Bachelor, past Sparks Lake, Elk Lake and beyond until reaching Forest Service Road 4625/Mud Lake Rd.  Turn left/east on Forest Service Road 4625 and drive for 1.2 miles until you reach Hosmer Lake. Park out of the way in the boat launching area. Estimated drive time: 50-60 minutes from Bend.

If driving from Sunriver to Hosmer Lake, head north on Edison Ice Cave Rd./NF 45 until you reach the junction with the Cascade Lakes National Scenic Byway just east of Mt. Bachelor. Follow the directions above once you reach the byway.

Read more about Mike & Kristy Westby’s Oregon adventures in their Oregon Road Trips books, featuring the northeast and southeast parts of the state. The books are available for purchase online.

Mike & Kristy Westby
Longtime Oregonians Mike & Kristy Westby are the authors of the "Oregon Road Trips – Northeast Edition" and "Oregon Road Trips – Southeast Edition," books that help travelers discover Oregon’s scenic back roads and byways by day, while staying in historic hotels by night. When not on the road, they can be found throughout the year exploring Oregon’s many different wonders and adventures across the state.

Bend, Central Oregon
Is any of the information on this page incorrect? Suggest an update
Ready to hit the road? Bring our travel magazine along.