Finding the Unexpected in Oakridge

A few years ago, I saw a video about a small town outside of Eugene, Oregon called Oakridge.

There was a specific song attached to the video that I still sometimes get stuck in my head.

And then the images flash before my eyes.

So obviously, I had to go.

When I pulled into this quiet town I was both mesmerized and blind-sided by the warm welcome I received. And it wasn’t just for me. My 75 lb. Alaska Malamute sidekick was riding shotgun and honestly, she got most of the attention.

The first morning, I loaded up my car for the long day ahead before stopping at The Ridge Homestyle Cafe, where the people inside were so nice you could shake a stick at them. If you’re into shaking sticks. The waitress seemed interested in the wolf-dog popping her head out the window of my car and howling for everyone in the restaurant. She asked if I wanted an extra slice of bacon, “to go,” and gave me a wink.

After I drank enough coffee to fill my gas tank and gave Jazz the slice of bacon, we headed just east of town to Salt Creek Falls where the snow was heavy, the rain was cold, and the views were breathtaking. A short hike into the forest led us to Oregon’s second-highest single-drop waterfall pouring into a blue-green oasis of ice and snow. You hear people commenting about “photos not doing things justice” and this summed up that caption perfectly. Because you can’t experience the frozen mist landing in your hair and turning your eyelashes into icicles. Because you can’t smell the fresh pine trees and see the bald eagles circling above the initial drop.

Because moments like this aren’t easily recreated. They’re only appreciated and then talked about after the fact.

Once I was done drooling over the frozen landscape, we made our way back to town, stopping by the McCredie Hot Springs. I had a feeling we’d be needing hot chocolate for this part so I had asked the waitress at the cafe fill up my Thermos. Just in case.

Unfortunately, the recent rain and wind had blown the hot springs into the river, literally. But there were locals across the way who had found another spring and were drinking out of their own thermoses and waving in my direction.

The next stop on my list of places to go was the Willamette Mountain Mercantile where I immediate befriended Richard, who I recognized from the video I’d seen. We talked about local wildflowers, trails, the rain, and then he handed me a pair of binoculars and showed me both the back patio and the family of bald eagles living in the trees across the river. After recounting the previous night’s birds of prey tug-of-war between an osprey, the male eagle and a brook trout, Richard showed me a map in the back of the store that’s been hung, taped, glued, tacked and stapled to the wall since 1990.

Nearly the entire planet has been in to pin their hometown onto that thing and it was as full of cardboard pins as Richard was with stories about the people he’s met in the shop.

He sized me up and asked about my mountain biking experience.

I shrugged and said, “Well, the last time I rode I went head over handlebars and landed face-first in the dirt.”

Without hesitating, he replied “I’ve got the one for you.”

And that was that. In a matter of moments, I was on my way to the trail with a mountain bike that was about as tall as I am and weighed roughly the same. But never have I been a bigger fan of something so fun. I twisted and turned, I rolled and jumped. I slid and skidded to a few stops along the river and took in the first blue sky of the day. I blasted through mud puddles and fell into a few bushes but not once did the smile on my face rub off.

When I took the bike back to Richard he said it looked like I needed a beer and he was probably right. He sent me down the street to his favorite local pub, the Brewers Union Local 180. It seemed crazy to me that such a small town would have a proper English pub, but at this point in the day, I knew better than to be surprised by something that seemed so awesome. However, my surprise quadrupled after walking inside, ordering a drink and asking for not one but three plates of delicious, gluten-free pub food. 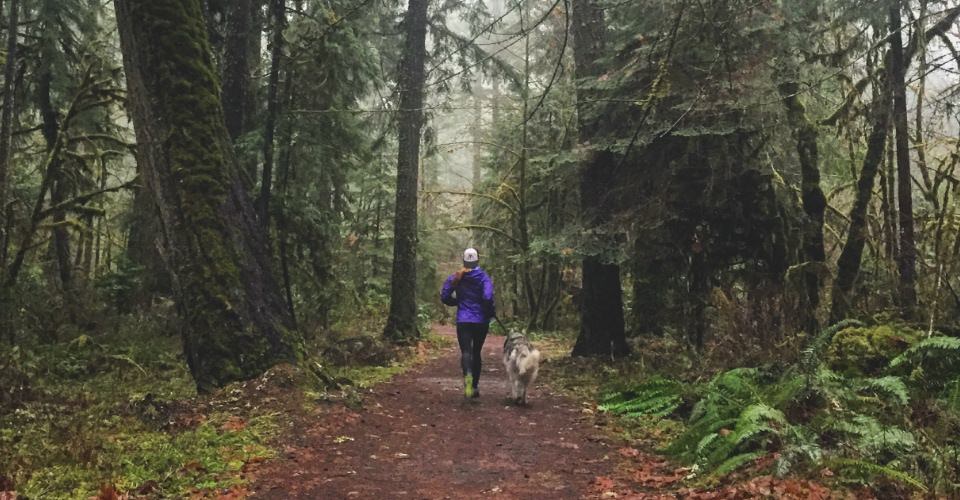 After gorging myself on the best meal I’d ever had, my four-legged partner in crime and I took off for the Alpine Trail, where we rallied and ran off the delicious post-ride meal. And again, I knew better than to be surprised, but this place was constantly surpassing my expectations. The trail was butter, the air was fresh, and 16 miles felt like 16 minutes, maybe.

But afterwards, I was hungry again.

We pulled into the driveway at the yurt we were staying at and watched the sun set from behind the trees before building a fire and making a delicious farm-to-table dinner. The rain started again and we were wiped from the day, so we pulled out some maps and started planning the adventure for tomorrow. Little did we know, it was going to be just as great as the one we’d already had. 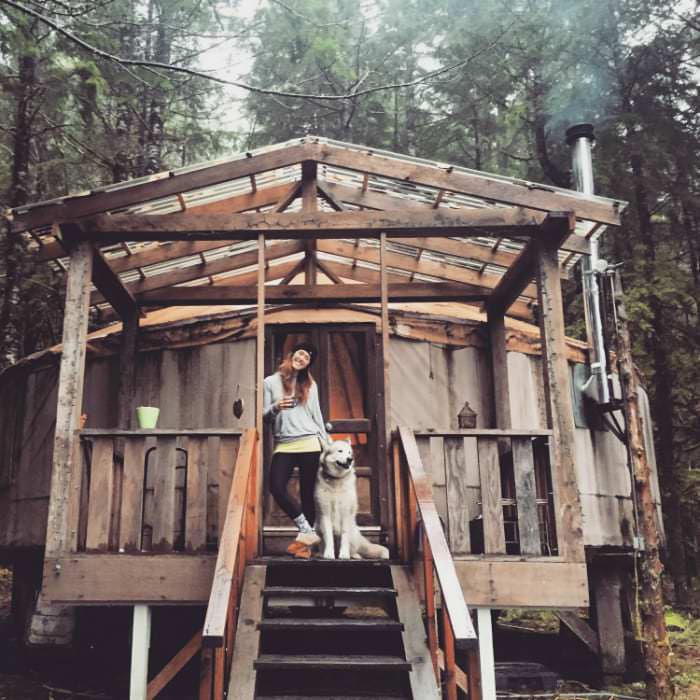 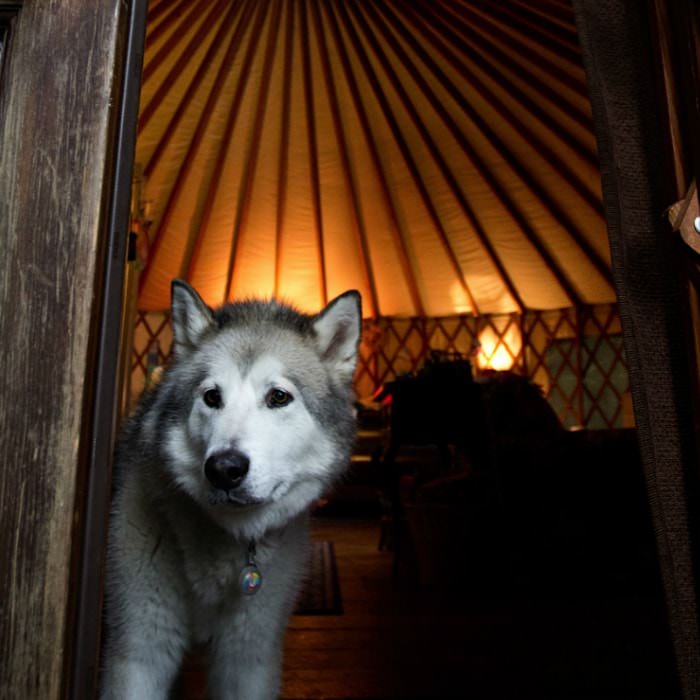 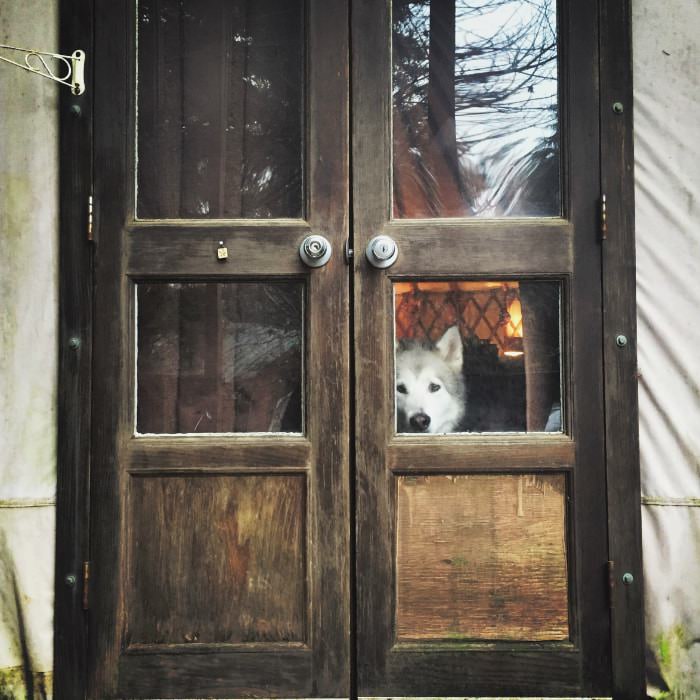 Oakridge, you stole my heart. You surpassed expectations and you provided a much-needed respite from the daily grind. From your trails to your pint glasses, from your coffee shops to your hot springs and the many friends I met in between, it’s safe to say I’ve fallen in love. And once this rain stops, I’ll be back on two wheels and ready to roll.

Watch the Travel Oregon video that inspired this journey:

Kristen Mohror
Armed with a smartphone, running shoes, and a life partner who resembles a wolf, Kristen is a dog-loving, mountain climbing, do-good enthusiast who happens to go on a lot of adventures. From 14,276 feet above the Cascades to surfing the waves of the Pacific, to running, climbing, mountain biking, sky diving, swimming, jumping, laughing and occasionally sleeping somewhere in between, Kristen pushes her luck and limits with new adventures, good people and cold brew coffee.
Is any of the information on this page incorrect? Suggest an update
Ready to hit the road? Bring our travel magazine along.