A Local’s Guide to Pride in Oregon

How to celebrate Pride Month in Portland and beyond.
Andrew Collins,  Author 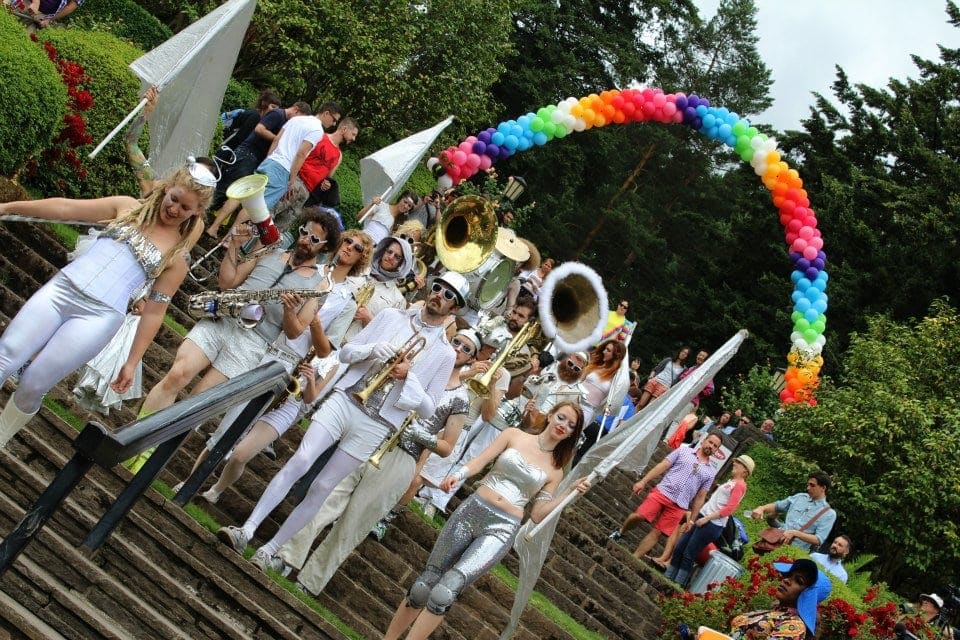 (Peacock in the Park by Lauren Palmer)

This Pride marks 53 years since the pivotal Stonewall Riots. Here’s how communities across the state are commemorating the LGBTQ liberation movement.

Second only to San Francisco in the percentage of LGBTQ residents, Portland has steadily developed into one of the nation’s most inclusive destinations. The City of Roses draws thousands to its pride parade each June, but the celebration doesn’t end at city limits. Communities all around the state honor the queer liberation movement’s history and progress with festivals that draw participants from near and far. Here’s everything you need to know about pride in Oregon, from Portland’s year-round queer offerings to LGBTQ festivities in cities from Astoria to Bend and beyond.

Portland draws LGBTQ travelers year-round due to its progressive culture and mix of queer-friendly clubs and attractions. Here’s what you need to know, whether your visit coincides with pride festivities or not.

The city has no specific “gay district” — folks live, work and play in virtually every neighborhood, although the West End (sometimes referred to as the “Pink Triangle”), Old Town, North Portland, Hawthorne/Belmont and the Central Eastside have a particularly pronounced LGBTQ presence.

It’s no surprise that you’ll find a diverse and vibrant queer-nightlife scene, including nearly a dozen gay bars and dance clubs (Stag, Scandals, Crush Bar, CC Slaughters and Eagle Portland are among the favorites), many monthly dance events (Slay, Blow Pony, Lez Do It, Bridge Club and CAKE, just to name a few) and a slew of queer-friendly venues that draw mixed crowds. The city is even home to the oldest drag revue on the West Coast, named for America’s oldest and longest-performing drag queen: Darcelle XV Showplace.

The city is also home to dozens of businesses owned or heavily staffed by members of the LGBTQ community, from spots like tomboy-chic clothier Wildfang, underwear shop UnderU4Men and urban winemaking operation Hip Chicks Do Wine to numerous restaurants, including Irving Street Kitchen, Saucebox, Little T Baker and Departure. 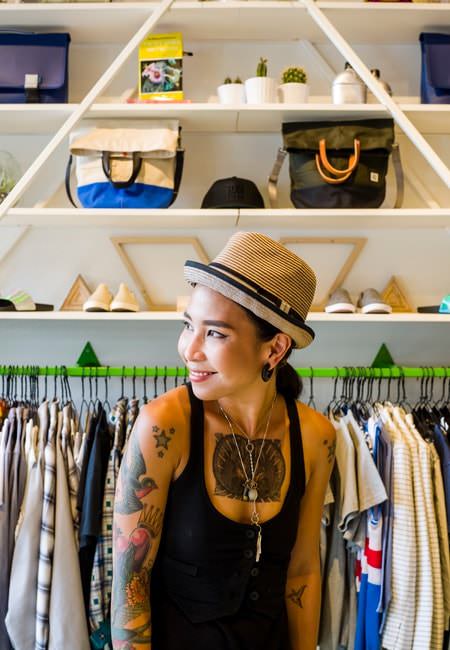 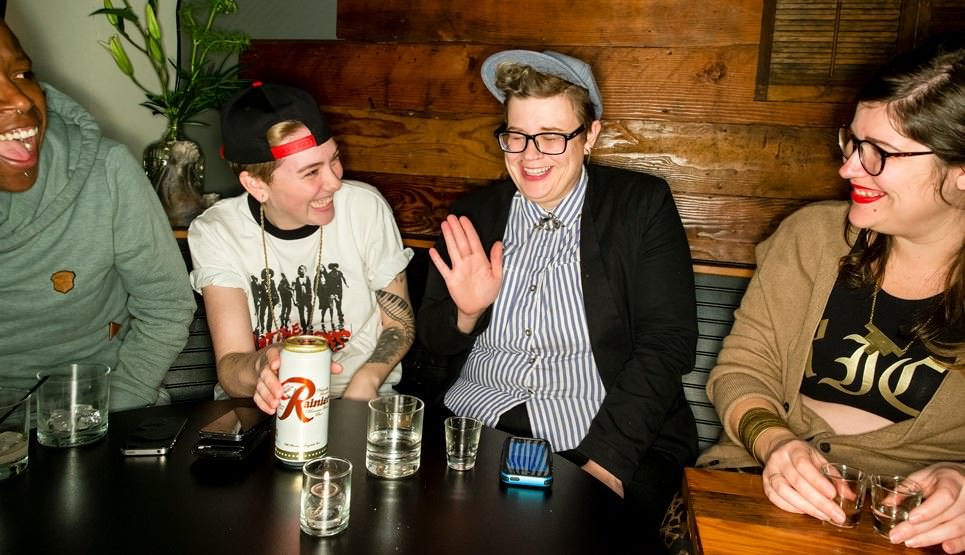 Scheduled for June 18-19, 2022, the Portland Waterfront LGBTQ Pride Festival and Parade draws thousands to the festival grounds at leafy Tom McCall Waterfront Park. Over the course of the festival, local and national musicians entertain the crowds, a number of artisan food and craft-beverage vendors provide tasty snacks and drinks, and dozens of supportive businesses, organizations and resources dispense information. On Sunday the Portland LGBTQ Pride Parade snakes through downtown, the Pearl District and Old Town.

Other key events throughout Pride Weekend include the Portland Trans Pride March; the Portland Dyke March; a rollicking block party on Southwest Stark Street outside Scandals gay bar on both Saturday and Sunday; and the hugely popular Gaylabration party on Saturday night. Usually on or near Pride Weekend, there’s also traditionally a special installment of Blow Pony, the city’s sassy and spirited monthly queer dance party at Bossanova Ballroom.

Later in the summer, the PDX Latinx Pride comprises several days of cultural and social programming — from poetry readings to a salsa dance party. This jubilant celebration typically takes place in July or August.

Other annual events in the city well worth checking out include the Portland Queer Film Festival in mid-September, with most showings at the indie-spirited Cinema 21, and QDoc, the world’s only film festival dedicated to LGBTQ documentaries, which is held in May at the historic Hollywood Theatre. Also in May, people of all genders and orientations don red dresses — often highly glamorous ones — to attend an annual fundraising gala, the aptly named Red Dress Party, proceeds of which benefit the Bradley Angle House and Q Center. And in June, Peacock in the Park is a joyful, family-friendly dance and drag extravaganza and scholarship fundraiser held in the open-air Washington Park Amphitheater.

Oregon’s reputation as a diverse and LGBTQ-friendly state extends to many communities outside Portland, from the Coast to the Cascades. Held throughout the year, smaller pride festivals provide a terrific opportunity to visit different parts of the state.

Head to the outdoorsy city of Bend on June 25, 2022, to attend the Central Oregon Pride festival. This laid-back and friendly festival features an afternoon of music, food and mingling at downtown’s verdant Drake Park, which fringes the Deschutes River. This year brings the addition of an inaugural 5K fun run/walk on June 25 to celebrate pride and inclusivity.

Astoria Pride comprises three days of gatherings in June throughout this historic and picturesque small city at the confluence of the Columbia River and the Pacific Ocean. Festivities typically include a parade along Astoria’s scenic river walk, an art show, a special LGBT Astoria Riverfront Trolley tour, an art show, dance parties and more.

On the Southern Oregon Coast, a Pride flag is flying over the city all month long and the community is celebrating two years of advocacy, growth and visibility.

The state’s third-largest city plays host to the Eugene/Springfield Pride Festival on August 13, 2022. After Portland, Eugene has the largest and most visible LGBTQ community in the state. It’s also home to one of the state’s only gay bars outside of Portland, Spectrum, which is a welcoming spot for drinks or a meal anytime — but especially during pride. The Eugene/Springfield Pride Festival takes place at the scenic Alton Baker Park along the banks of the Willamette River. Watch a diverse mix of bands and performers, chat with local LGBTQ-supportive businesses and organizations at a vendor expo, and sip craft brews in the beer garden.

Also held along the Willamette River, typically in early August, Capitol Pride draws locals and visitors to the state’s capital and second-largest city, Salem, for a lively day of entertainment at Riverfront Park.

New for 2022, what’s billed as the world’s first Queer Wine Fest will be held at Remy Wines in Dayton (June 24, 2022). The outdoor festival will include wine and food tasting with live music, featuring queer-owned, -made and -grown wines.

Throughout the month of June, the public is invited to enjoy Rainbow Quest, with 53 local coffee shops, wineries, restaurants, bars and retailers in Yamhill County that will be offering Pride-inspired drinks, food and products.

The wine fest, street fair and Rainbow Quest are all part of Wine Country Pride, an inclusive celebration of the LGBTQ+ community in the Willamette Valley. Wine Country Pride seeks to be a visible celebration of the queer community and to educate all people while connecting through community building and economic activity. Check the website for the full lineup of events, involving yoga, drag shows, a car parade and picnic, brunch, dinner and of course wine.

Wine Country Pride was founded in 2020 by a group of friends and business owners including Remy Drabkin, owner of Remy Wines and newly elected as the first queer mayor of McMinnville.

If you’re up for an all-inclusive adventure, sign up to join the Pride Outdoors Regenerative Tour (June 18-19, 2022) hosted by First Nature Tours, the only LGBTQ+ owned outdoor tour company in Oregon. This safe, welcoming and sustainable event will include a tree-planting and biodiversity tour at Left Coast Estates; a guided kayak tour along the Willamette River with eNRG Kayaking; a  dinner at Left Coast that supports Wine Country Pride; and lodging at the Independence Hotel.

In Southern Oregon, Medford Pride 2022 welcomes members and allies to a celebration at Pear Blossom Park on June 11, 2022, and the city of Ashland celebrates with a Southern Oregon Pride Parade in October. 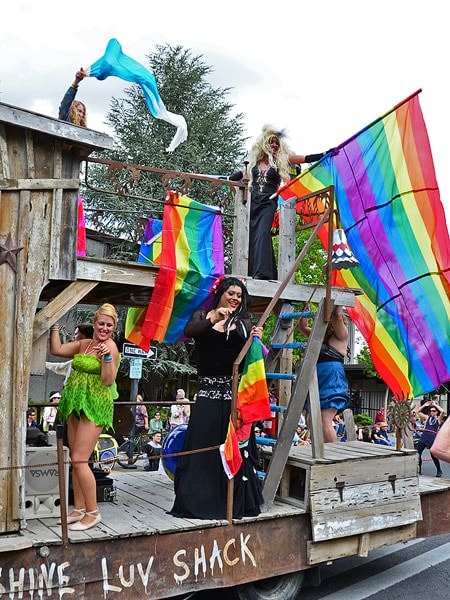