Musick Guard Station is located in a remote setting in southwestern Oregon, offering visitors a glimpse into a historic mining community in Umpqua National Forest. Situated atop a narrow forested ridge between Fairview Peak and Grouse Mountain, the guard station and outbuildings were constructed by the Civilian Conservation Corps in 1934 to provide fire protection to the Bohemia Mining district.

Listed on the National Register of Historic Places, Musick Guard Station became an important public contact point and administrative center for the Forest Service. Later it was used as summer barracks for trail crews and firefighting crews. The Guard Station was named after the nearby Musick Mine, a major gold producing mine in the late 1800s and early 1900s.

Today the guard station continues to offer visitors a unique lodging experience and plenty of opportunities for relaxation and recreation.

This site is located in National Forest System lands. These sites are popular with the recreating public so you may find visitors interested in the area and the facilities. While you do not have to let them inside the facility they are allowed to be in the area.

For hiking and sightseeing, the nearby Bohemia Mountain Trail leads up a steep grade to the rocky summit of Bohemia Mountain, the highest point on the Cottage Grove Ranger District. Just east of the summit along a ridgeline hikers will be treated to dramatic views of the Cascade mountains and a wildflowers blooming along rocky outcrops and bluffs in late June through early August.

For history buffs and fortune seekers, Musick Mine, one of the most productive gold mines in the district during the late 1800s and into the early 1900s, is a point of interest not to be overlooked. The area is named after James “Bohemia” Johnson, a mountaineer and prospector, who discovered gold-bearing quartz in 1863. The discovery created much short-lived excitement in the valley, but settlers soon realized the gold had to be extracted from the rock by machinery, not panned from the many streambeds, and by 1910 most of the ore had been removed. Some mining continues today.

The main floor of the two-story guard station features a central room with an adjoining kitchen and bedroom. The upstairs bunkroom provides additional sleeping quarters. It is furnished with two double wooden platform beds and four bunk beds without mattresses, a table with chairs, a wood stove for heat, and wood cook stove and oven. Outside, a picnic table, campfire ring, and vault toilet are provided. An area for pitching a tent is also on site.

There is no refrigerator, water or electricity available at the site. Guests must bring water necessary for drinking, cooking and washing. Guests must also bring a lantern or other reliable light source, cooking utensils, sleeping bags, sleeping pads, towels, dish soap, matches, cooking gear, toilet paper, first aid kit and garbage bags. Firewood may be available, however the supply cannot be guaranteed, and guests are encouraged to bring their own.

Musick Guard Station is surrounded by rugged summits up to 6,000 feet in elevation, and steep, heavily forested slopes of fir, spruce and hemlock.

Nearby Fairview Peak, located in the heart of the Bohemia Mining District at an elevation of 5,933 feet, provides an excellent panoramic view of the surrounding area. On a clear day, the Cascade Range peaks can be viewed from Mt. Hood to the north and Mount McLoughlin to the south.

Large mammals such as elk, deer, black bear, and cougar, as well as the smaller residents like squirrels, fox, raccoons and bats, are supported by the area’s diverse forest habitats.

Visitors may want to take some time to visit nearby Crater Lake National Park for a glimpse into the area’s fascinating geological and cultural history. 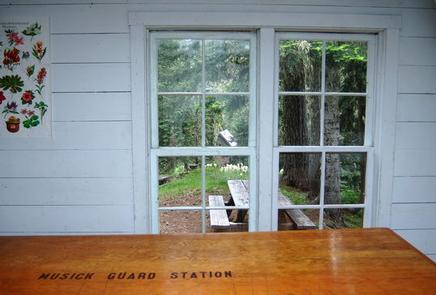 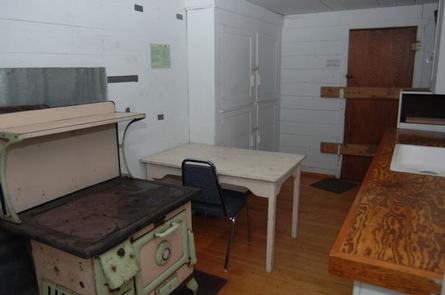 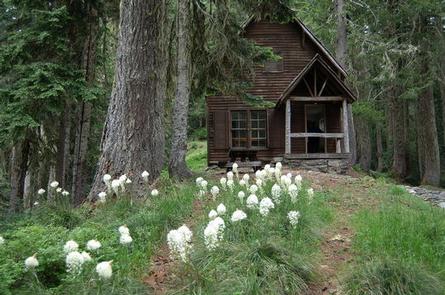 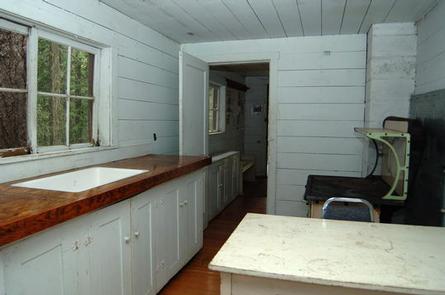 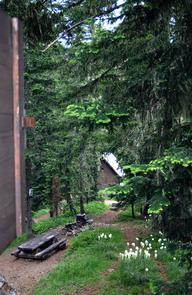 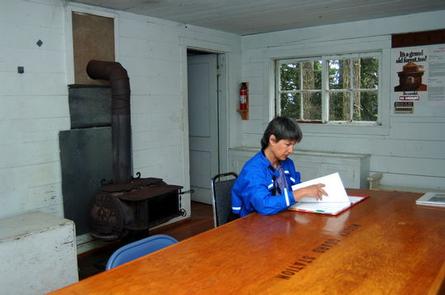