After riding both the Willamette Valley and McKenzie Pass Scenic Bikeways over two weeks, we needed a bit of a rest. Since we had friends who had recently moved to our favorite adventure town, we spent a week in Bend playing — hiking, paddleboarding, running, eating, drinking beer and swimming. The time off allowed us to rest our tired legs. Now we were ready to hit the road back home to Portland via the Cascading Rivers Scenic Bikeway.

The warm, sunny weather decided to stick around, promising long summer days and plenty of views. 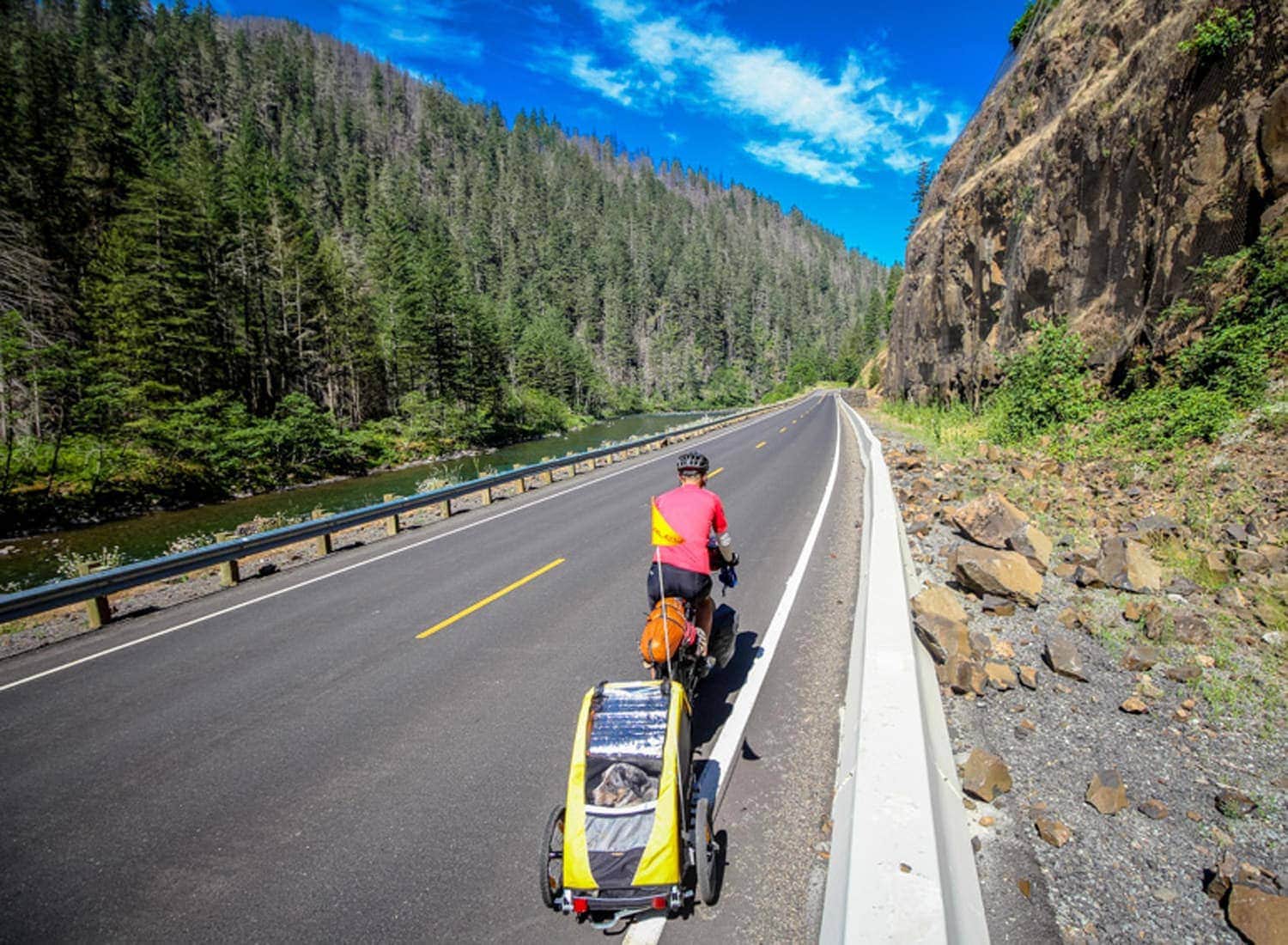 We attempted to depart Bend early to beat the heat, but when our friend Chelsea offered to make quinoa pancakes, well, we couldn’t say no to those. Bellies filled, we followed the Deschutes River Trail out of Bend toward Tumalo Park and set off toward Sisters.

While Hwy 20 wasn’t our favorite road on which to cycle (due to traffic), the shoulder was plenty wide and the views between Bend and Sisters are some of my favorite along any route. Wide-open fields open up to views of the Three Sisters, Broken Top and Three-Fingered Jack for much of the ride. I was slightly worried about drifting into traffic from rubbernecking to see the views.

We arrived to Sisters in time for lunch and stopped at our favorite park: Village Green City Park, where we filled our waters. Then we grabbed burritos and provisions for the next couple meals from Sisters Market & Eatery.

From Sisters, we seemed to fly to The Suttle Lodge, arriving in the early afternoon, leaving plenty of time to explore and relax.

Our rustic cabin was super cozy and could squeeze in six people with a futon and bunk beds. The deck and chairs made a perfect spot to eat our dinner.

Shortly after arriving, we considered stand-up paddleboarding, but the winds had picked up and we were pretty certain us newbies would fall in with one strong gust of wind, so we opted for a walk around the lake path instead. The easy three-mile loop offers beach access in some spots and plenty of views of Mt. Washington.

To say The Suttle Lodge is dog-friendly is an understatement. We found happy dogs around every corner. They were welcome in all outdoor areas and inside the restaurant and main lodge. The owner and staff have a few dogs they bring to work with them, which just means puppy play time all day, every day. The Suttle Lodge was undoubtedly the most dog-friendly accommodation we have ever stayed.

After our morning dosage of doggie love after breakfast, we set off for Detroit Lake and the starting point of the Cascading Rivers Scenic Bikeway. Again traveling along highways, we felt mostly comfortable alongside the cars who gave ample room when they could. Construction work along the route meant for long breaks without cars and slower moving traffic.

If the previous day’s ride was guided by the South Sisters, this ride was led by Mt. Washington. For at least half of the ride, we had full on views to our left of the peak, stopping at a rest stop for a photo op. 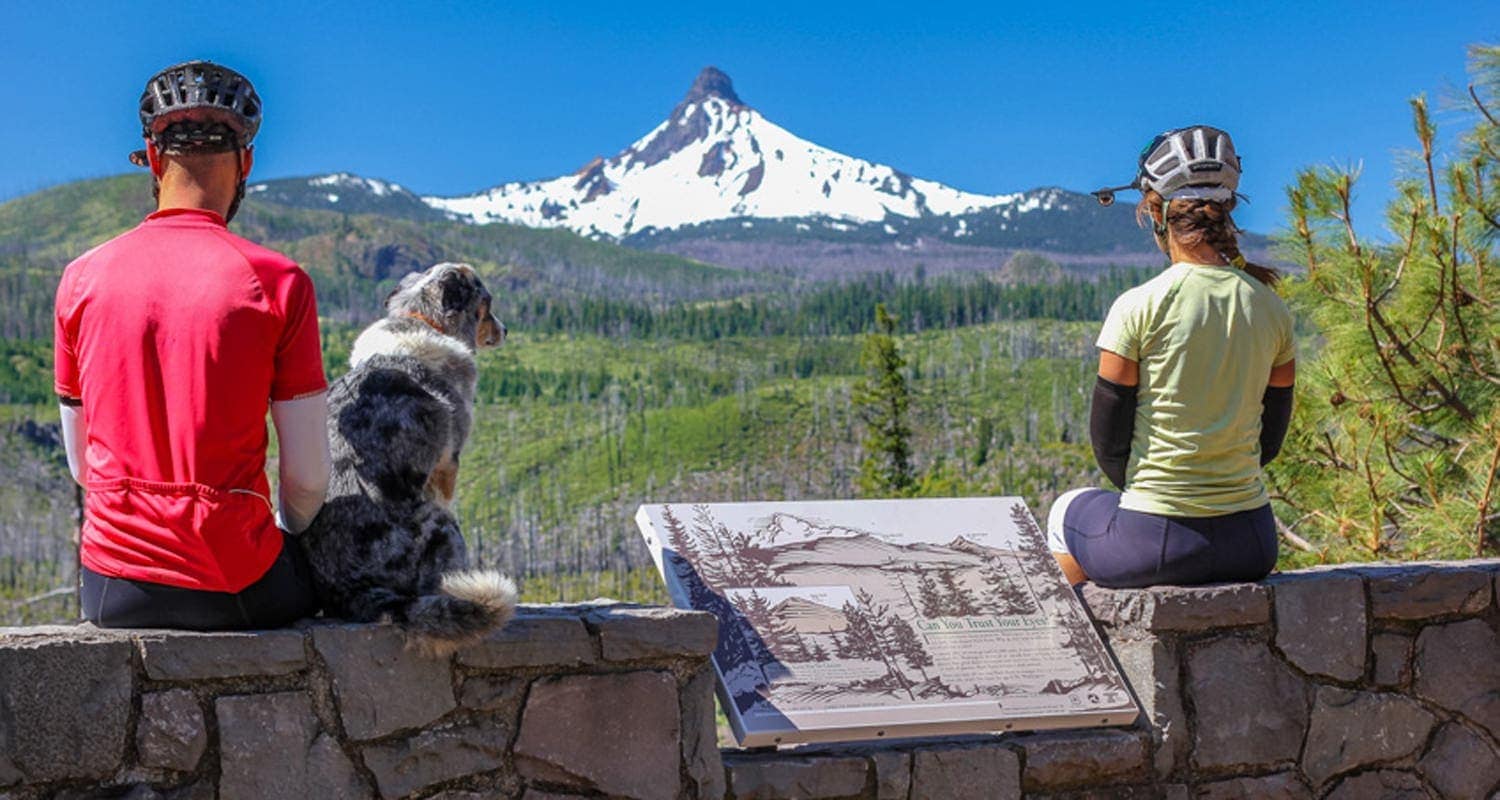 I had mistakenly thought that the ride would be mostly downhill, and it was…after a very long uphill climb to the peak of the Santiam Pass that took most of the morning. Famished from all that climbing, we pulled over at the Lost Lake Campground for some lakeside dining. There are no services along this route and the only place we found to refill our waters was the Marion Forks Hatchery, about two thirds of the way to Detroit.

A small town of just 202 people at the time of the last census, Detroit has a lot to offer in terms of amenities. There were several pubs and restaurants, plus two small grocery stores. Vegan and fresh produce options were limited, so we got creative and assembled ingredients to make burritos at our campsite.

Hoping to find a hiker/biker option at the Detroit Lake State Recreation Area, a massive campground with 300 sites. We were disappointed to learn there was no designated spot for cyclists, but were happy to be directed to the tent spot with one of the best views of Mt. Jefferson. We walked along the lakeside trail throughout the park as I patiently awaited golden hour to set over Mt. Jefferson for a photo op. After snapping my photo, I headed straight to bed, exhausted from the tough riding over the previous two days. I knew the start of the Cascading Rivers Scenic Bikeway would be difficult as well, with a steep hill looming over my thoughts. 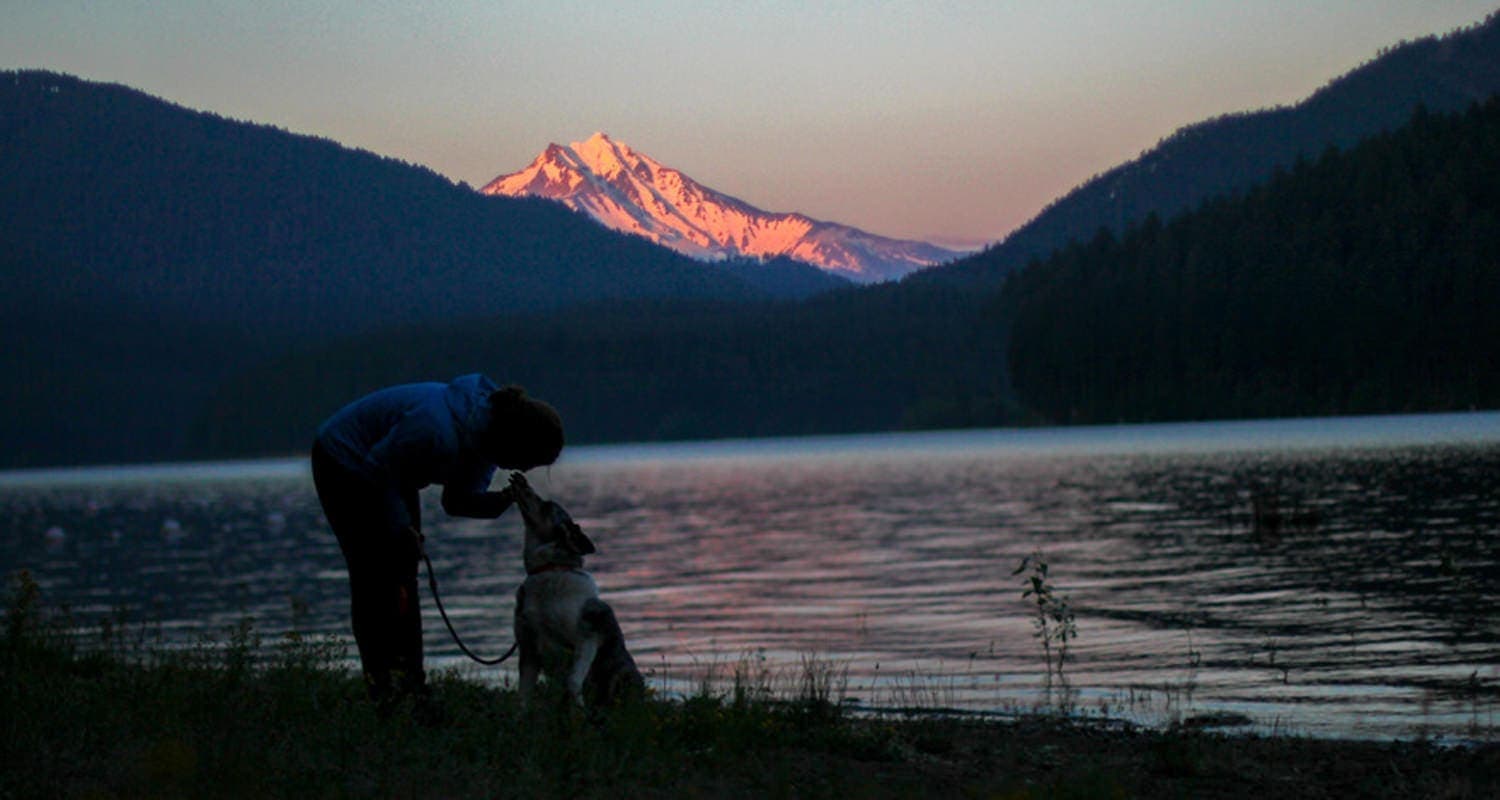 After two days of riding alongside cars, the start of the Cascading Rivers Scenic Bikeway felt almost eerily quiet. The tall pines cast long shadows across the road, blocking the sun from beating down on us for most of the day. Bright pink foxgloves and purple lupine lined the roads, escorting us along the gradual uphill.

Only the night before we had commented on the fact that we haven’t had to push uphill once during this trip. Of course, as soon as we met the steep grade 16 miles in, I was forced to dismount and push the short, but steep uphill.

We rejoiced over our efforts after reaching the summit and for the upcoming downhill. I pointed my bike down and flew. My shirt flapped like a butterfly in the wind, a welcome feeling after the difficult exertion.

Knowing our one and only food option on the route was the Ripplebrook Camp Store, we stopped in to purchase some very basic provisions and inquire about camping. After learning that our water options were limited and campgrounds were mostly full, the ranger indicated that our only option was six miles down the road. Defeated from three days of tough climbs, the thought of mounting my bike for even a quarter-mile seemed difficult. We downed an entire bag of tortilla chips before setting off and I sulked the entire way to Indian Henry Campground.

My attitude changed once we arrived. There were few campers, we had a spot right next to the river, and it was quiet. Ghost-like, an amphitheater and entire section of the campground were completely abandoned with moss taking over picnic tables, while trees completely crushed others. It was a clear vision of what happens when we allow nature to do her thing. 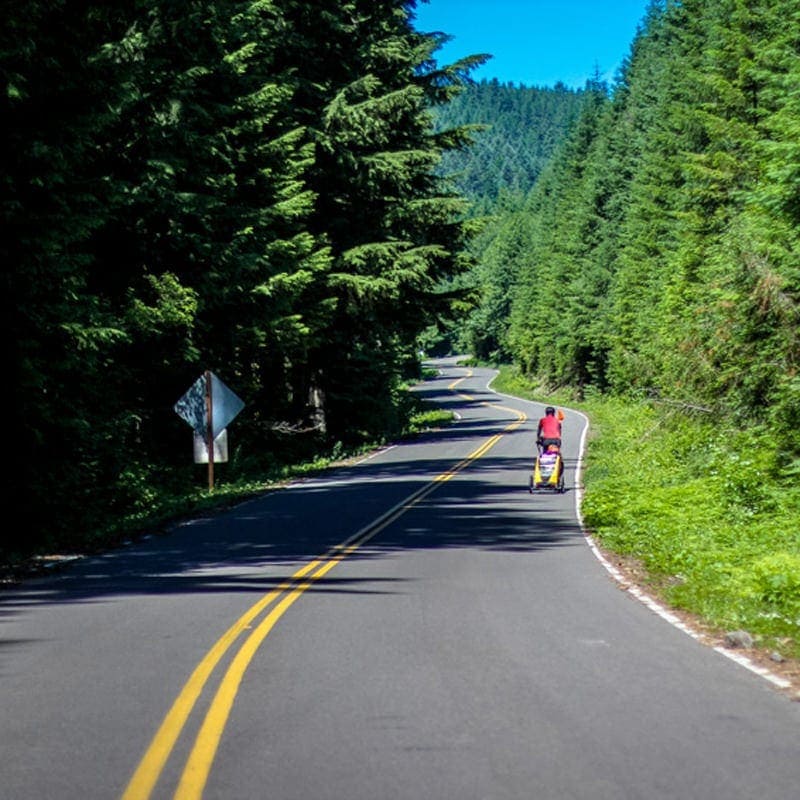 Heading back toward civilization felt strange, even just a few days after leaving Bend. The cars multiplied, the road widened and the trees had been cleared for houses. We missed the serenity of the quiet roads, small-town grocery stores that forced us to be creative for meals, and the lack of cell connection.

After summiting a surprisingly steep hill, we rolled into the cute town of Estacada, where a bike information board complete with a water bottle filling station, wifi, whimsical bike racks and maps provided all the information we’d need to know about the town and the route itself.

Famished, we pulled up to Bloom Cafe & Flower Shop and sat out on the pet-friendly sidewalk patio where we devoured vegan wraps and coconut milk peach smoothies. With full bellies, we headed to the Harvest Market, a well-stocked grocery store that felt almost overwhelming to us after having to pick from just a few options in smaller towns. We purchased provisions for dinner and made our way to Milo McIver State Park where we’d spend the evening.

A lakeside trail behind some houses led us directly into the park, avoiding another steep hill. We had the hiker/biker meadow completely to ourselves, including use of the covered picnic table, lockers and electrical outlets. This hidden gem of a park features Clackamas River access, lake access, heaps of hiking trails and a 27-hole disc golf course — all within a day’s ride from Portland.

After nearly a month on the road, we were ready to be back in Portland and trade our bikes for some hiking boots to explore the mountains. After finding a squirrel who munched apart my breakfast apple and our rice cakes, we decided to head to Estacada’s famous Harmony Baking Co. for a big breakfast before hitting the road. Though the menu is not inherently vegan, we worked with the friendly staff to create a giant scramble overflowing with potatoes, veggies, spinach and avocado.

The ride to Portland was fairly easy, just a quick hop over to the Springwater Trail, 10 or so miles outside of Estacada. Just one 2.5-mile hill sat in our way of flat car-free riding from Boring to Portland. 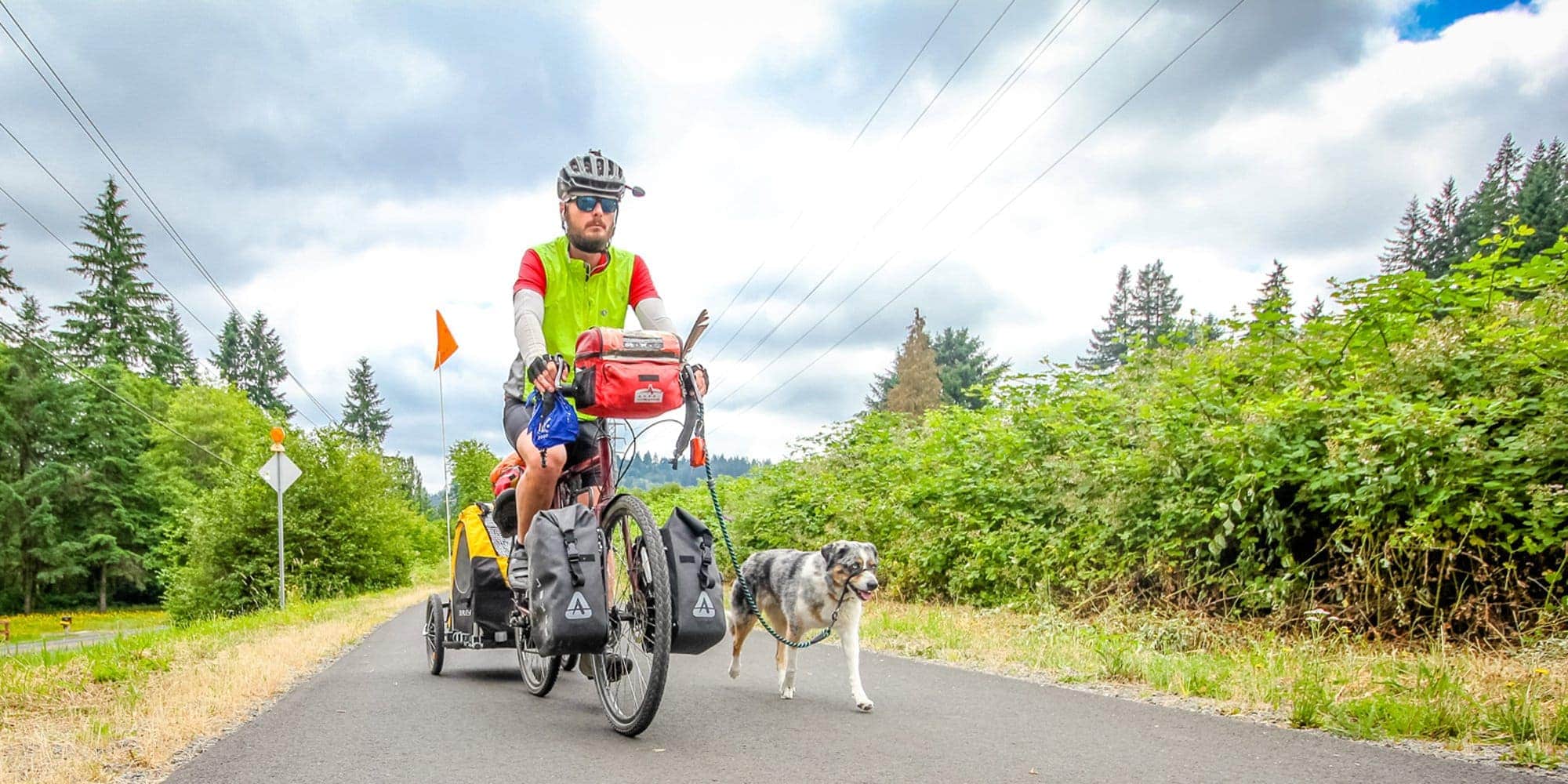 Our reward for finishing completing the climb was the Liepold Farms Fruit Stand at the top of the hill. We parked our bikes and asked Sora (our pup) to make some room for blueberries and raspberries in the trailer before going on to our most anticipated stop of the day: Boring Brewing, a small nano-brewery born from a garage, now located in Boring’s tiny commercial strip, but about to move over to a larger location in Sandy. We went for a sample tray and loved the Farmhouse Ale and the RyePA. We were even allowed to bring Sora inside the tasting room! The owners informed us of a great taco food truck just around the corner, so we wandered over there to grab a couple burritos to eat in the park before hitting the Springwater Trail back to Portland. 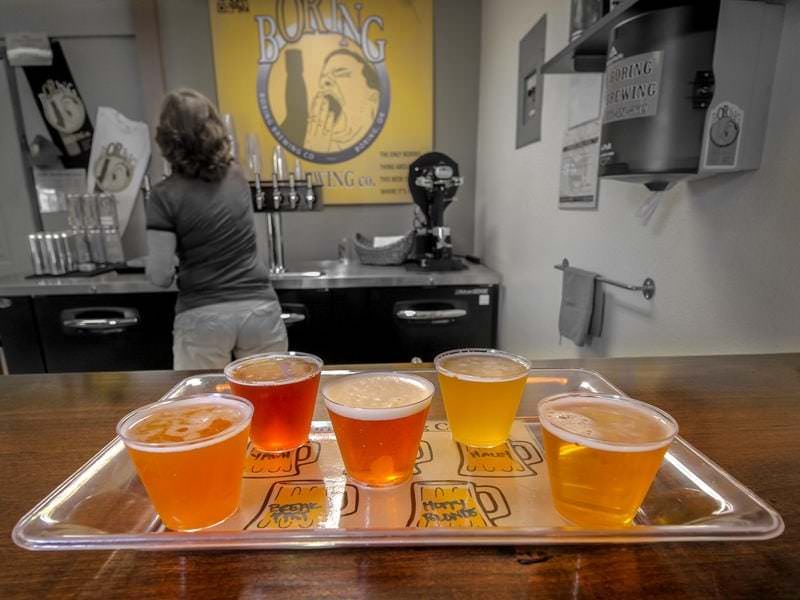 A warm, sunny summer weekend day, the trail was filled with cyclists, runners and families walking the paths. With no hills and few stoplights, we flew the remaining miles back to Portland, where we met with friends and celebrated our journey with beer and our favorite vegan dog-friendly restaurant, The Bye and Bye, to which we rode our bikes, of course.

Jen Sotolongo
Jen Sotolongo is the storyteller and photographer behind the adventure travel blog Long Haul Trekkers. From 2015-2017, Jen traveled the world by bicycle along with her partner, Dave, and their dog, Sora, a rescued Australian Shepherd. When she's not adventure cycling, you can find her running long distances in the woods or hiking in the mountains. You can follow her on Instagram @longhaultrekkers.